Bacon combines 16-bit nostalgia with the magic of shades, beards, and a man’s love for greasy food. Players must balance managing their burger shop while fending off waves of angry gang members looking to pick a fight. Decisions will include choosing between purchasing a minigun that spits 300 rounds a minute or adding fish and chips to the menu. Follow the tale of Douglas and Adams, better done with a buddy, as they pursue their dream of selling the best burgers in town. The duo also help fight crime as a bonus. They will shoot, brawl, and serve through four grueling weeks of violence that threatens to close Bacon’s doors forever. Features Days of meat filled violence 2 different playable characters (Melee or Range) 2 player local co-op Equipable weapons and traps Different customer types, bless them Diverse gangs Challenging Boss fights At least 1 meat pun Follow us, on Twitter, FB or Instagram: @baconburgershop, for more information

Thanks for voting and helping Bacon: Two Cops and a Burger Shop on it's quest to become the 2022 Indie of the Year. You are now in with a chance to score some free games. Help this game secure more votes by embedding the widget (or link) we have included below on your favorite sites. 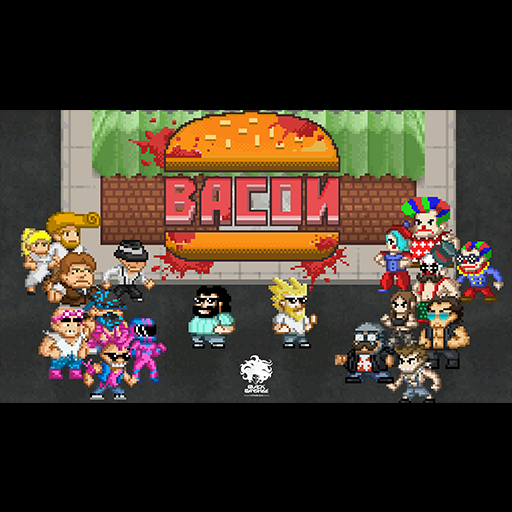 This build is a prototype that was presented during OrlandoiX 2017. The build was made with the intention of being played in short sessions to allow players to feel what the game is about. The content of one week in game was condensed to just one day. Two characters, 3 weapons, 3 traps, 4 gangsters and their Boss are present. There are known bugs that we are working to fix: Adams losing inputs, Bathroom AI Blocked, Boss movement exploit. To play this game, download the zip file, unzip and execute the Bacon.exe. That being said, feel free to give it a whirl.

Bacon allows for two players to enjoy the game on one computer. The screen splits where one player uses the mouse & keyboard and other a controller (Xbox). Work together to ensure each others survival while competing for the higher score.

The Misadventures of Timmy Arcade