Augustine is a future first person shooter. It features Multiplayer, Single player Campaign, and many different Game modes as well as a Custom game mode creator.

Throughout the game, players will encounter 3 different races

An alien race that is out to destroy of what remains of the Human race.
Past wars on earth have caused hatred between themselves and the Humans.

A race of dark beings, that really aren't too well known.
They sweep through the universe ripping apart and consuming life
around the universe to expand their race.

Earth had been taken from them and they are fighting for survival in space.
If they don't play their cards right, they could face extinction.

After escaping from Earth, the humans realized that the end was nigh for them. Escaping with mere basics, survival of the fittest wasn't looking good. They needed more resources, but they knew the Incondites would start looking for the runaway them eventually so they had to act Fast. If the humans were to be attacked now, they would be merely defenseless. Back on Earth, a man had an idea to enhance the human being for War, but the idea was rejected due to many considering it immoral. The idea was very doable. This idea could possibly give the human race a chance at survival. a few remaining Scientists started gathering data and conducting tests on several patients. They decided to fuse Human DNA with that of an Incondite. After a few days, the tests were partially successful. A couple of the test subjects had died from not being able to handle the changes internally, but the rest came out alive. Standing tall stood the new addition to the Military: Super humans. They could jump like no other, Punch like no other, and run like no other. Hope was given to the remaining Humans. They were then put into intense training over several weeks.
As recources were being searched for and Super humans were being trained, they started to pickup a faint signal. That signal was that of an AI. AI were very valuable due to their knowledge of space, races, recources, planets, and weaponry. This was a gold mine. This AI was now the target for the Humans. Find it, and get information on resources. That's when your story begins.

I'm so excited to show some new things for Augustine right now. The game has been progressing up and down with team members coming in and out periodically, but I've stayed with the game for the most part. First off, I would like to say sorry to all the followers for no constant updates. Life gets pretty hectic when your in your senior year.

Anyways.. Let's start off this update with a new AI system! I have wanted to implement an AI system into Augustine for a while (Not using pre built AI like frikbot and quake monsters). Now I made it happen. After a week and a half of coding everyday, Augustine AI has been born.. These Ai are fully controllable by myself in the code, and feature:

So here is a little demonstration of the base AI.


The AI is subject to change in various ways and be improved. What you see in the video is the base/engine of the AI. From what you saw there, many different variations of the Ai will come to be in Augustine.

Next off, You may have noticed the HUD. 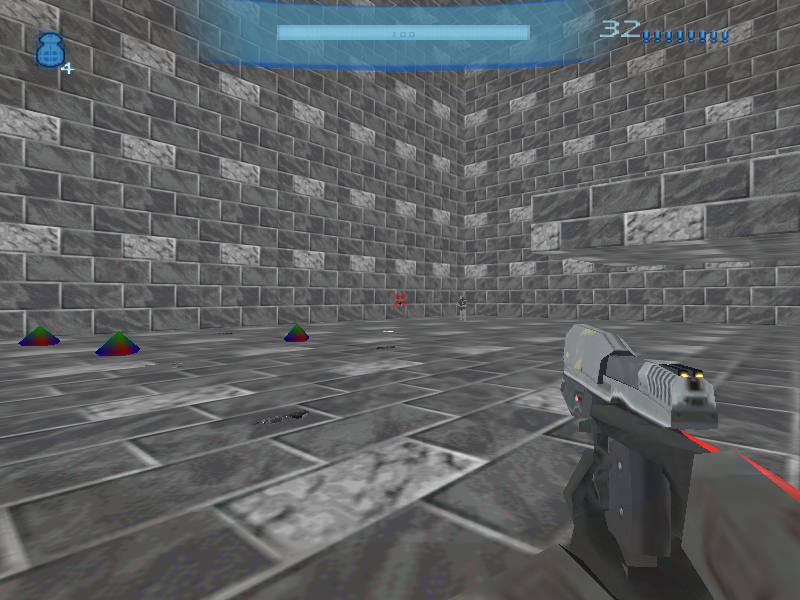 You may not see much of a difference but it has been rewritten in CSQC. It's not finished(Missing crosshairs, Radar, Scoreboard, gamemode, etc), but there is new features that weren't in the last version of the HUD. Some things look slightly better than others (*Cough* healthbar *cough*).

Since I have a grasp on CSQC(Client Side Quakec), I am going to start focusing more and more on it! It's such a wonderful feature in Darkplaces.. Let me explain a little bit of its power.

So if you have played Augustine online with other players, you may have noticed that some players get pretty high ping and server lag often (depending on how exactly you are playing online). Well I have plans to move most items over to CSQC. You may be asking, well whats that have to do with anything? Well when an item is in CSQC Rather than SSQC(Server side QuakeC), the server focuses on it less. Let's say you shoot a rocket while in an online match. The Server would normally track the movement of that rocket EVERY SINGLE FRAME. If everyones shooting rockets, expect some friggen High Ping! But if the rocket was handled in CSQC instead, the server only focuses on it at 2 points: When the rocket spawns, and when it dies(explodes). Thats alot less work for the server. Now imagine most everything being handled that way. Server lag will drastically reduce!

So basically, CSQC Will:

This all sounds good right? Great. Now all the new effects that have been added should make the game look really good! I love adding in new effects to spice the look of the game up.
Note: I updated the Darkplaces engine to its most recent so new features have opened up.


That's just some of the effects. I have spiced up various parts from the Original Augustine effects quite a bit.

Something you won't be able to see in the video, is that the new base model format is .md3. That fixes jiggly models and adds support for attachments onto models. Right now, I use third person weapons as my prime example of that. 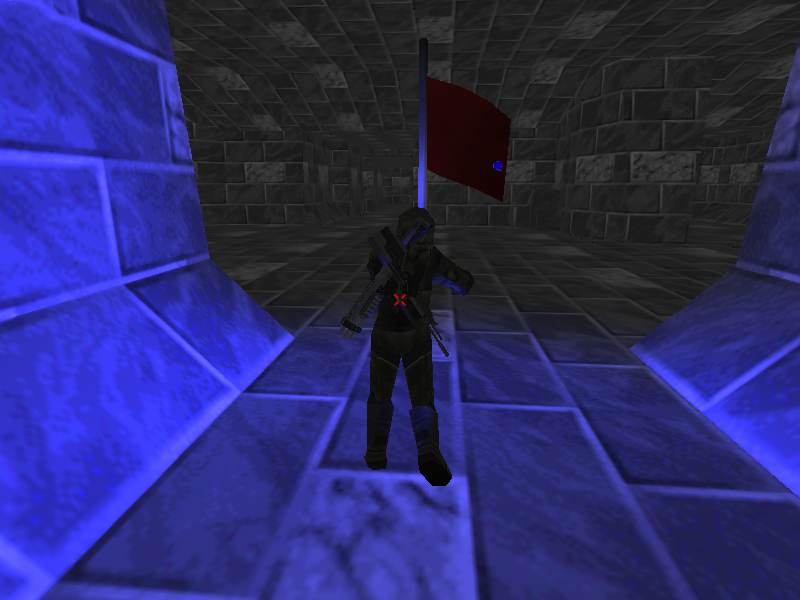 When my knowledge in CSQC expands, I will move over to IQM to take advantage of the boned model format.

I also started Creating new Player animations, but they aren't finished(Death animations are all that remains.) You can catch a glimpse of the new animations in the attachments picture. Once they are fully finished, I will post the progress.

I didn't want to show this, but heck, Why not. It is an AI idea I came up with for Augustine called a Mauler. Maulers basically go in groups and they go bunch on whatever they possibly can. They are easily to kill, but are playful, viscous, and fast. Here is my rough draft in Blender. I SUCK at modeling so don't expect a masterpiece Haha. 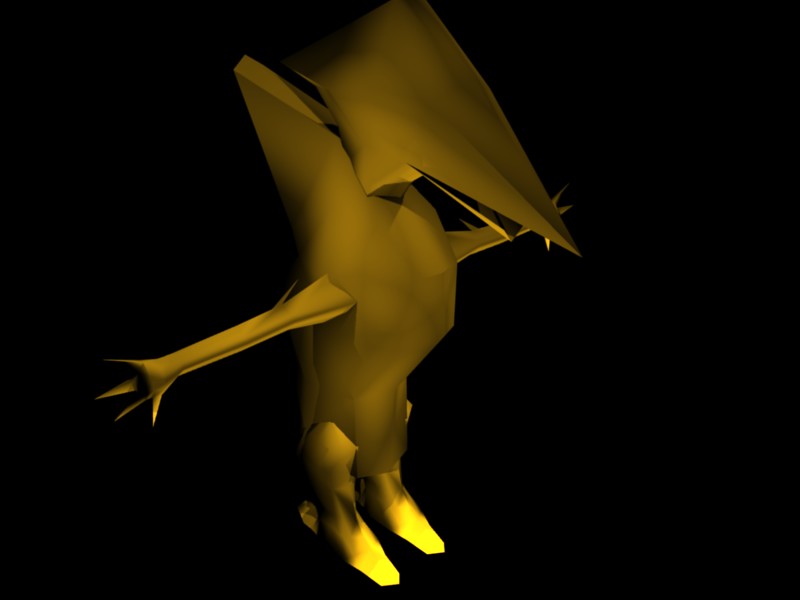 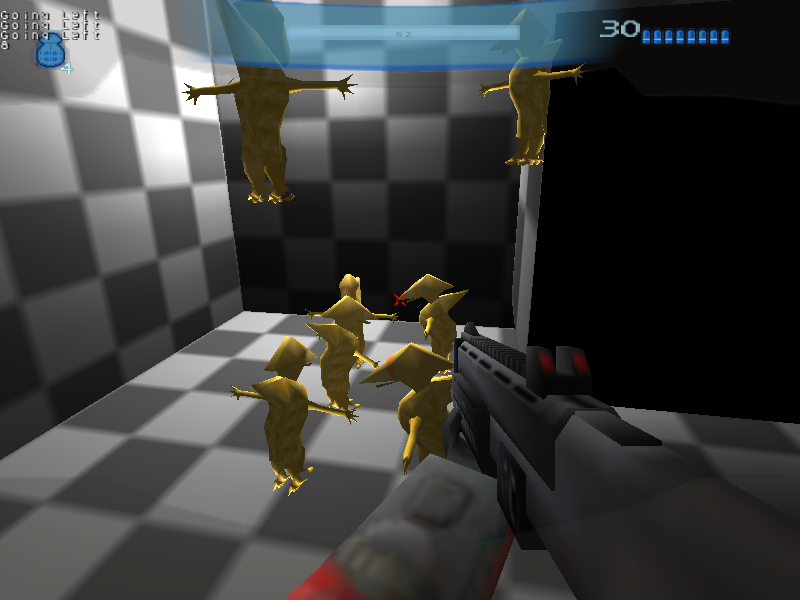 Maulers in-game. NOTE! This is a Quake 3 map with realtime lighting
Note: I fail At modeling.. But this is the basic concept of how a Mauler will look.

Lastly, I will start using Q3 maps as the base map format for Augustine. It allows for much richer looking maps, and opens up the ability to use shaders for models, and custom sizes of bounding boxes.

That about wraps up the update. I will show more details for the game as they are created like always. I would like to note, Augustine is in DIRE need of a modeler, animator, and texture artist for models. If you can model, animate, or both at a Decent level, I would love to work with you to get this game polished. I have programming covered, I just can't really model to save my life.
PM me if you are interested at all.

Remember to Track! The Audience and Feedback is what keeps me working on this game. The more people enjoy this game and await updates, the harder I will try to make this game as great as it can be.

The first beta is out! Now what?

I cover the release details and what is of Augustines future.

3 new grenades have been coded/modeled/textured and are in-game!

After some intermission time, Augustine is straightened up, and nearing completion

I hope you enjoy Augustine's first release. Lot's of work has been put into this game.

So....is this dead or you are working in mexicouger?(i understand the things u have to do in your life but will you update something?)

whats been going on here these days?

I have been working at my job quite a bit as well as being a full time student in my senior year, whilst taking care of my grandmother and still trying to have fun. All this = No spare time.

When everything calms down in a few months, I (hope) to work on my game projects again because I enjoyed it so much. My thoughts are to switch to Unity and learn it. Then I have a nice idea for a original game.

Thats whats been goin on these days!

Big update for Augustine coming soon! Lots of new stuff and ehancements to the game!

Hurray! I used to think this game died. Thanks for bringing it back Mexi :D

hmm... may no longer need shadows mod. if im correct, full augustine pc is playable through dospsp with mods. it runs quake.

anyone played shadows version on youtube? if u put solitude bloodgulch1 in, its fun.

you did that too? didn't really know anyone who does that except jomart :P

just noticed the cool turrets. it would be cool if u could hack the turrets for your team like in ratchet and clank 3.

miss the updates... nzp is on mac now. any hope for this?

Mexi and me have played countless hours in multilayer. Playing mainly different forms of infection/zombies. It is very fun and enjoyable. Out of all the FPS games I have played, (Call of Duty, Halo, etc.) this one is most addicting. I think its because you can make countless game mods and your not limited to just one map. You can literally download other Quake maps and play multilayer on them. This gives you billions of play time just from finding new maps to play on. All the choices Mexi makes…