Arkhelom 3D is a 3d shmup with insane action. It combines horizontal, vertical and side-scrolling levels, + 70 enemies types and final bosses, 22 amazing levels.
- You have a good number of ships, each with its own characteristics (speed, power,
ability to coat, heavy ammunition capacity, ...). Plus you'll be improving the
equipment of your ships with bonus points. You can improve your lasers,
missiles and achieve different droids to help you in the game. Each ship will
have different levels of evolution to be activated with items during the games.
- Your scores will be accumulated in a World Ranking.
- You can play the levels in the order you prefer. By completing a level you can choose
yourself the next level where you will play. The game's difficulty will be
increased as you play, so save your game score the maximum level of difficulty
you have achieved are reflected in the world ranking, and the ship model with
which you played.
- Every day you play you get extra bonus points. Each time you exceed your own records or
every day you stay at the top of any of the 4 world rankings get a medal and
extra bonus points. During the game items will also give you bonus points. With
these bonus points you can improve the characteristics of your ships.
- As usual in such games, items will appear that will enhance the features of the ship
during the game, improving the speed, frequency and power of your lasers,
ammunition and power of your missiles, raise your shield, points bonus and
others.
- Periodically on the website we will create new free content, such as new ships
of different features, new levels downloadable, music, audio effects and new
versions of the game engine to improve its playability.

Indie Face Kick 2:
Be In The Game

DreamSoftGames are very happy to announce a new indie game bundle: Indie Face Kick 2: "Be In The Game" (on sale from May 25, 2012)

Pay what you want starting at $1 for 3 games (Tompi Jones, Arkhelom 3D and Alien Hallway).

Beat the minimum $5 and get 5 games: The above and Depth Hunter + Alien Shooter 2 Conscription.

Support indie developers and get in the game! For an one who donates over $15 to the cause you will get your name in the credits of Tompi Jones. Our highest detonator will get to name a level or boss in Tompi Jones as well. Become a part of the game, and support your developers. Money spent goes towards polishing the current games, and releasing new ones! 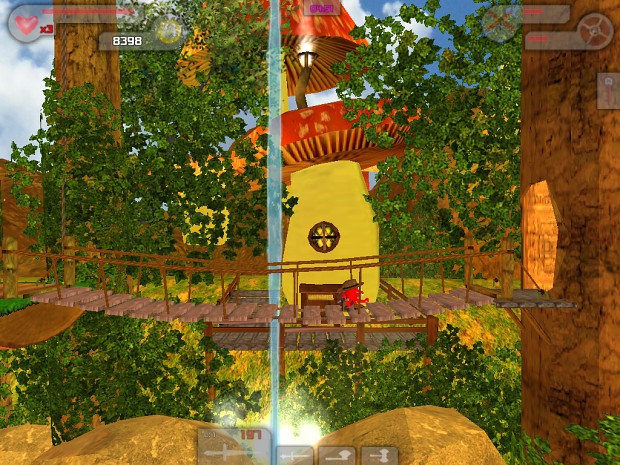 Indie Face Kick 2: "Be In The Game" will include Tompi Jones and Arkhelom 3D

A new indie game bundle is coming. Indie Face Kick 2: "Be In The Game" will include Tompi Jones and Arkhelom 3D.

"Arkhelom 3D" has been updated to version 1.38. This version include a new level: "Rock Harbor" and a new enemie.

Arkhelom 3D is a 3d shmup with insane action. It combines horizontal, vertical and side-scrolling levels, over 70 enemies types and massive final bosses...

I cannot seem to adjust the screen size (Resolution) i have gone through the game settings and the installation folder path and see no cofiguration options.

Currently the game resolution is 1024x768 my native monitor resolution is 1920x1200, and the game screen size is very small in comparison (non stretched), if i stretch it though it looks way out of proportion.

Can someone enlighten me as to how i can go about changing the resolution please.

Reaminds me of the 3D Xavious for the old Namco upright, cabaret, and cocktail Cabinet's.

Seems to have elements from the old TimePilot '84, Sinistar, and a few of the 194X games from Capcom.

Side scrollin parts look like the 3d Darius game. You need some giant mechanical fish!

how did a game so old styled get a rating past 0???

You haven't played DOOM, or Quake. I ENJOYED stuff like Heretic 2, Hexen 2, and STILL enjoy Hexen: Beyond Heretic. And I keep my CD of Terminal Velocity also.

The main factor in gaming is not how much pretty graphics there are, but how much fun I will get from it. However, I am also a Linux gamer, and I'll hold my purchase and pay full price later, when the author has Linux support.

Why the heck are you on Desura then?

Yikes. Probably the same way that many indie games are so popular. Many many people , myself included are tired of giving companies like EA 60 bucks for complete and utter garbage. Several years ago I discovered that many times an indie game provides more depth, and entertainment then any AAA title. Graphics are no where near the first thing I am considering when buying a game. Maybe it helps that I started pc gaming in a time that even Arkheloms graphics were futuristic. I hope you can overlook graphics sometime, because I know for a fact you are missing out on ALOT of amazing, memorable games.

If you rate a game on looks alone i think you are better of reviewing kids paintings..

Great comment and you deserve great praise for your C64 pic,i was a C64 games programmer and musician in the 80 's & 90's.

Always liked shmup's downloading the demo to have a feel of the game. Also the mirror link to megaupload you might want to change that with megaupload being gone and all(the mirror on the main site).

We have upgraded it today to version 1.37.

We are also modifying the site to remove the link to megaupload and simplify the web. Thank you for your interest in the game. Best regards.

Do not know who gave this game a rating of 1, but it does not deserve it!

Space - The Return Of The Pixxelfrazzer Arcade