A.R.E.S.: Extinction Agenda is the first chapter in a full featured episodic hardcore action packed side scrolling platformer, in the tradition of retro classics, where you play as Ares, a combat robot created for the sole purpose of saving humanity. Can you live up to the task or will you be reduced to nuts and bolts?

Follow our progress on these other sites as well!


It has been a while since our last update about the game. We are very happy to announce that our A.R.E.S. Extinction Agenda EX is now available on Steam. 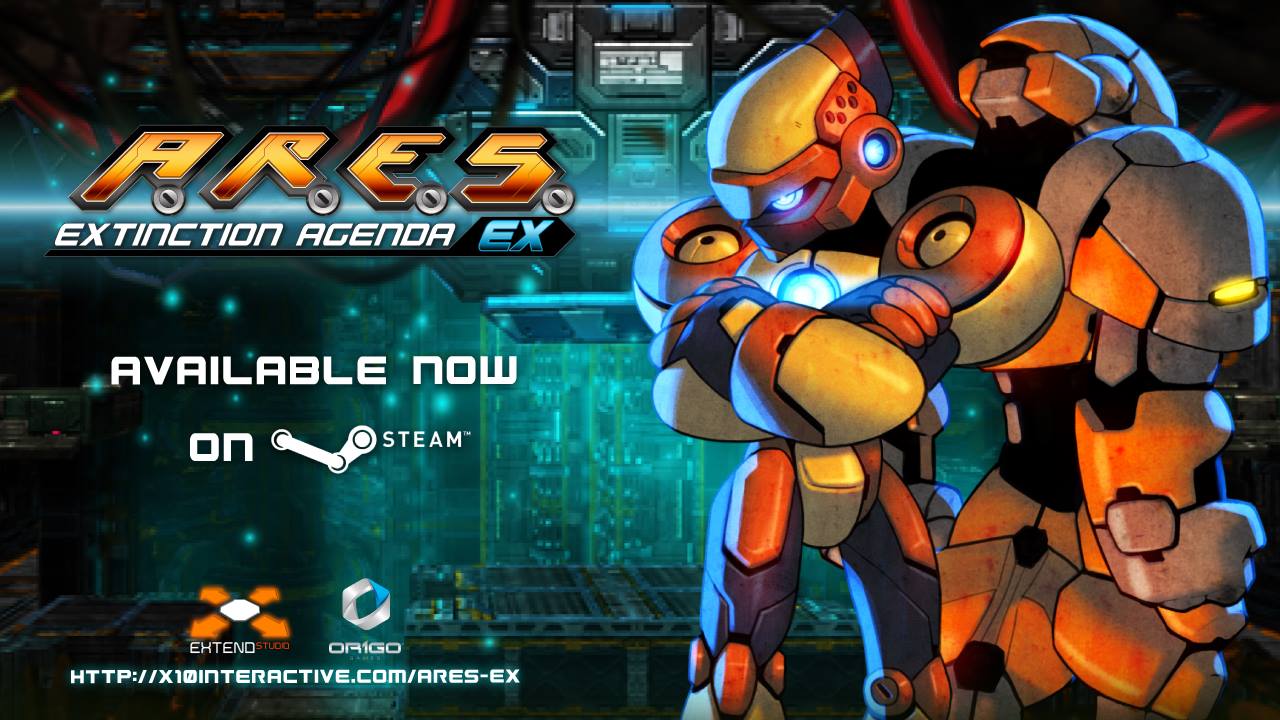 
For us, EX is like the remake/improved version of the original A.R.E.S. Extinction Agenda plus the expansion of new levels and a new playable character.

1. Five original levels are retouched and redesigned at some parts. The weapon/ability system and GUI are totally redesigned.

3. Original enemies and bosses are also re-balanced. Some of them are improved with the new AI

4. There are 2 new levels, built from the ground up, with new enemies, obstacles, mini bosses and bosses. The story is also rewrited, so it reflects new level line up.

5. A new playable character, Tarus, is added with its own story and ending (but the sequence of levels line up is the same as Ares) Tarus comes with his own combat style and ability. I personally recommend everyone who played the original version try the new character.

6. The character leveling system and achievements are reworked.

In short, many things that we hope to be in the original version are here in the EX version. I do really enjoy the EX and I hope everyone here would enjoy it too.

Genesis Suit is added in this update. Unlock it and get a new special attack by achieving the SS rank on all missions.

We've just uploaded a new video to celebrate our A.R.E.S.'s launch. Let us know what you guys think.

Today we have a very big announcement for you ! We are so glad to tell you that "A.R.E.S.: Extinction Agenda", our 1st prize award winning game from this...

This demo is jam-packed with updates! If you didn't know better, you might think this was a new game!

Can't wait for the full release? Play the demo, today, and kick some Zytron-butt!

Any chance we can get the DLC that seems to be currently Steam-only?

Any hope to see it coming on Linux? =s

It uses XNA framework, it seems devs would have to build their own custom middleware to support Linux.

Looks like a new Turrican to me, and that's AWESOME :)
Great music!

Exactly! Turrican I & II were some of my favorite games back in the Amiga 500 days. If Extend Interactive also integrate something similar to Turrican's "energy drill" on a future level pack, expansion or A.R.E.S. II, I'd love it even more!

Awesome, awesome 2d side scrolling action game in the vein of the Mega Man/Mega Man X series, older Metroid and Contra games! I haven't found a game quite like this in a long time, probably not since the before mentioned predecessor console system's games. I signed up for Desura just for this game alone and boy, was it worth it! Any old school gamers will absolutely LOVE this 2d side scrolling shooter and now that it's only 10 bucks, it's a steal and a no-brainer! GET IT AND ENJOY THE PSUEDO 2D OLD SK00L GOODNESS!!! X^D

Sorry for the double post, but, an idea came to me. Will there be a level editor, or modding capabilities in future updates? And if so, would multiplayer be possible?

Say, do you plan on fixing some of the translation? Like, say, the spelling of Photon Launcher or some of the cutscenes? I mean, I understand what you translated, it's just not exactly correct.
And do you plan on adding on content, or saving it for the later 'chapters'?
It's no big issue, though. Great job on the game, it's awesome!

Bought the game and enjoyed the **** out of it!

I love you because of this comment now. And that is just the way it is.