Summary:
Sent to a Blacksite to re-establish lost contact and retrieve secret research data, your mission takes a turn for the worse. Welcome to Apocalypse Z a Top Down 3D RPG shooter with basic crafting elements.

Story:
"In a world where Private Military Companies (PMC's) have become more powerful than the government's that rule.
Blacksites are being created to hide the Black Ops projects that governments are not able to carry out with the regular military means.
Within these Blacksites, many activities are carried out. From interrogations to highly classified research projects.
One of these Blacksites has been carrying out a secret research project to create a new breed of super soldier. This project was activated due to a contractual agreement between the Dept. of Defence and your employer. This project was given the codename 'Iron Fist'.
However, this research Blacksite has now gone offline. No contact has been received from this site for more than 24hrs. Which has now led to emergency protocols being implemented.
As part of an elite unit, your employer is sending you into this Blacksite. Your mission is to re-establish contact and most importantly retrieve ALL research data related to Project Iron Fist..."

Play style:
Players take control of a character from an elite unit. The game is a 3D Top Down shooter with RPG elements - Missions/Quests, XP and Levelling system, loot system, different weapons, armour etc. The game will also contain an in-game store. This will be for game currency not real money.

Thanks for voting and helping Apocalypse Z on it's quest to become the 2021 Indie of the Year. You are now in with a chance to score some free games. Help this game secure more votes by embedding the widget (or link) we have included below on your favorite sites.

Running from The Dead

Getting very close to a playable prototype now - which is exciting!!

Looking to get some feedback before I power down the computer for Festive break...

I have added the ability for the player to be able to keep a constant eye on the action at all times. So when the character approaches walls and potentially goes out of player view - we wouldn't know what was happening in that part of the level surroundings - until now...

That said, it is here that I would appreciate the feedback from the community.

If you watch the first 30 seconds of the following video, you will get an idea of what I am working towards:

Below I will add several images and explanations and then hope to hear your feedback on the matter. 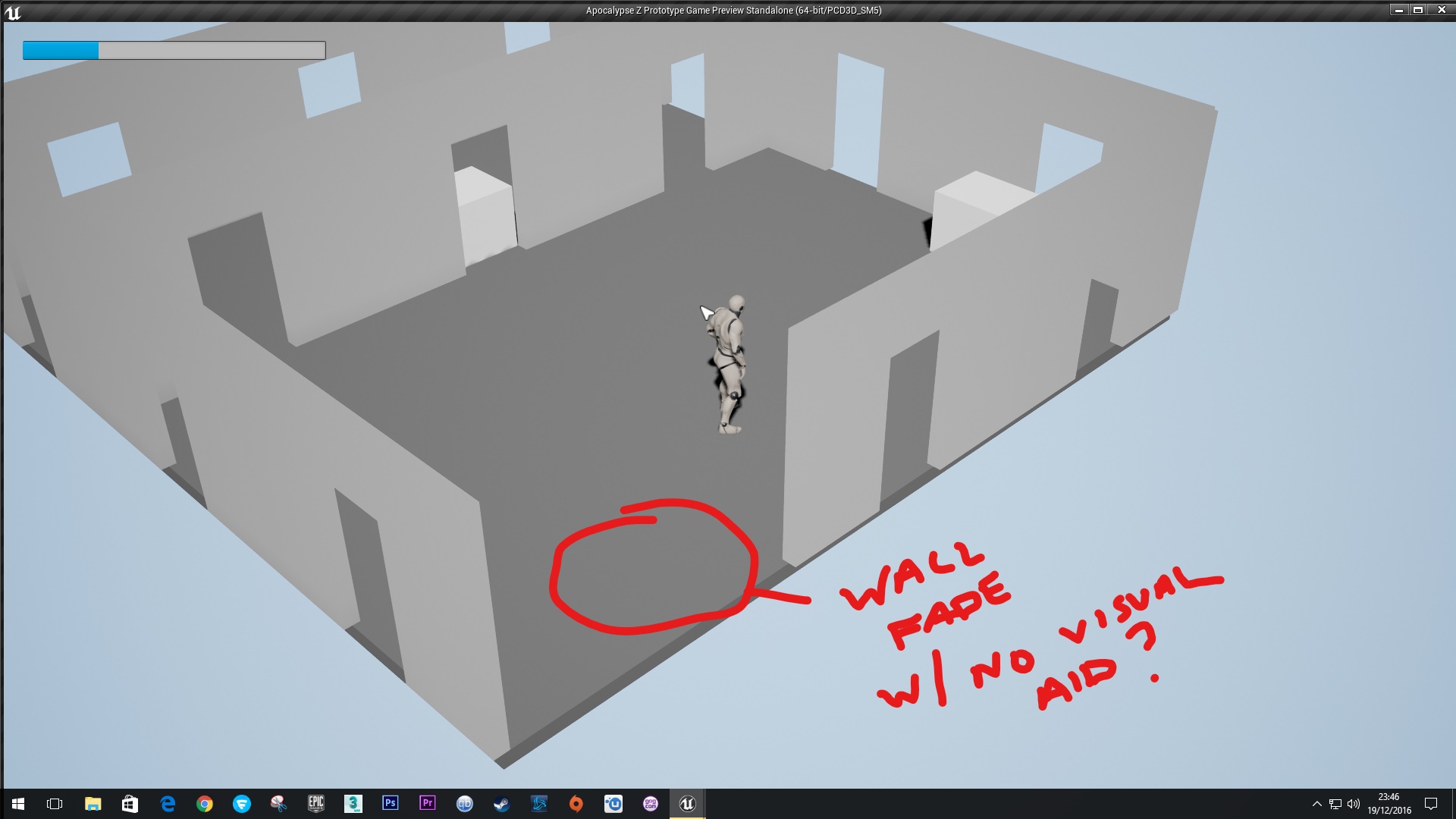 Would it be better to have a complete wall fade? Where the wall completely fades out to a disappear (as seen in the above picture). Or have a partial fade? The player will be able to see through but will know there is still a wall blocking his path (as seen below). 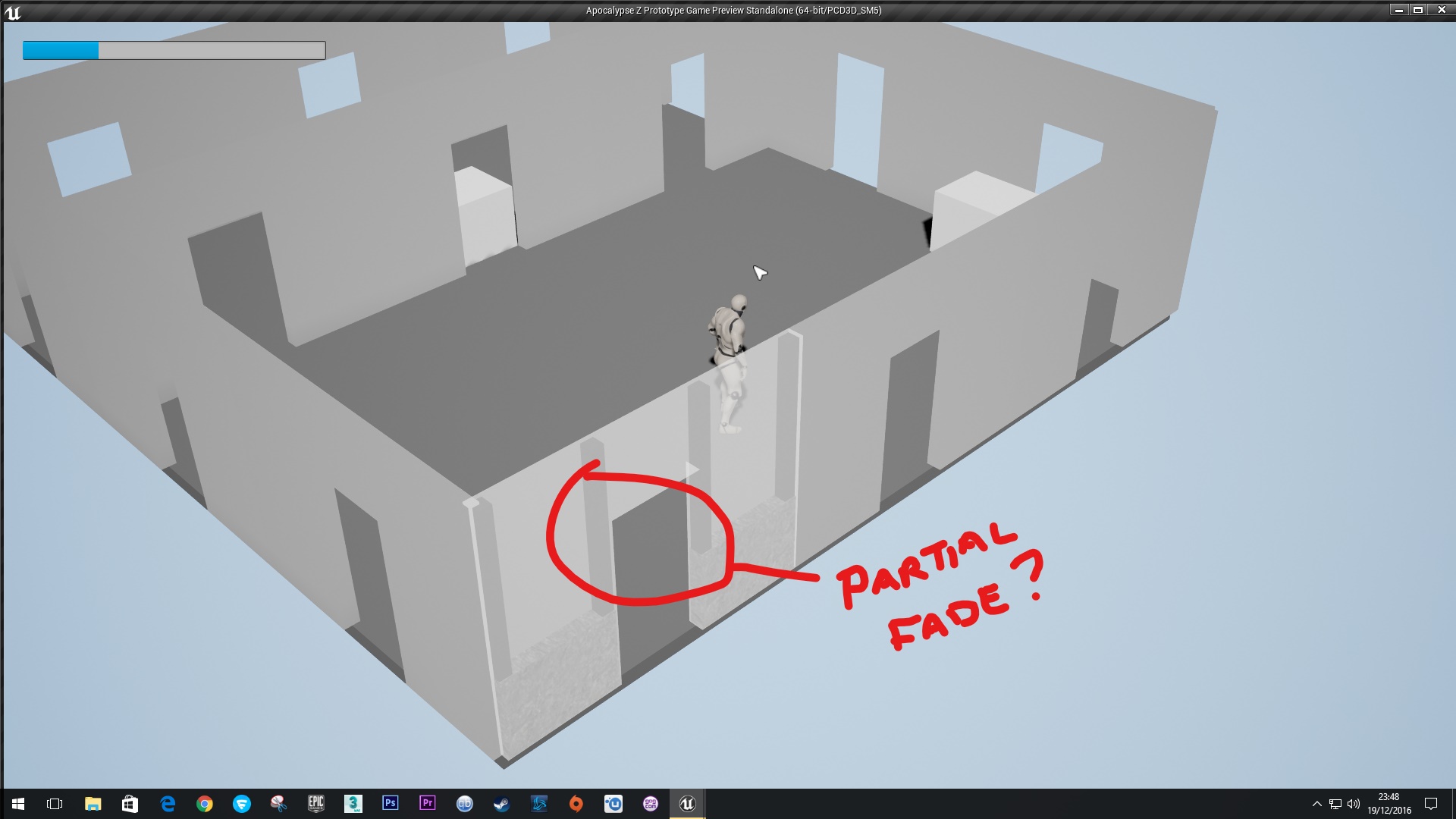 Or then we have the options of a full fade but having a visual aid representing the cut away wall. 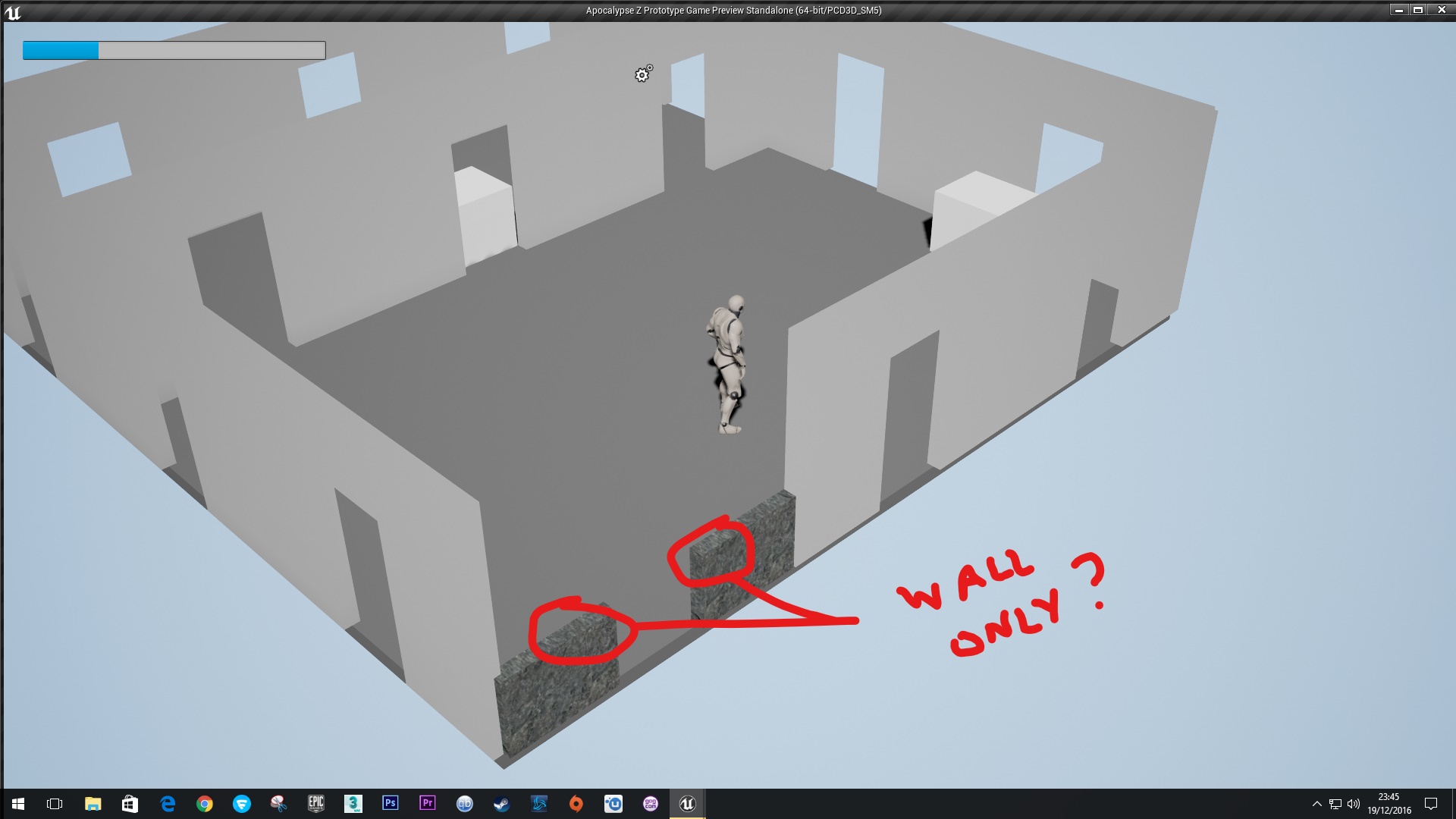 Above we can see a full wall fade, and a cut away portion of the wall has been left as a visual aid, to show the player that they can not traverse through the walled off region. 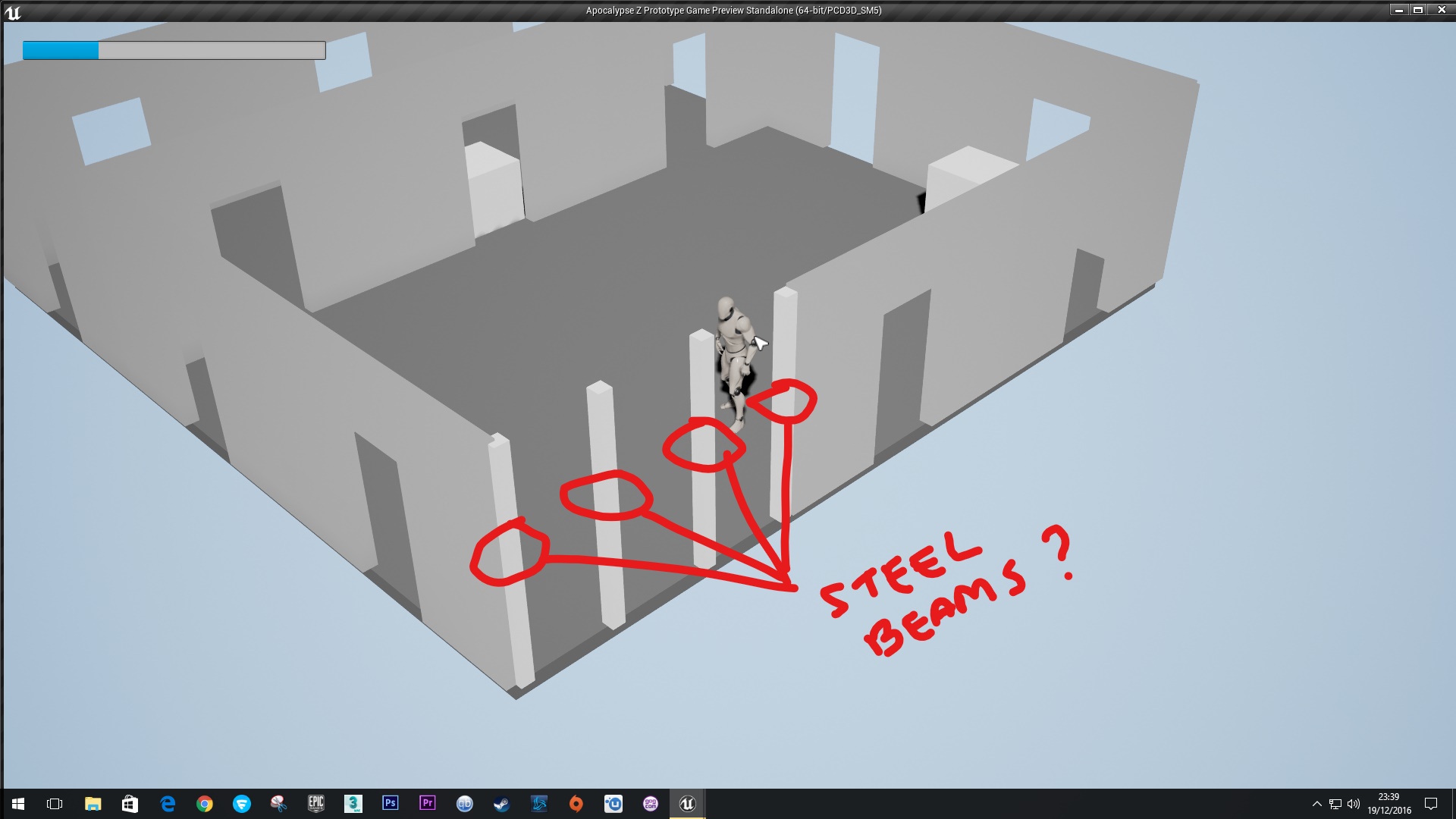 Above image shows again a complete wall fade, but with beams (like steel girders or a stud frame etc.) acting as a visual aid, again to show the player that they can not traverse through the invisible wall! 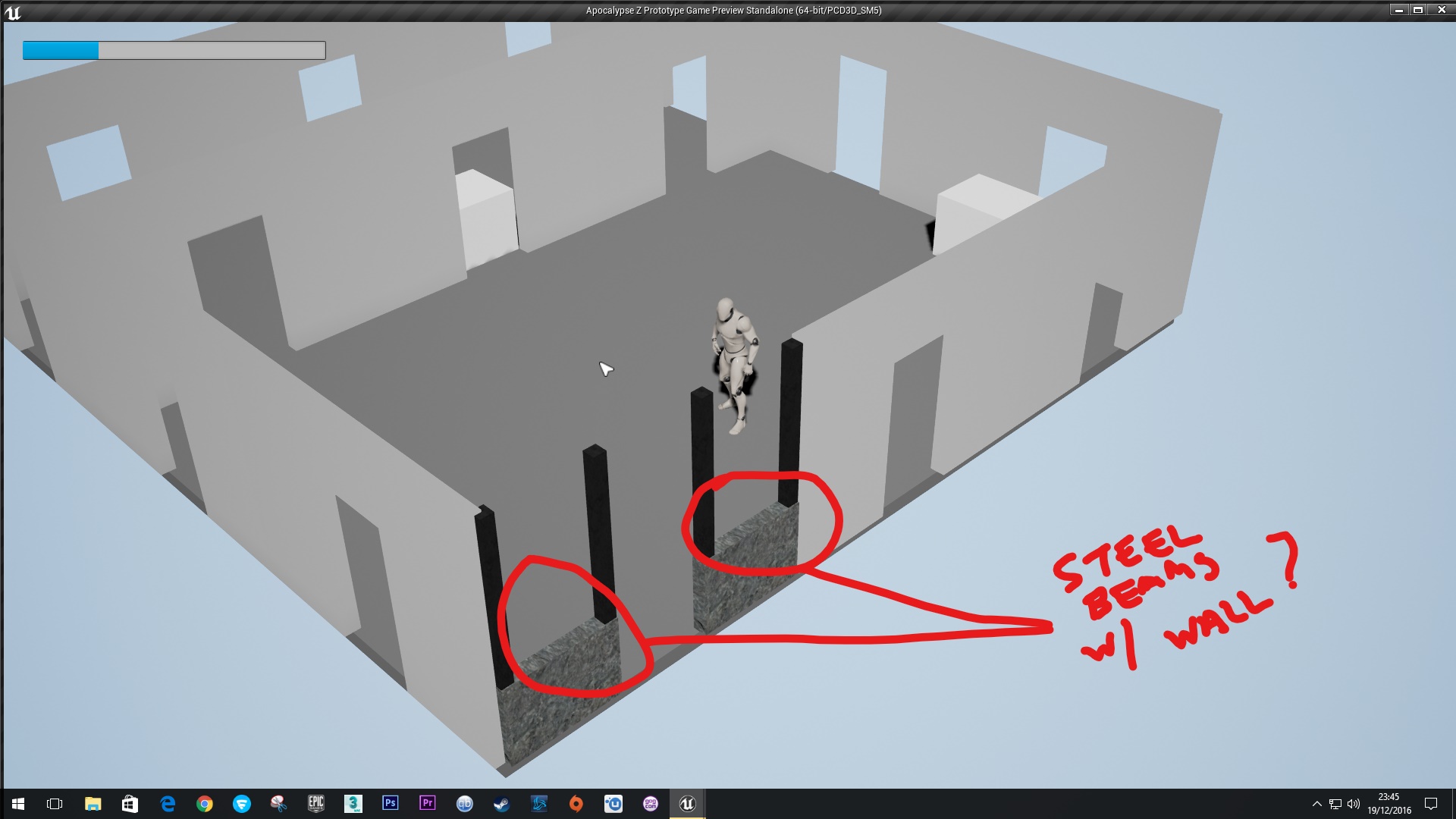 Above shows both a cut away style wall and steel girders to represent a wall that has been hidden, so that the player can see more of their surroundings while moving behind otherwise action blinding walls!

Have your say via the poll: VOTE (voting to close Christmas Eve at 9pm GMT)

Thanks for taking time out to read, and I hope to see your votes, to help me decide what type of wall fade to put into production. As always be sure to track game for future updates. I also have a website and other social media pages for you to stay up to date with the game progress. So like, subscribe, follow and favourite, and I will be back soon...

Happy gaming and a Very Merry Christmas to you all!

Sent to a Blacksite to re-establish lost contact and retrieve secret research data, your mission takes a turn for the worse. Welcome to Apocalypse Z where...

Sent to a Blacksite to re-establish lost contact and retrieve secret research data, your mission takes a turn for the worse. Welcome to Apocalypse Z where...

I look forward to seeing more in the future! Please keep it up. Consider this game followed :)

Keep up going. Good luck with this project. I followed it!

Thank you, I am working hard everyday to make it better :)

Running from The Dead Role Playing