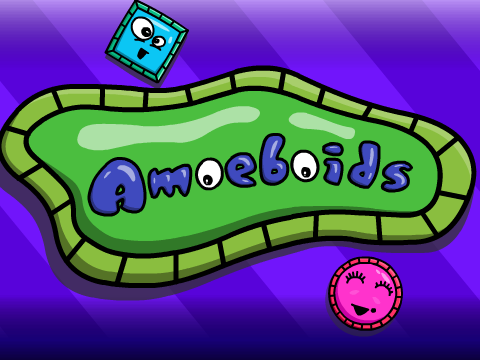 Amoeboids is a fast paced, physics based Action-Puzzle game, where you grab, toss, and throw cute colourful amoebas. Merge the amoebas together, level them up and then chain them together for insane scores! Keep your amoebas safe from kamikaze baddies though; even the biggest amoeba can’t withstand the blast of a baddie!

A group of poor amoebas have been abducted by a mad scientist and imprisoned in a very hostile, experimental cloning petri dish biodome. As if that wasn’t bad enough, he’s gone and thrown mean and nasty baddies into the dish biodome as well. These ruthless baddies will mercilessly shred and rend cytoplasm from nucleus! Your goal is to help the cute amoebas grow in size and number, so they can escape their demonic tormentor once and for all!

Amoeboids is pretty much what would happen if Bejeweled and Osmos had a baby, and then that baby grew up to be an adult having several babies of its own, and then one of those babies grows up to be a prodigy and gets a doctoral degree in half a dozen things. But one of those babies also grows up to be an eccentric artist that has a strange habit of eating wormwood. Well, Amoeboids would be the half-sane eccentric artist tripping balls on wormwood.

To promote Amoeboids and grow its popularity (top games), use the embed code provided on your homepage, blog, forums and elsewhere you desire. Or try our widget.

Grapple Jump is a 2D arcade game where players must use their squid-like grappling hook arm to climb as high as possible, avoid enemies and grab power-ups...

Super Crate Box is coming to bring back the glory of the golden arcade age, when all that really mattered was getting on that high score list. Grab your...

Mad Goose is a casual game in which you must avoid air traffic for as long as possible. There are several play modes: Single player, local multiplayer...

Tap to fly for as long as you can, but don't get knocked out. In Wild Kiwi, you're a kiwi bird who really needs to get a move on. Fly as far as you can...

Cook, Serve, Delicious is a hardcore restaurant sim, one of the few in it’s genre that gives the players total control over where they want to take...