Aeon's Dawn a Tactical RPG inspired by Fire Emblem, Final Fantasy and elements from XCom. Bringing the tactics gameplay to you. Observe the terrain, analyze the enemies and command your party to victory. Create a steady combat formation and be able to adapt and regroup to prevent enemies from attacking you from behind.

Aeon's Dawn is build from the ground up to be able to tell a story through a combination of gameplay sequences and player choices (direct and indirect). The story progression will be similar to that of a Visual Novel, you will start in a "common route" where you'll get introduced to various elements of the lore. You'll get to know some of your party members and the world they're currently living in and the state it's currently in. From where the narrative will split into various 'branches' where you'll be able to either experience the story from another side or perhaps with completely different ending, your decisions, your story (more info on story progression under gameplay later).

The world:
Aeon's Dawn's world is one that is freshly filled with magic, it's origin is still a mystery mostly, but the people are finally adapting to their new powers and so is their society. Magic, once non-existant, now plays an important role in their everyday lives. Magic prowess and aptitude carries a certain influence that will be more deeply explored in the game.

The gameplay:
Build and designed to be a 'Tactical RPG' Aeon's Dawn brings a myriad of ways to customize yourself and your party members to bring out their full potential no matter the fight or situation. Choose from a vast array of spells all with different effects, hit, crit and potencies. Use expensive AoE (area of effect) abilities to lay waste to enemies in large groups, but beware of friendly fire. Protect your healers as they go and heal the frontlines, assault the target's mind or even take control of them for a set amount of turns. Abilities can also be preemtively cast to lay various traps for any unlucky soul in it's vicinity upon execution. All of this is possible thanks to the extensive scripting language build into th game engine (a custom engine language and Lua for more advanced techniques).
Every character will also have unique and shared classes to level up and gain new abilities with. Spend your points gained from levelling classes to unlock permanent abilities (heal for a warrior) or a new hybrid class (priest and warrior points to get Paladin class).
Thanks to the extensive moddability of the game engine, the game uses a dynamic levelling system, a system designed to ensure you are never over or under levelled while still keeping levelling up fresh through various unlockables. This also enables the player to replay the game to experience other branches of the story without resetting their party, most of the party's experience will be able to be carried over cross save.

The engine:
I build the engine myself using C#, Monogame (for the general editor) as well as a custom version of Nlua to allow for mods using LUA. The editor will come prepackaged (eventually) with the game and Lua tutorials will be available to fully mod the game. With the editor you can create your own abilities, classes, character, enemies and complete maps using visual editors without coding to create a completely customized map (not included in demo).

The Gameplay demo:
A small collosseum like demo designed to be a teaser for the game and actual story demo, after a year of work we are finally able to present a polished pre-alpha that is both fun to play and to experience with. We show some of the basic functionalities like enemy spawning for combat, the general flow, the scripting system, decision making system and the general look of the game. Please keep in mind that this a pre-alpha and bugs will inevitably be in it, but please report them to me and I promise they'll be fixed in no time. This demo also doesn't showcase the story a whole lot although several nods to the general flow can be found if you go look. We did our best to keep the writing of our items and abilities in the general style of what we envision the end product to be.

Thanks for your interest and patience, but most important of all, have fun. Please let us know how you feel about this little demo, leave some feedback, the good the bad and even the ugly are very important to us.

Greetings everybody, I'd like to start off and thank you all for your support and patience with this project. I managed to gather some feedback from early testers and am ready to deploy the first new version of the pre-alpha combat demo v1.2.

Some testers had some troubles figuring out the controls and ways to control the game, so I'd also like to share a small "Beginner's guide" and slowly implement it into the game itself. The beginner's guide will be available down below after the changelog.

Changelog v1.2: (With a huge thanks to 養殖ゴブリン for his nice feedback Twitter @Samba_4e)

General
-Aside from the standard WASD controls the arrow keys and numpad keys 2,4,8 and 6 now control more and more functions of the game including but not limitied to; moving, selecting your action, cycling through items and selecting targets. More functionalities will be added in due time.
-On most occasions the menu key (standard 'SPACE' key) will also function as the confirm key (standard 'Enter' key).
-Fixed the 'zoom' distance on the tactical layer of combat. Allowing a much wider view.
-Added controls keyboard and gamepad controls to the "Choice" prompt, aside from Mouse control.
-The character tab in the menu now also scrolls using the mouse scroll wheel, previously online using the arrow keys.
-Can close the game menu using the cancel button when nothing in particular is selected (using standar 'Backspace' or right mouse button)
Battle
-You can now speed up the character movement speed using the "Game speed" button, more implements coming soon.
-You can now control the speed with which the camera move in tactical view
-The Left and Right mouse button functions have changed. Left click to select a character and move it, right click to unselect and move the camera to the cursor position (centered).
-You can now select the character tabs below to select the character you wish to control (standard 'Tab' key still cycles through the characters.)
More interestings items are being added as I'm writing this. But I hope that feedback will continue as it has before, it really helps to create a more streamlined experience for everyone.

You start in a party of 4, a knight, a (fire) mage, a healing druid and an archer. You can talk to the gentleman right from where you spawn to get some info about the combat and he'll be able to take you to the open garden (currently just for aesthetics).
You'll want to start off opening up the game menu ('SPACE' key) and heading over to the "Characters" tab (see attached image for reference). Select the character whose abilities you wish to change and select the "Check/Change ability lineup" here you can check any available abilities and select them to equip them by double clicking them. You'll also receive an ability description which gives an idea of what it might do.
Once you have equipped your characters with abilities you can head over to the gobin to the left inside the spawn room and accept the combat challenge, selecting from a set amount of opponents to face. Don't worry the enemies are automatically balanced based on your current level. (If you forget to equip abilities before entering combat, no worries you can still enter the game menu using the "Items" action option during combat) 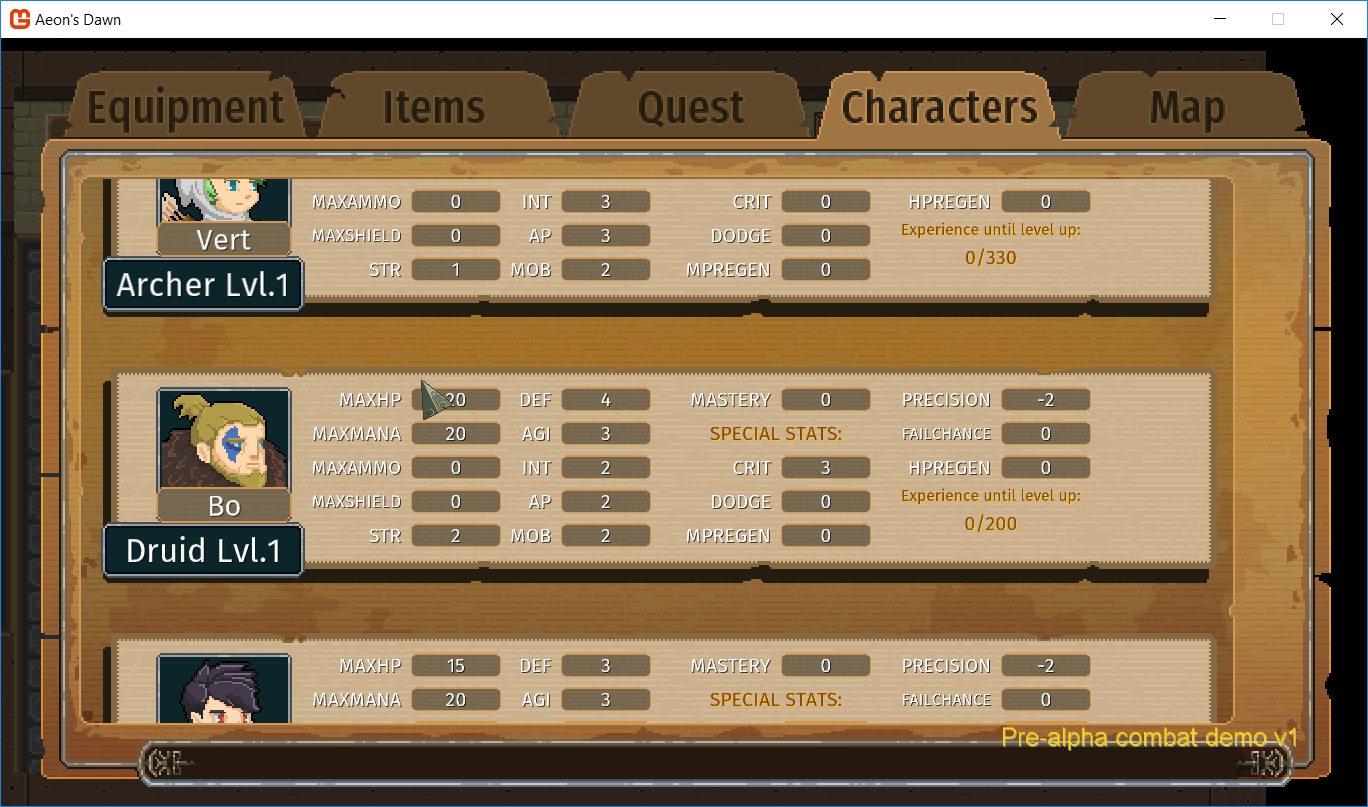 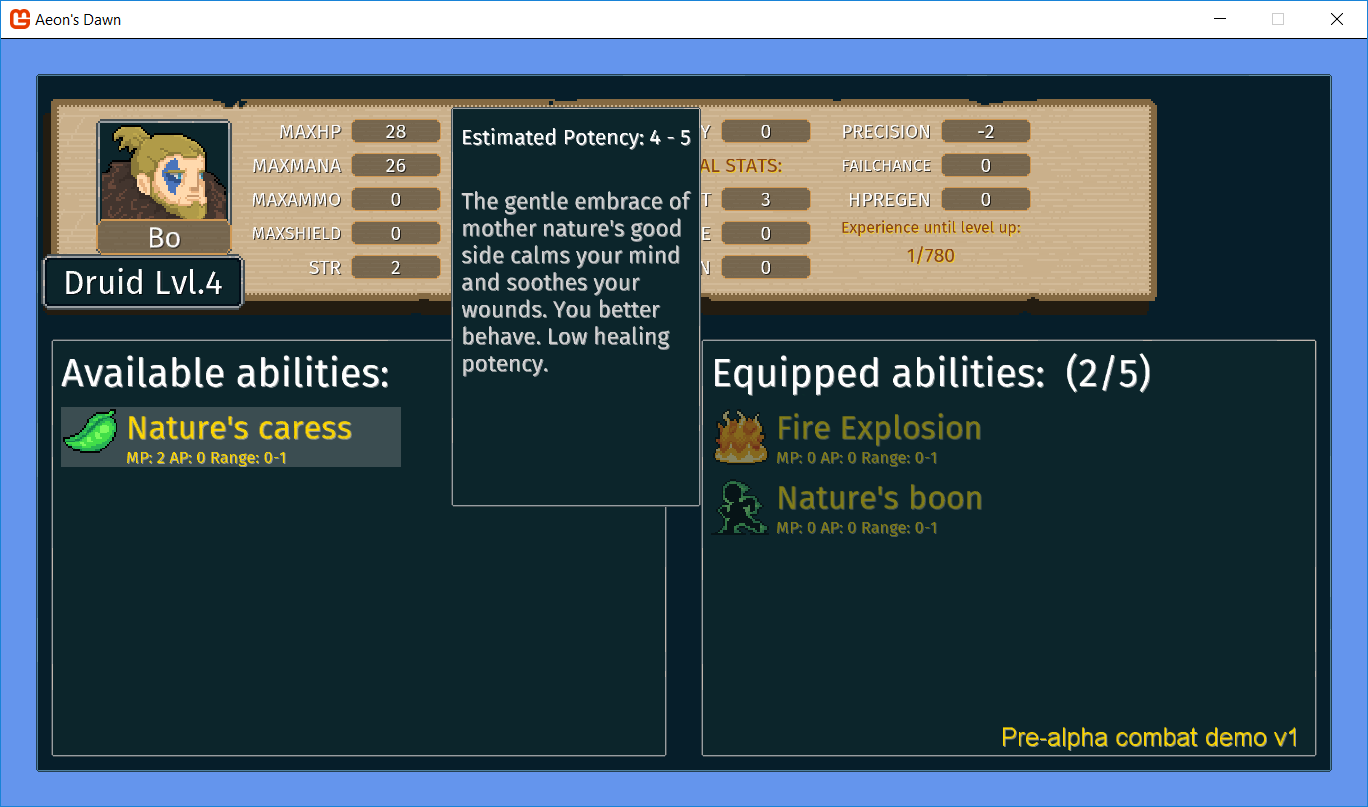 When you start the challenge you'll have a chance to place your characters freely during the so called "Setup phase" of the combat. Once you are happy moving the characters around using the Right Mouse Button, press the confirm buttons once and the player turn splash should show up marking the start of the actual combat.
To attack a target, move within range using the Left Mouse Button and selecting the target using the Left and Right movement keys while on the attack option. Press confirm to attack once you have selected a target. On the battle screen you can cycly through abilities using the up and down movement keys while you have more than 1 ability equipped.
Combat ends when either party is the last remaining.
This should cover the basics, if anything is still unclear be sure to contact me, I'll be delighted to help
via Twitter @TeamAntMountain or here on itch.io

Discussing the various updates for Aeon's Dawn, a lot has happened since the last update, go ahead and take a look. If you like our work feel free to...

Introducing our team’s new format of showing progression on the game (and engine) in the form of these smaller update articles. Our first article will...

A short introduction of our team and our current (and first) project, the game called "Aeon's Down" a turn-based strategy game based on the well-known...

So what do you guys about the combat style? It's still a big WIP but now the engine part is completed huge amounts of progress will be made.

How you guys liking the progress so far? We're having a lot of fun developing this! If you guys got any suggestion or remarks, be sure to share them we would love to hear from you guys! Don't forget to track us if you want to keep receiving updates, thx :)
Friendly regards from

the coder
&
the artist

Drums of War Turn Based Tactics