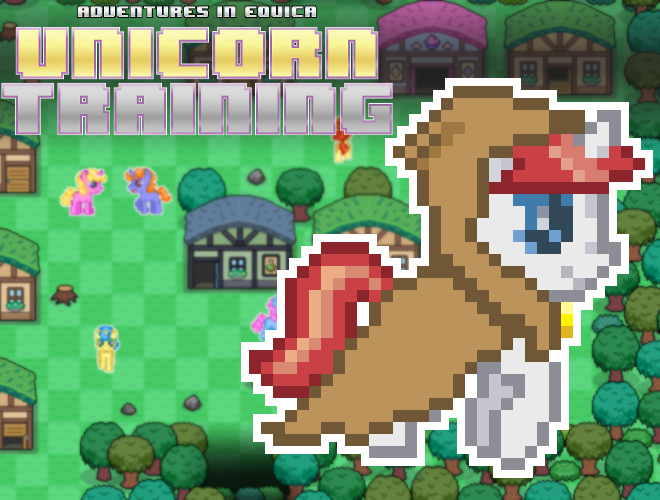 Master powerful magic, venture through dungeons, and explore the monster-filled forest of Equica!

Clover is the unicorn apprentice of Grand Swirllock the Bearded. She needs to learn the 10 basic combat spells every mage must master to survive fights against the monsters of Equica.

Traverse deadly dungeons to unlock more spells and extend your life energy! Beat all the dungeon bosses to prove you're tough enough to take on any dangerous quest!

Clover the Cloaked is a young unicorn training under her tutor, the legendary Swirllock the Bearded. He left her a series of intricately designed dungeons to test her combat skills and courage. Clover believes if she can pass this test with flying colors, Swirllock could include her on his next great adventure!

The land of Equica is one full of magical creatures around every corner. Gemstones are hoarded as currency and cupcakes are a universal commodity, serving as both food and medicine. Most of Clover's entire life has been secluded to this one tiny unicorn forest in the corner of this vast world. She yearns to see what fantastic sights and adventures Equica has to offer...

This here was my first true passion project. Up until this point I was making small games with the Unity engine to learn the basics of game development. Eventually I got sick of making practice games and decided to dive right in! Unicorn Training is a combination of every random idea I've had for an action RPG.

You've got bullet-hell combat, a choice of multiple spells that level up Ratchet & Clank style, tons of dungeons to explore and an open world, cute little talking MLP style unicorns, and it's all wrapped up in a Zelda/Paper Mario aesthetic. Really hope people connect with this game because I'd like to try to execute the idea even better in the future as I continue to grow skill as a dev.

To promote Adventures in Equica: Unicorn Training and grow its popularity (top games), use the embed code provided on your homepage, blog, forums and elsewhere you desire. Or try our widget.

Phobos Vector Prime is a notalgic videogame that combines the classic mechanics of the great arcade titles of the 80s with the MOBA's strategy gameplay...

Savage 2: A Tortured Soul takes the best of the FPS, RTS, and RPG genres and blends them seamlessly into an extremely addictive and complex experience...

A space opera focused on you: your choices shape your destiny.