A Room Beyond is a dark fantasy point and click adventure game inspired by literature, art, games and movies in the genre of victorian horror fiction.

It is published via Steam.

When you awake, you find yourself trapped in a gloomy cave. Dim candle light reveals strange symbols and cult objects all over this place. You can’t remember what happened, but this place gives you shivers. There is a tiny ray of light in the distance which might lead to a room beyond this darkness.

Outside the cave you find yourself in a forest which is surrounded by deep gorges and thick layers of fog. A crowd of people lives here in fear of an ominous apparition that creeps through the fog for manhunt.

Help the villagers to solve the mystery of the murderous fog wanderer and uncover the fate that brings you to this place.

Flavor. The plot is based on solving a criminal case and contains elements of spirituality, occultism and philosophy of life. You may like this game if you like story-driven fantasy, mystery and horror art, movies and games. In some ways the game is similar to reading a book or watching an interactive movie. You should take your time to familiarize with the plot elements and characters, in order to unfold the full game experience.

Technology. Using Unity Game Engine it was possible to combine 3D scene models with hand-drawn graphics and compose both into an overall picture. Manual and procedural processing steps create a mosaic-like pixel effect. The resulting abstraction increases the scope of visual interpretation and stimulates players’ imagination. Combination of both, smooth animations brought by modern technology and the look and feel of retro pixel game design leads to a new contemporary graphic style.

Gundelfingen(Donau)/Germany. The lovecraftian point and click adventure "A Room Beyond" continues into its final episode of the five-part saga. This update also moves the project from Early Access to full release. 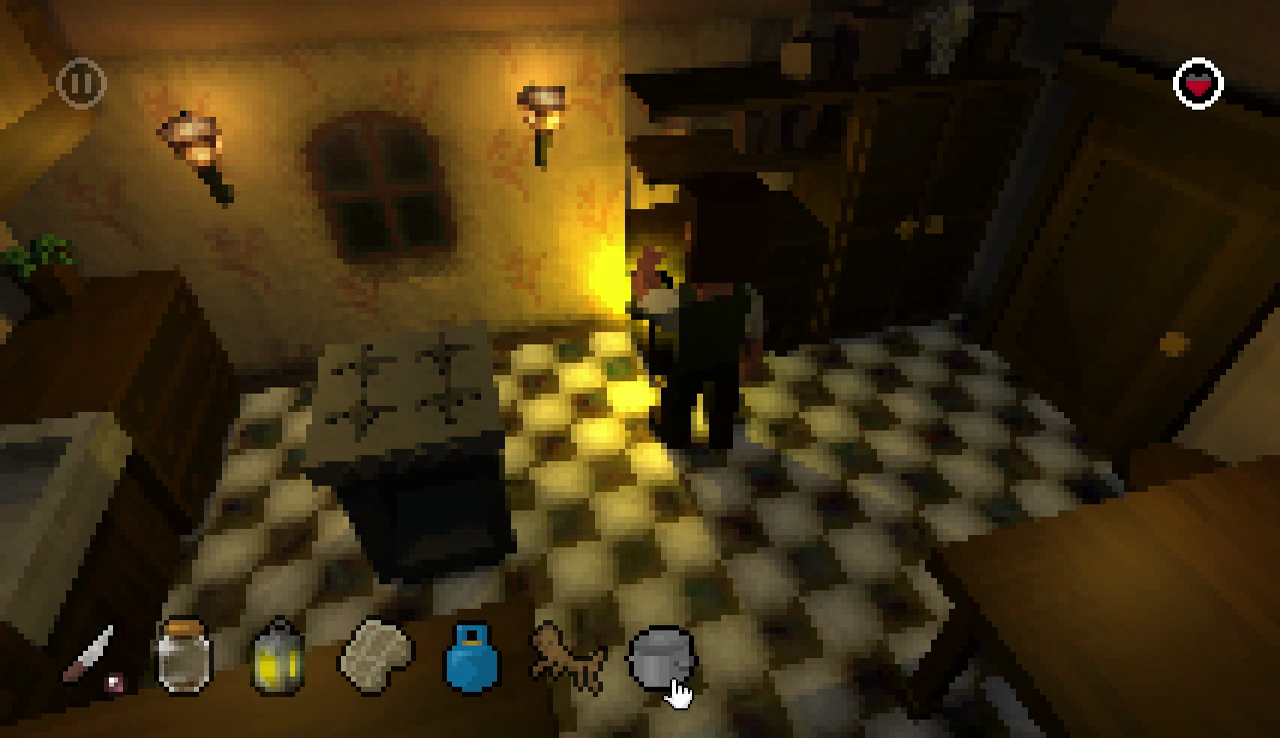 A philosophical adventure in a Lovcraftian world

A ROOM BEYOND, the fantasy point and click adventure based on essential subjects of human existence, left Early Access on June 13, 2017 with the release of its final fifth Episode.

This novel videogame draws the drama around the “Fog Wanderer”, a murderous apparition scaring a small village in a Lovecraftian world. Help the villagers to solve the murder mystery and discover your own fate which seems to be oddly woven into the entire drama.

A philosophical story is built upon inspiration coming from the book The Top Five Regrets of the Dying, published by palliative nurse Bronnie Ware in 2012. Videogames such as Alone in the Dark 1, The Last Door and the famous Lucas Arts games significantly influenced the general tone and coloring of the game, as well as the art of H.P. Lovecraft and E.A. Poe. The game’s innovative mix of pixelart and low-poly rendering has attracted a lot of interest among players and artists already.

Episode 5 - "The Wolf and the Lamb" released

Episode 5: “The Wolf and the Lamb”, brings the five-part saga into completion. The new patch introduces a haunted mansion full of challenging puzzles and surprising secrets like transcendental night-vision. Depending on players’ decisions across all five episodes, there are as many as 10 different endings! The game is localized in English, German, French, Spanish and Italian.

The game is available on Steam as a one-time purchase pack which includes all 5 episodes.

Episode 3 of the five-part saga "A Room Beyond" is released on Steam today. The latest update of the Lovecraftian point and click adventure introduces...

Learning from beta, creation of custom build tools and preparation for launching on Android.

A first beta tester played episode 1 past week. Public beta is under construction...

In episode 3. What do I do with the feather from a seagul? I showed in to Valerian, but that's as far as I got with it. Also I managed to summon Cthulhu but the achievement didn't pop up. Do I have to use particular star-shaped things (I found 5 of them) and put them into particular slots, where do I find a hint which one where to put?

The feather can be given to Gara when meeting on the ocean. (Not required to continue, but an addon plus achievement.)

Cthulhu's achievement is only granted when the exact combination is used. Hint: the position of the shore line in relation to the stars' position is relevant. Look very close at the cave painting.

So far it's fun i just don't know what to do with the skull thing. Youtube.com

Talk with the woman about the skull, she will give you a hint.

Tags
Embed Buttons
Link to A Room Beyond by selecting a button and using the embed code provided more...

At The Dream End Adventure