Mutagens are another gameplay mechanic that we added to Infektor to spice it up a bit. They provide another layer of depth and simply make the game more fun. Read on for some insights on how they came to be and how they impact the gameplay.

In a previous post, I described the mechanics of plasma drops. Now I'm going to tell you what you can do with all that accumulated plasma. But first, we're on Greenlight and need your support, every vote counts. We're already in Top 100, but there's a long way before being Greenlit.

Mutagens. A fancy name for power-ups that you can get for your microbe. They only last one round, and you need to exchange plasma for them every time you start a level. 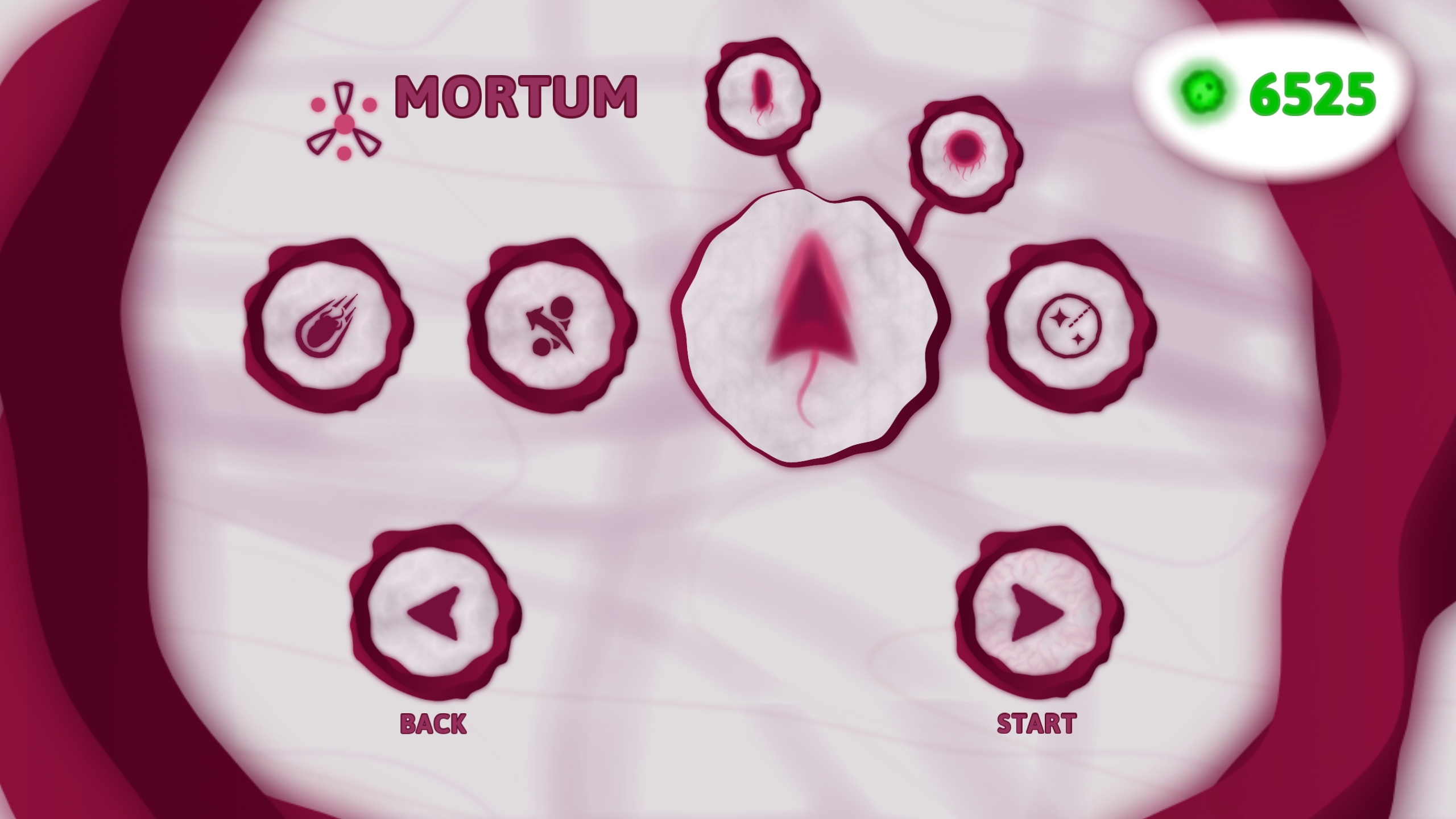 There are three mutagen slots available. Each has three unique mutagens you can choose from. Two first slots are common to all microbes, and all the mutagens there have two versions, differing in price and potency. The third slot is special, as it allows to equip microbe specific mutagens. Each microbe has three different mutagens that are unique to it. So whichever microbe you choose, you have 9 mutagens to choose from.

So what's the the idea behind all this? Well, after some deliberation we came to the conclusion that just having three microbes with different properties is not enough. With that setup, there's a real danger that the player might not like how some of them play, and simply decides to not use it at all. As a result, the choice of a microbe simply becomes illusory.

That was actually the case with me. I did not quite enjoy the slowest and toughest microbe, so I did not play it. And you might ask why did we even put it in the game, if that's the case? Well, our play tests revealed that some people liked playing that microbe. So it's not like it was objectively bad.

How do mutagens help with that? In short, they allow you to modify the microbe's abilities to either suit you preferences better or to perform better in a particular scenario. So while the differences between the microbes are pretty significant, you can make them even bigger. Or smaller, it's up to you. 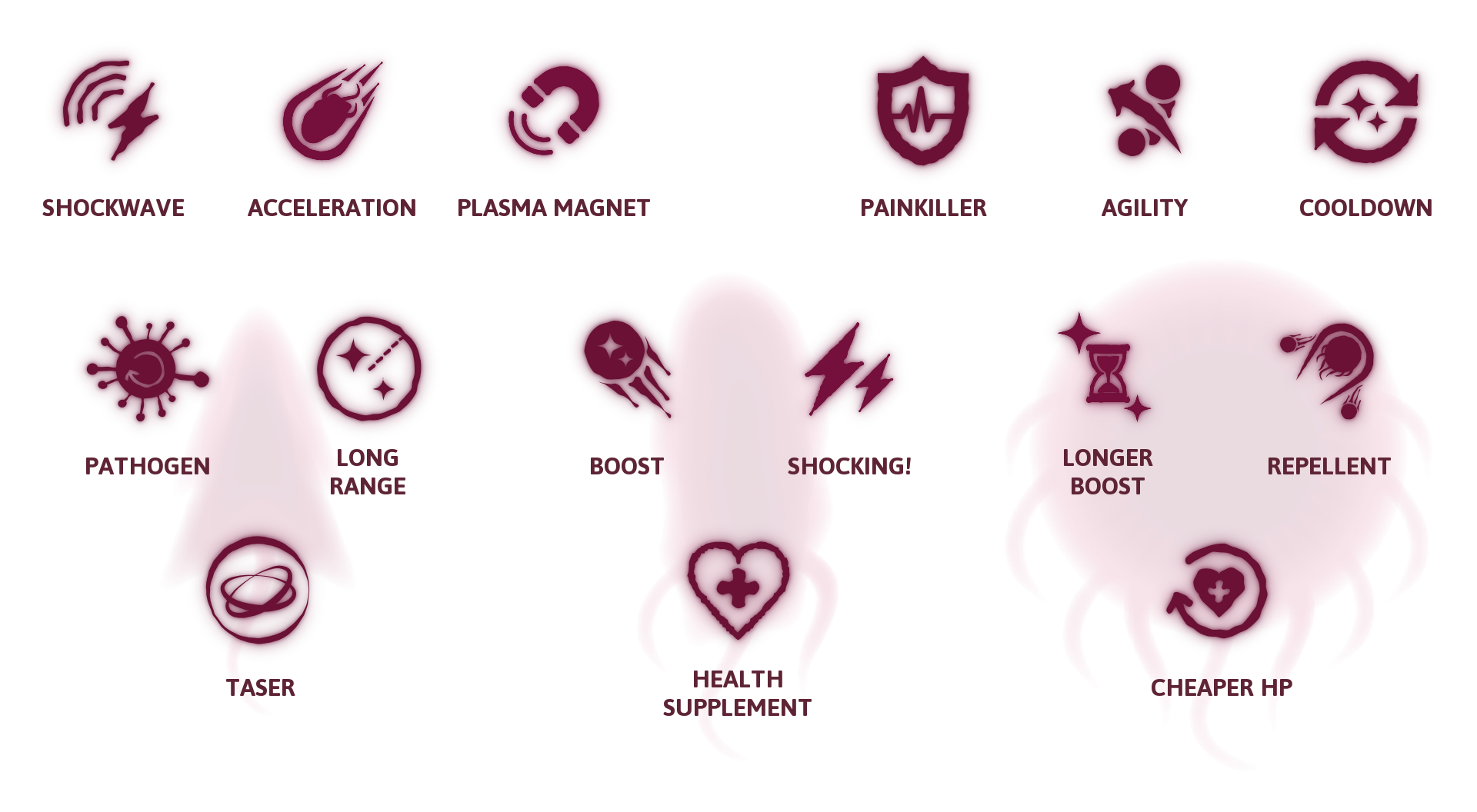 Each microbe has its strengths and weaknesses and mutagens help you to deal with that. You can use them to either patch up some of the weak spots or do the exact opposite and give a boost to the strengths.

For example, the toughest microbe might be too hard for you to handle. But with "Acceleration" and "Agility" mutagens, it becomes easier to control, so you can enjoy it for its toughness. Additionally, getting "Cheaper Health" for it will reduce the plasma cost of extra HP, making it easier to get. What you get as a result is an ultimate tank that's not as hard to control. But that's not the only way to go. You might accept the harder handling and go for "Painkiller" that will give you precious extra time of invulnerability after being hit, allowing you to simply roll over your pursuers without getting much damage. A "Plasma Magnet" will draw plasma drops from far away, making it easier for you to get extra HP. And so on...

And different "builds" might work best for different levels. Making a tank with maximised plasma attraction ability is great for "farming" plasma on some survival levels. The weakest, most agile microbe might be a good choice for some infect levels, especially with "Pathogen" mutagen that increases the infection rate. For those levels that grant bonus for finish time, this might be the best choice.

Now, mutagens cannot be a replacement for skill. And they definitely are not. Sure, you can use them to make up for your skills a bit, but it might turn out that the most useful combinations of mutagens require the most skill to use effectively. As the mutagens within a slot are mutually exclusive, you often need to make a hard choice between choosing one that will make things a bit easier for you, and one that would provide a significant edge for getting that highscore.

Hopefully, this gives you a good idea of what we tried to achieve. I'll leave you with some gameplay video.