Infektor gives you control over a microbe that found itself in a hostile environment. Avoid enemies, infect targets and wreck havoc in this fast paced arcade action game. In Infect mode, you have to infect all the targets to win the level. Survival mode is a simple score attack affair. Use your reflexes to survive as long as you can. Make good use of the environment to rack up points and get rid of enemies.

In our efforts to improve Infektor for a PC release, we decided to add some new gameplay mechanics. Here's more about the biggest addition we made: plasma drops.

How to make Infektor more interesting?

This was a question we asked ourselves after initial iOS release and the decision to bring our game to PC. I've discussed one aspect of that in the previous post on progression. Today, I'd like to discuss a new game mechanic that we added: plasma drops.

In short, dead enemies drop stuff that you can pick up. Yeah, a pretty standard affair, but we made sure it matters for the gameplay. The idea was trivial, the tricky part was figuring out how to make it meaningful. The key, we reasoned, is the risk and reward aspect of the gameplay.

Let's start with the rewards. You pick up a single plasma ball and you are awarded points. This is immediate and most trivial form of gratification. Too trivial to be useful. The more important benefit is that those plasma pick-ups fill up an extra health point of your microbe. Once filled up, you get an extra health point that will increase your chances of survival. There's a bit more to it than this, but that's the core of it.

Those are immediate rewards for collecting the plasma, but there's also a long term aspect to it. Plasma is a currency that you exchange for mutagens that augment your microbe. I'll go into details of those in a separate post, for now think of it as power-ups/loadout before a mission. 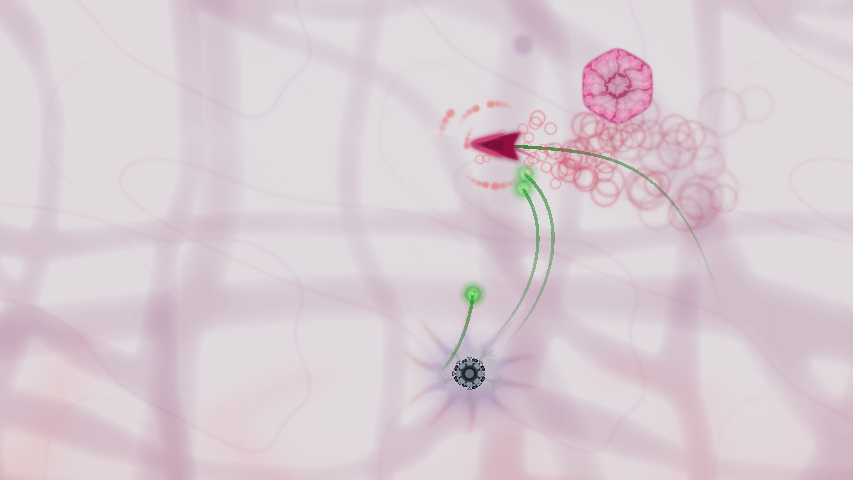 So, that's all fine and nice, but we don't want it to just be a free lunch for the player. There needs to be some added challenge, otherwise it's going to be boring. And this is where plasma decay comes into play. The player can't simply pick it up when it's convenient to him. The enemy dies, plasma comes out flying and you need to decide if it's worth jumping in to get it. Rarely will it be convenient. More often than not, you will end up putting yourself in danger's way.

Is it worth it? You decide.