Some info about the new Survival mode & Feats of Strength in the FPS-TD game Sanctum 2!

One thing that many people felt Sanctum 1 lacked was replayability. We’ve worked very hard when developing our games, so naturally we also want people to be able to play them for as long as they want! The survival game mode for Sanctum 1 was very hastily thrown into the game before its release, but for Sanctum 2 we want to give our players all the tools they need to immerse themselves in the same survival game for hours until they realize their pets have starved to death and their house has burned down.

The Feat of Strength system that we’ve mentioned in previous blog posts will be central to the Survival mode in Sanctum 2. Feats of Strength are special modifiers that buff your enemies in all kinds of nasty ways. For example, one certain Feat of Strength doubles all enemies’ hitpoints, while another can greatly increase their movement speed. These are used to make the game harder for experienced players, but they also have an important role in our new Survival mode! The longer you play a Survival mode game, the more Feats of Strength will be added to your game. We hope this will give a fresh twist to our Survival mode to constantly keep players on their toes. So far there are five Feats of Strength in Sanctum 2, and no one at the office has managed to survive long enough for all of them to be added. As if that’s not enough, the longer you survive, the higher your XP multiplier will get! We hope this will result in a much more dynamic game mode than in Sanctum 1, and we're really looking forward to seeing your results on the Steam Leaderboards when Sanctum 2 is out!

In the mean while, why not check out some screenshots? Below is probably the most action-filled screenshot we've released so far! 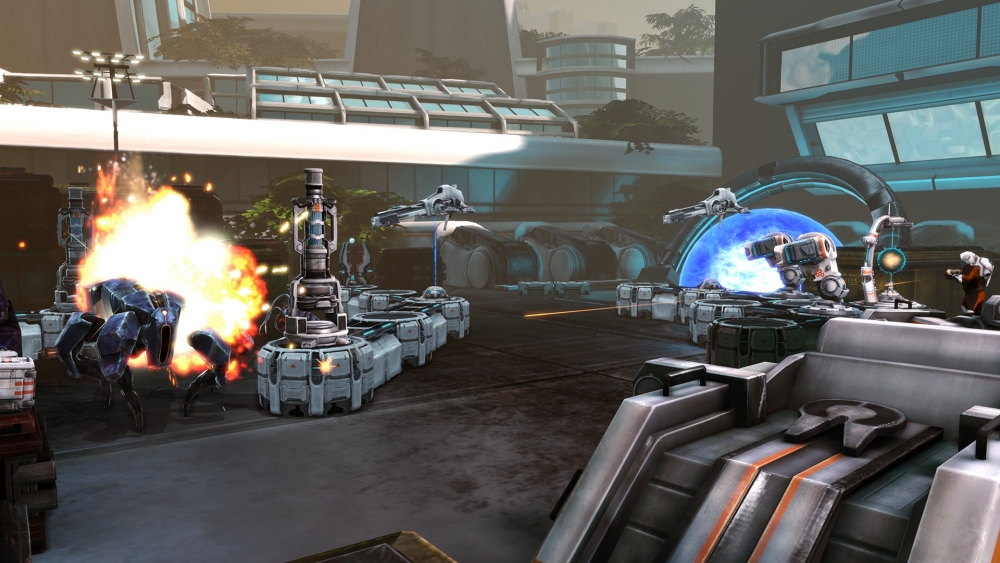 Are you going to fight robots and do you intend the building mechanics to be like they are on the picture(no blocks)?

Why would you want to fight robots? Robots are awesome!

Yes, these are the new building blocks. Or rather building circles. Or octagons. :)

I never said i would like to fight robots, but that walking thing looks like a robot.

I hereby confirm, it is a robot indeed.

Truly yours,
the Robot Commission