After many months of studying and researching old scriptures from different sources, both official and fan-made, we have created a compendium of Etherian lore. Warlords and warladies, today we would like to present the knowledge we gained about the Wood Elf race. 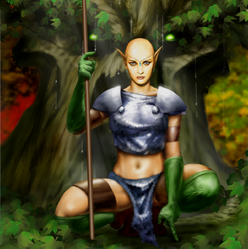 Long ago, all elves once appeared as wood elves do. Those who remember sometimes refer to them as ancient elves – the unified race of elves. In mind and soul, the wood elves yet represent their ancestors, believing in the preservation of everything that made them who they were. It is for this reason that many believe wood elves to be the 'true' elves. Like their brethren, they are unnaturally elegant, as though radiating the tranquil beauty of nature. As would be expected, wood elves make their home in the forests of Etheria, making marvelous canopy cities. Due to their history, wood elves can seem introverted and despondent, preferring to keep much of themselves secret to all but their most trusted allies and friends.

To high elves, they appear to be soft and defenseless, lacking the power they once had and lacking the resolution to discard their ancient culture. Regardless, the wood elves are far from vulnerable and are more forgiving than their boreal counterparts. Solhaven is rumored to have the best martial arts trainers in Etheria, teaching grandmastery in the spear, the bow, the sword and hand-to-hand combat. Many wood elves are also experts in guerilla tactics, preferring stealth over direct confrontation to save as many lives as possible. In addition, though they are not the most adept of merchants, wood elven trade relations are the best in eastern Etheria – all seek the wonders of timeless elven craftsmanship. The creativity of wood elves is second to none. Many are masters of one or more unique crafts. Because they prefer not to harm the earth whenever possible, weaving and herbalism are the most common practices. Metallurgical skills are passed down to the most talented in case they must be used. As such, metalworking is rare, but when the situation demands, they can create legendary artifacts worthy of their ancient elven ancestors.

Wood elves are a strangely ritualistic people. Their traditions can sometimes border on the primeval but are carried out with such grace and finesse that they appear almost divine in nature. Communal worship and their link to nature are central to their very beings. As such, druids are held in very high regard. Their supernatural link to the wild is palpable even to the most unobservant beings. Almost every wood elf is wise beyond their years, seeking spiritual advancement and enlightenment over material gain. Should any wealth be accumulated, it is altruistically spent for the benefit of all, often to further their sacred purpose. It is for these reasons, and for the preservation of their ancient elven traditions, that they are often friendly with treefolk and fey.

It is not often that a wood elf has an impact on the rest of Etheria. While high elves risk their lives every day to stem the tides of evil, the lives of the wood elves are usually spent in tranquility. Their greatest influences on Etheria are tales of self-defense in the Tears of Dawn and Banewars. As such, many are quick to dismiss them, but should any foe set foot on their land, they will rise with an overwhelming strength nearing that of their ancient heritage.