After many months of studying and researching old scriptures from different sources, both official and fan-made, we have created a compendium of Etherian lore. Warlords and warladies, today we would like to present the knowledge we gained about the Orc race. 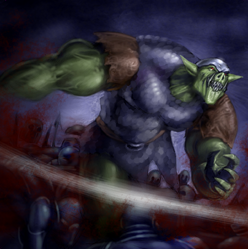 An ancient creation of Ymorgia (along with kobolds, goblins, trolls and ogres), orcs are an ugly and brutal race of creatures that value strength over all things. They are incredibly strong, resilient and most numerous of all the races in Etheria. Their hardiness allows them to survive in climates and environments which for others would be uninhabitable. Almost all orcs reside in the vast savannah and dunes of Kor, far in the east and relatively separated from the rest of the world. Some tribes have ventured outside their bounds, particularly in the White Mountains, Khazdul, the Borderlands and the Isle of Dawn, but most remain in Kor, content to live, fight each other, and die.

The endeavours of orcs are unknown to most. The homelands of Kor are incredibly vast, and none, save for orcs, have ever traversed it. What occurs in the orc country can sometimes elude even their own kindred. Despite the region’s sheer size, there are multiple legends of Kor which have managed to weave their way into Agaria – such as Grak the Great Orc and the Timeless Dragonwar of Northern Kor. To orcs, ogres and other kindred of Ymorgia, hunting dragons is often treated as sport or as a competition between clans. Orcs revel in combat - the more dangerous the better.

Not all orcs are so ferocious. Even amongst the simple-minded creatures, there are those who have comparatively outstanding intelligence. All such orcs are destined to become shamans, priests of Ymorgia or elders, whose duty it is to protect and worship those few things orcs covet more than combat. To insult their god or war heroes within their presence is to incite war. To outsiders, the various orc tribes mean little, but to an orc it is their very being. There are few things that unite all orcs – a Great Orc leader, blasphemy or betrayal of one's own tribe. Any who incur the wrath of the orcs are destroyed by the inevitable, incoming horde.

Orcs are a primitive and tribal race. Those who manage to display their strength and win in duels are higher in rank than those who are weaker or those who choose not to contest it. The strongest of orcs can lay claim to multiple clans at once. It is thought that hundreds of different orc clans exist all over Etheria and that if united in a common goal, no force would be capable of stopping them. It is fortunate then that orcs have no care for peace amongst themselves – otherwise Etheria would have been trampled underfoot long ago.