After many months of studying and researching old scriptures from different sources, both official and fan-made, we have created a compendium of Etherian lore. Warlords and warladies, today we would like to present the knowledge we gained about the Minotaur race. 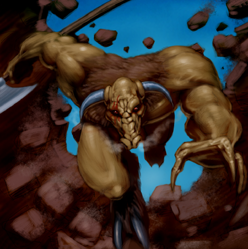 Some of the most savage creatures ever to walk the face of Etheria, minotaurs are one of Sartek's greatest creations. When the daemonic god of war and chaos first settled in the Realms of War, his influence was so great that soon every living thing in the Realms of War – and many beyond, could feel his rage and madness. The primitive human tribes residing there became twisted, ferocious, and ruthless. Some of Sartek's greatest human disciples, the K'Varr, were remade as a new race – minotaurs. Half man and half bull, these hulking monstrosities have a thirst for violence that transcends any sense of reason or rationality. Their entire existence is dedicated to conflict, whether that be with another nation or with themselves. They view almost all other races in Etheria as lesser races unless they have proven themselves in the name of their god. Most minotaurs reside in the Realms of War, content to appease their master by trials of gruesome combat. Others seek conquest elsewhere, such as on the Isle of Dawn, the Dragon's Maze or the Plains of Blood.

Many of the races of Etheria do not consider minotaurs to have lives, likening them more to machines than living creatures. Their sheer brutality makes their practices difficult to understand for civilized peoples. As such, minotaurs have little affiliation with races other than orcs, barbarians and their own brethren. Gladiatorial combat is the basis of minotaur culture. Young minotaurs are trained in a weapon of their choice from infancy and undergo blood-rites to ascend to a position in their hierarchy. In this society, there is no greater dishonour than never being able to see a battlefield. The bullmen feast on game, worthless slaves and even the weakest members of their own kind. The ruthless nature of Sartek's creations means that most never reach old age. Any who do are revered as veterans, role models of all minotaur-kind, and are feared throughout the world. If they die to a greater foe, they become revered throughout minotaur history, but if they die due to age, they are greatly dishonored and shamed.

However, not all minotaurs are quite as bloodthirsty. Some dedicate themselves to other arts of war, such as blacksmithing and siege engineering while others still are merely content to hunt with their bare hands. Despite this, their creative skills are usually very basic and they tend to rely more on their great strength. Those with mystical abilities are no exception – rather they require much combat experience just to survive. Shamans of exceptional ability are called firewalkers, who bear the pride of having defeated a Fire Elemental in battle. These Sartek-worshippers are not only tasked to guard the few relics minotaurs hold dear - including Sartek’s sacred flame - but also to execute the return of their god. When times are difficult in the Realms of War and Sartek’s presence is weak, firewalkers have the authority to rule even above minotaur kings.

Even though minotaurs are often seen as simple and half-witted, none can argue their sheer power over the battlefield. Their will to keep fighting is sometimes so strong that even death itself cannot stop them. Twice before, minotaurs and other servants of chaos came close to eradicating the civilized peoples of Etheria, and if given a chance to unite once more they could likely do so again.