After many months of studying and researching old scriptures from different sources, both official and fan-made, we have created a compendium of Etherian lore. Warlords and warladies, today we would like to present the knowledge we gained about the Dwarf race.

Posted by Patrick_Winekiller on Jul 8th, 2019 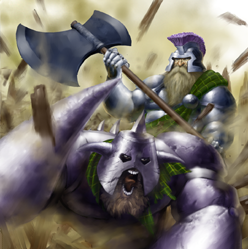 Dwarves are an old, hardy race created by their god Morannin. They are a short, stocky people with a strength, toughness, stubbornness and eagerness that is unbefitting of their size. Some of the eldest of dwarves can manage to live for over five centuries, if combat doesn't claim them before then. Most dwarves are seen as rowdy folk with a strong sense of camaraderie – and for good reason. They enjoy a tale as much as a mug of ale or a good fight, and many of their exploits have become legendary. Many dwarves can be boisterous, boastful, merry and yet also determined and resolute. Despite the severity of a situation, dwarves can be quite light-hearted and may jest with their allies. Although some dwarves can be difficult to get along with, they can also be well-liked by almost anyone.

When they aren't celebrating, dwarves are labouring hard in a number of different guilds, mining precious minerals from the earth or building some of the greatest structures in Etheria. Their astonishing skill in stone-masonry is rivalled only by the works of ancient elves. Smiths & jewellers who have mastered their craft are known to have forged some of the greatest artifacts in Etherian history. Dwarves are a rather materialistic race, which is well reflected by their skills in their god Morannin's runes – a type of magic which uses symbols imprinted in the material plane of Etheria. Though Emrik may have created the dwarves, it is through Morannin's mastery over the soul of stone and of runic magic the that dwarves could be made. As such, dwarves refer to Morannin as their first and greatest forefather. Offending their religion is like insulting the family members of every dwarf.

They are a very honorable people who take great pride in their creations. There are those who may become filled with greed or come to worship their own creations, mistaking an object or material thing for their own lives. At their worst, a dwarf can come across as gruff, forlorn or arrogant. It is well known that a dwarf's rowdiness can get out of hand. Brawls are common especially when one affronts their pride or kin. Most of these brawls never result in anything more than damaged property, but, at rare times, a dwarf may be prepared to kill outside of real combat, whether that be to reclaim their family's dignity, defend something precious to them (including material objects) or to steal. Any who commit crime risk insulting their family's honor. Their kin, even newborns, bear that burden throughout the rest of their lives, as though they took part in the crime. Usually the only way for a dwarf to reclaim their family's dignity is to march out onto the field of battle or perform a great feat worthy of song.

The Dwarven Empire was once magnificent but has seen near-destruction multiple times. In 1290 HET, the daemon god of plague created a new disease specifically for the dwarves. Within 30 years, two thirds of the entire population had fallen. Subsequently, their own ancestral homelands of Dark-Dum were captured by gnolls, the citadel of Khalil was attacked by orcs, Duernoth was sacked by minotaurs, and the dwarven people engaged in a war against the high elves which nearly destroyed them both. Those that survived became taciturn, forever hiding their grief and rage.

Even after multiple catastrophes, the true nature of the dwarves shines through. They will face any threat - laughing all the while - and stand their ground even if it surely means their own doom. Stubbornness, it seems, is a dwarven trait none can besmirch, for their strength is legendary and inspires a deeply-felt fear into any who would dare assail the walls of the dwarves or that of their friends.