Wonder how the EMG works? The R&D Team at Fast Forward just finished their report for the first prototype.

We are pleased to present the first prototype of our latest weapon design project. 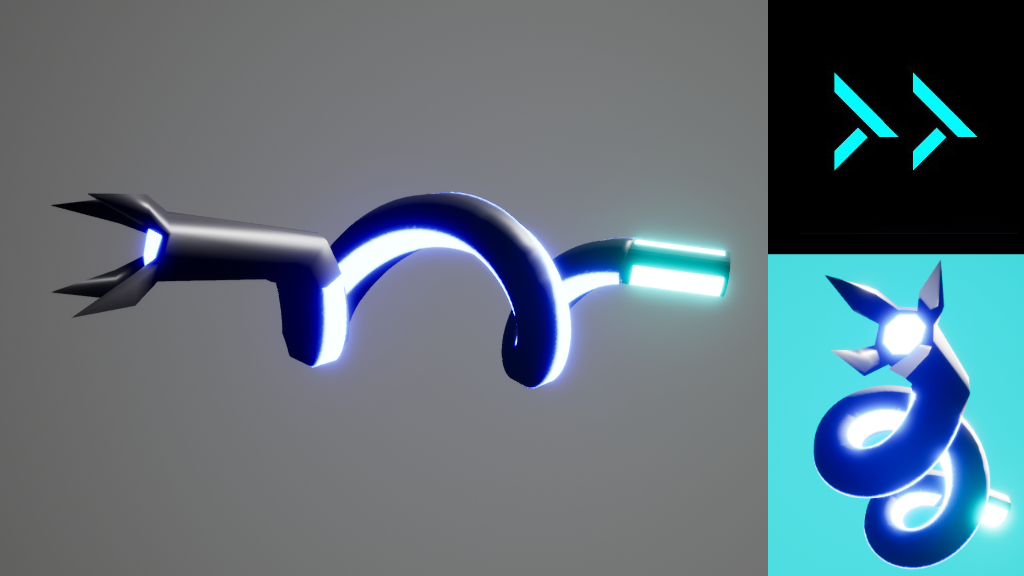 As observable in the illustration above, the gun is designed to be wound, or rather winding itself around its wielders arm, allowing intuitive and ergonomic usage while still preventing any unintended dislocations. The weapon is manufactured from our latest Living MetalTM alloy, which (quote) “appears to be breathing” (end quote), as reported by observers.

To allow for more combat flexibility, we designed two fire modes for the EMG.

The primary attack fires a small, fast moving particle projectile. Due to the low power of the projectile, this attack fires nearly instantly which allows for intuitive usage.

The secondary attack fires a big, slow moving particle projectile. Due to the sheer size of this projectile, firing requires a noticeable charge up time. However, due to molecular vibrations within the projectile, it may phase through otherwise solid obstacles. And, by our design standards, the secondary projectile inflicts great torment on any unfortunate victim.

During testing, our participants reported that using the primary attack very much reminded them of traditional fire arms, for it was very intuitive to use. As for the secondary attack, our test subjects were unconvinced initially. However, they found out that hitting an enemy with it was (quote) “oddly rewarding and satisfying”. (end quote)

As testing progressed, our participants have discovered that abusing the phasing property of the secondary projectile is an effective way to (quote) “smoke the coward rats out” (end quote). On the contrary, they also soon learned that staying away from the secondary projectile when used against them, was the best way of dealing with the EMG’s attacks.

The only abusable design flaw that was observed was when the secondary attack was used in Close Quarter Combat. The long charge up time often allowed the target to get out of harm’s way.

Mr. Serkon, I would formally request that for future tests, we may be supplied with weapon testers that are not former asylum inmates