Naming and showcasing just some of the existing and upcoming features related to this vehicle. This is just one out of the many vehicles you will be able to drive.

Posted by DevsGoingViral on Sep 1st, 2021

I am building a video game that i want to play and no one dares to make it. As a survival player if there is one survival to pick to play i would choose this one.

Join our discord made for game dev and gamer community, this is where i am developing multiple projects at once Discord.gg

Starting this article about whole video game by sharing my game dev progress on the one of the first vehicles you will be able to drive, yes we are on the beginning folks with this survival masterpiece, but it is a blast for me working on such huge project and finally seeing it slowly becoming a reality. I hope you join me and enjoy the journey together.

Some of the vehicles types you will be able to craft:
1.Specialised for both the land and the sea(utility , mining, scanning/exploration, transport, combat, crawlers/traverse nasty terrain slowly)...
2.Arbitrary(crash landed alien vehicles, the one you invent per free will by using the modular vehicle platform).

This article is about the "Spider vehicle", and he falls into few categories: crawler, utility .

Spider as any other vehicle from "Disposed" is customisable from inside out both visually and functionality likewise. Let me start by explaining why "crawler" and why it is a highly capable one!

This is something I am currently working on and was my focus last week and is a quite tricky one which is procedural leg placement system. If that does not rings to you no worries here is what that in overall means: legs positions are not keyframe animated and can decide in real time where to step as minimum. 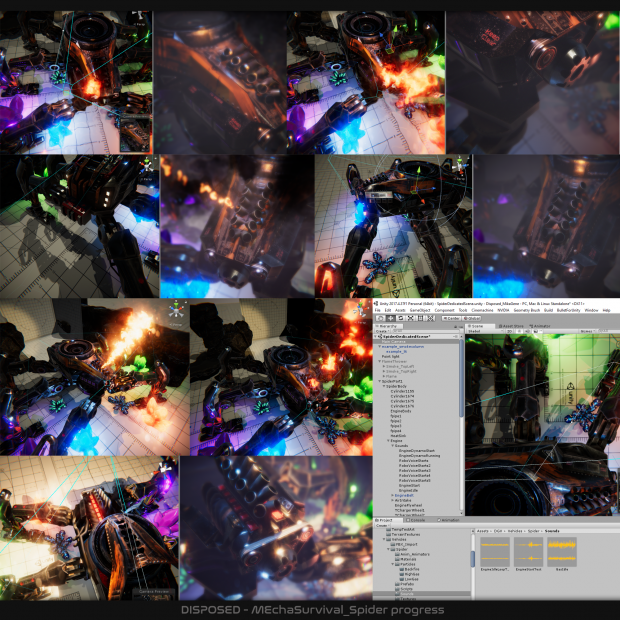 This pulls usually working with IK systems, however they are too "fluid/organic" and bend and twist and just makes me an nightmare trying to implement third party IK(inverse kinematics) systems as also my own, so there goes that, few days of hard work was wasted but is completely fine, because now i know for this mechanical legs as legs visual design suggests and if my goal is to represent them as mechanical assembly i should go with FK(forward kinematics). This means coding wise that i will have basic math trigonometry dealing with spider leg limbs simply so legs can reach(and on the way respecting their mechanical limits) desired foot destination that i previously scanned with separate intelligent surface detection system. This means i have both : pre-calculated leg position if i need it(for example test if previously scanned foot position is correct) and if that's true from the current position of the foot i will go toward new position over time and inside mechanical limits(whole system since it knows various distances that i am measuring it only needs to get the angles to rotate toward for each limb). Going from one ground position to the next ground position does not make sense so obviously in between leg will go up. This "up system" will be made with simple but very powerful approach that allows me to introduce various leg step styles(pretty much array of transforms/targets that leg should reach one by one), and what is cool about it , it is dynamic in number of the targets and also about positions of each which means i can have lot of fun tweaking how the leg steps as also i can expose these things and wrap some small game mechanics around it where player also can tweak the same thing.

However what i am introducing with this spider is highly intelligent leg stepping and in "players words" Mechanical spider can crawl on : both the solid and also on interrupted surfaces, obviously can step over obstacles, can jump, can stand on surface that is moving under him, can be suspended in air by pushing himself onto two narrow walls(no ground present) think of canyon, can walk on thin beam that is under his body/ think of gymnast beam, you can take manual control over the single leg and use it as industrial grade robot arm since pretty much it is and use it for various purposes since foot of the leg can be swapped for many other tools, spider on its own if you customise the processor can while walking or standing in place deflect incoming hazards / think of the falling rocks , all that , that i named above is per leg feature which means he can do all those things at once and decide on its own what would be the best surface to step on and doing all that by respecting the stepping style you customized as your favourite walking mode.

That was about the spider traversing obstacles and terrains in short. And that is my current focus for now. So i will be dropping updates on this spider often as soon as i manage to finish each system. And i did went with this complex spider because it allows me making great unseen terrains and providing you with unseen game mechanics that will look and play amazing.

The update i will post in about few days will be about current spider visuals, 3D design choices, scripting and attention to detail(for what reason i did this or that- expect some video on it).And these are things that already exists and i will just guide you thru my current work and your future vehicle that you will drive. Vehicles that i finish during the game development will be available for download as a build(mini showcase that you can drive, have fun with it and possibly if i am lucky leaving me some constructive feedback on things that i make for you).