A short piece on the content and features that players should expect in Lovely Planet.

On launching the game the player is thrown into the world menu where they can pick from the four different worlds over which the levels are distributed. Stars represent the completion status for every world and the levels inside. Worlds are unlocked when all levels from the previous world are completed, once unlocked, the player is free to attempt any level inside the new world irrespective of the order in which they are displayed. Crafty in its presentation, the menu is fluid and the controls are quick - I make a big deal out of it. You can navigate to wherever you want without leaving the W, A, S, D + mouse stance which a player can maintain when switching between the game world and the menus. 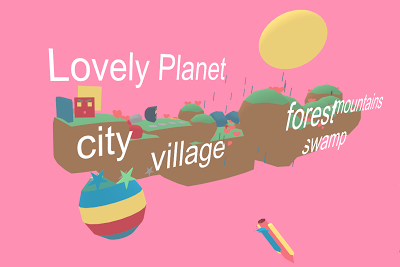 The straightforward reward system comes with its own special agenda, I like to think it does a good job at introducing players to different play styles. For example the cautious slow moving players might like to take their time hiding behind cover and taking pot shots from safety, cleaning out the whole level will get them the first blue colored star. A few stages into the second world, elements are introduced that push the player to speed things up a little bit. Every level comes with a qualification time to beat - complete the level faster and the green star will light up on your scorecard. As an added reward for the speed-run enthusiasts who might like to go up against others, the game also keeps track of the world record on each map to compare with your personal best time. 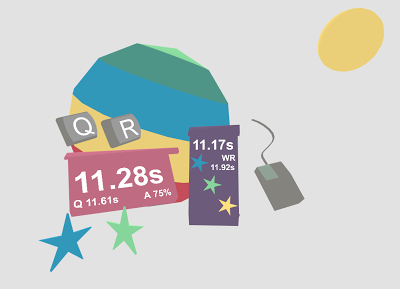 Since Lovely Planet considers itself to be the closest thing to FPS gun ballet, the final golden star is reserved for the perfectionist. Every level can be completed with one hundred percent accuracy, spending no more bullets than necessary, the gold star goes to the performer that can prance her way to the exit defeating all enemies without wasting a single bullet.

Don't expect any cut-scenes before a short clip during the credits at the end of the game, the story is so abstract it's not even told and there isn't a lot of variety in the visuals other than a slight change of weather conditions moving from one world to another. From the corridors of a generic military First Person Shooter game, Lovely Planet tries to embrace the idea rather than lying confused somewhere in the middle, think of it as a rails shooter without the rails where keeping up with the pace of the level is part of the challenge. Memorization and cheap deaths dominate the initial stages of play, but learning every corner of every level and practicing to master the fastest most optimal way through to the exit is what I feel is going to be the more rewarding experience.

This seems to be worth a look. The color choices are odd, but that makes it interesting. I'll keep an eye on it.

Thanks! The colors were meant to be a little crazy, but I've been getting mixed reviews on the pastel color scheme.