Welcome to Railroad Dispatcher - an enjoyably-paced web-based game that puts you in the role of a busy train dispatcher, moving trains into and out of your corridor. Here is an overview of my influences, an animation of a few minutes of gameplay and a list of the next few things I am going to add to the game. 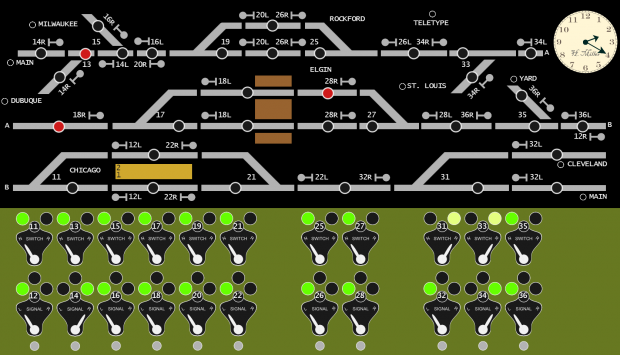 I'd like to introduce you to a game I've been repeatedly working on and throwing away, on and off again, for about a year now. The concept is to take the role of a Centralized Traffic Control (CTC) dispatcher for a railroad, routing trains into and out of your busy corridor.

For those of you unfamiliar with CTC, here is an image of a typical CTC panel:

Now, of course there are already games like these on the market, including some fine ones. I'm not talking about the quick, puzzle-solving kind of dispatch games, but the kind that more resemble their real-life counterparts. In particular I am referring to games like SimSig (Simsig.co.uk). 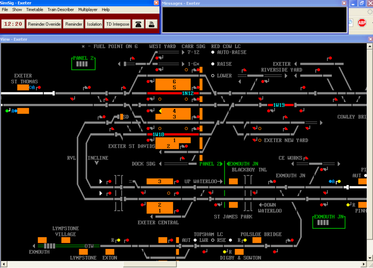 This is a fine simulation but I've been trying to think of a way to make a game like this a little lighter on the realism, but without giving up the thought processes involved in working CTC.

Here are my requirements:
1. I like a lot of railroad history, so I want to use the old style CTC control panel which only shows block occupancy. I don't want a screen that shows me everything I need to know about the trains in play.

2. I want to see all of the tracks under my control on screen at the same time.

3. I don't want to make the game an exact replica of real life operations. For example, I wanted teletype reports for important information to get delivered to the player. I don't really care if it fits the time period or not nor if that kind of information would be sent via teletype. I just want the game to feel a certain way. 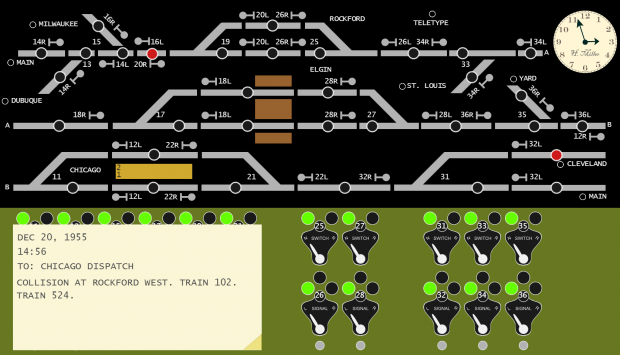 4. I want there to be a lot of things to do and control, even if they aren't prototypical. This is why the model board has slot and teletype controls, and soon, grade crossing controls.

So I feel that I am finally on the way to accomplishing that. Here is an animation of a few minutes of gameplay. You will see the following:

Two things to note: I sized my screen lower than what I've been testing at to keep the animation file size low. This is making the text on the control panel a little fuzzy. I'll address the sizing issue shortly. Also, since this is a GIF, there are no sounds in the animation. When I get a real video up you will hear them. Currently there are:

1. A bell chime announcing trains that need a slot.
2. The control panel switches emit a clicking sound.
3. The control panel command buttons emit a push button sound.
4. Not present in the animation are the teletype messages. New messages emit a paper ripping sound when viewed.

On the short list of todos are:
1. Clearing collisions from the track.
2. Showing times on the timetable. 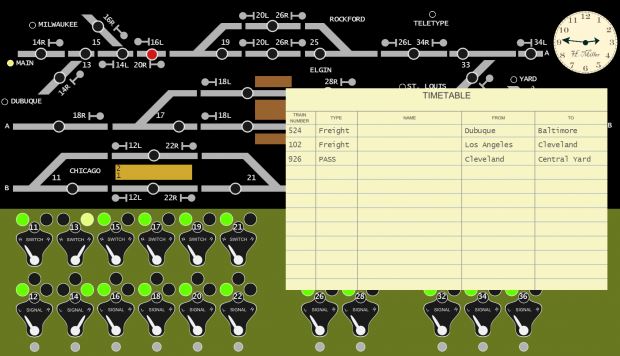 I've taken influences from both American and English railroad operations and I think it's starting to take shape nicely. I'd appreciate any feedback you may have.