Introductory guide quick start games for the new citizens of the empire! 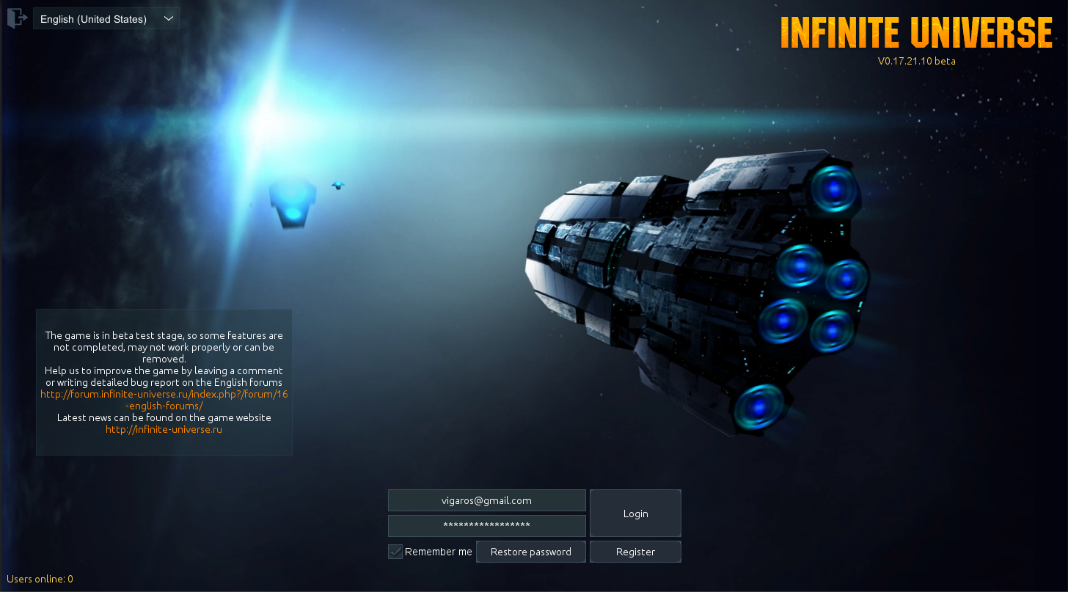 After loading you will see your colonized planet and orbital space station. That’s great, but first of all let switch to Colony screen by pressing

icon and start to execute tutorial tasks that will help to grasp basics of in-game economics.

After completing all tasks, you will be able to

Buildings are divided into three categories:

icon and try to move some of production from planet to orbit and backwards.

Note: Lift’s travel time depends on the summary weight of objects loaded into it.

Now how some of this parameters work in practice. Press

Note: Some buildings can’t be adjusted because they are automatic, Colony building for example. Also you can adjust power of each production line if you have several buildings (look at PRODUCTION part of this guide)

In general, you goal when working with buildings is to find right balance of available key parameters to minimize production time and maximize number of objects produced.

Basis of all production in Infinite Universe is a blueprints. Without them your factories can’t produce anything. During tutorial completion you will get all necessary blueprints (check what you got by pressing

icon and selecting “Blueprints”. Blueprint can be original or copy. Blueprint copy disappear after usage, so originals are more valuable.

Note: When factory uses blueprint for production, number of available blueprints decreased by 1, so if you have only one blueprint, other factories can’t use it. That is why blueprint copies are useful.

We will show how production works in Infinite Universe by example. Material “Electronic components” is very useful in constructing buildings, ships and modules, lets produce it from the very beginning of the process – ore mining.

Note: You can adjust each production line of your have several buildings of the same type

and select blueprint of electronic components in the center of the window and then input number of production cycle. In the left side there is required and available quantity of resources and materials. In the right side we can see that we will get 10 units of “Electronics component” after 1 iteration of production. Then we can go down and look what we need to produce required components until the root – ore. 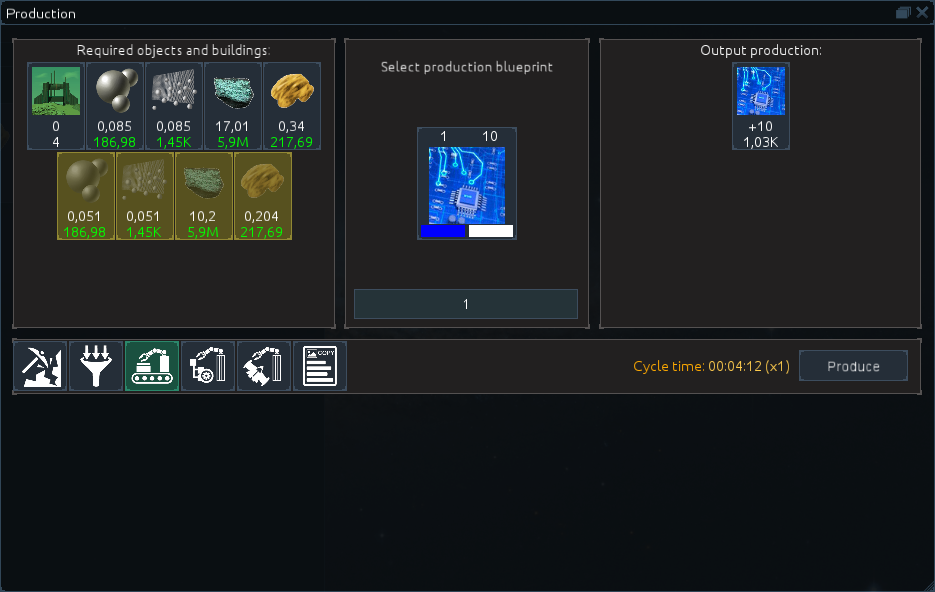 Building’s level affects efficiency that’s why sometimes you get less products than you expect.

Final production map will be:

Begin from the ore and move up until finally you will produce “Electronic components”. Now you can get anything that is needed for growth and success of your colony. Just explore resources, materials, ships and modules and how they relate to each other.

Trade is a significant part of in-game economics. Fastest and easiest way of trading is to buy or sell production from or to Empire. Press

icon and you will see what you can buy from Empire (buttons “Buy” and “Trade orders” are highlighted). Press

icon to buy and your purchase will be delivered to orbital warehouses automatically after 15 minutes.

By pressing “+” button in thle top right corner of the window you can place trade order for sell or buy productoin to other colonies.

Note: You have to construct “Trade center” orbtial building in order to do this

Trading allows you to speed up development of your colony by investing some money and buying base resources and materials that is offered by Empire. You can exchange your money to Imperials by pressing on the IMP section of the top menu. Then you can exhange them to Galactic Credits by pressing on th GC section.

Commanders are essential to space flights, because ships can’t fly without them. At start you will have one commander and he already researched sciences that allow him to control basic types of ships. Press

if you in Colony view or just

if you in Space view and exam which sciences he researched. As you build new types of ships, commander have to research appropriate sciences to control and command them. You can select current commander and recruit new commander by selecting commander face in the top of the screen.

Space flights are what is your prevoius hard work was done for. Now you can build your own ships and recruit and develop commanders for future conquest. But anaway, you have 2 basic ships at the start of the game to learn the basics of space flights.

Note: Ships are not only for space battles, but also for trade and moving objects from one point to another, you can even transport disassembled ships!

To show space flights in action we will fly to “Empty space” and destroy some pirate ships. Switch to Space View by pressing

icon if you not there.

For now your commander hasn’t ships in his fleet, so add them by pressing

icon and ships will undock. Select them by holding LMB and form a group of ships number one by pressing on holding button with number 1. Use key A, W, S, D and Q, E to move and rotate camera.

At the right hand side there is Radar that shows to which destinations your ships can fly, select “Asteroid field” and press

icon and your ships will turn their engines on and after several minutes they will be there.

After arriving you can see several pirate ships on the radar colored red. Select one of them and press

icon again. Your ships should be in the efficient range of the ship’s weapons. When distance between your fleet and pirates will be near 5 km, you are ready to attack by

Excellent! Pirate ships are destroyed. Return to Orbital station and repair your ship (you can only do this if you built “Repairs shipyard” building) 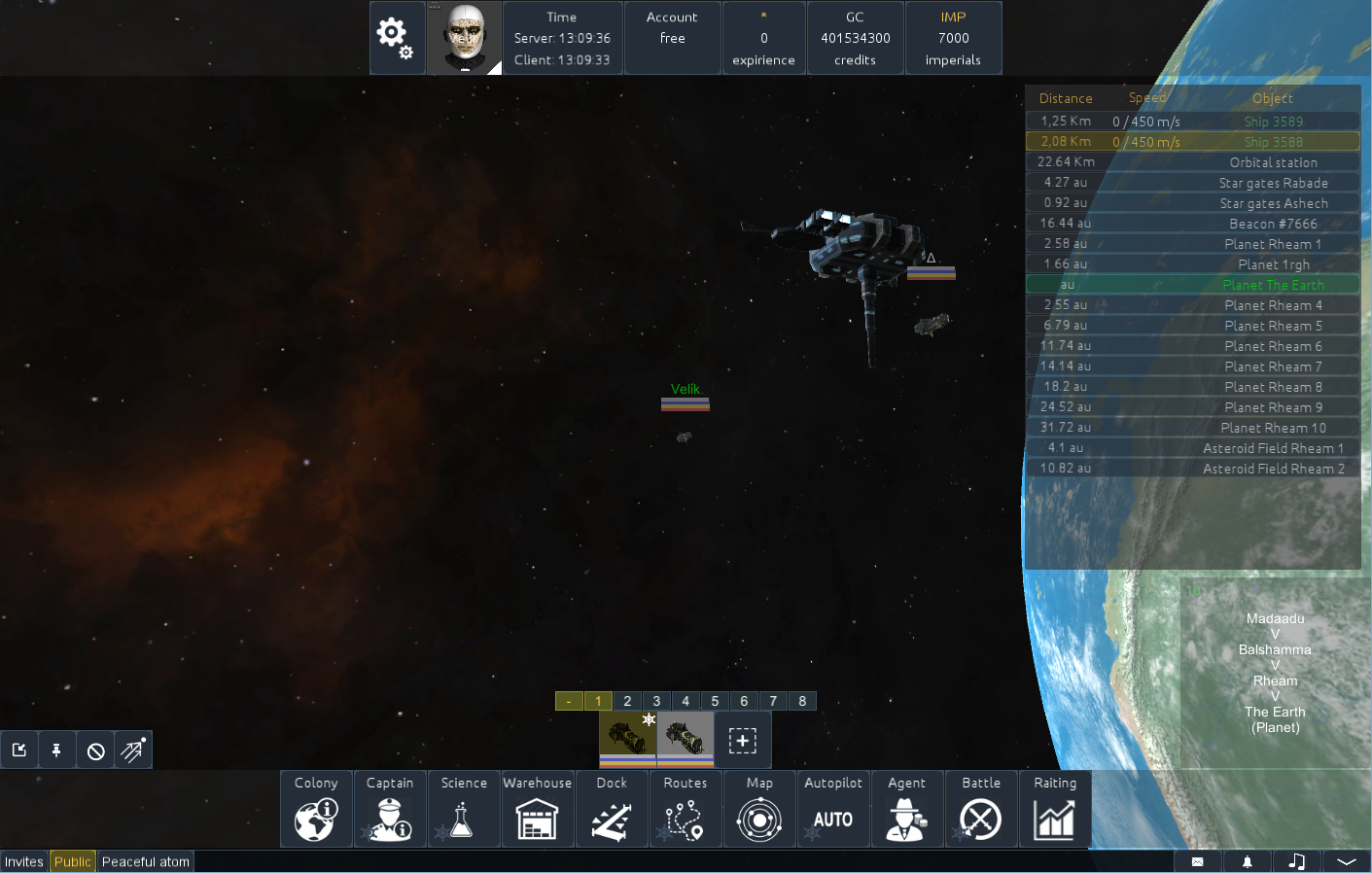 It is hard to describe all game features that is already available. Just don’t hesitate to explore and communicate with other players using Public game chat.

You can always ask questions and give your feedback on the Infinite Universe forum at Forum.infinite-universe.ru. If you found a bug or mistake it is very easy to notify developers about it by selecting

then “Feedback” then “New ticket” and very soon you will get a response.

Soo trying to be the Master of orion version of eve online?

I would say something in between, but it is our decision