I'm Andrea (@andreadst) from Mode4. In the last article I discussed how Bombslinger came to be and how we went from an elevator pitch to Gamescom 2015, our first major event.

Today I’d like to tackle how we...err...tackled the visuals design of the game, put everything we loved in the art style and how the whole thing fitted with our team setup.

One specificity about Mode4 (that’s us!) is that while we’re rolling right now with a team of 3 to 5 people, we’re only two people to begin with and we have little to no art skills. We cover the design/production/tech parts of the project but we started out without an artist.

So, any direction we would choose, we’d have to deal with that somehow.

Our initial vision for the visuals of Bombslinger was to have some retro-ish approach that would beyond 2D pixel art. Like many people, we spent countless hours with our PSX, 20 or something years ago and we developed a soft-spot for PSX-era aesthetics. More precisely, we loved how Japanese RPGs blended 3D environments with 2D characters

We also found it quite appealing to be able to have camera-facing sprites and camera-rotations to show that the world is actually 3D...it actually looks obvious to us but a look of people still get surprised by the camera switch (btw, the shop is heavily work-in-progress). 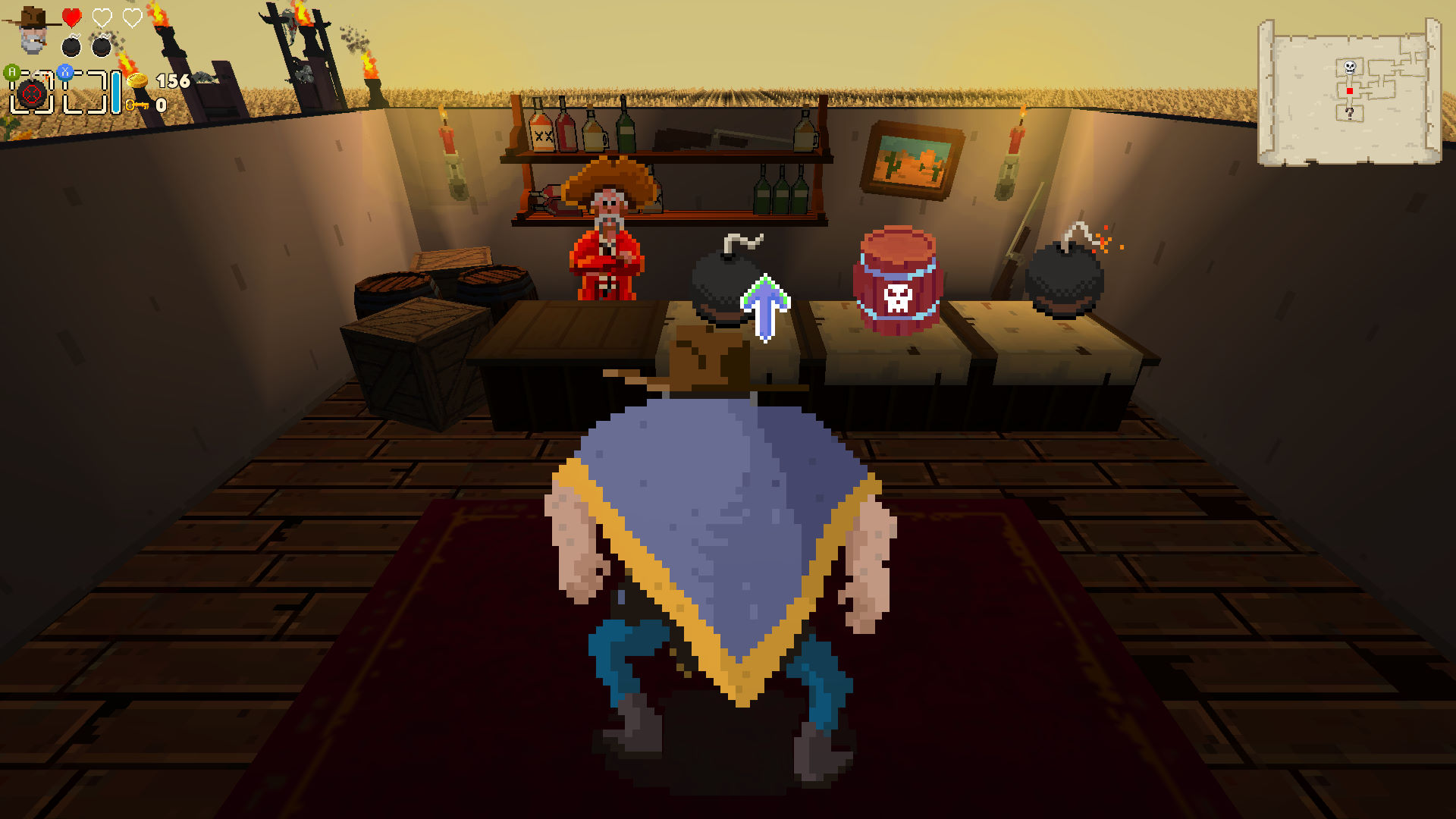 As soon as we decided on that direction, we started prototyping pretty fast with a Unity asset store pack and in the first month we got something running that looked like this: 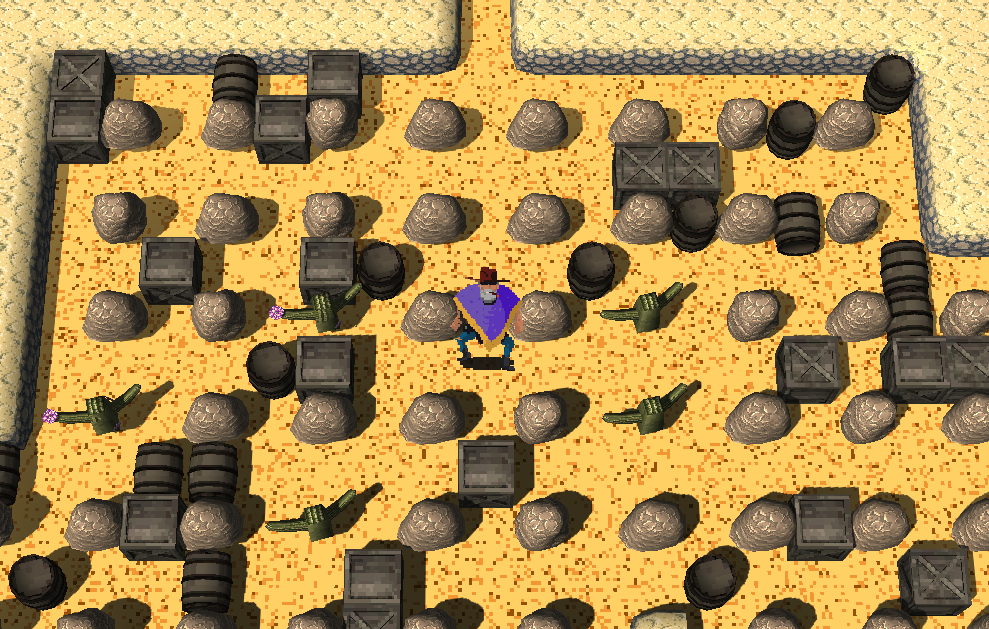 Right now it looks like this. Our general rule being that everything interactive is 2D and the rest is made in 3D. 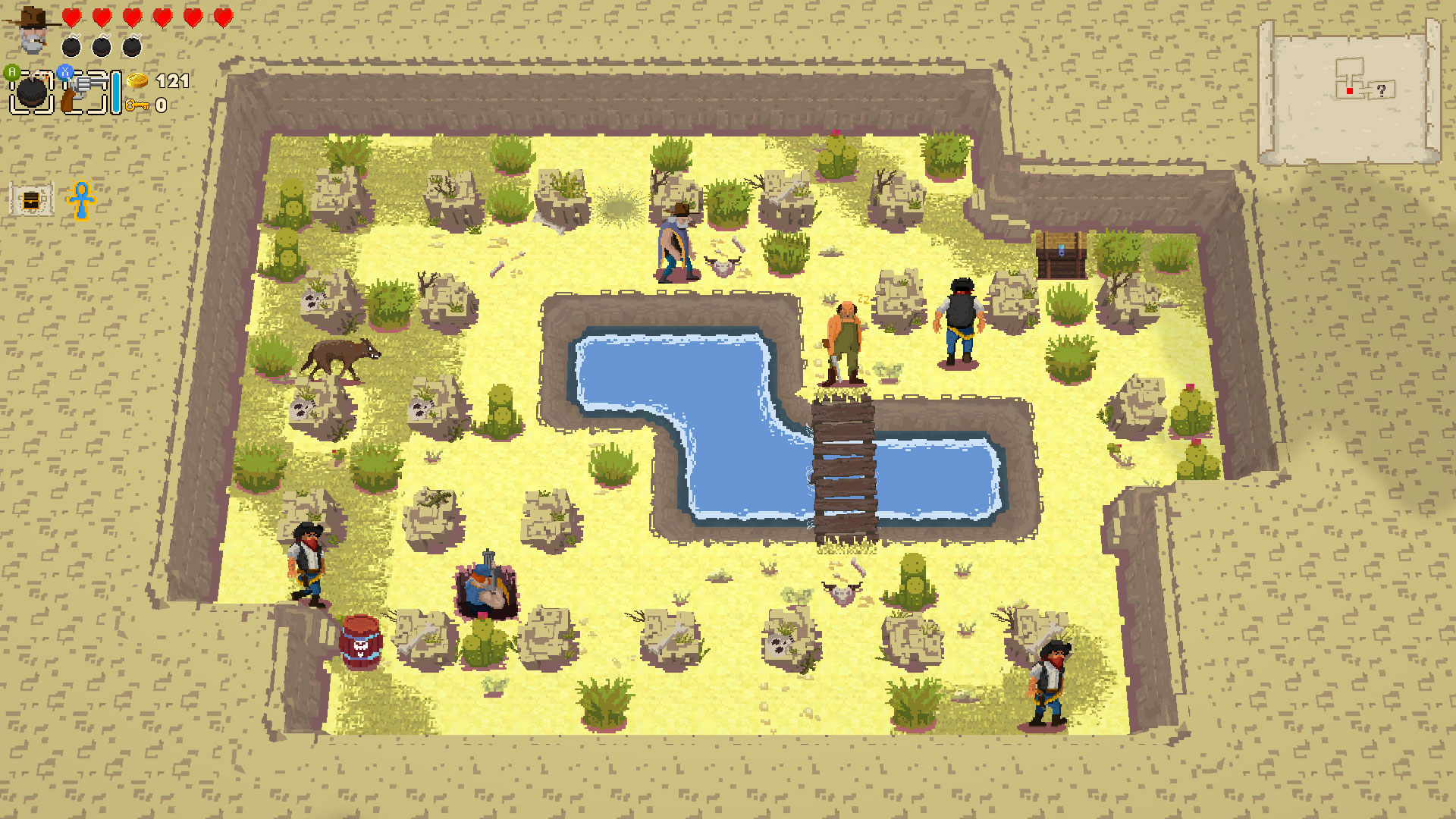 At that point in time, we were financing Bombslinger's first year of development ourselves, hiring artists out of our own pocket and paying us with outside activities: that was stressful as we felt always in a rush to complete stuff.

Everyone agrees that game development is about iteration...in our case iterating on zero budget felt like every small decision, every little thing we wanted to try would potentially put us out of business.

Fortunately, things are better now: since the the beginning of 2016 we got the help of a local Belgian fund (thank you VAF game fund <3) meaning that we have the luxury of being able to afford art, full time \0/.

The Bombslinger character was drawn by Hubert Seynave of IMOV Studios on his free time (he's a super nice guy). We asked him to create a poncho-wearing worn-out Saul Berenson cowboy (great beard!). 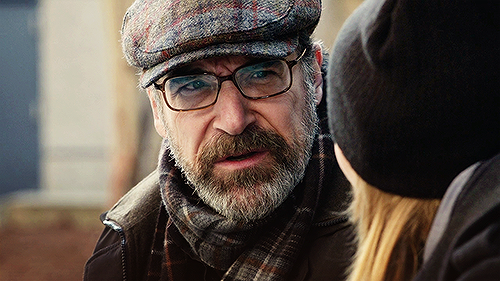 Hubert now works with us full-time, creating all the game characters and plenty of other things.

We still encountered the issue that Hubert was meant to come up with the characters, draw them in pixel art and animate them.

Since we chose to go with a traditional frame-by-frame animation style (instead of bone-based animation), animation is probably were most of our art budget is going right now (more on that below), so we wanted to free some of his time to focus on that.

Lucky us, we got some help from the fantastic Patrycja Skrzynska who did a fantastic job as a concept artist. She joined us for an internship and did a great job coming up with incredibly cool visuals. 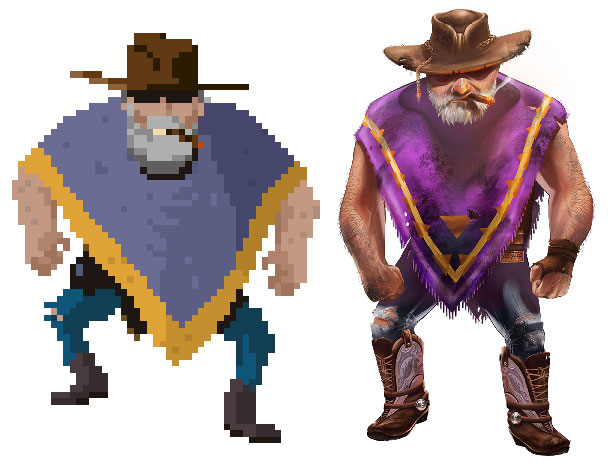 She retro-actively drew a concept art of our Bombslinger, tons of enemies and really helped us visualize this world we were creating!

When it came to producing pixel-art versions of our characters, we iterated as well. We started out with 32x32 characters (by our friend Igor Sandman) who looked very cool indeed!

Eventually though, we decided to go for a more detailed approach, most likely inspired by our love for Lucasart’s golden era characters. 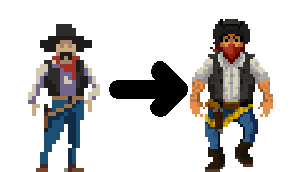 You can see that same Lucasart inspiration pretty much everywhere: the full-screen pics style we have in the (temporary) introduction sequence are inspired by Full Throttle while enemy characters are reasonably Monkey Island-ish. 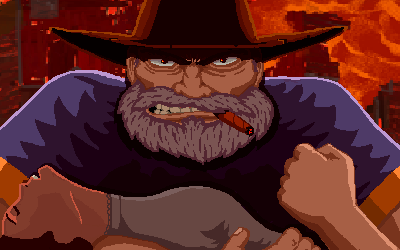 The same goes for our first announcement trailer, by Pierre Mousquet, also at IMOV Sudios!

How our art backfired on us

Eventually, the decision to blend 2D and 3D backfired on us, badly. It becomes more technical from here on...

The major issue we’re facing is that we’re getting lots of sorting issues. We realized way too late that in terms of camera angles, most of the RPGs I mentioned above actually had more liberty than we do and most of them weren’t top down at all!

In Bombslinger, we’re bound to an almost top-down view. Lowering the camera would hinder the gameplay and all Bomberman games that attempted that are now remembered as "the bad ones".

What it means is that our camera-facing sprites clip through a lot of things. As far as we know there is no way easy way in Unity to sort the entirety of 2D and 3D objects based on their z axis position so in the screenshots below you can see the head going in the rocks because the sprite is sorted based on it's pivot point (at the bottom, used for placement on the grid).

note: you know of something, let us know! :D

We did some research on how to solve this issue and funnily enough that’s how they solved it in Zelda, a Link Between Worlds.

Smart, but not really something we considered: redoing all our assets would be time consuming and we're using tile sets for the levels, where everything needs to fit together perfectly, which doesn't make things easier in this case.

Right now, we’re sorting this (!) by having the characters not totally face the camera and making them rotate less. It’s a workable solution but one that makes the characters' rotation apparent when they are on the edges of the screen.

In all fairness, no one notices, BUT I KNOW IT’S THERE >:(

Also, in some special cases like the boss rooms, we’re doing some trickery to dynamically swap rendering layers, although that produces some glitches as well and it's fairly heavy handed.

The Mode4 core team is made of Ferry Keesom and myself Andrea Di Stefano: we're not the most experienced gamedevs out there but we've been working in games for a while now and we're supposed to know our stuff.

Well...not so much apparently as we totally misjudged that a Bomberman-style gameplay requires 3 times the animations of a side-scrolling game since every animation needs to be drawn from the front, back and side (we flip the side view when needed, 'cause everyone in Bombslinger is ambidextrous^^).

This is an area where the frame-by-frame animation becomes really production-intensive and right now our production times for a regular enemy is between 4 and 5 days for an enemy. 2 weeks for a boss.

We still stand by our choice since we think traditional animation looks great but when we're tired and vulnerable, we sometimes wish we chose bone-based animation, even only to reuse the humanoid animation curves.

We did it backwards but we're happy

Visually speaking, we're reasonably happy with the result and we hope you guys feel the same way. It was kind of a weird journey starting creating Bombslinger with no artist on board and seeing the game world take place concurrently with the game itself.

So yeah, we kind of did it backwards I guess. In hindsight, I don't think we could have done much differently as we started out penniless and with no artist on the team. But it's a lesson learned for our next project!

Oh, I haven't touched on the 3D art part much yet but I will in the future!

Anyway, if you'd like to test Bombslinger, it's available right now on Steam Early Access. It's work in progress, we think it's already pretty fun but we'd love to have your feedback!

We just updated the game with some new features among which a new intro room which looks pretty cool when it comes to mixing 2D and 3D. 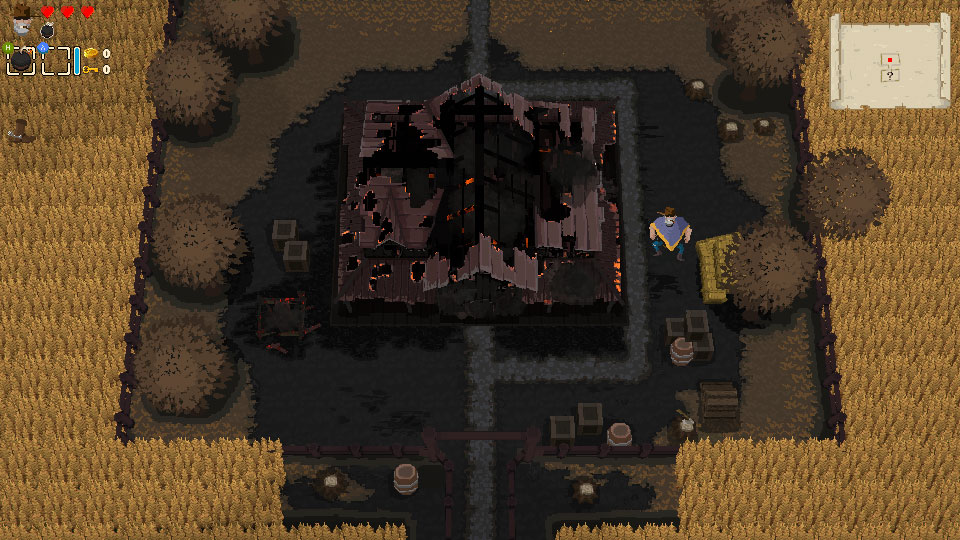 AS someone who also loves the PSX style, and am trying to make my own game in a PSX way, Your story hit close. I wish you guys luck, and hope to see more from that era of Games come back

Thanks!
It's kind of tricky though as many games from that time don't hold out really well. Some of them do, like FF Tactics or Breath of Fire IV because of their timeless art direction.
So I guess that the best approach is making the actual look of your game correspond to the memory that you have of that era.

OR just go total hardcore and do texture distortions like in those days :-D

Well it's good that I still own the game I'm being inspired by. But it's a different game. I still wish you luck

That shop WIP screenshot looks awesome! Definitely like the visual style that this game is going for, plus this was a nice read I suppose. Definitely pretty interesting to see how different developers work around different limitations. I'm currently learning programming with a video game focus, so it's interesting for me to see how seemingly impossible tasks can be done. :P

Well anyway, I've never heard of this game before but it certainly looks neat, so I may have to pick up a copy eventually. Good luck as you work towards a full release! :)

Thanks! I don't know if we handled it as well as we could have...but
I have to say that finding that asset pack on the Unity store was a blessing. We could have done it with cubes but that helped us get to "the feel" quite fast, which was especially important to get outside feedback (we observed that most people can't really see past the prototype-looking assets).

Funny story: for a while we had testers struggle with the main goal of the game ("where do I need to go", "what do I need to do", etc.).
At one point we added a very basic intro (just because it was cool, no real purpose) showing a burning house and the Bombslinger coming out of it with his dead wife. Unexpectedly, that helped people understand that they needed to fight for revenge and we never heard of that issue again!