A linux build and wall blasters! These past 2 weeks have been a soup of a lot of behind the scenes stuff.

Posted by ChocolatePinecone on Mar 26th, 2020

I don't have much to show this time. I've been really busy with behind the scenes stuff like setting up a linux build and fixing bugs.

I decided to build on linux early to avoid big surprises just before the demo release.

I'm currently very well on track for the demo release. I set a deadline of Q2 2020 for myself, and because my office day-job hasn't found a new project for me I've been able to cross huge points off the to-do list.
The demo will still be pretty rough/unpolished though. I want to get the basics and some level components in there asap and let the discord community enjoy it sooner. They've been supportively waiting for so long that I want to do a closed release to them first.

Some other minor changes I've done in the past weeks besides bug fixes:
- Let the player lose a life when out of fuel and landed - This way you don't get stuck with no fuel and no way to continue except to restart the whole level
- Adjusted initial cable length to only the needed length instead of the maximum allowed length - Improves overall smoothness when grappling during flight
- Added a scoring system - Score is determined based on lives left, fuel left and time taken to complete the level

The latter can be seen in action:

Scoring will be shown after level completion and in the level selection menu: 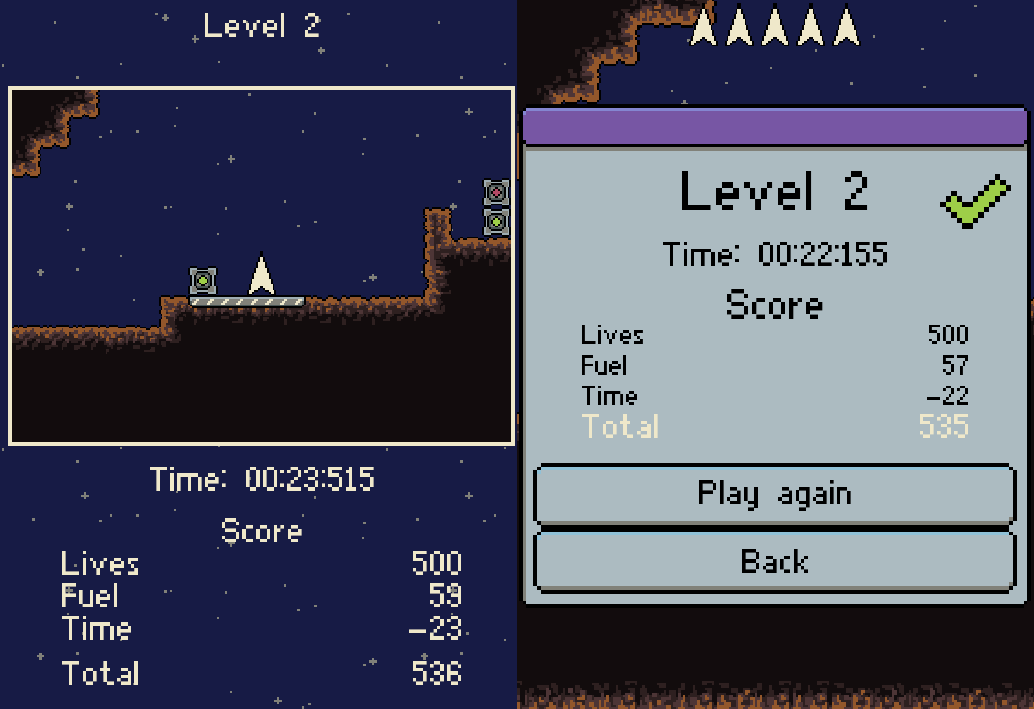 Wall blasters are taking way longer than anticipated. I'm not finished yet, but they are well underway.
Wall blasters will periodically shoot a bullet in the direction they're facing. That's about it.
It sounds simple, but shooting a bullet, bullet impact and integrating wall blasters in the editor really took a lot of time.
The wall blaster paved the way for a lot of future stuff in different ways. For example, I didn't have any code that restricts placement in the editor. Wall blasters need to be mounted on a tile, which means they can't be placed in mid air.
I now built a generic way of checking if a spot adheres to specific rules.

Checking if a collision happened with a specific type of object (a bullet for example) was also not possible, so I also built a generic solution for that as well.

I can't even remember all the other needed stuff, this all took too long.

Here's how it looks now! Don't pay attention to the ugly bullet:

As for the next period I'll be focussing on some new features such as:
- Big space doors
- Damagable crates