Hello everyone! in this article we are going to cover the main gameplay mechanics behind Beat Beat Shooter and its Beat system.

Posted by MissingDragonfly on Jun 28th, 2013

Hello everyone! in this article we will cover the main gameplay mechanics behind Beat Beat Shooter and its Beat system (Note: This is all a WIP and some mechanics may change in time, if that happens we will make sure to update this accordingly). First, let's take a look at how the game looks like regularly while in a level: 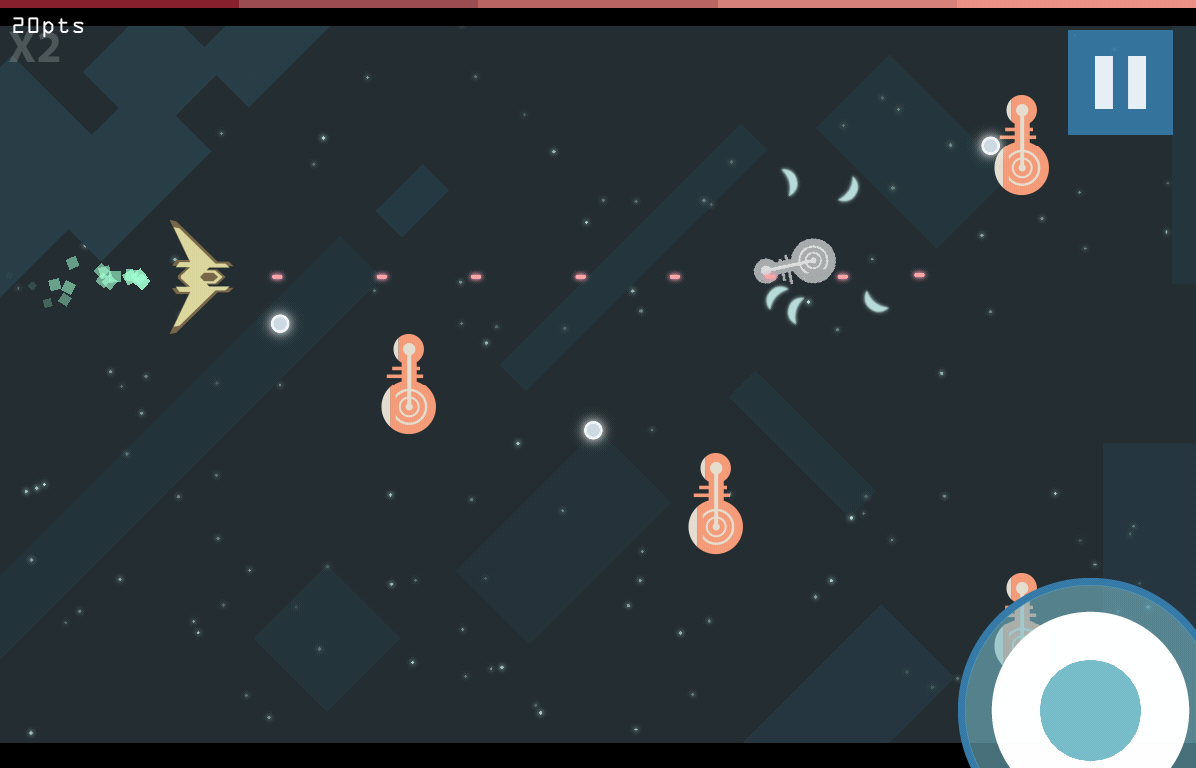 Looks like a regular horizontal shooter, right? While there are certainly some obvious shooter elements on screen, lets break it down and take a look at each element just to be sure what are we looking to: 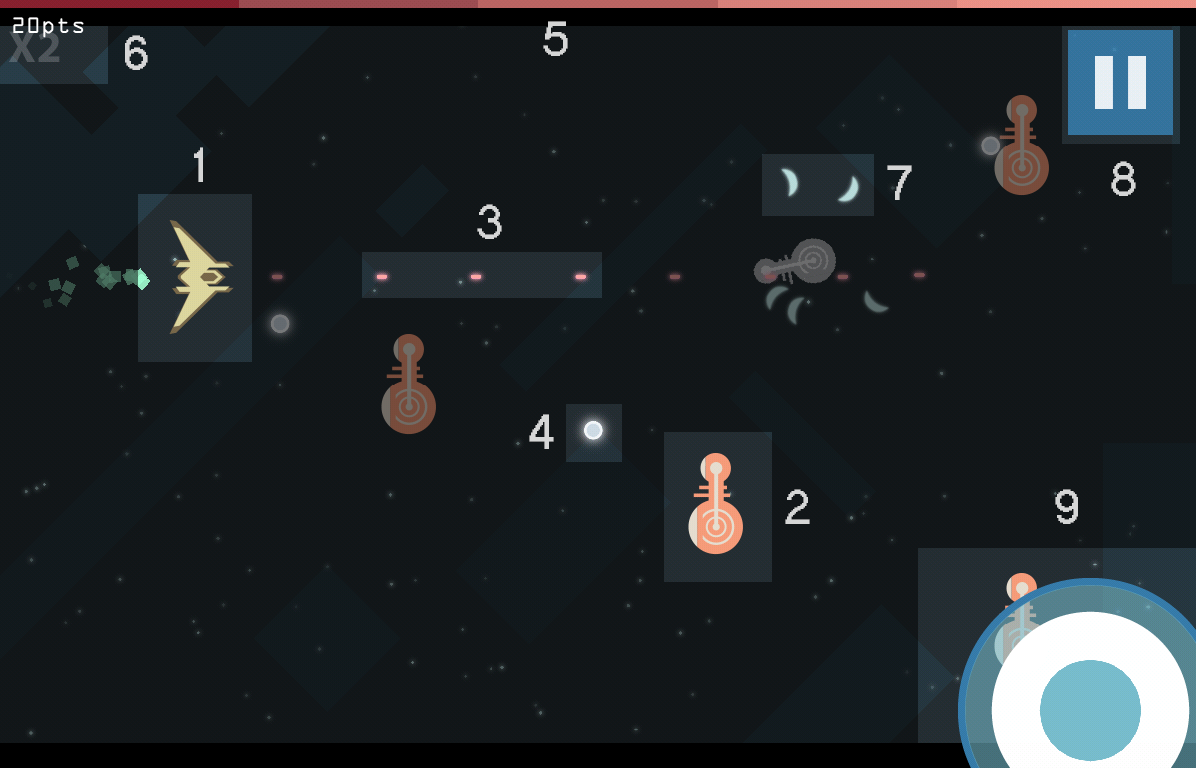 So, let's see, everything from 1 to 6 are standard elements from a 2d shooter: you move, shoot enemies, they come and shoot at you too, if their bullets hit you your life will deplete and when its empty you will die, and finally the points and point multiplier to get a high score in the level.

7 are Shards, they are these little fragments that you collect through the level by destroying enemies, the shards you collected stay with you after clearing the level and you will be able to use them to unlock other things in the game, we will talk about this in more detail later. 8 is a pause button that will stop the gameplay and bring the pause menu, this button will only be visible on mobile devices.

So finally we’ve reached the 9th element: the Beat indicator, and with it it’s time to explain the rhythm part of the game and how it influences the gameplay.


The Beat System works by rewarding you for being in sync with the music of the game, what this means is that by making several successful beats consecutively, the game will reward you with several things such as: more raw power for the ship (firing more bullets at a time), the ability to use different types of power-ups and you will be able to see and hear the evolution of the world both visually and aurally respectively. Let’s see the detail of each element in the Beat System in order to understand it well, shall we?

Remember the Beat Indicator we saw before? A Beat is the action that occurs when you tap on the Beat Indicator (or press the designated key if you are playing on desktop), of course just tapping the indicator by itself won’t yield any result, you need to make a beat the moment the music itself plays the beat.. wait what? Ok, let me go at it again: The music of the game plays an important role on this, at first the music will only be composed by the beat of the song, and the beat will sound each certain time.

So, in order to make a successful beat you will have to sync yourself with the music and let the song indicate the moment you have to perform a beat, if you do it at the right time you will have made a successful beat, or a wrong beat if you do it too early/too late (a good example of this would be patapon if you have ever played it!). The role of the indicator is to also reflect the right moment to perform a beat visually, it will fill up up to the moment of the beat and then scale down after the moment has passed.

Performing a successful Beat itself won't bring any instant results, but performing several successful Beats consecutively (let’s say, 4) will result in a Beat Chain, having completed several chains your ship will level up and at the end of each Beat Chain your powerups will be enabled and you will be able to choose and activate one of them at that moment, it will look something like this: 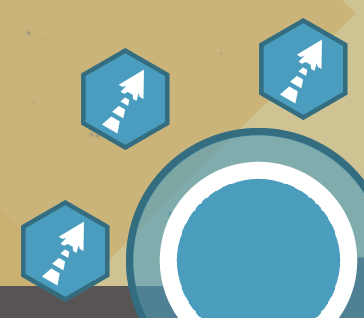 With each icon/button representing their respective powerup (Note that in that image all images are the same, but that will change in the final game). Powerups will come in different types but as of now we cannot provide a detailed list of what you’ll be able to unleash in game, we will keep you posted though!

As for wrong beats, it will have both the effect of breaking a chain (restarting it to zero successful beats, so you have to start over again to complete a chain) and if you fail too much your ship level will decrease.

- What does the ship level work for?

The level of your ship is both relative to the raw power of it (Damage and amount of bullets shot) and the way you see the world around you. I think images speak louder than words (and videos even louder, but that will come later), so lets take a look at some of them: 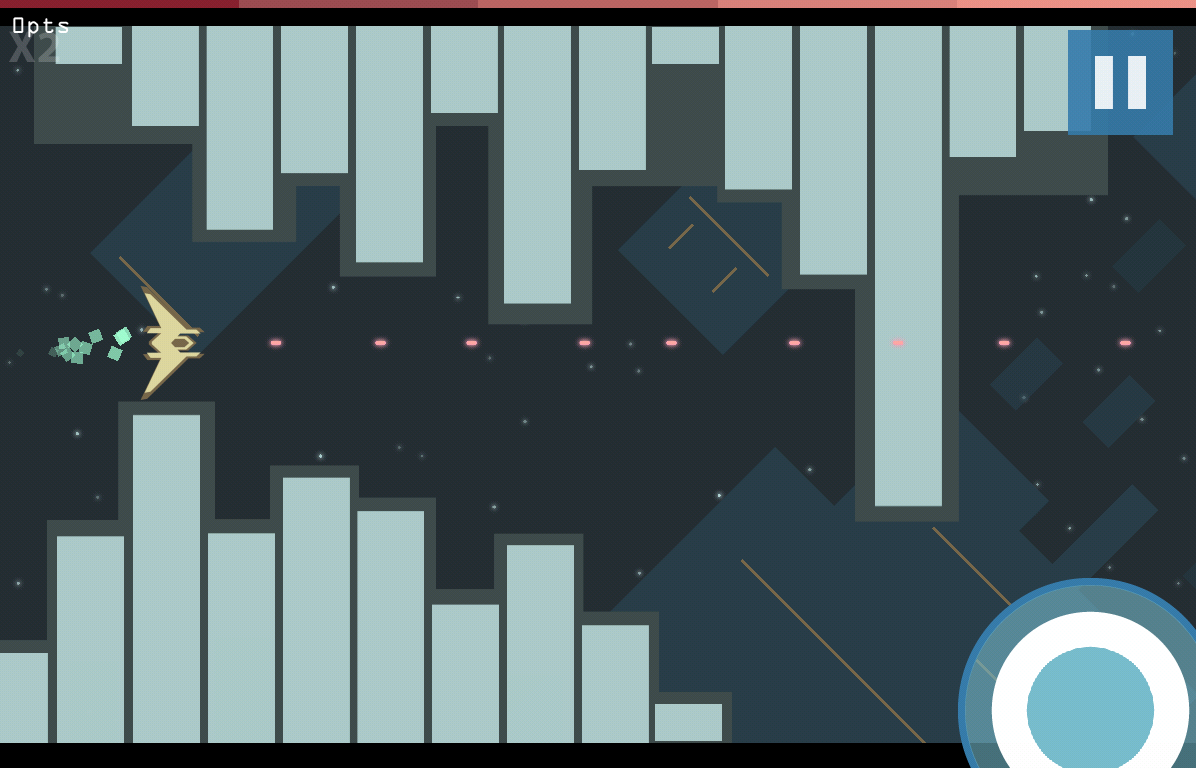 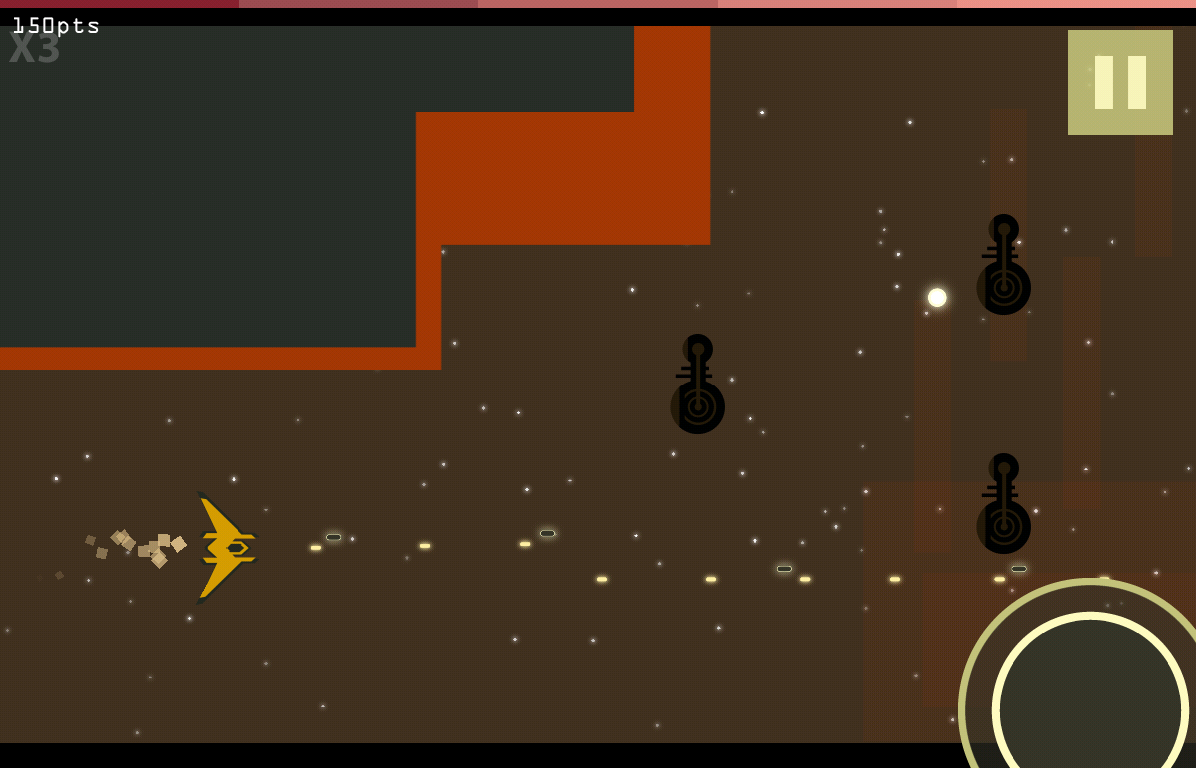 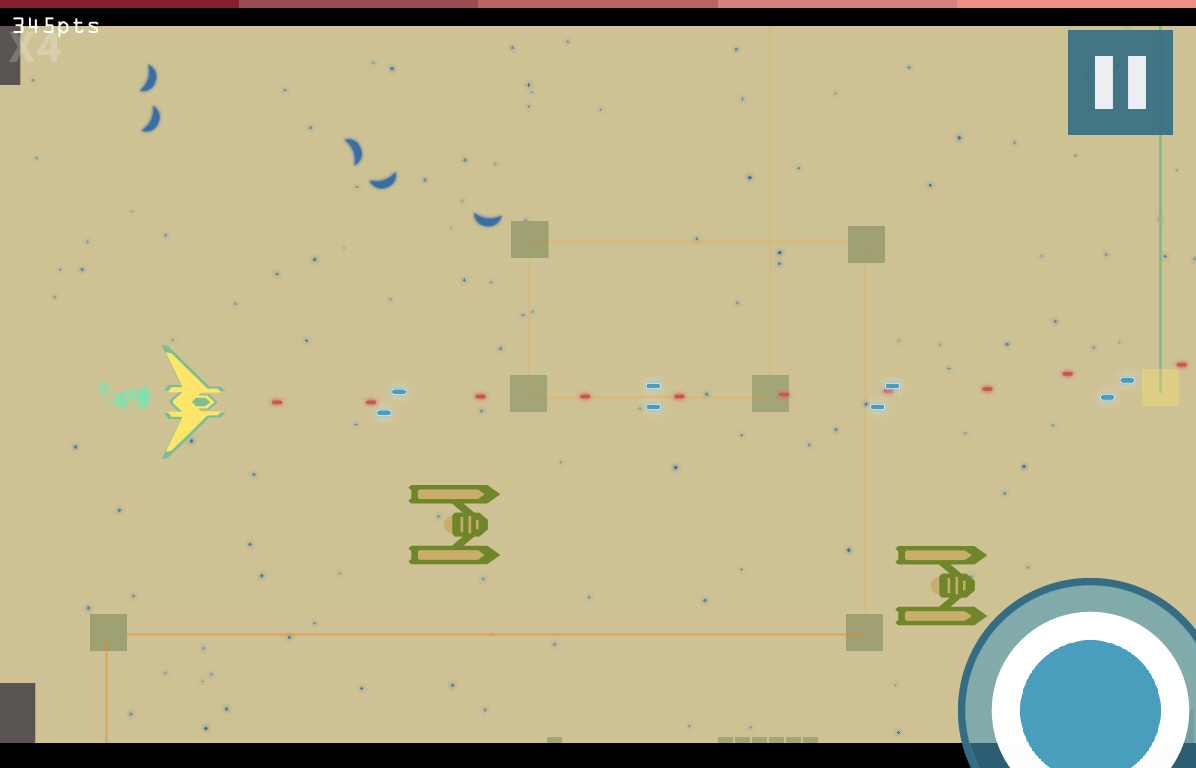 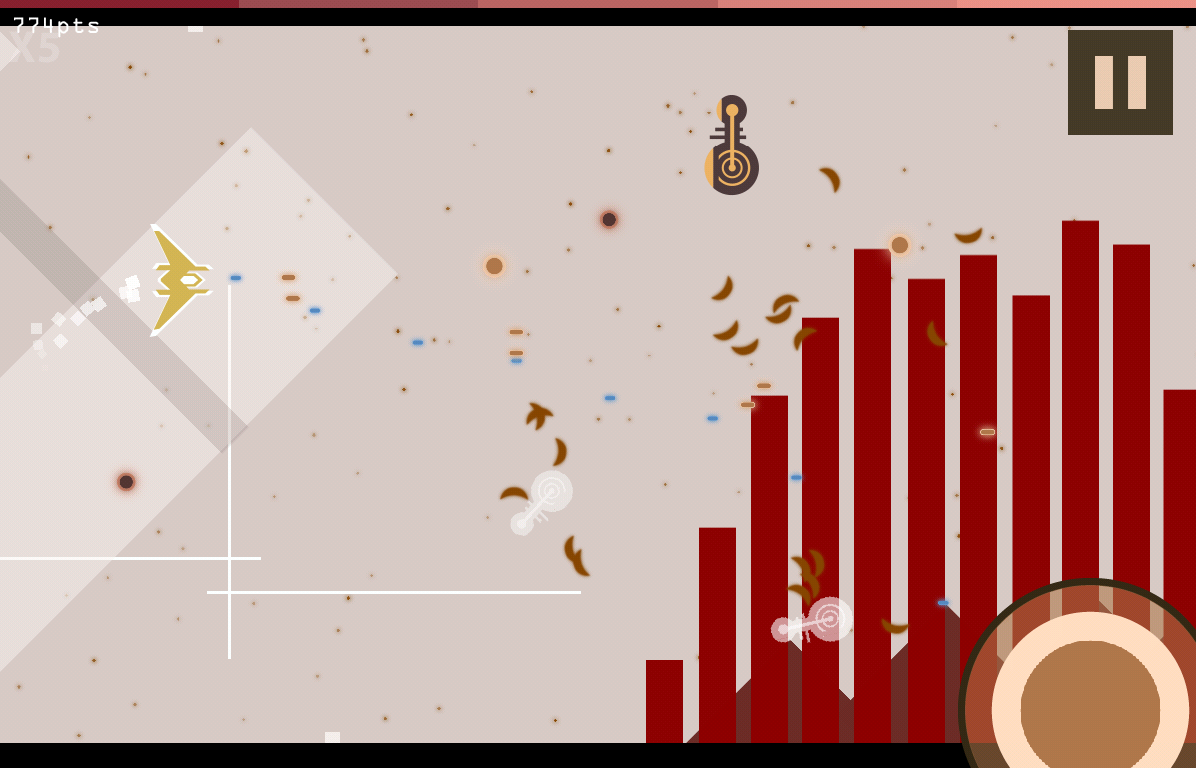 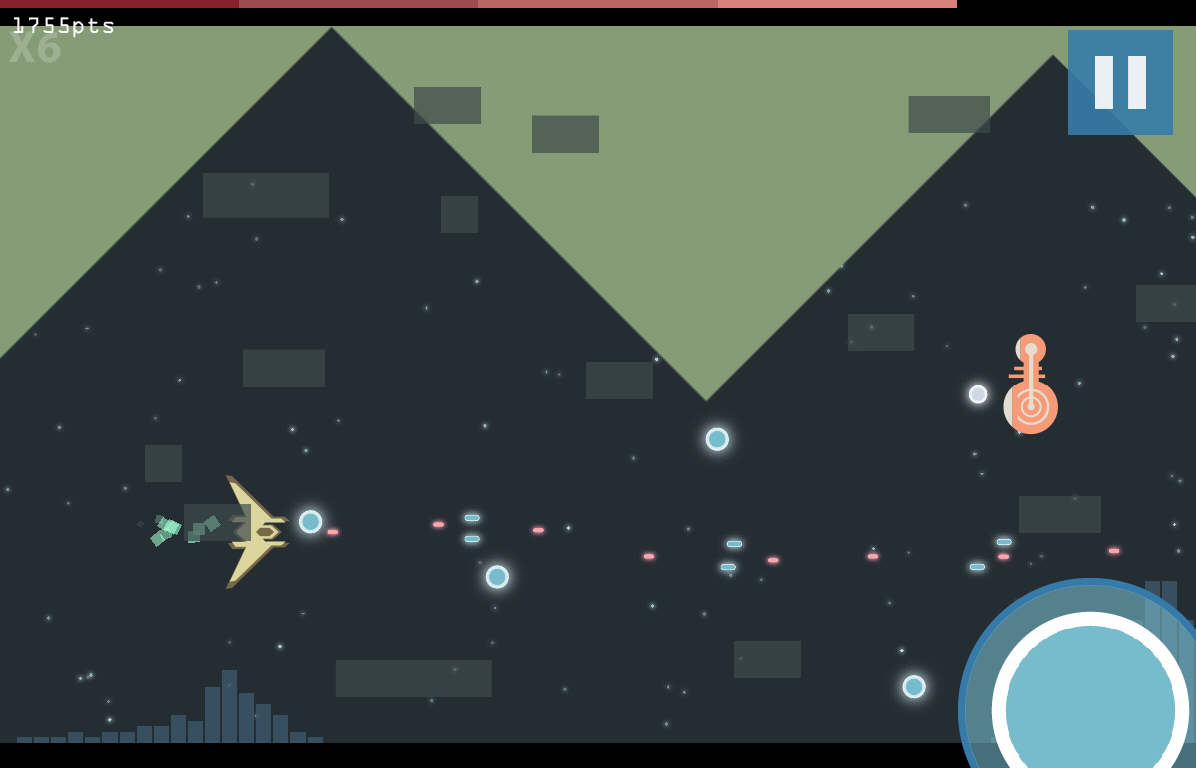 Pretty nice huh? as you can see keeping up with the beat has some really great benefits, and it doesn’t just end with this! when you play the game you will notice that at max level the music will be at its full form, and believe me, you will want to hear the awesome soundtrack we are preparing for this.

And I think with this we are done covering the basic gameplay aspects of Beat Beat Shooter, as always if you have a comment or a question don’t hesitate to tell us! We will be glad to hear from you.