A quick overview of the game from the elementary tetrad to Jesse Schell's analysis. This tool helps me a lot in different situations, especially when brainstorming a new game, a new mechanic or simply for a new feature to add.

I've always had some difficulty with my game analysis:

I present here one of the tools that helps me to better understand a game.

This view separates a game into 4 interdependent elements: aesthetics, story, mechanics, and technology.

The diagram below shows the links between each part and indicates the visibility of the element by the player. 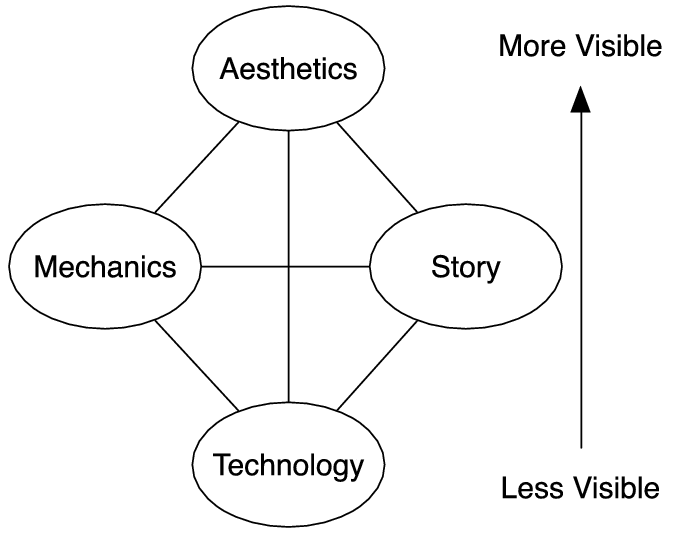 The 4 basic elements of a game by Jesse Schell

It is the player's entry point into the universe of your game: it gathers the graphic and sound elements that will create the desired atmosphere. To help describe this element, it is interesting to think about a lexicon to describe the atmosphere of the game.

This is the sequence of events you will present to your players. You can be careful about how you reveal the story, whether it is linear or evolving based on the player's choices. An important point to consider is the player's interest curve, which will depend greatly on the order of your events.

This element is what differentiates a game from any media that seeks to produce an experience (film, music...). It includes the laws and rules that govern your universes, such as the actions the player can perform, the way to move in space, or the way time passes in your game.

The almost invisible element for the player... But to be taken into account as a designer! It gathers the technical means and the tools which will allow the development of the game: we can think of a physical engine for a video game, or cards or dice for a board game... Each tool has its limits and you have to make sure that it will be able to meet the needs of the game created by the 3 other elements.

These 4 elements form a whole: the game you will create. All the elements work together to create the experience the player wants.

Finally, I will share with you a very concrete example that created the trademark of one of my favorite series: the fog in the Silent Hill series. This mechanic reinforces the aesthetics of the game and allowed the developers to get around the technical limitations of the engine at the time.

What would have been Silent Hill without its fog ...

And that's it! I hope this overview will make you want to continue discovering this analysis tool.

Here is an introduction to the elemental tetrad that I hope will simplify your game analyses. Here we have seen the (very) basic outline of the 4 elements that describe a game.

But it is a tool among others and it can be interesting to look at other methods to complete your analysis. I can advise you on the "Mechanics, Dynamics, Aesthetics" approach which gives a new point of view and can allow a better approach depending on the situation.

Thank you for reading this article.

This article is originally published on my personnal blog.