This is a basic introduction for people who started using the cryengine3. This is intended for non-programmers learning to set-up the solution files.

Setting Up The CryEngine3 Project

The prerequisites of this tutorial are having the following:

Once You have both of these installed open the CryEngine3 SDK folder. Open the the following path Code\Solutions\CryEngine_GameCodeOnly.sln . You will then open this with Visual studio, which contains the game code. Once opened in visual Studio. The project in the solution you care about is called "CryGame" This is where all your C++ implementations will be done.First right click on CryGame and Click Properties as shown in the picture: 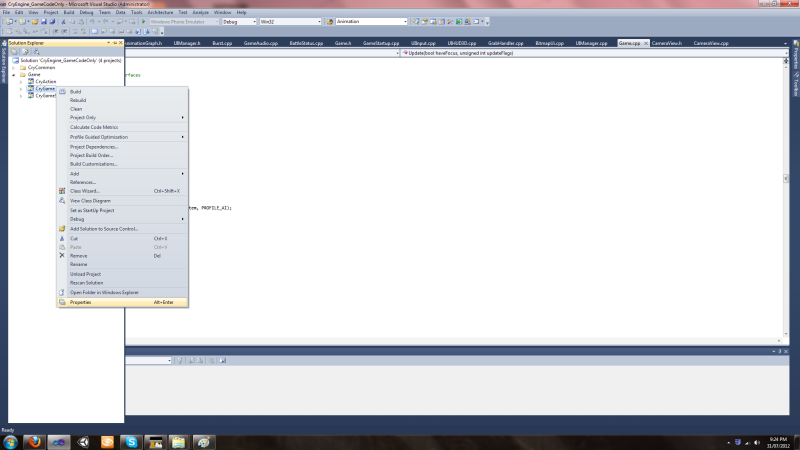 The Next step is to set the output and configure the debugger(F5). Once you clicked on properties a new window will be shown as follows: 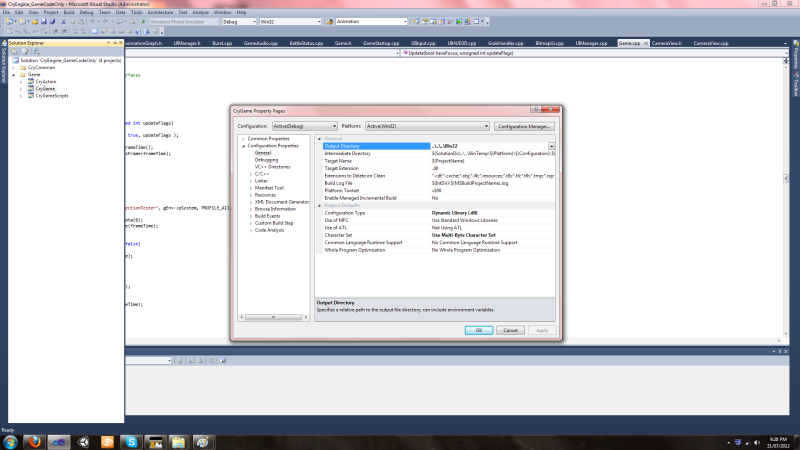 Where it says output directory, you want to click on it and browse the location. Set this location to the bin32 or bin64 folder( which ever you prefer). Once this is done. Click on Debugging on the left side in the categories. In debugging Where it says command. Change the location of this to your launcher.exe file either bin32 or bin64 folder depending on what you chose as the output folder in the previous step. Take a look in the following figure: 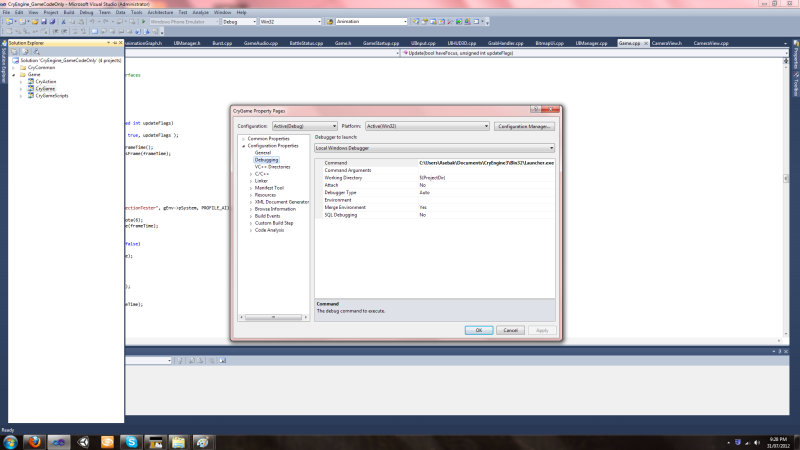 Now those two steps are done. Your solution is ready for compiling and debugging your solution:
For example if you right click on the "CryGame" and press debug and start new instance as the following picture: 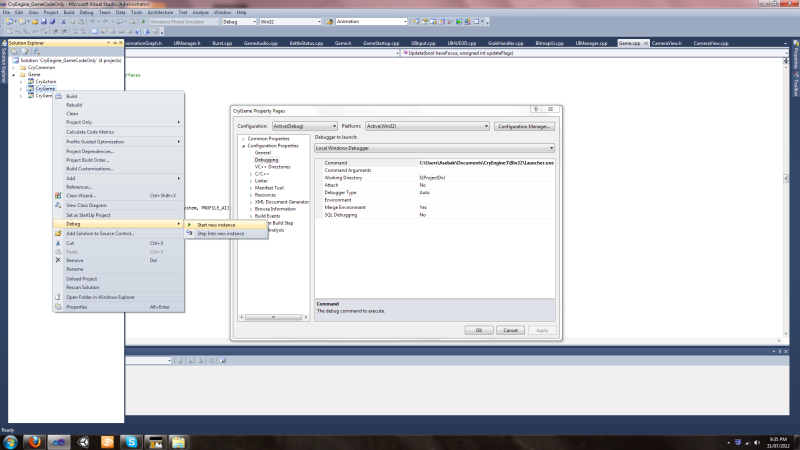 Your Game will compile and will affect the launcher with the changes you made: For example this is a code that I affected the main menu with my own flash background of wolfenstein enemy territory: 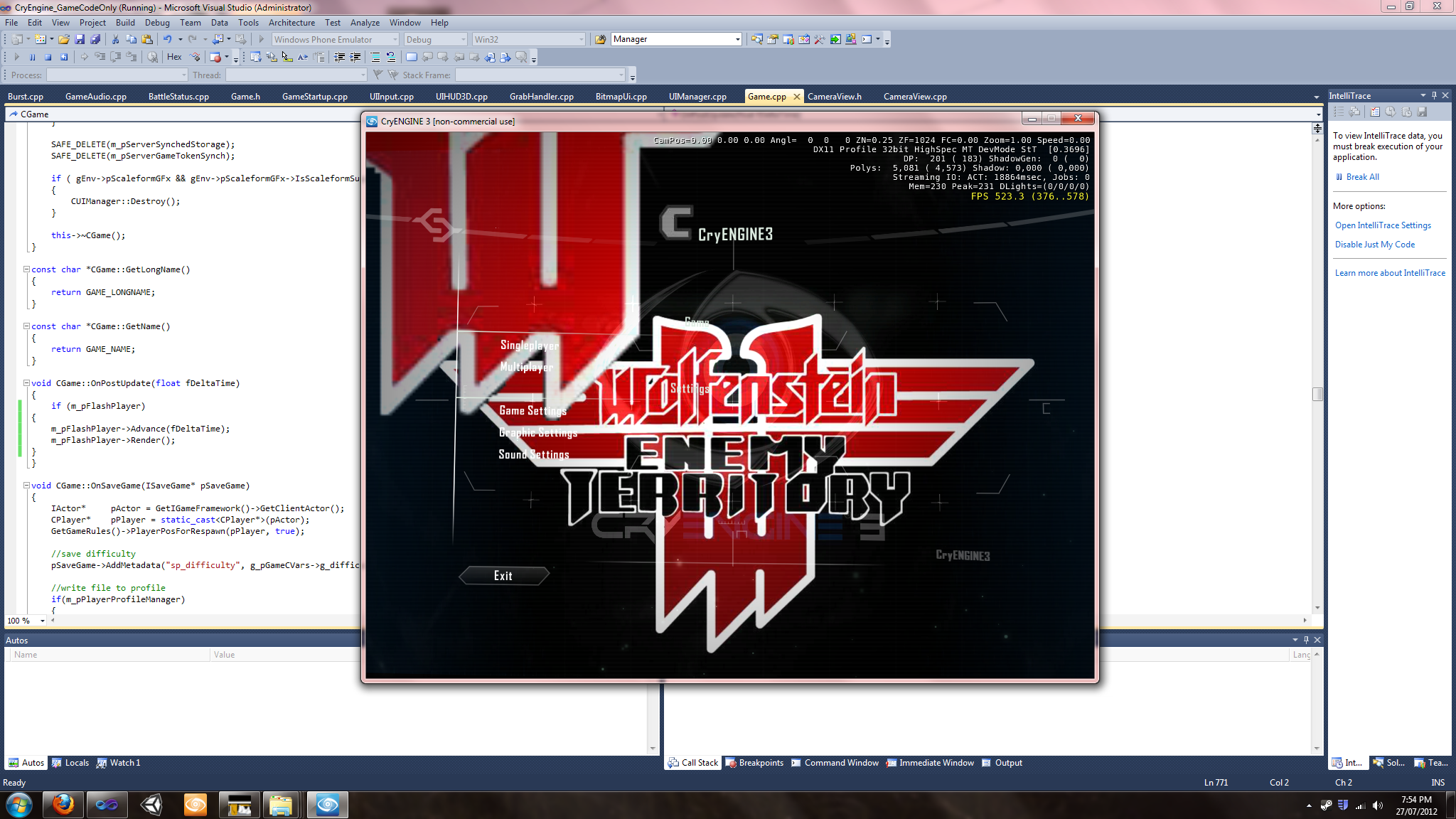 I will make a follow up tutorial later on explaining some of the .cpp/.h files.

Thanks for the tutorial. It compiles up to the following error, "cannot open include file 'afxres.h'". Any idea what's up?

Ah, this thread sorted it out Crydev.net

So it compiles for you?

yes.
The code is supposed to include windows.h instead of afxres.h in the express version, but the if statement didn't seem to be working

oh ok, i dont have the express edition. so it must have been from that, my version worked completely fine

yes, that's the cause of the bug listed in the thread

just an fyi, I have tested out the CryEngine3 Solution for visual studio 2012 and it works perfectly fine. Its better for C++ than Visual Studio 2010 because it has intellisense in it.

I replaced afxres.h with windows.h (the problem is actually caused by the MFC library not being loaded, so it can happen in the full VS as well), but when I compile I just get 'Failed to load the Game DLL!'