If you need the exact width and height of text you will need to iterate through each word to check for word wrapping.

In my game Dave-Man all the characters speak in little text bubbles. Some short, some long, some just one word. The bubbles looked awkward with extra space so needed the exact height and width so words don't get cut off. 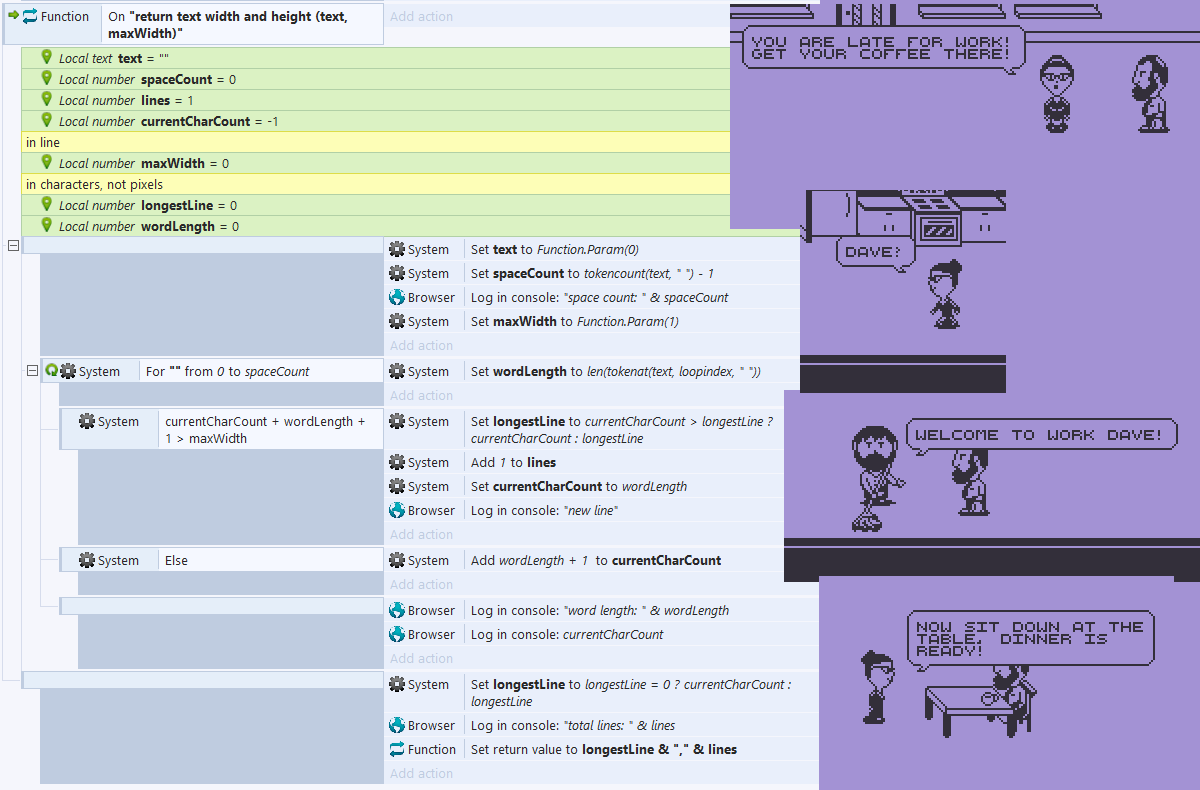 It seemed well received so I thought I'd make a little "Tutorial" post walking through the steps of the function. The game engine I'm using is Construct 2 but this is a simple function doing some math and returning values so should work in any engine or language.

I wasn't sure it was worth tackling at first and just simply just took the number of characters divided by the max characters in a line. Round that up and it is the number of lines. But that doesn't work due to early line wrapping, which is especially problematic with larger words. You also can't always use the max width as if all the lines wrap early the width required is smaller.

Thinking the solution through in my head seemed a bit tricky to get perfect so I procrastinated but eventually important words getting cut off got me to take action. I found it really isn't that complicated, as others that have tackled similar would probably agree, so hopefully after I break it down you will agree and implement something similar if needed.

So without further ado, the function: 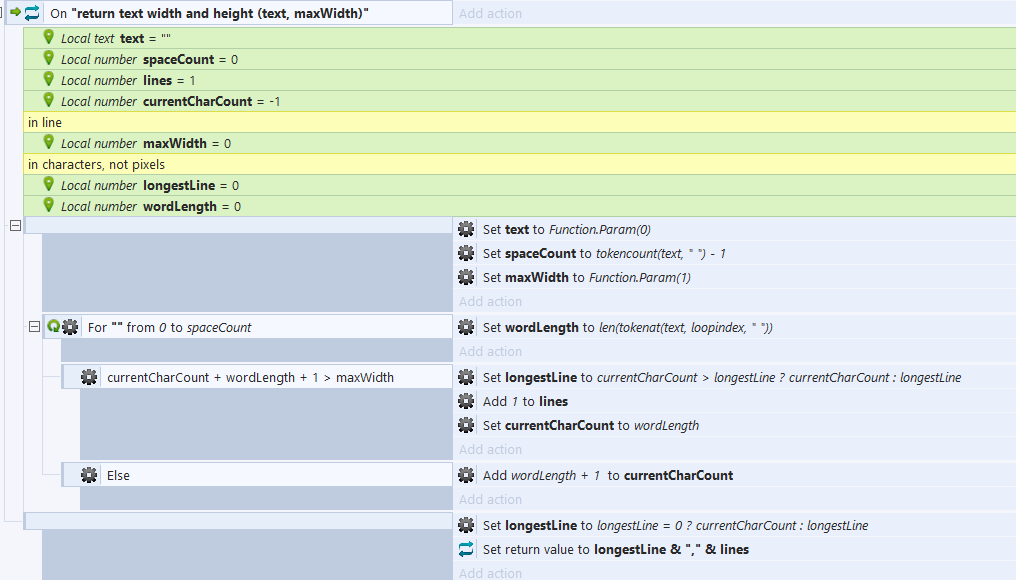 First off the function is passed a string of text and a value of the max characters you would like in a line.

If you are following along with the image you can see the local variables I created. I prefer to use more than are usually necessary just for readability of the math throughout the function. For example, function.param(0) in Construct is the first parameter passed to the function. So there is really no need to set that to a new variable as I could just use function.param(0) throughout. I believe the readability though is beneficial and can help cut down on errors in revision.

First I grab the number of spaces in the text since my text boxes will only wrap on spaces. Construct has tokencount and tokenat expression. Tokencount basically just returns the quantity of a "token" (string) in a string. Tokenat is passed a "token", which is just any string you choose, and an index then returns the string between the "tokens". So if passing a space as the token it will return the words. But if you aren't using Construct you don't really need to understand this, you just need to know how to do it in your language of choice. For example, in JavaScript you can use the indexOf method.

The function then loops through every word in the text, which I use the number of spaces to do. I will grab the length of the current word using the tokenat and the loopindex. Len() in Construct simply returns the length of a string.

If the line does not wrap then currentCharCount is incremented by the current word's length plus one for the space.

Since I only set the longestLine variable when a word wraps it never gets set if the text is only one line. Therefore I use another ternary operator to check if longestLine is zero (the initial value) and if so set it to the text's length.

Then I return a string with a comma separating the two values. In the code calling this function I use the tokenat to parse the string, using the comma as the token.

Note in the initial variables:

Let me recap the steps in bullets as the steps may be a bit different in different languages: