So a digital game can work properly with the RP enforced system, there are a few rules that must be followed;


RP stands for roleplay, but the style of RP on byond games may be different of the table roleplay or forum roleplay you are used to, cleary we have diffrences, and to keep the roleplay working there are a lot of rules that must be enforced. 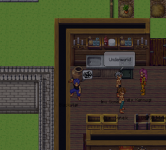 IC and OOC: a decent roleplayer must know the difference between those, and apply them in your gameplay, Your character on Azusa is a person living in the world of Azusa, and you are a human playing a computer game, One is called IC and other called OOC. You may want something, but your char may not, so while playing you must act as your character and give him his decisions, not just yours... As if your char was a book character that we are writing, (I say we because the story in the RPs are developed by the interaction of a group of characters and the way facts happens in your characters life.) There are two chats to organize IC and OOC, the red one (space bar) is a global OOC chat, where people are talking with people about any subject. But the IC (say) is what your character is saying, and is seen only by nearby people. You can say OOC subjects in say if you seppear the OOC subject with bracklets for example:

Metagamer: The metagamer is the player that forces situations for his roleplay in stupid manners, for example, he wont RP with someone that wouldn't bring him usefull stuffs but will force some RPs with important players just to get a bette role, or the metagamer is also the guy that places his OOC subjects and wills to change your character situation, for example: My char love pickles and is kind hearted just to RP with a farmer and get food from him, once I got the food I suddenly (without an IC reason) change my char personality to someone mean with everyone just to get a chance on acquiring the "Meanness armor" . DON'T BE THAT GUY! If you are good to separate the IC and OOC you will be good to avoid being metagamer, when you interest a lot more in the reall roleplay (interactions and story development) more then just status you will get a lot more fun and will be signed as a better RPer​

Godmoder: Well, the godmodding is basically Roleplaying something your char can`t do, for example while you are just a farmer, you RP dodging an attack from an Elite Warrior that probably is 30times faster then you. Or godmoders are the ones that want to ignore their status and power limitations in a combat and act like a super powerfull dude. DON'T BE THAT GUY! The fun on RPs isn't just about wining, wining is fun too, but the development of your characters cant jump steps or it wont even be fun to play... Act as someone strong when you are infact strong, act as someone weak when you are weak and you will be fine.​

Rewards: There is a verb called Roleplay(B button) there you can describe your characters actions, to give it some life and action to the game. The Roleplay verb is really important and the good RPers constantly uses it, the roleplay not simply describe something but gives a certain value and fun to your character development. While using the Roleplay verb, write like if you were writing a book, describing the action/scene in third person. (There are some rules about don`t controlling another player in your roleplay. That goes in the godmod one..) Every Roleplay are saved in your character logs, with the date it was posted. The Admins will read everyone online logs and reward them based on the amount of good RPs they made in a day. So constant Roleplayers gets rewarded and can become stronger then player that just self train. The amount of RP points you get in your lifetime in Azusa will be saved and listed in a rank, where the top roleplayers will be listed. So this isn't also just for the power, but being recognized as one of the best roleplayers will give you chances in better roles in the future wipes etc! If you have any doubt about Roleplaying, feel free to ask ingame.​