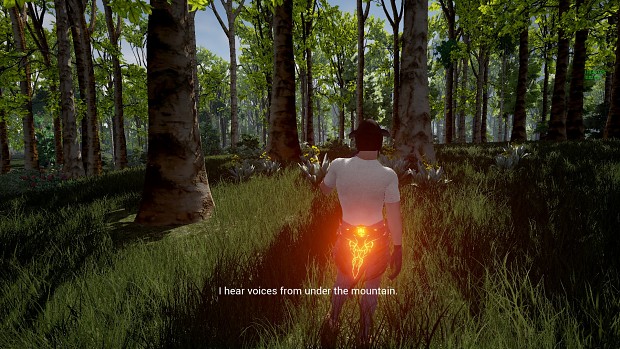 [7.01.2016]MAJOR UPDATE: Mind Control spell added: You can control most weak minded humans and creatures now. And use real hands(their hands). Here in the first pic where I show the enemy we will be controlling: 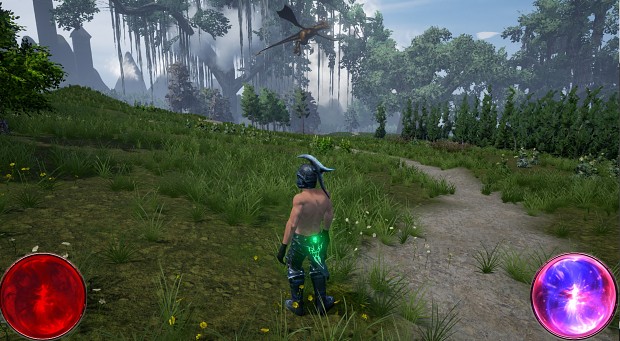 The story is changed due to feedback from gamers. It'll be revealed soon. We are getting more feedback on the game and we are sorry for all the delays, but we've improved graphics and gameplay a lot and added voices as well, that's why the launch was delayed.

[6.01.2016]Wizard base mana regen per second dropped to 0.6. Base mana gain per melee attack increased to 5. Now you can disable most stuns by hitting melee attack in time(needs fast clicking). Combat teleport fadeout time dropped from 0.7 to 1 seconds to 0.45 to 0.55 seconds.

[UpdateStart] 5.01.2016: *Most enemies' attack frequencies are getting dropped to half, excluding very high level ones(bosses if you will), notice that this doesn't refer to animation speed, it rather does animation play frequency if that makes sense. 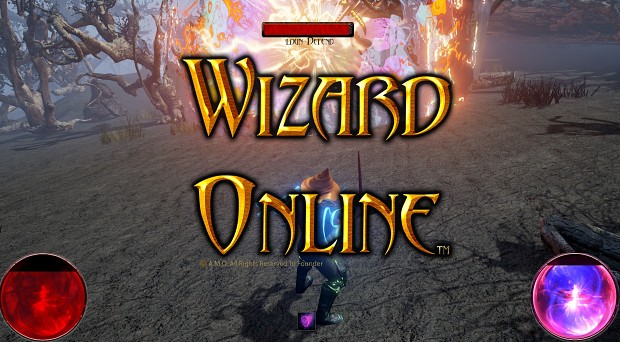 *Now each one target spell slows the enemy speed by @ to u(The amount depends on a bit luck and a bit on the spell level) We haven't missed on adding luck factor to most of the things, even if it's just a little bit, when I first tested reaper boss with 10 percent bash ability, he bashed me 3 times in a row, which is 1 chance in a thousand, we'll see how unlucky/lucky you can get.

Next info update will be about the mass increase spell, stay tuned and don't forget to share if you want to play the game as soon as possible, don't forget that we can't release the game when no one knows about it, so each share contributes to release date, stay tuned everyone.[UpdateEnd]

[Update Start] 4.01.2016: Wizard Online aims for both realism and fantasy. It is so hard to defeat many enemies that are the same level as you at once, because each enemy has disabling abilities, even if these numbers change between enemies, the smaller and general numbers are as follows:

1)An enemy generally has %3.33 chance to knock you back on each of his hits for 1.367 seconds in most cases(You are completely disabled in terms of attacking, using potions, your character is forced a few steps back, and you start bleeding.)

2)An enemy has at least 13.33 percent chance to disable you, where your upper body is pushed back for 0.521 seconds in most cases, but you don't step back and can still attack, however your attack speed is slowed by a random percentage changing from %0 to 100, and you are to bleed by 50 percent chance.

3 and last)An enemy has the remaining chance, 84.34 percent to hit you with his base damage, your head get knocked a bit, but you're not disabled at all.

Conclusion) If you take on 18 enemies, you'll be disabled 90 percent of the time, and will die shortly. You can workaround that by using items that decrease your getting knocked back chance. But even magical items don't have that, only rare, mythical, legendary, satanic and angelic items can have that attribute. More to come, stay gamers![Update End]

You can contact us at comments section down below, or on article comments, or by messaging our facebook page facebook.com/playwizardonline 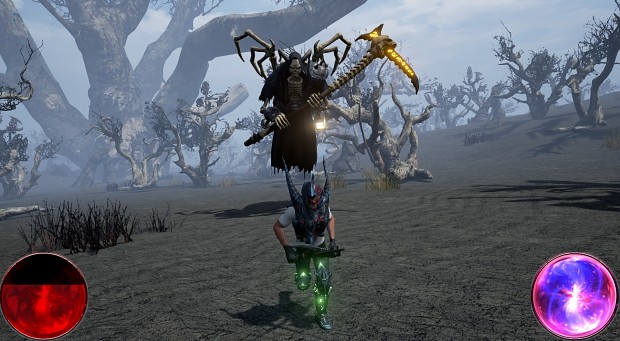 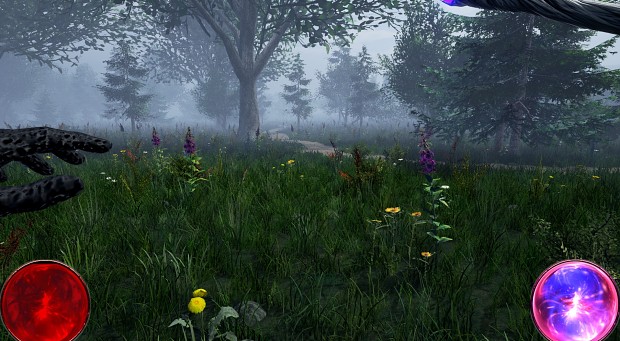 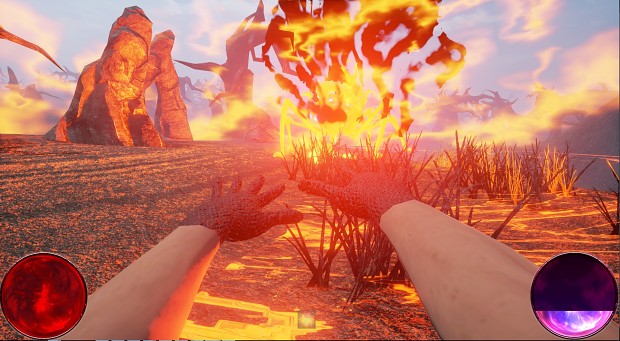 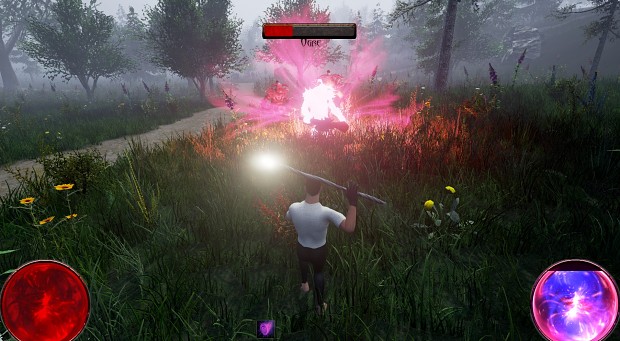 The storyline is dark, you'll see the main character fighting for revenge after seeing his family get killed, but will he give in to evil to fulfill his one desire, or will he not, that will be for you to decide. Not to give spoilers, in short you might have to face baphomet or satan. 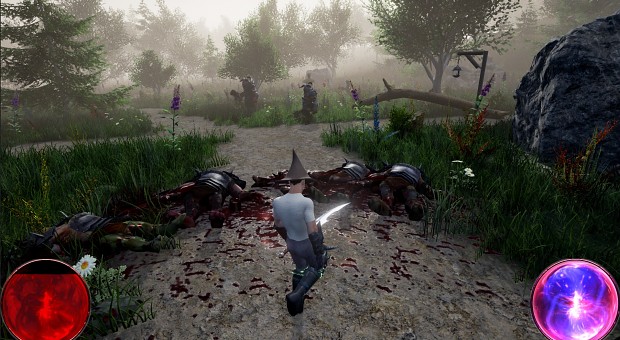 The game also has a lot of symbolism in it to add a bit of mystery, for example if you see the mark that symbolizes satan's birth, just get heck out of there. Satan, Baphomet and some other major devils can kill your character permanently, but they also drop Demonic, Angelic and Legendary items, so until you think you are ready, you should always run from them. Here is what one of our Satanic Mounts look like in the inventory: 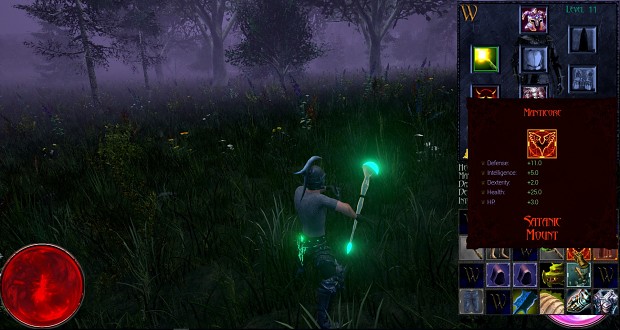 And this is what the satanic mount looks like when you ride it: 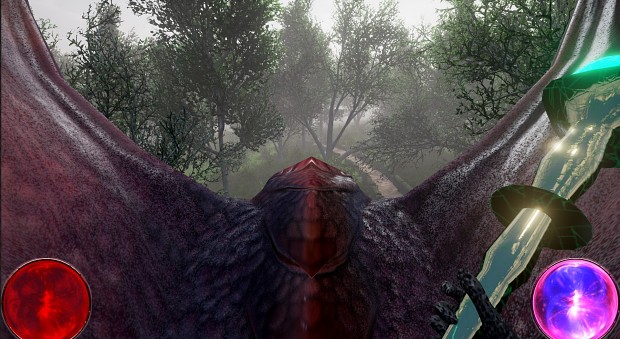 We are close to finishing the system to train and evolve your dragons, after capturing them of course. 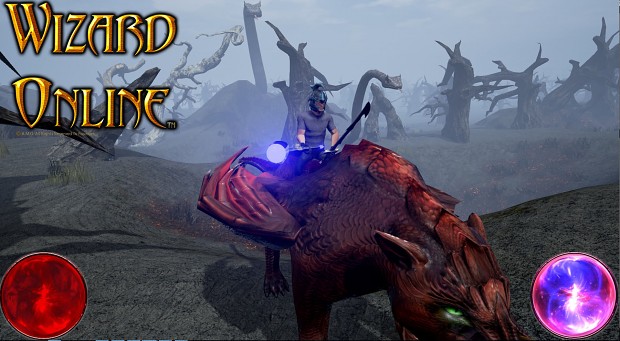 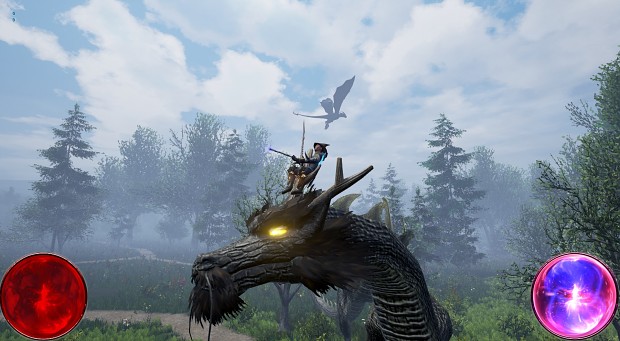 Catch, train and evolve your dragon!

There was the request to use dragon balls to catch the dragons, we liked the idea but it wouldn't fit in with the realistic feel we want to achieve for virtual reality immersion, so we decided to add dragon eggs, feel free to make any suggestions!

There is the virtual-reality and non-virtual reality(normal) mode. We've got the shipping builds(game ready to be shipped) for Windows 32bit and 64bit systems, we want to release PS4 and Xbox one versions in the first quarter of 2016. We've also got a trailer video which should be released somewhere in January 2016. Here is a humble image where we tried to Show both in-game hands, real hands, and the monitor on the same Picture: 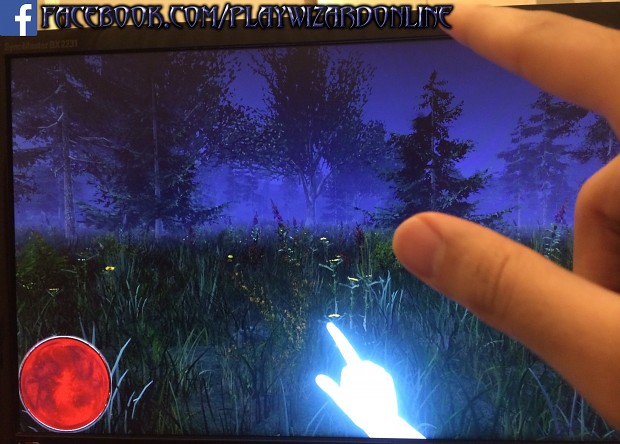 As for additional virtual reality features, you can grab enemies with your hand(in real life), move them around(kind of like wingardium leviosa) and explode them by releasing your grab,(leap motion controller supported for now), other motion controllers will be supported also when they are released, supported VR devices are Oculus Rift, Steam VR(HTC Vive). 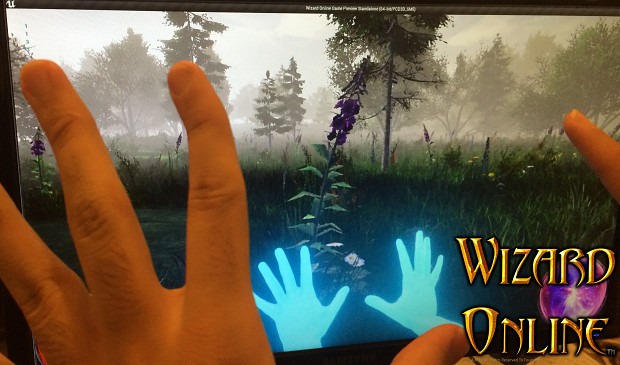 Combat is gandalf style, staff in one hand and sword on the other.You can fly on broomsticks, ride dragons to fly and mount most of the 4 legged enemies to move faster. Loot system will be like Diablo 3:ROS loot system, with the addition of upgrading items. 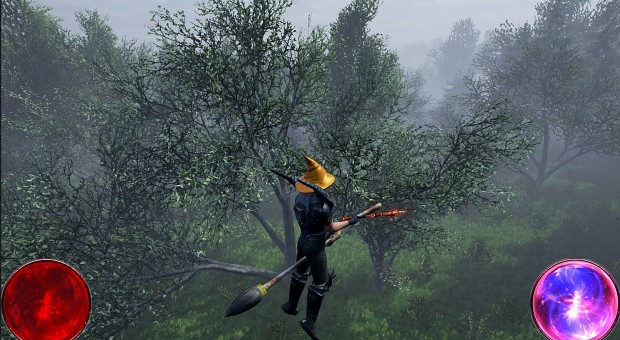 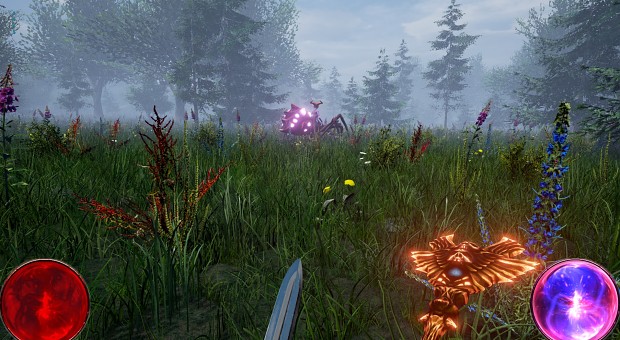 Sword and wand, you can attack enemies while running away, and when you're out of mana, you can teleport to them and start melee combat to fill up your mana, be careful though, Wizard Online doesn't have a hardcore mode where your character gets deleted when you die, but the most evil creatures(there aren't many) can in fact delete your character when they kill you. We did this to keep the game engaging, when nowhere is safe, you will want to become stronger, and that's what drives the player. 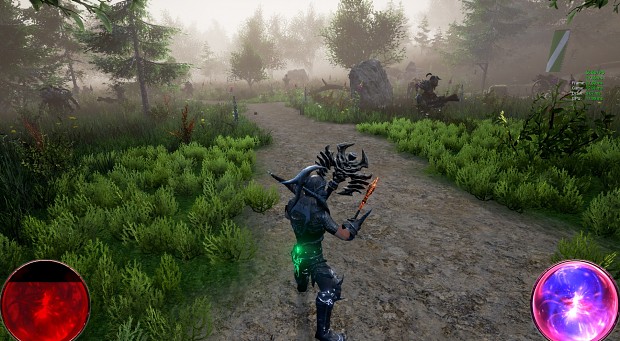 Supported Technologies for now(More will be added) 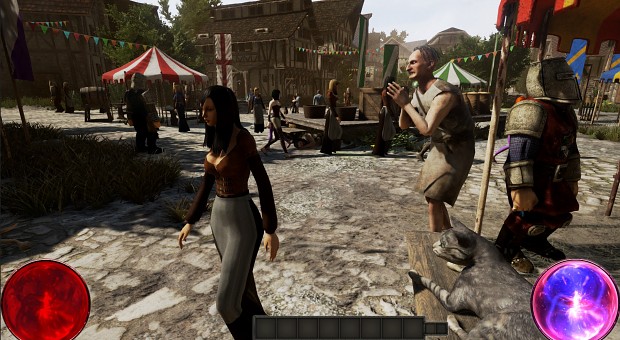 DirectX12 for Windows10 users(You gain around 10 to 20 fps while playing the game, DirectX12 is the new technology for Win10 users, put in simple terms, governs your graphics card better to gain performance. Final Fantasy remake and Wizard Online are the known DX12 games for 2016.) 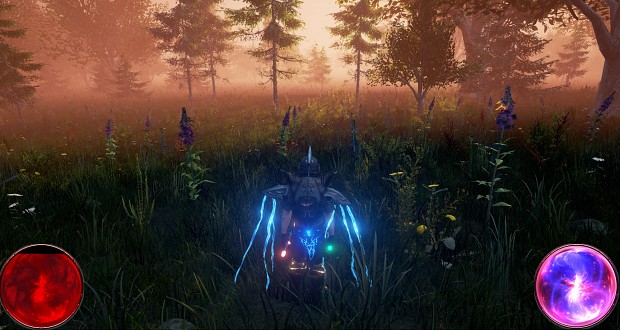 Please like and share our posts on facebook, check us out on indiedb, so we can play this as soon as possible, because we can't release the game until people know about it. www.facebook.com/playwizardonline 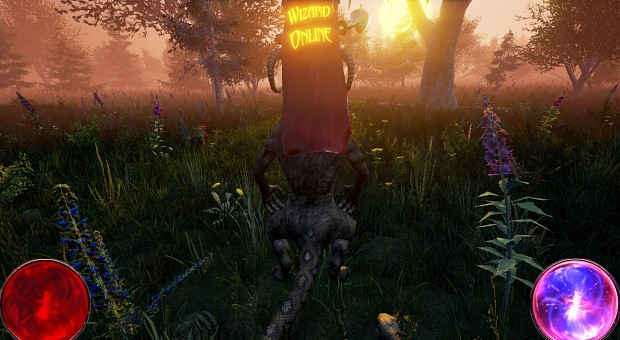 So, do you guys have any In-game video footage or something?

We made a trailer video about 2 months ago, it's to be released in 10 days