An overview of design-lessons learned from developing a puzzle game aimed specifically at mobile devices. 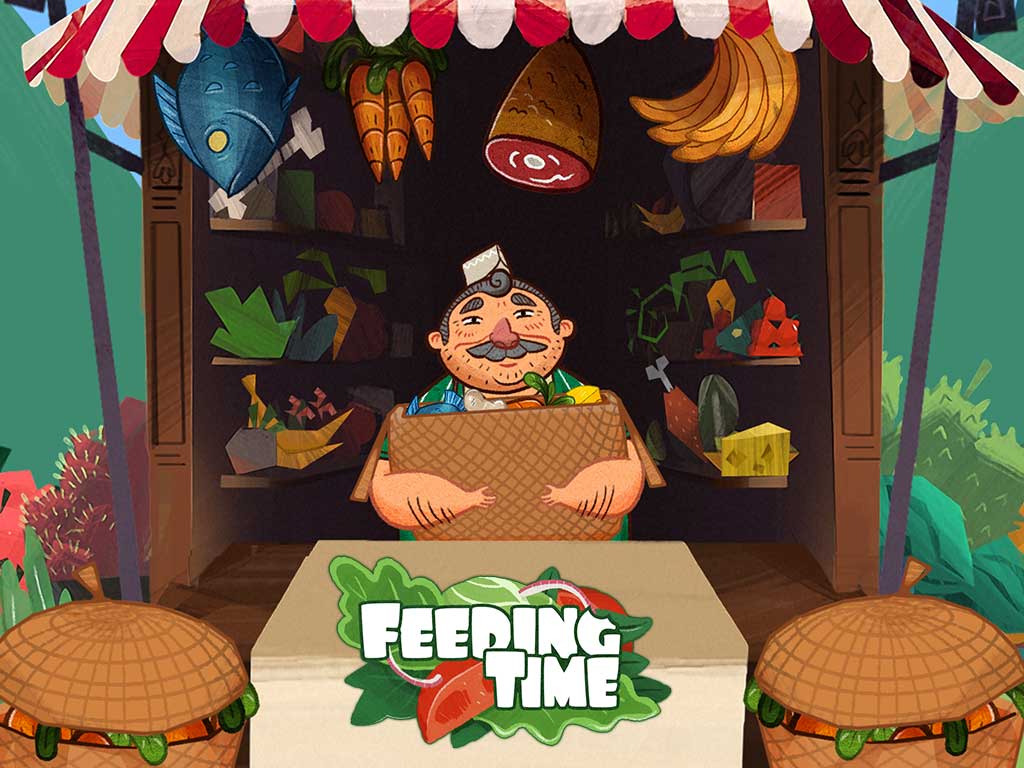 Feeding Time is our studio's upcoming iOS puzzle game that tasks the player with matching adorable animals with their favourite types of food. The game is aimed specifically at touch-screen devices and filled with as much charm and whimsy as we could stuff into it. It's also slated for an early 2014 release, and we'd like to share some of the design lessons learned during its development.

Feeding Time started off as a small project geared toward exploring the mobile market. We knew enough to avoid shoehorning in a platformer or shooter with virtual sticks, but our early prototypes that used any sort of avatar didn't fare well either. Sure, there were some neat ways of controlling a player character on a touch screen (e.g., the mechanic of pulling back the slingshot in Angry Birds), but none of them felt particularly satisfying in a real-time game. The player's hand would always get in the way, and that led to inconveniences at best and frustration at worst. 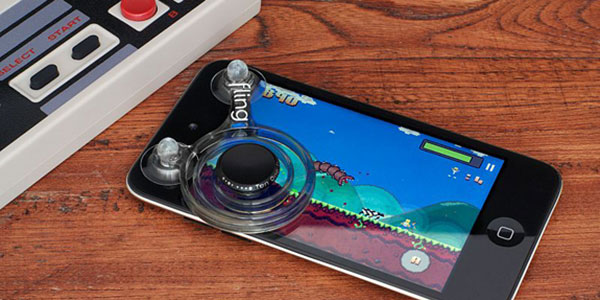 We definitely did not want to make this look like our optimal play experience.

Going back to the drawing board, we decided to try a different approach. One of the advantages of dealing with a touch screen is that various areas of it can be tapped at any time. This makes it perfect for interacting with a game-board, so we chose to prototype a simple grid-based puzzle game. The idea of matching animals with their commonly associated snacks seemed like a good starting point, and we experimented with a few mechanics that followed this motif without deteriorating into a simple match-3 game.

In the end we chose to have the animals surround the foods on the edges of the board. This limited the issue of the player's hands getting in the way while providing a unique challenge: maneuvering the board in such a way that the foods clustered next to their corresponding animal. 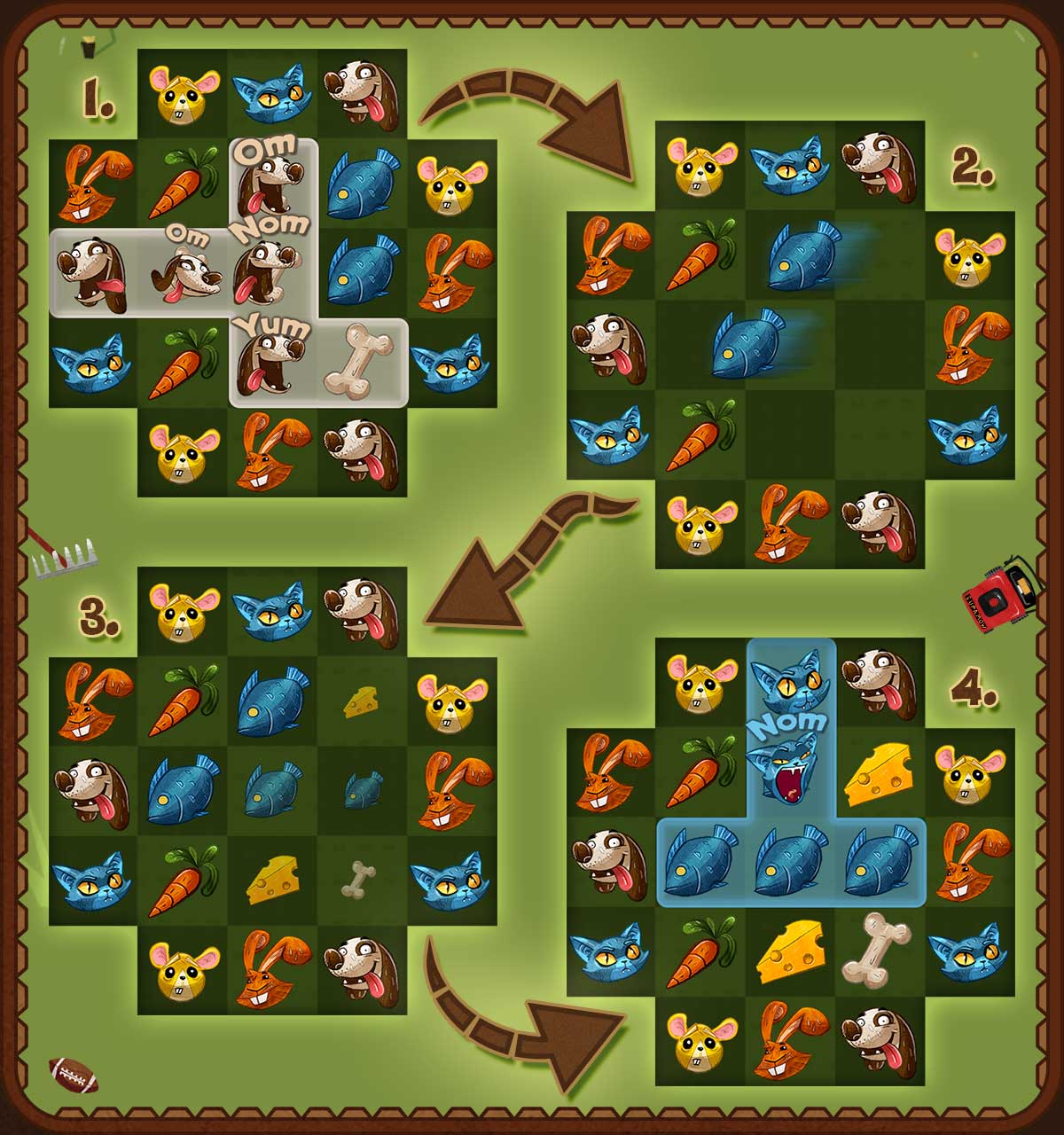 A storyboard of the prototype's gameplay.

We played around with the size of the board as well, but eventually settled on a 10x10 grid. This allowed us to make the smallest foods and animals 32x32 pixels, which nicely accommodated the power-of-two rule when scaling to different screen sizes.

Finally, we added some tap-to-activate powerups as a reward for making large matches. These not only introduced new dynamics to the gameplay, e.g., letting player save a food-mutating powerup for just the right time, but also alleviated the problem of the game board getting too scrambled over time.

While we had a fun prototype, it wasn't quite crafted for a typical hand-held experience. The first aspect we decided to address was the game length. While session times have been on the rise, the average duration of play for a mobile game is still fairly low. Being fans of the "Blitz" model -- 60 second time limit per stage popularized by Bejeweled Blitz -- we added a time-limit and high score leaderboards to Feeding Time. The latter also nicely fit into the competitive/social aspect of the game.

The experiment worked out quite well except for one glaring issue: large matches took a rather long time to play out. 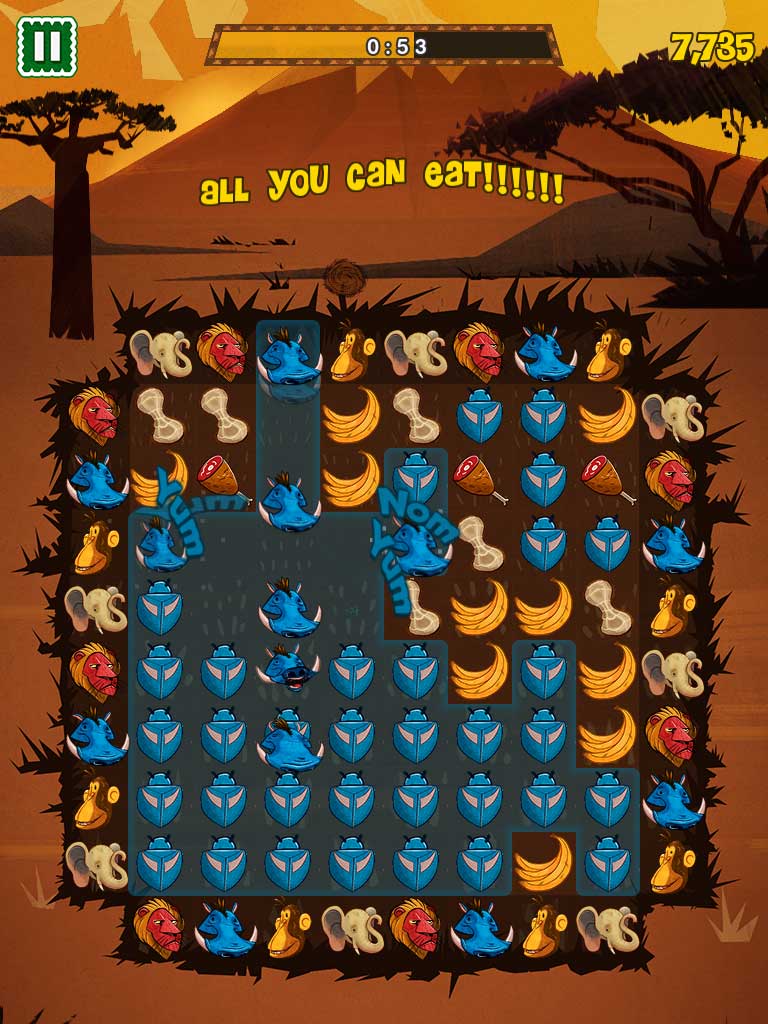 Watching animal-food matches execute was fairly satisfying, but took too much time.

Since large matches were the main goal of the gameplay, their prolonged execution clashed with the level timer. However, not wanting to give up on the blitz concept we messed around with the speeds of the animals, the duration of the timer, the pace at which the foods slid around, etc. While these tweaks helped, they didn't solve the fundamental problem of passively waiting for a match to finish while the timer ticked down.

Our breakthrough finally came when we decided to make the game board respond to events in real-time instead of a lock-step fashion. By allowing the player to start new matches while old ones were still executing, we largely removed downtime in the gameplay. Granted a "live" board can be quite tricky to implement, and we had to deal with a variety of difficult bugs it introduced, but the end result was a much more fun and dynamic experience. 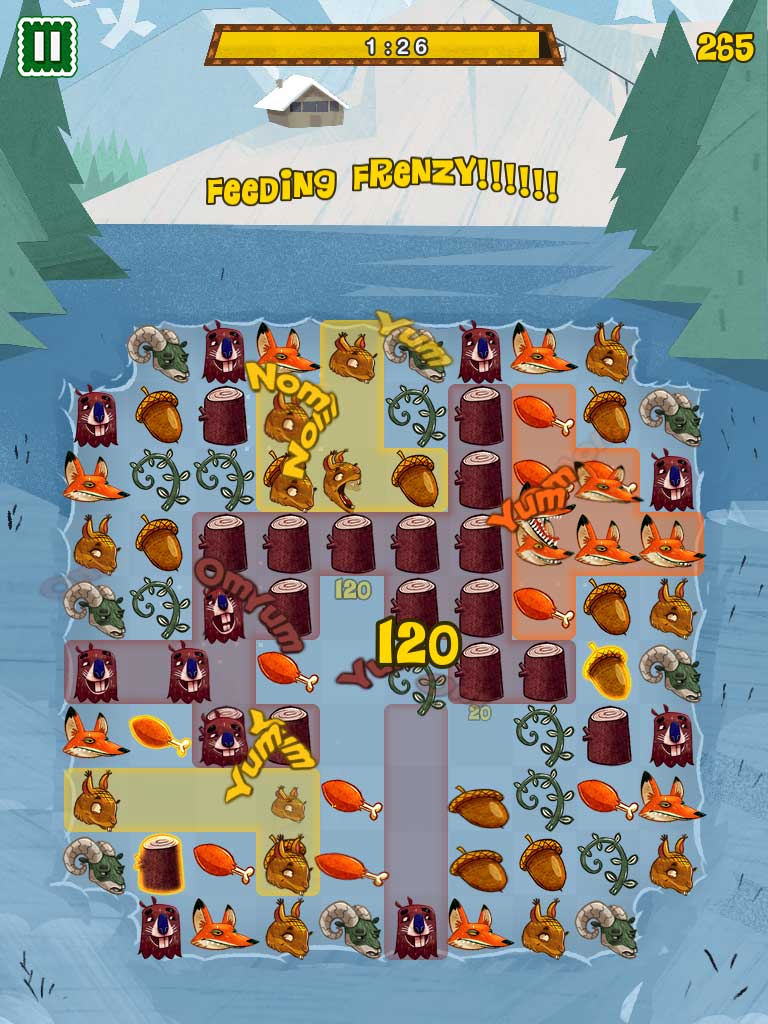 Another element popularized by mobile games such as Jetpack Joyride is the idea of mini-goals. These provide a list of specific achievements for the player to complete that add gameplay variety and providing a secondary source of accomplishment, e.g., you didn't get the high score on the last level, but you finally got through it without getting hit.

What we didn't expect is how suitable these goals would be to serving as the game's tutorials! Instead of implementing a plethora of gated, hand-hold-y segments every time a new powerup or gameplay element was introduced, we simply made it into a goal. During playtesting this proved to work much better at getting players to retain skills and knowledge than simply forcing them through a tutorial. 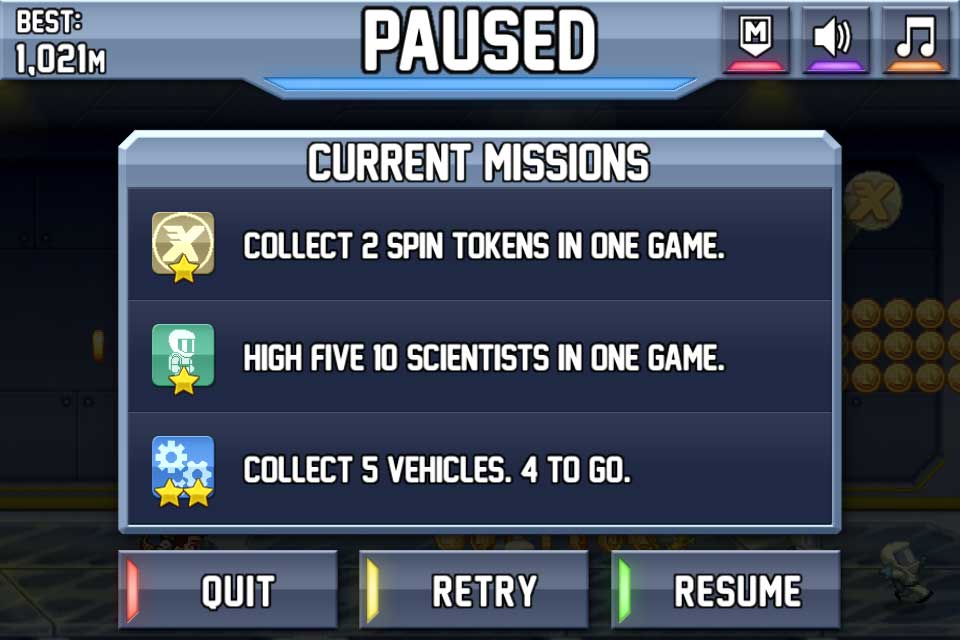 While Tiny Wings included plenty of interesting achievements, Jetpack Joyride took things a step further by presenting mini-goals before and after every level, and on the pause screen.

Finally -- and despite the short sessions times -- we wanted Feeding Time to have a tangible sense of progression. To achieve this, we added an RPG like leveling system with a slight twist: the player's actual score, goal bonuses, etc., would serve as the experience points. This meant that skilled players would potentially advance a little bit faster, but this proved to have a minimal impact. Instead, we got a series of meta-goals that helped to create a feeling that new animals, locations, powerups, etc., were just around the corner.

There were other business, marketing, and gameplay conventions we considered as well, but all of them felt like they encroached on the game's core mechanics so they never quite left the drawing board.

With the base game more or less complete, our team decided to add a variety of features: special minigames played after completing three goals, unique powerups for each area, equipable badges that provide various gameplay modifications, and countless aesthetic flourishes. 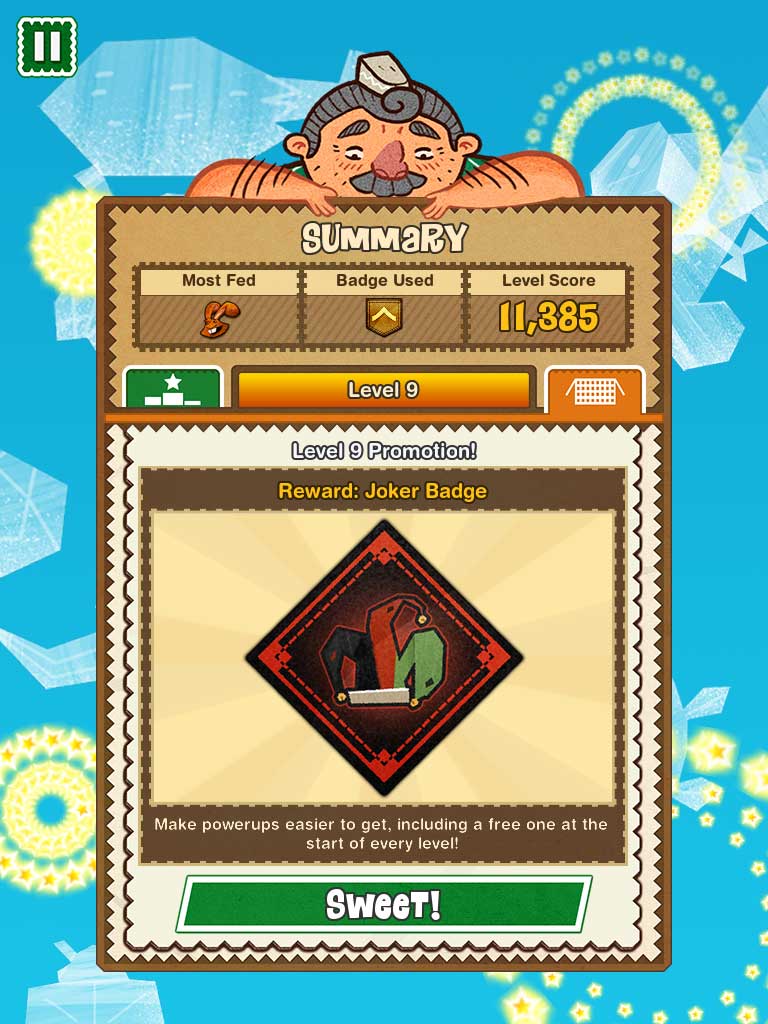 The badges took a long while to properly balance, but they proved to be the most desirable item in the game.

Predictably all these efforts added a significant amount of work to the project, but they made for a much more refined experience. Many mobile games feel rushed and rough around the edges, and that's something we wanted to avoid with our first original IP release. Hopefully you guys will agree it was worth when Feeding Time is released early next year!