First of all a short announcement: Version 233 is now available for download.

In 1916 the French army recognised the need to start replacing its outdated (and arguably not so successful) Lebel 1886 rifle. They chose to go with a semi-automatic design, having tried and tested semi-automatic rifles ( for example the Meunier, albeit with some resistance) before the war broke out. The rifle was produced in fairly large numbers, with the production estimate being around 85k by the wars end. It had a 5 round enbloc magazine, and was gas operated, the mechanism is believed to have heavily influenced the design of the famous M1 Garand. 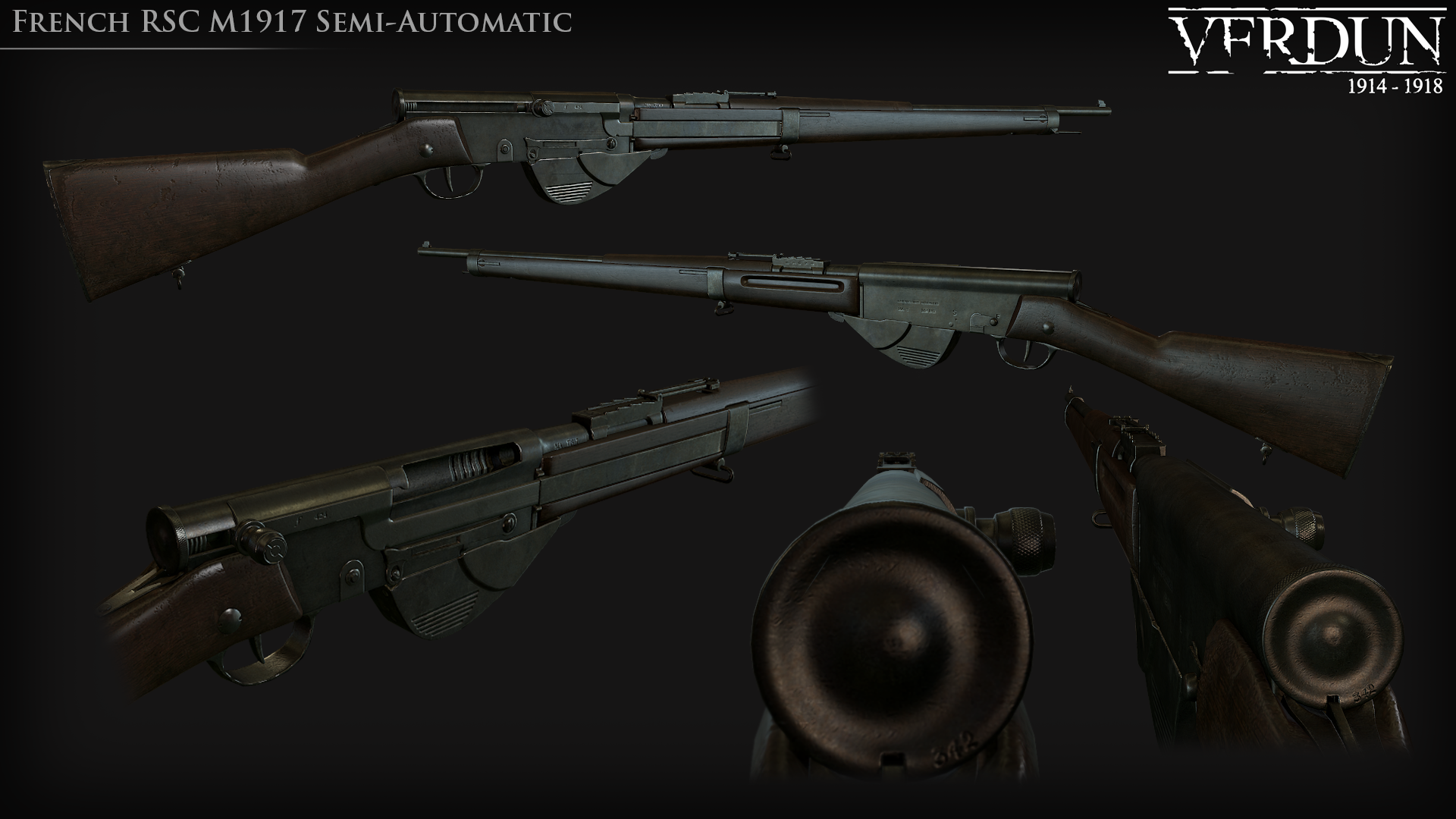 The RSC 17 will offer the french forces some extra firepower vs the overwhelmingly common bolt action rifles, and will be an option for tier 3 Machine Gunners (in place of the chauchat)

A shorter more compact version of the RSC 17, the RSC 18 started production during the very last weeks of the war. The rifle was absolutely renowned for it’s accuracy and loved by it’s users. Only a small number were made ( around 4000) with most of those being produced after the war. 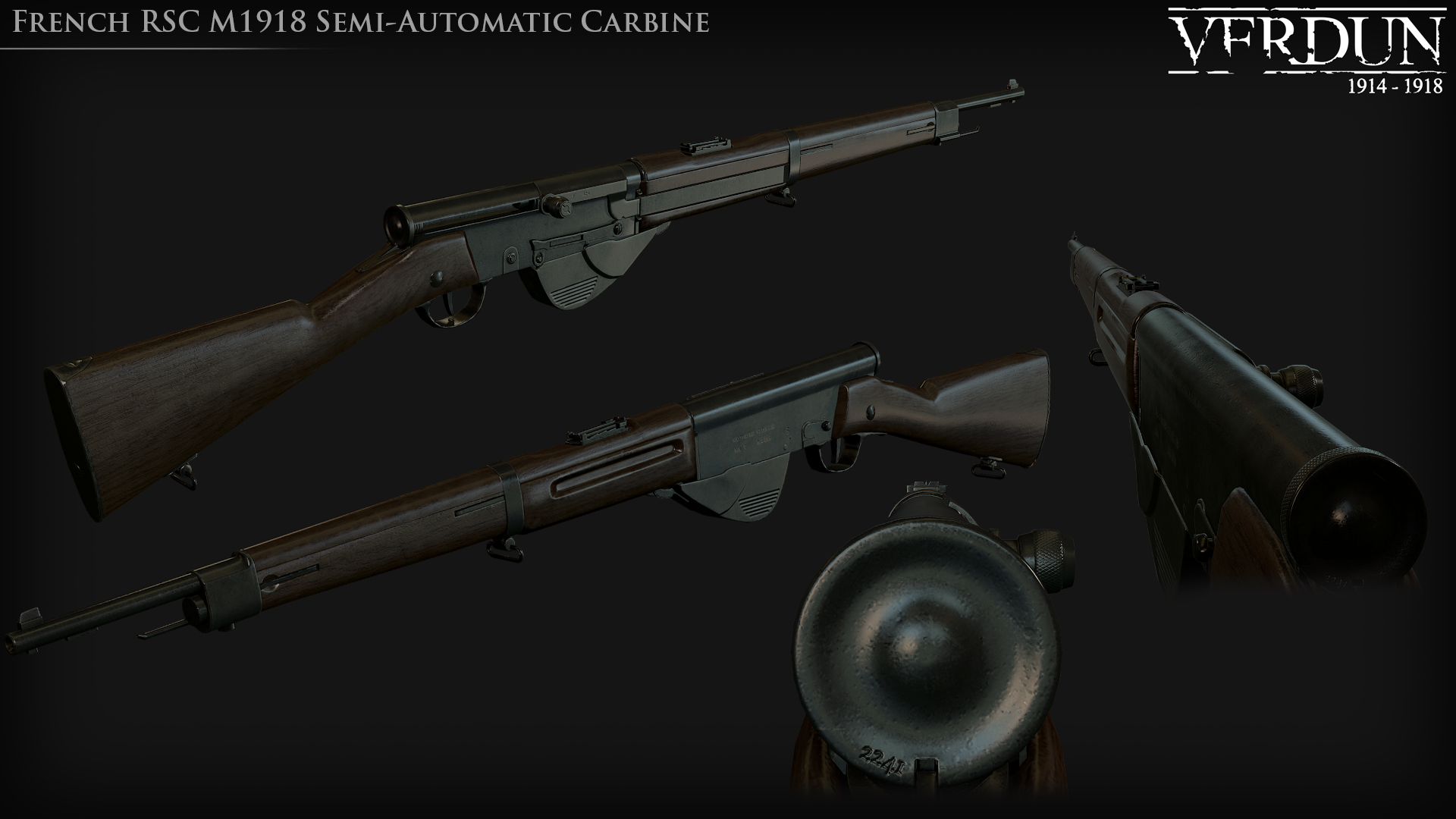 The rifle will see exclusivity in the Attrition game-mode. It is unsure if it saw action but we figured as it was a quick piece to create, this little beauty was too good not to include.

The Hotchkiss M1909 was one of the machineguns adopted by the U.S in the rearmament of it’s military in 1890-1910. Developed by the French Hotchkiss manufacturer (founded by U.S weapon designer Benjamin Hotchkiss) the Hotchkiss was sold under contract to many nations including the U.K (cavalry/tank use), France, U.S.A, and to a lesser extent, Belgium, Spain, Brazil and Australia. With a 30 round clip magazine, the weapon was quite susceptible to mud and dirt and wasn’t ideal for trench warfare. While only around 700 were produced, the U.S had a comparatively small army in 1909, the same year the 30-06 hand crank gatling gun was taken out of service. 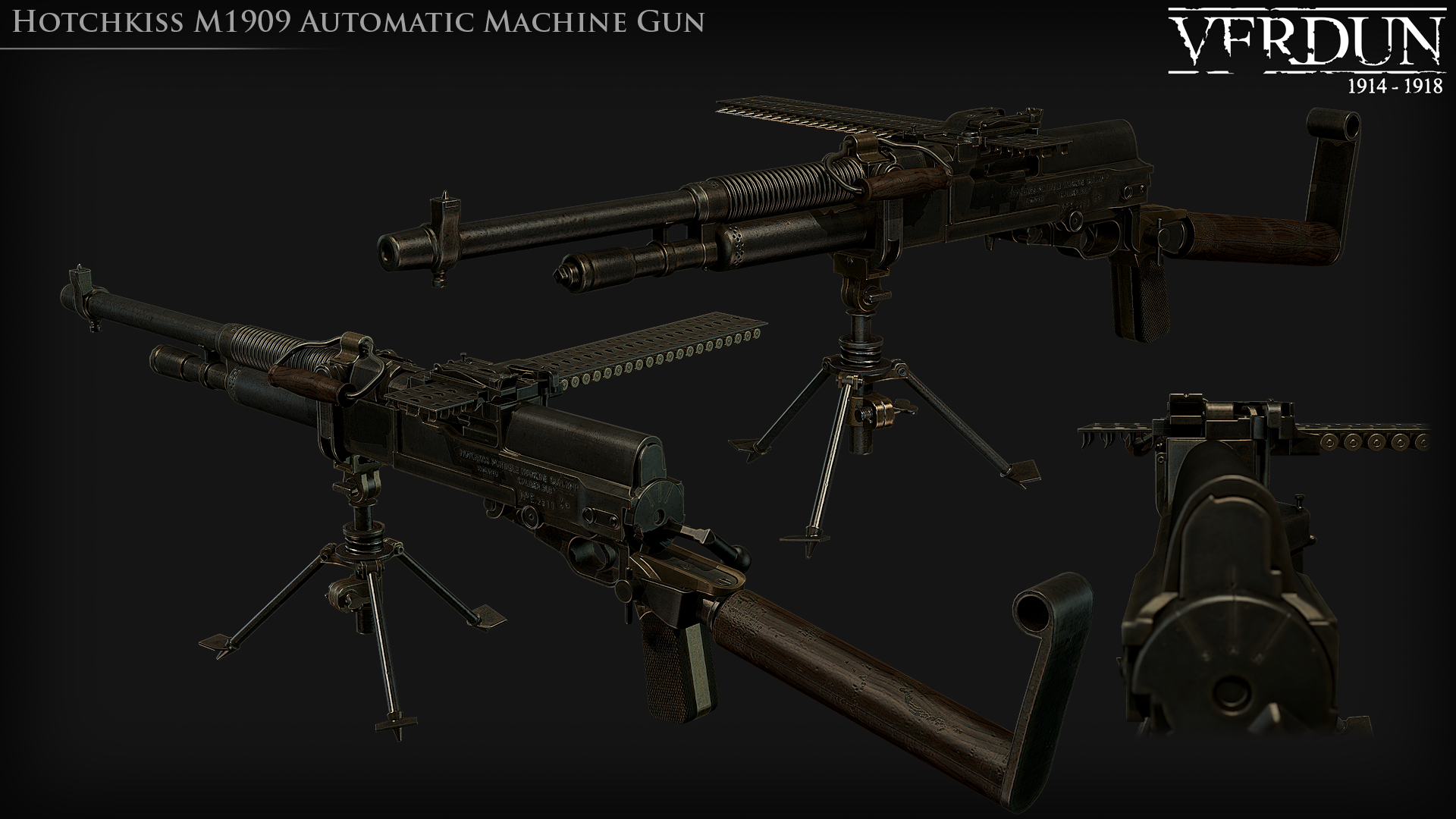 The Hotchkiss in game will be used by the. Boasting a high rate of fire, but a tricky reload and small magazine, the MG should feel more than at home in the trenches.

On the development front, again we’ve made some great progress in all areas. As seen read above; weapons are still being made and animated (several were completed this week). We are more or less at the end of our list with new weapon being added to the game and animated ( of course, we haven’t shown all these yet! - this is by no means the last Weapon Wednesday!)

Early Work In Progress of the in-game RSC Mle. 1917 animation

The Gore system is also more or less ready to go live, several animations have been completed and polished in the last week and the dismemberment and blood systems have been finalized. In addition we will have recorded additional voice acting for the horrific scenes that will unfold in the game.

On the performance front we just received reinforcements! Industry veteran and isotix lead programmer Nico will be joining us. Having worked with unity extensively in the past few years we can double our efforts in areas like bug squashing and improving performance in the weeks to come.

Aside from promising work with Douaumont in the testing branch, we keep advancing on other fronts as well. The animation crew has been allocated to deal with both the massive amount of new weapons (progressing nicely!) but also with enhancing the immersion of the game - in the addition of death animations. We are planning to launch the gore system alongside fort Douaumont within the fortnight.

Here is a small teaser of one of the ‘slower’ death animations. We are adding many more features this very moment, including dismemberment, screaming and flailing, neck shots and more.

With regards to weapons, we have completed several animations this week. Two recently announced weapons: The Mle. 1892 revolver (which model was teased earlier). What was particularly tricky to create was the fact that, unlike most other revolvers from the time, player has to switch hands in order to reload:

Also spectacular and most fun to use ingame is the M1897 trench gun. This classic firearm can be found in many games and when we implemented it in Verdun it feels like a familiar powerful weapon. The Soon to be formed U.S marine squad will have a blast!

Excellent reports come in from the 5.3 update tests of last monday. Both Douaumont and other maps seem to run smoothly. We’d like to encourage all active ( and well-behaved!) community members to join our beta testing team. here

We are on track with deploying the next build to the main branch. We have received positive feedback on the beta branch, solved most of the bugs and will be rolling out a new game version right now. Tomorrow a new version with gore will be available on the beta branch for our closed beta testers. If all goes well, this should set us in motion to get Douaumont and the gore live and released as soon as possible, but for now do please bear with us! 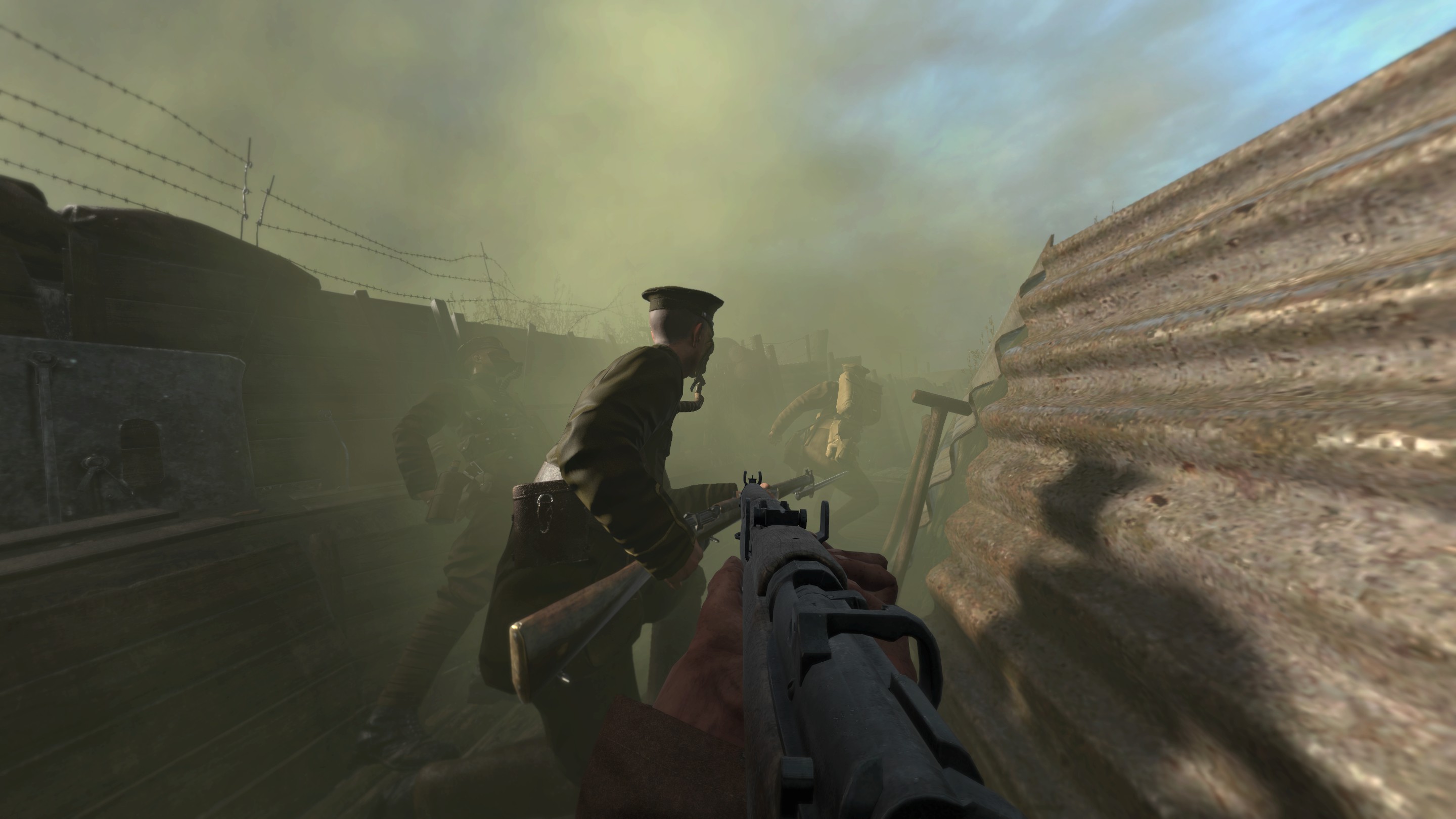 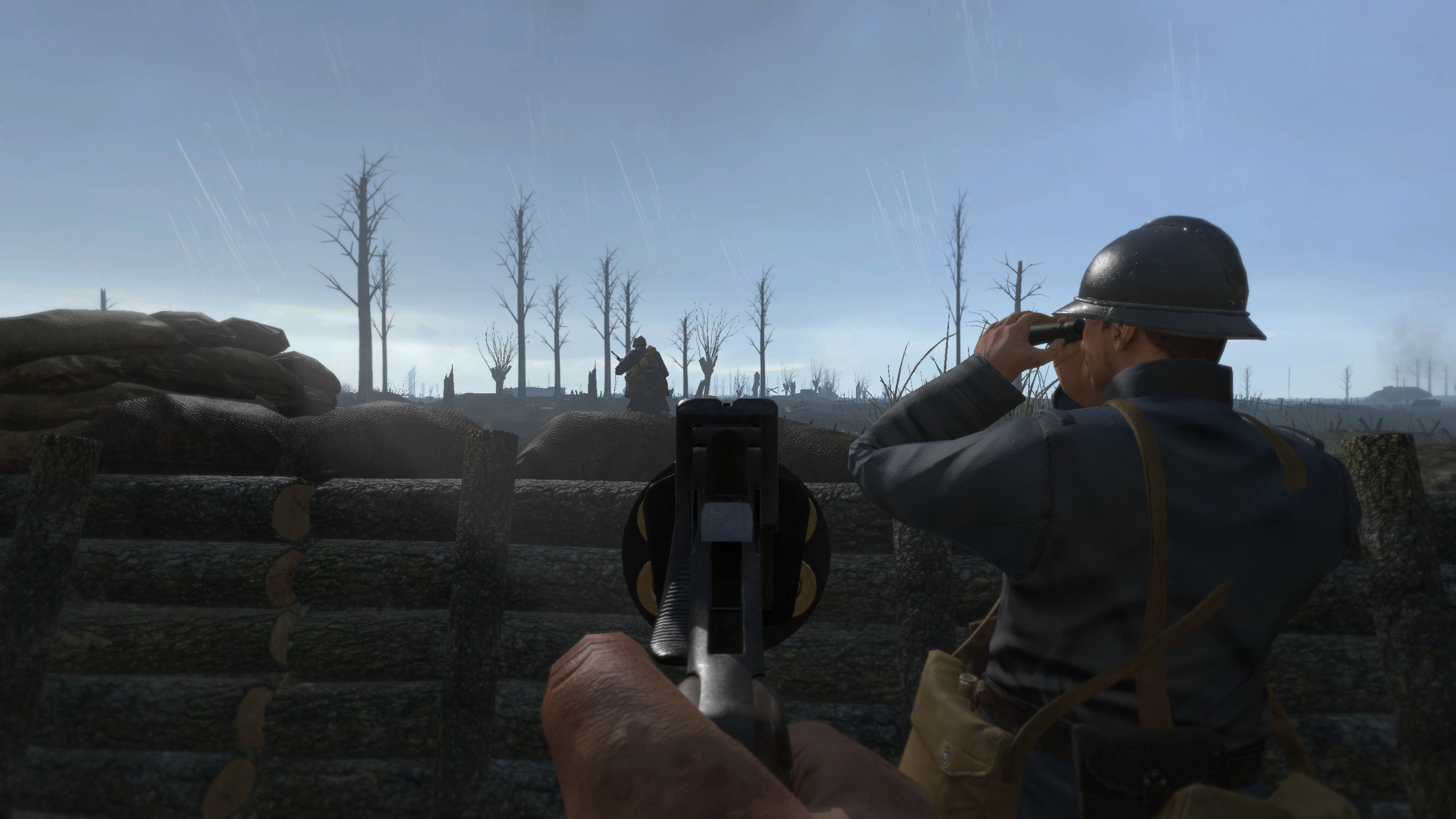 That will be all for this week. Tune in next week for more where we’ll be unveiling some much sought after firepower.

These screenshots are fantastic.

yesterday I watched a video on Forgotten Weapons about the RSC 1917 and 1918. Pretty cool to see it there and now here. Can't wait to use that high-tech French weapon in game!

Forgotten weapons is amazing! Glad to also see them in here!