Welcome back to the second of Verdun’s weekly “Weapon Wednesday”, where we tease upcoming content and update you on the overall state of the game development!

This week we showcase a variety of new weapons and some much sought after weapon attachments.

The official standard French sidearm during the Great War. It is commonly referred to as the “lebel” revolver when actually manufactured by St. Etienne. The double-action revolver was well designed for its time and served all the way up until the Second World War. While reliable, it was somewhat let down by it’s small caliber, especially when compared with other service revolvers from the time (i.e Webley MKVI) 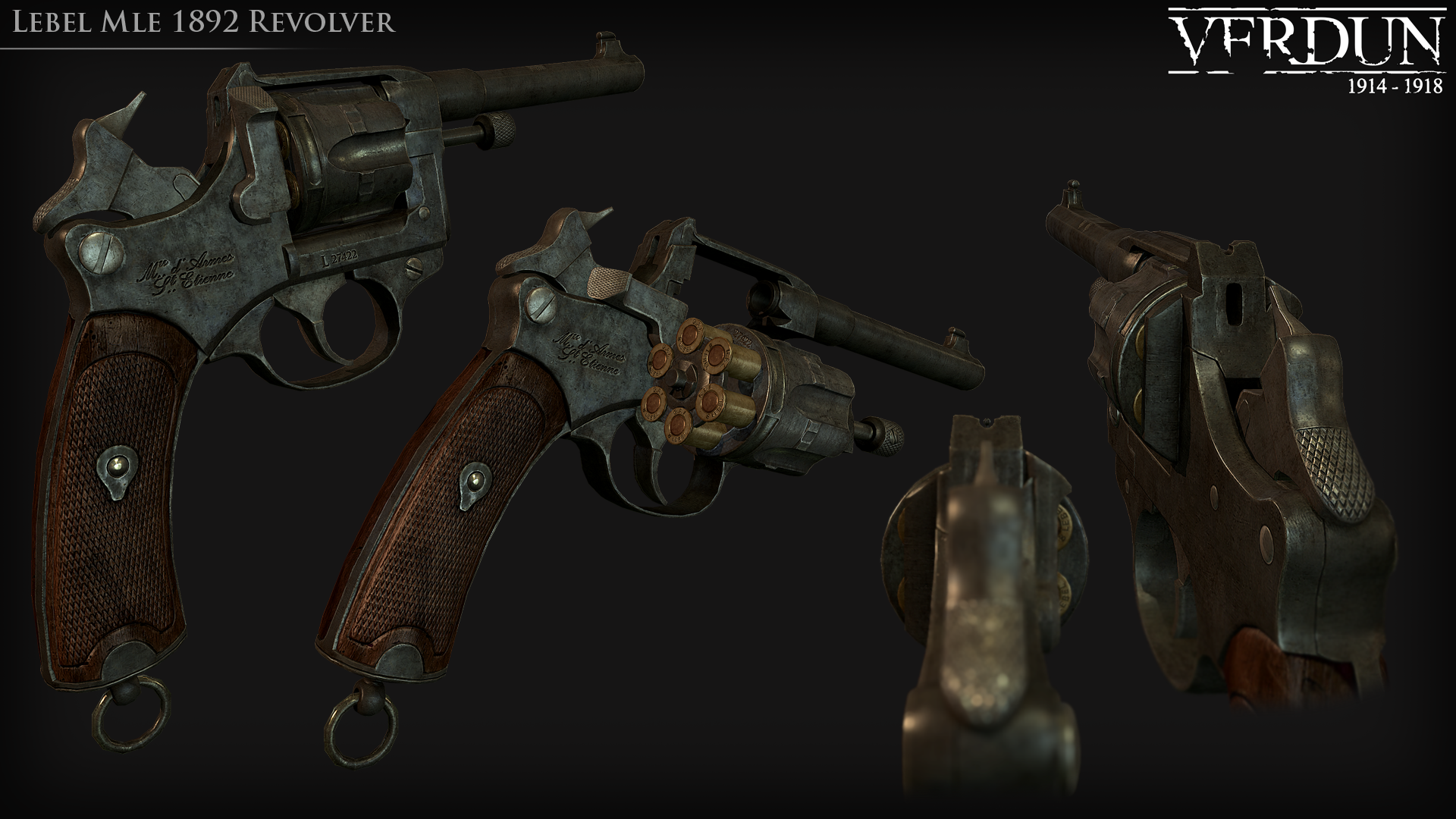 In the game the weapon will be an optional alternative to the Ruby pistol. Since both guns fire a weak cartridge though their main strength lies in the handling speed (e.g. the m1892 features an ejector rod), this is the case with most french weapons in game.

We have revisited the telescopic sights for all nations, this has been something on our to do list for a while. On the left, the French APX 1917 was produced by the puteaux workshop and were designed for the lebel and berthier rifles. It features a full vertical and horizontal linear crosshair. The scope saw action frequently on the western front, and was in use right the way into the Second World War. On the right, one of many German scopes uses on the war, produced by Gortz, and modified for the Gewehr 98. This scope features the iconic german vertical arrow and horizontal strip crosshair. Both the French and German scopes have a magnification of x3 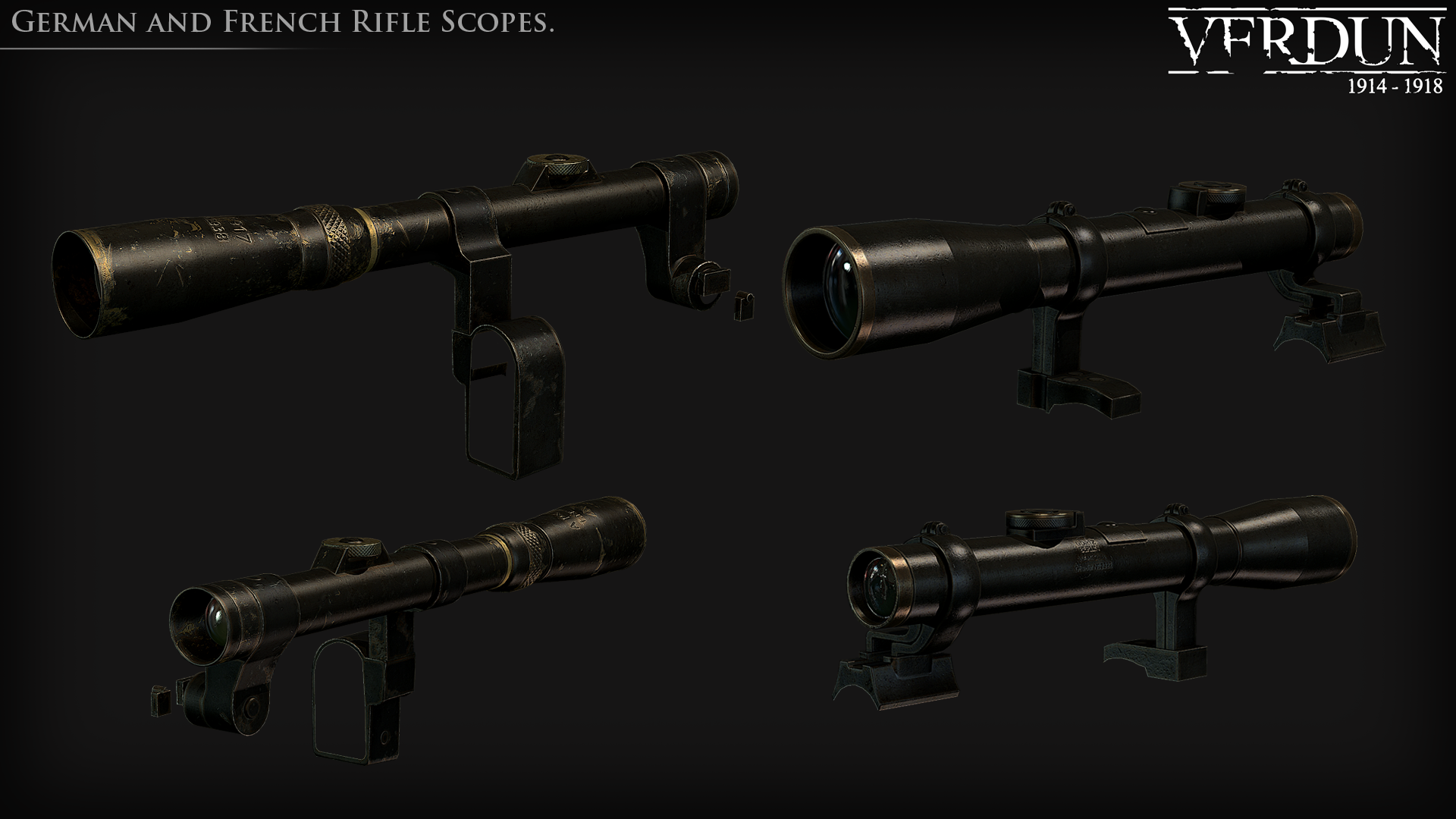 The British Aldis scope, produced by the Aldis brothers of Birmingham England was a common choice for British sharp shooters during the war. Combined with a J Purdey & Son mounting, the scope was offset and allowed for use of iron sights (as did a great many of ww1 rifle scopes) The U.S M1913 Musket sight was a common rifle/machine gun scope used by the U.S. Army throughout the Great War. Differing ever so slightly to the m1908 Musket Sight, it was more compact than the Winchester A5 and B5 scopes that were used with the Springfield 1903. Iconic in design and purpose, this piece was used throughout the war by both U.S and Canadian service men. Both scopes will have crosshairs that accurately reflect the time period. 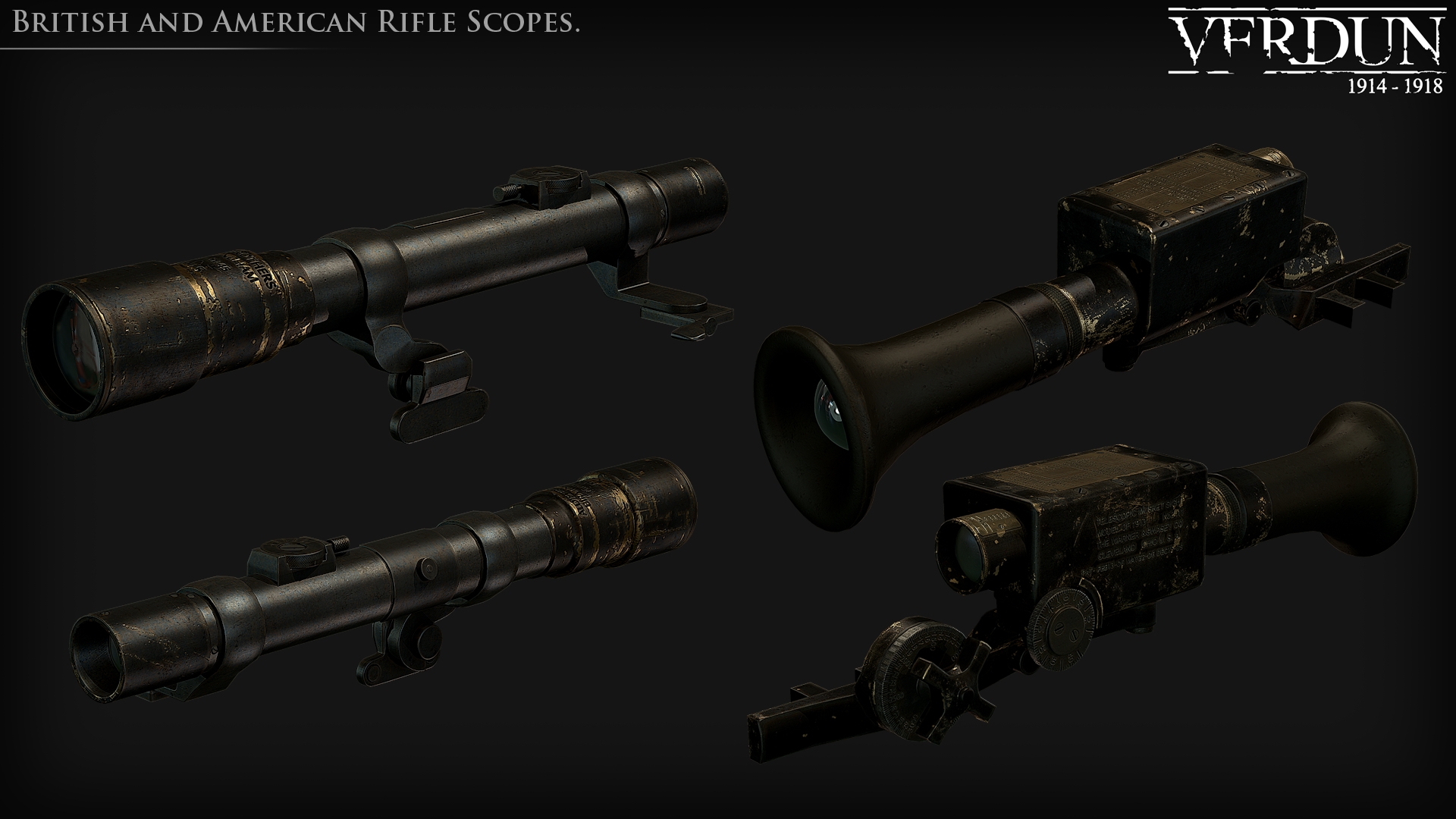 The new scopes have seen a significant graphical overhaul from the previous version ( the lone APX 1917). In addition to these scopes, we hope to open up the possibility for a new feature long requested by the community: Switching between scope and iron sights (hence the alteration of the German scope mounting). The implementation of this feature will depend heavily on the available time and resources however.

Two ‘Egg’ handgrenades both introduced in 1917. The first one being the German “Eierhandgranate M1917” of the second type, with a fragmenting ring around the the center to enhance its potential to inflict damage within the trenches. It is significantly smaller than the stick grenades and thus more could be carrier and could be thrown further and with decent accuracy. The introduction of the Eierhandgranate triggered the British to introduce the No. 34 Egg grenade later that year. The No. 34 used an internal percussion delay fuse, which meant that after removing the pin was removed the grenade had to be smashed against a hard surface in order to trigger the fuse. 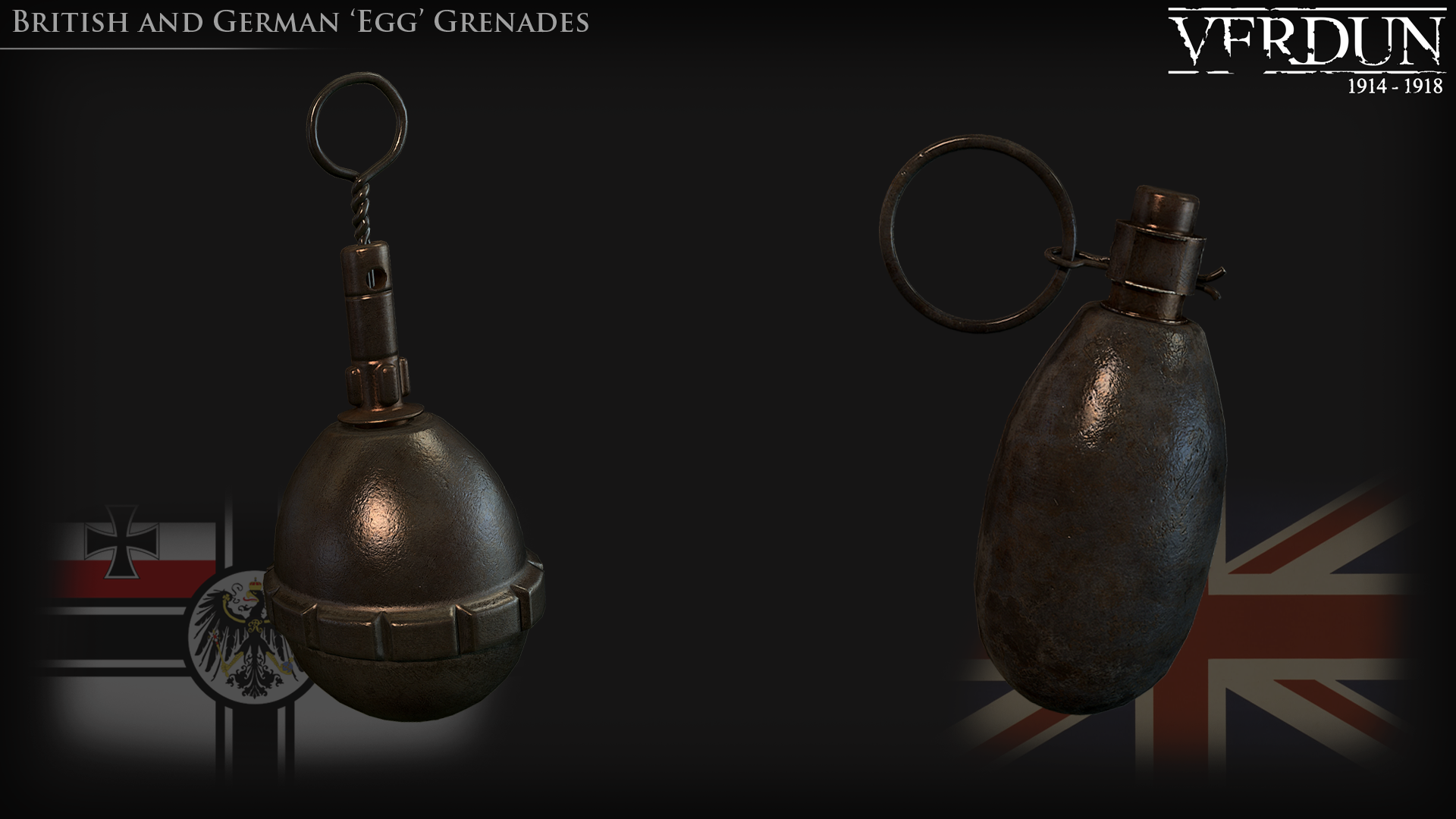 Both these grenades are ideal tools for the assault squads in the game, as their size and weight allows for many of them to be carried in the trenches of the western front. The tradeoff is that the larger grenades (mainly the percussion stick grenades) offer a wider area of effect than these new explosives.

Work has continued on improving performance as planned, especially in the area of CPU code optimizations some ground has been won. In addition a new custom culling system is being added on top of the existing unity system in order to more aggressively attack the smaller objects in the scenes, thus create better performance. The anti-cheat system is also being reworked as some people received bans when they shouldn’t have. The new animation system that is currently being developed will contain accurate animations from switching stance such as standing up, crawling and going into sight mode.

After last week’s hotfix we’re aiming to have the performance update out this week. It will also contain the engine update (to unity 5.2) which should include some native improvements and bug-fixes as well. The team is hard at work putting the last pieces of the new system in place. 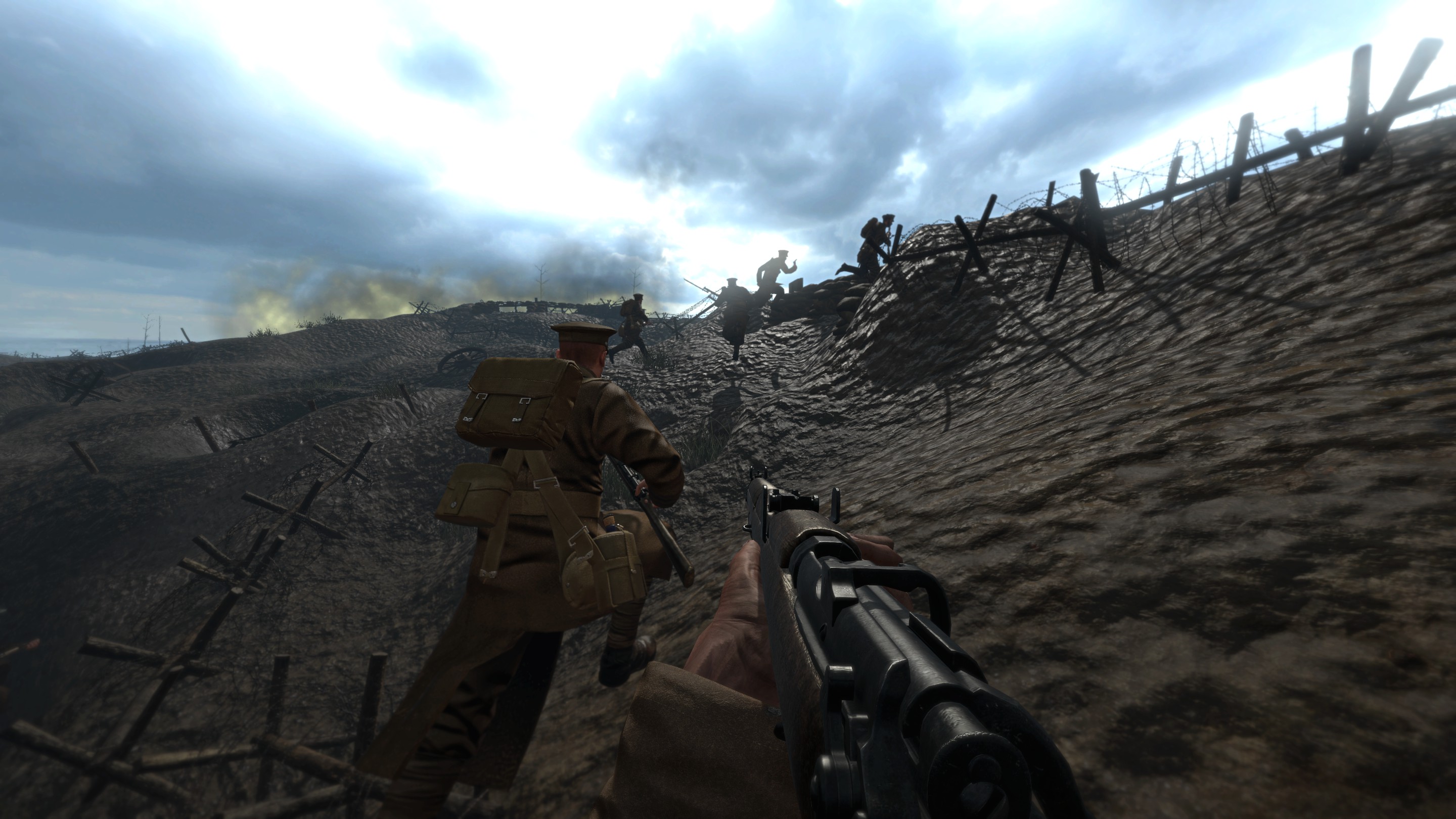 Your screenshot up here? That is possible, submit your screenshots to the HUB and we will pick one. Tip: use F8 to hide the HUD, put graphics on ultra and use a big field of view

That will be all for this week. Do stay tuned for next week’s update - when we will be showcasing an old friend, and introducing some new.

That revolver is beautiful.

Good work, and you guys should consider to release an asset and mapping tool to the community and possible some sort of dedicated server too..

But good news none the less, keep it up.