Wayward Beta 1.5 has been released! Dubbed “Watergate” after the controversy of the inclusion of thirst and water in the last update and a reference to the real-life scandal. Get it? It’s a pun… anyways… water and thirst is a lot easier in 1.5.

How easier? Well, if you read the previously posted "On Thirst & Hydration" post, you can get an idea on what changed and why. 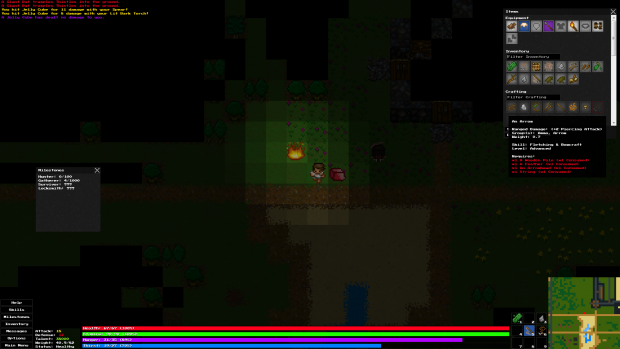 Besides the water and thirst changes, there's lots of other changes, and I mean A LOT! Take a look at the changelog! There's close to 70 changes there. Some of the best stuff is as follows:

Play Online:
Unlok.ca
Do a hard refresh or clear your cache if beta 1.4 is still popping up for you.

ooooh I was wondering about your game recently, I swear I must have smelled that update from here! :D can't wait to give it a shot.

Yeah, I'll be grabbing this when I get into the office. The Milestones sound interesting - based solely off skill progression or a combination of things?

Skill, or specific actions/interactions currently. This will expanded upon next release quite a bit.

Going to try this out today looking forward to it will post hope some post play feedback after a few days of playing :3.

- hobgoblins sometimes drop snares for whatever reason (I remember this was also in 1.4, is this intended?)

- bags/backpack: "an error has occured" while trying to get items out of a bag/backpack - here the quick info didnt display and it wouldn't let me get the items out. (restarting the game fixes this) I found out it happens when you switch frome normal world -cave or vice versa, then try to get the stuff outside of the container.

- if I want to drag stuff into my bag/backpack the window disappears each time an item is placed inside, making its use extremely tedious (looks like window focus screws up here - perhaps that could be fixed by having one single inventory screen that contains both player inventory and container inventory

- muting and unmuting (+window focus switching?) causes two different songs to play at the same time (once the double-played song stops it will stop playing two at the same time, doesn't play another one)

- on some forest areas without river, water ponds are extremely rare (maybe make them more common OR add possibility to extract water from roots/leaves/plants)

- I love discovering tattered maps. They lead me to valueable bark leggings and bark torches while I'm running around in iron stuff :D Perhaps you should tune up looting chances for chests found using those maps... I only had discovered 1 treasure till 90k talent (I found +6-8 chests in caves, and 1 using a map). After that I just recently found 2 other treasures (one using a map and one as monster loot). Is it just me or is that a bit too less, given how much (+6hrs) I actually played for this? I also literally looked everywhere I could and the loot was still scarce.
Using a raft I found only one another accessible island but there don't seem to be any other islands I could sail to. What's annoying is that there is absolutely no desert mountains, so I can't even use some recipes at all. Maybe I just got unlucky in that regard lol.

Question: Does the terrain generator create all possible terrains, as in: is it even worth to look for a desert/sandstone region?

Thanks for the bug reports and suggestions b5cully!

ah, about the loot I have say, it seems like I really just got unlucky: I just made another run and got 3 treasures in the first 1-2 or so hours(using the character I finished off the last game, travelled home here).

there is a bug though that makes the main menu disappear after you get to the "end screen" once you sailed home. This is fixed by restarting the game.
Another bug is when you managed to open a locked chest with a almost broken BONE lockpick (durability 1 or 0) it also gives you an error. Usually, when you open a chest like that another window shows up, but when this error occurs the window won't display.

How can u play on a iphone browser?

When playing on my netbook, the backround is completely black/blank.
I don't have this problem with v1.4.

Is this on the browser version? Which operating system are you on? Thanks!