Sketchy Realms returns with some brand new polished internal engineering to our beloved graphic horror game. We begin our first sequence with a cinematic (hopefully more of these) introduction of all our current characters; Eric, Jill, Malissa and, Pablo. Sketchy Realms focuses a modern gothic style setting into a world full of action, blood and, guns!

Sketchy Realms returns with some brand new polished internal engineering to our beloved graphic horror game! In this article we'll be featuring lots of details and evidence of what is to come in the very near future in the world of Vampire Slayer: New Blood. In a few brief words we'll be finally displaying some actual playthroughs along with animation of our in-game mechanics. Got your attention? Stick around this article and we'll unveil our new secret update!

We begin our first sequence with a cinematic (hopefully more of these) introduction of all our current characters; Eric, Jill, Malissa and, Pablo. Sketchy Realms focuses a modern gothic style setting into a world full of action, blood and, guns!

Malissa the malicious female vampire begins first blood thrashing within the church menacingly towards our unsuspecting slayers. Following Malissa, is Eric the Vampire who prowls outside the church and watch tower. Both of these undead beings possess strong physical powers with swift and agile movements. One strike from these powerful beings means certain death.

Stand alone, each of these vampires inherit unique abilities.

Eric with the power to cloak himself momentarily, can maneuver through the enemy, and lunge at them, in a surprise attack.

As you can see the humans use their ranged weapons to damage the vampires when they're pouncing from wall to wall. However shooting will not be enough to take down a vampire. In order to completely destroy the vampire, the humans will have only 3 seconds to stake the vampire through the heart when he is down. Vampire Slayers will also be supplied with special abilities that will be announced soon.

Because Sketchy Realms is a one man operation, the humans are only set (for now) with just primary weapons and the stake as a means for defense and takedown.

Jill, our human Mac10 combatant allows her to spray and pray through a series of vampires if ever the opportunity arises. Individually she will struggle facing the vampire head on.

Pablo, our newest slayer, is unique for his primary weapon, the Boomstick! At this moment the shotgun and all other weapon mechanics are still facing fixes and improvements that still are being in progress. In the future we'll boosting the power and recoil each weapon has to offer. For now Pablos shotgun and Jill's mac 10 create a powerful team based duo.

We've made major improvements since our last teaser video. For instance Jill's reload animation has been changed dramatically. Her magazine clip now drops during reload animations and gets re-attached during combat. During death, the ragdoll effect has been adjusted to look more realistic during takedowns. That mean no more crazy floppy elongated giraffe necks when mauled by vampires or vice versa.

Sketchy Realms is literally picking up pace, and would like to thank all our supporters who have donated to our kickstarter. We'll be beginning our first trials in live beta testing very soon! Our marketing team is also rallying more players to try out our alpha coming soon to Steam. We've made our discord live and ready for beta test meets. 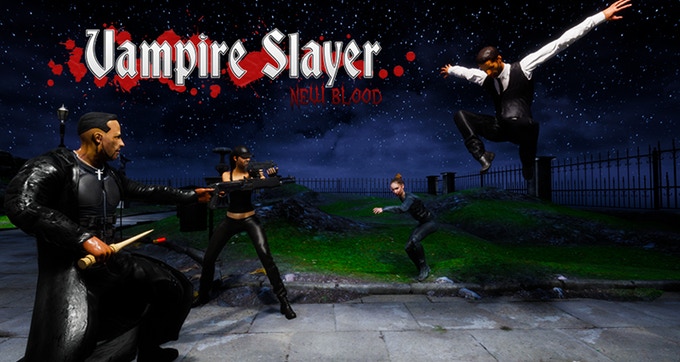