Let's talk a bit about how does the gas mask system work in Sewer Tea. Also some enemies' pictures.

Those who checked the image section here on IndieDB probably are wondering what is that HUD element with a mask on it. 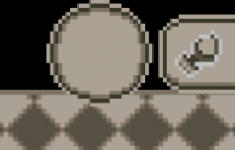 As previously mentioned, in Sewer Tea there's the constant threat of being attacked with the gas itself. Some mutations can even produce it as a defense mechanism. These enemies or these zones infested with gas will be randomly placed in the level itself, along with the rest of procedurally generated items. That's why it'll come in handy to have your gas mask meter full. The maximum allowed right now is set to 60 seconds and each gas mask you find during your playthrough will give you 10 seconds worth of gas mask usage.

If you stay in the gas for 5 seconds without wearing the gas mask, you'll die. Most gas zones can be crossed without getting you killed, but they will severely harm the player. In Sewer Tea, health is pretty important and you will want to avoid those situations in which you have no life at all (for example, facing bosses). Maybe instead of crossing a path which is filled with gas, it'd be a wiser idea to look for a different path, but maybe that different path is guarded by a much bigger enemy which you can't face with your current weapon level. Decisions! 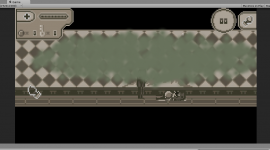 Right now, when you press G you will put on the mask. The countdown will begin and once it reaches zero, the player will automatically take off the mask, leaving you unprotected against the sewer tea gas.
As per the enemies that can produce Sewer Tea, so far I have two. The gaschine and the sewer fly.The gaschine is the mutation of a chicken affected by the Sewer Tea. It has grown longer legs and lost all the feathers, resulting in some sort of big chunk of flesh held by two skinny gooey legs. Some times flies feed on some of the "chicken" flesh and that's why when killing gaschines, there's a chance it will excrete two sewer flies on death. The sewer fly is just a fly that harms the player on contact and spreads Sewer Tea as it flies around.

I will post some animations with them later on! As for now, please take a look at some of the other enemies (only the last three + the screamer are implemented so far).

I like the fact that the game introduces survival mechanics! Keep it that way, it will make it much more interesting :3

P.S.: Those enemies look unsettling, especially the fourth one o_o

Sewer Tea won't be too much focused on survival mechanics. So far it's planned the gas mask thingy + some food eating mechanics.

That one lays eggs near corpses. They hatch and spawn another enemy.