We briefly explore the simplification of TRI and its development process, which lead to a better game. Especially level design gained a huge benefit from this.

This is the seventh entry I wrote for the TRI dev log on TIGForums. You can find the previous parts there.

Yes, we and our project TRI are still alive! After a pretty long break at the end of 2012 we decided to move the game into a different direction, especially regarding the style. The story changed, too, but this is not quite as relevant, as the story and plot we thought of were never an integral part of the alpha versions. In the current pre-release we even removed any hint of story, because we want to add NPCs later, and concentrated on other stuff this time.

The pause in the last quarter of 2012 was mainly for doing contract work, to get some money for food and shelter - but it also gave us time to rethink some design decisions we made regarding TRI. The main concern was to make everything easier for us to create content, which means
simpler textures– mostly just quadratic tiles

random tiles on the walls

simpler mapping – standardized box mapping will do in most cases

visible seams - will be fixed 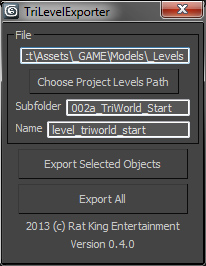 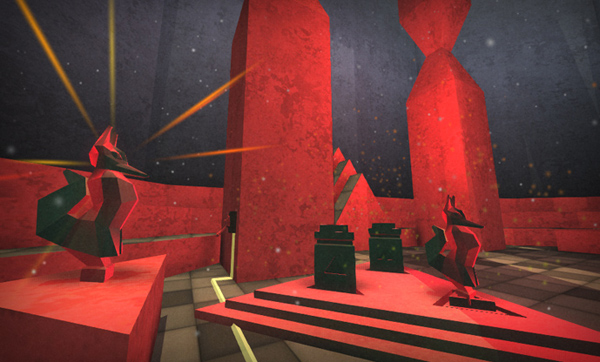 All this simplification resulted in a better consistency of the looks and the gameplay. The new art style can be tweaked quite easily by changing a few colors, the ambient light and the global fog. Improving the gameplay and layout of a single level even after texturing and mapping it became easy. With the new limitations, we can predict the ideal size and content of a level much better and we're more confident now when creating the level design.

We also built a tutorial mission which will introduce the player to the world, so it contains a show-jumping course for learning the basic controls, but will also be the start of the story, as NPCs will give the player motivation to actually move through the levels. 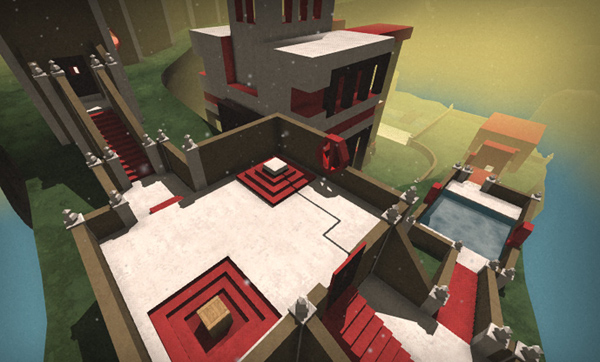 Right now we get mostly positive feedback, especially regarding the level architecture. But not enough people are playing the game – let alone buying the alpha version. The trailers we do might be big turn-offs, as creating the triangles seems tedious. It's actually fun and feels natural, but how can we tell the hard to convince trailer-watchers? We probably need to make it more clear that TRI's focus is not only on puzzles but also on exploration.

Tri is a brilliant game. I hope it gets more recognition in the future. I consider buying it myself but it just seems a little, I don't know, empty at the moment. good game though