Hello! GDC San Francisco was fantastic this year, but now we have returned home to Norway in the giant metal Flappy Bird and have finally recovered from the jet lag. We thought it would be interesting to write a quick post-mortem about our time at the show, the things we did well and the things we could have done better. If any other developers find this useful or if first-time GDC goers can glean anything from our experience, all the better.

Things that could have been better:

1. The very first thing I think of is that we were so excited to show off our game and interact with fans we forgot to go to GDC ourselves. There were five people from our team at the show and we were usually all at the stand. Three would have been enough for most of the time. I personally didn't see one talk and hardly wandered around the show at all as I spent most of the days with people who were queuing up to check out our game.

2. We could have been a little more prepared with bits and pieces for the stand, such as screwdrivers, gaffer tape, etc. When we turned up to put the stand together and make it look pretty we had to go and borrow a screwdriver from a team building a stand for a well known sportswear corporation. Later on we needed cable ties for our banner, then tape to stick down a sheet with the control scheme. We really should have had all this stuff with us. Next time we'll Just Do It. 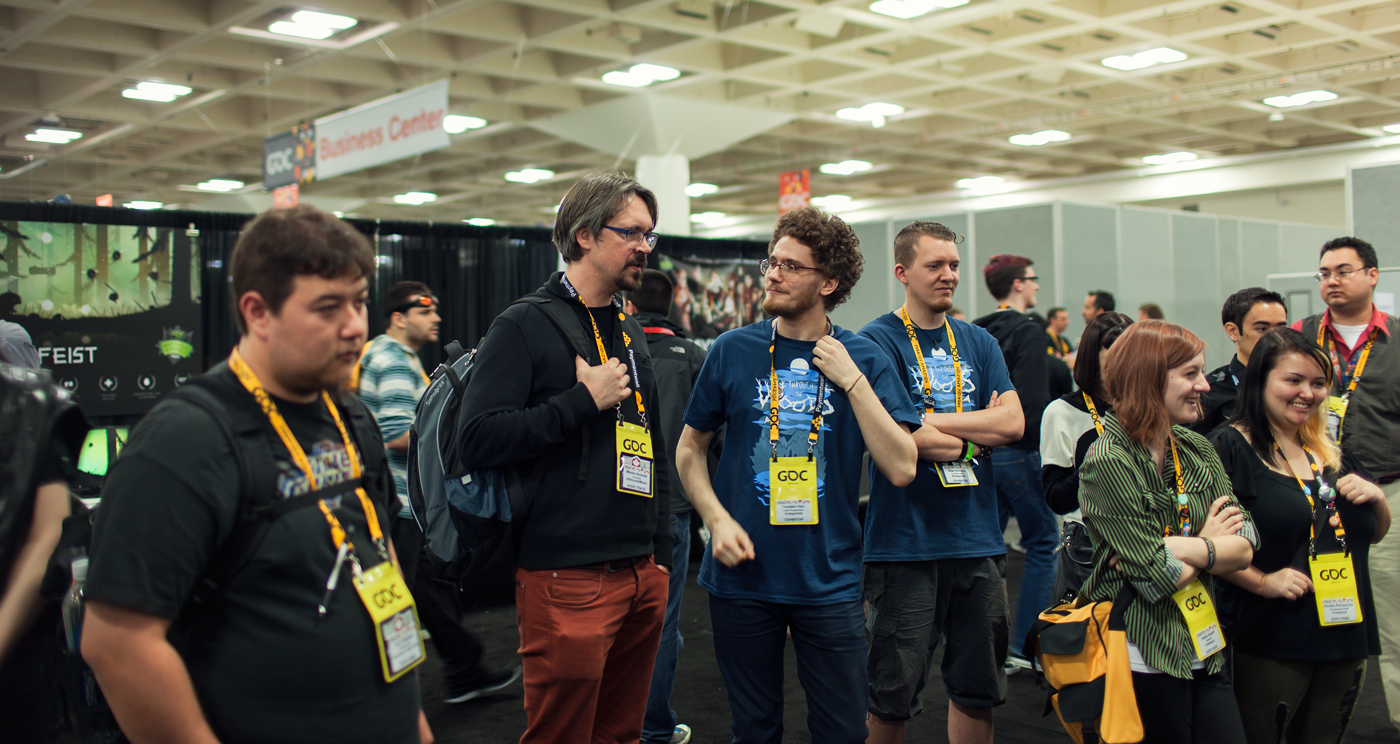 3. We could have interacted more with other developers at the show. We were mostly in our own little bubble on our stand, or were talking with the other Norwegian developers in the Norwegian Indie Games corner. I think it would have been fun to have gone around and chatted more with the other great indie developers around the GDC Play hall, learned a couple of new things from people with more experience of GDC than ourselves and maybe made some new friends.

4. We could have enticed more press to our stand. This is a tough one, but one of the most exciting aspects of GDC is all the press walking around. You can tell them apart by the red Media tags on their show badge. Now and again you will see them pass by your stand and sometimes they will stop and watch, or maybe play. This year we were lucky enough to be included in Game Informer's Best Indie Games of GDC 2015 after one of their journalists stopped by the stand. But sometimes they will glance at your game and move on and, after they go, you will wish you had grabbed them and forced them to check out your work. I'm not really sure this is the right way to go, but I feel there must be a good way to attract passing press. Next year we will hopefully have a better strategy for this. 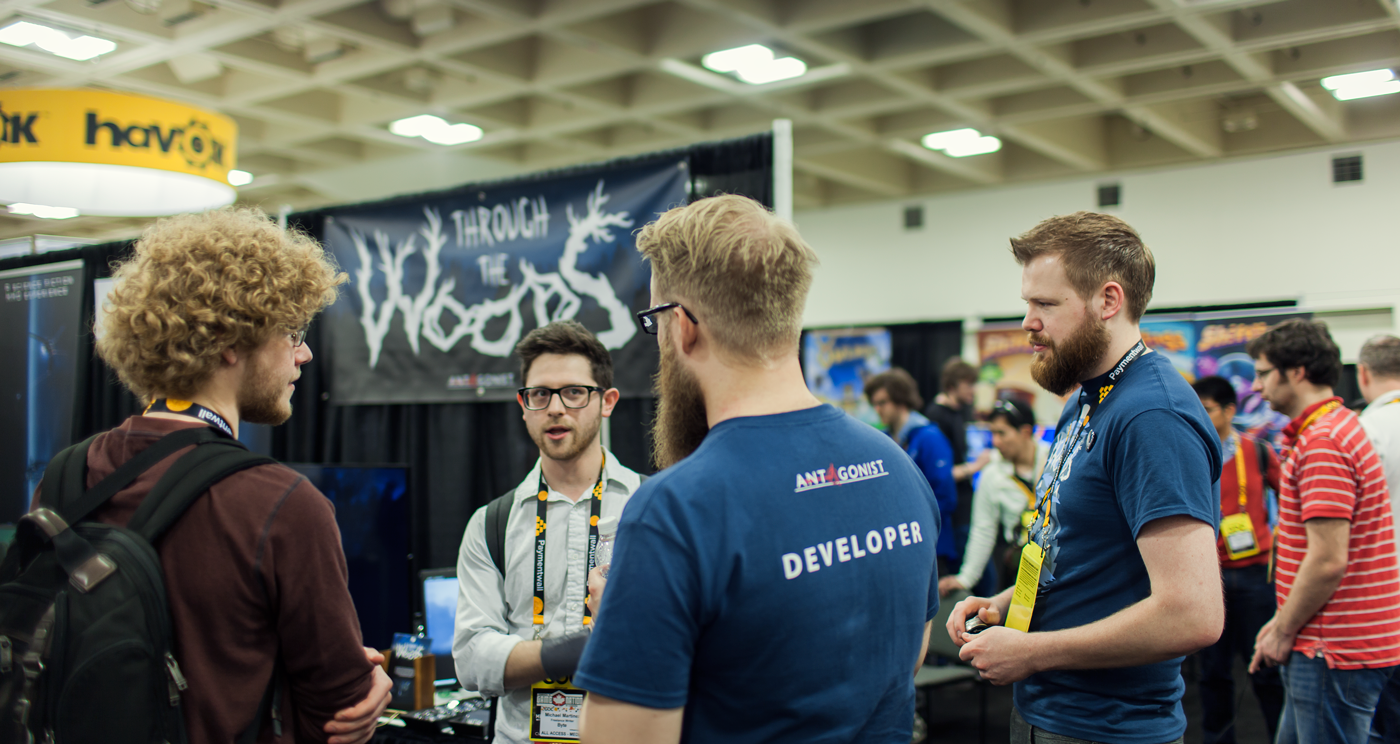 5. Spending the first five days in the hotel crunching and trying to finish our demo, then building the game on the stand at the last minute before the public arrived were possibly not our proudest moments. There were just a few little bits that needed work, mostly to fix small things such as the timing of subtitles and trigger placements, for example. But the better we made the demo, the more we wanted to fix, which turned into several days making slight changes and improvements. We also decided to cut out some dialogue at the last moment, etc. Which also leads to:

6. We missed a few parties and social events because of working on the game the first days. We did send an envoy to most of these; Anders, our producer, but it would have been nice if we could have gone as a team. For other expos we attend this year, at least we have a really strong demo already finished so we will hopefully not have to deal with the stress of last minute changes at a show again. At least not for Through the Woods, anyway. 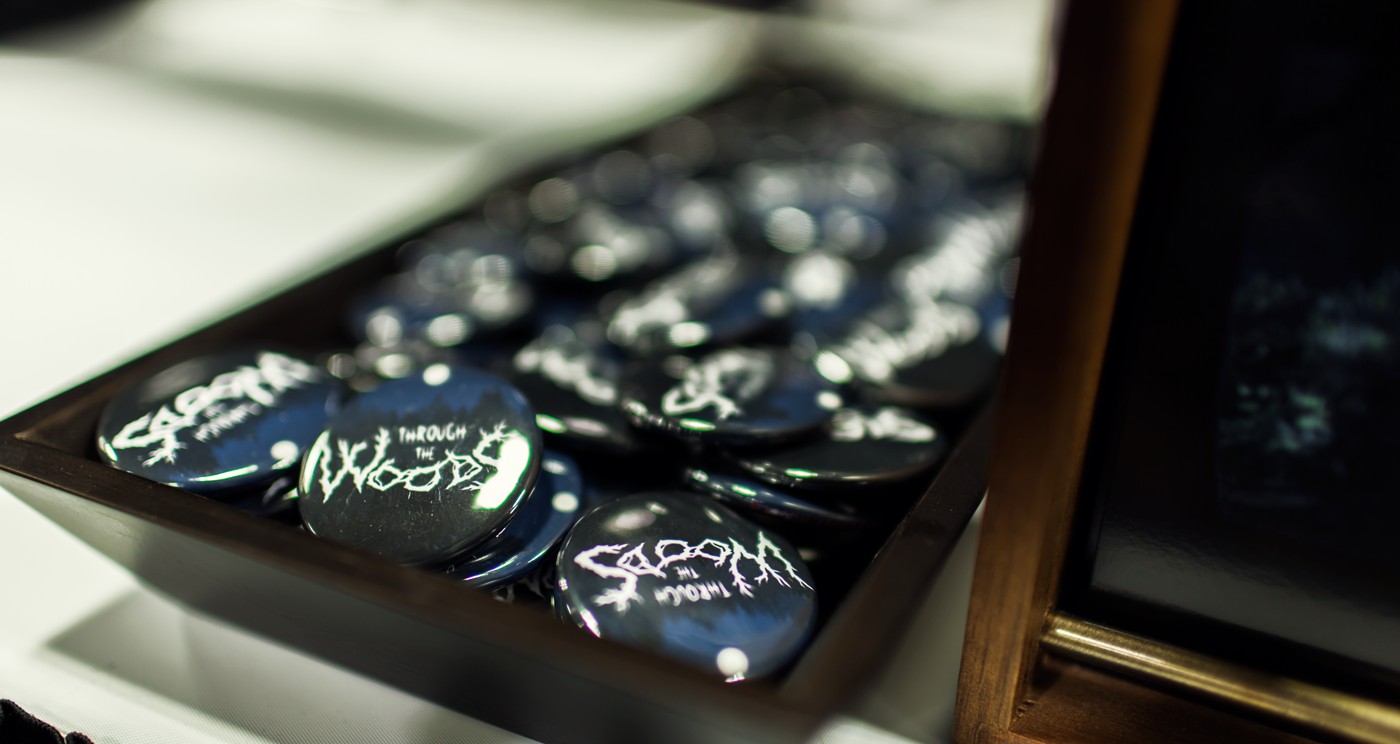 Things we did well:

1. Our demo looks and plays great, and the public, all complete strangers to us who had never heard of the game before, gave us lots of positive feedback. Pretty much universally so, in fact. We even joked there was not enough constructive criticism about the build, although there are still a lot of improvements we are aware of that we will be making to the game as production goes on. So all the crunching was worthwhile in those terms.

2. We were all really good at talking to fans and pitching our game. We have quite a complex story to tell and we have to be a little careful about what we say because potential spoilers could easily tumble out, but all of us did a great job explaining what our game is about and why people should be excited. We didn't really rehearse this beforehand so I was very curious how things would go, but everyone did a great job, consistently and throughout three long days.

3. The stand was really well organised beforehand and our merchandise and promo material was consistent. We had some great and very eye-catching art made for the show by our artist, Stian. We were equipped with a huge Through the Woods banner, branded t-shirts, hundreds of business cards for the game itself and each member of the team, leaflets about the game for those in a rush who didn't have time to play the demo, badges, etc. We also had plenty of water, snacks, chewing gum and such to keep us going between meals. 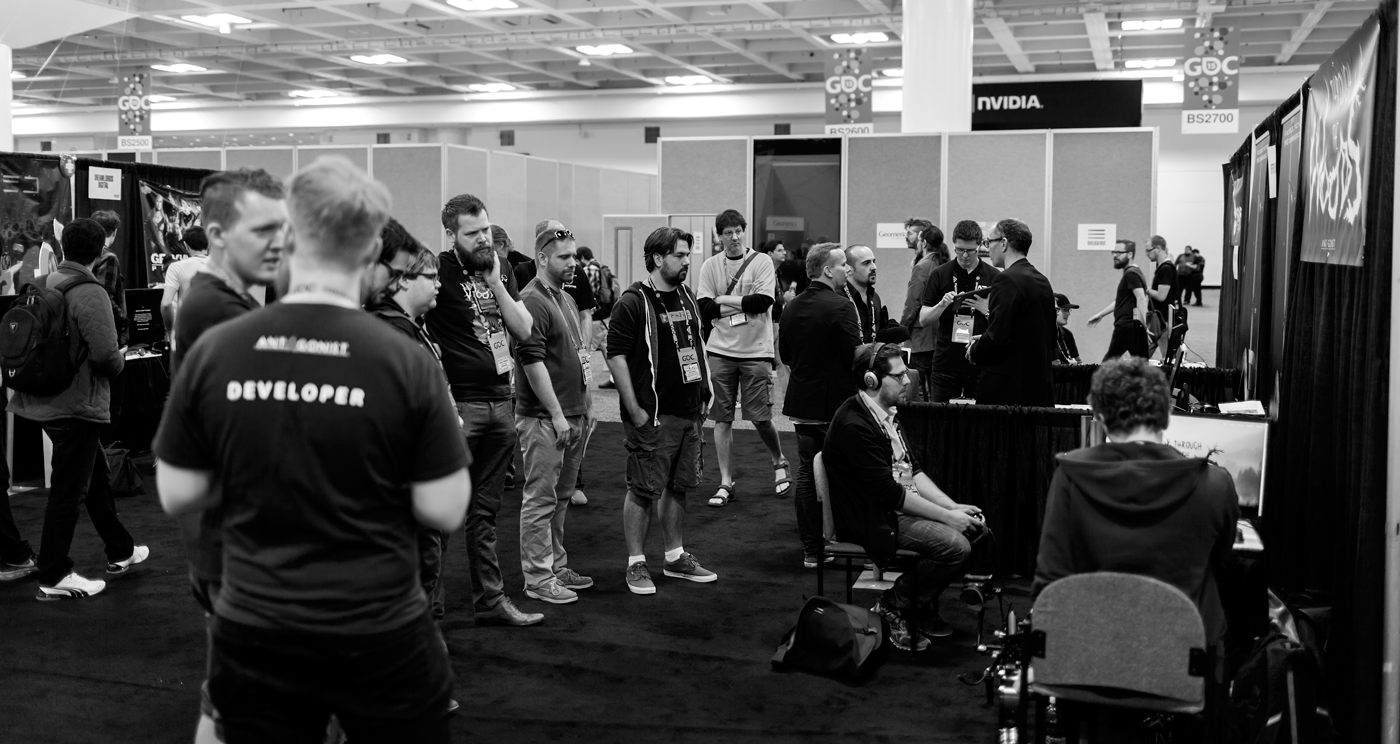 4. We collected and gave out tonnes of business cards, spoke to some super interesting people and made a bunch of useful connections. This is probably the greatest part of GDC; all the people you meet at the show, at parties and in random places while the show is on. The whole of San Francisco fills with tens of thousands of people attending GDC and you really can't go anywhere without the potential to meet other game related humans. So our cards are now with fans, other developers, talented potential contributors and students who all either stopped by to see the game at the show, or people we met in other places who wanted to find out more about Through the Woods.

5. Ten days was a great amount of time to be there as there is lots of action before and after GDC to experience. We know a few developers who arrived the day before GDC and left soon after. This is fine but I was really glad we were able to get there five days before the show and stay for a couple of days after. This also gave us time to adjust to U.S. time before the show opened. While we were mostly holed up at the hotel working before the show, we did manage to get to a party or two and a couple of meetings we had arranged during that time. It was also really lovely to just go out to eat meals and sit down with the team every night. It's not so often we have been this social with each other and it was a great bonding experience for us all and sometimes felt almost like a holiday. 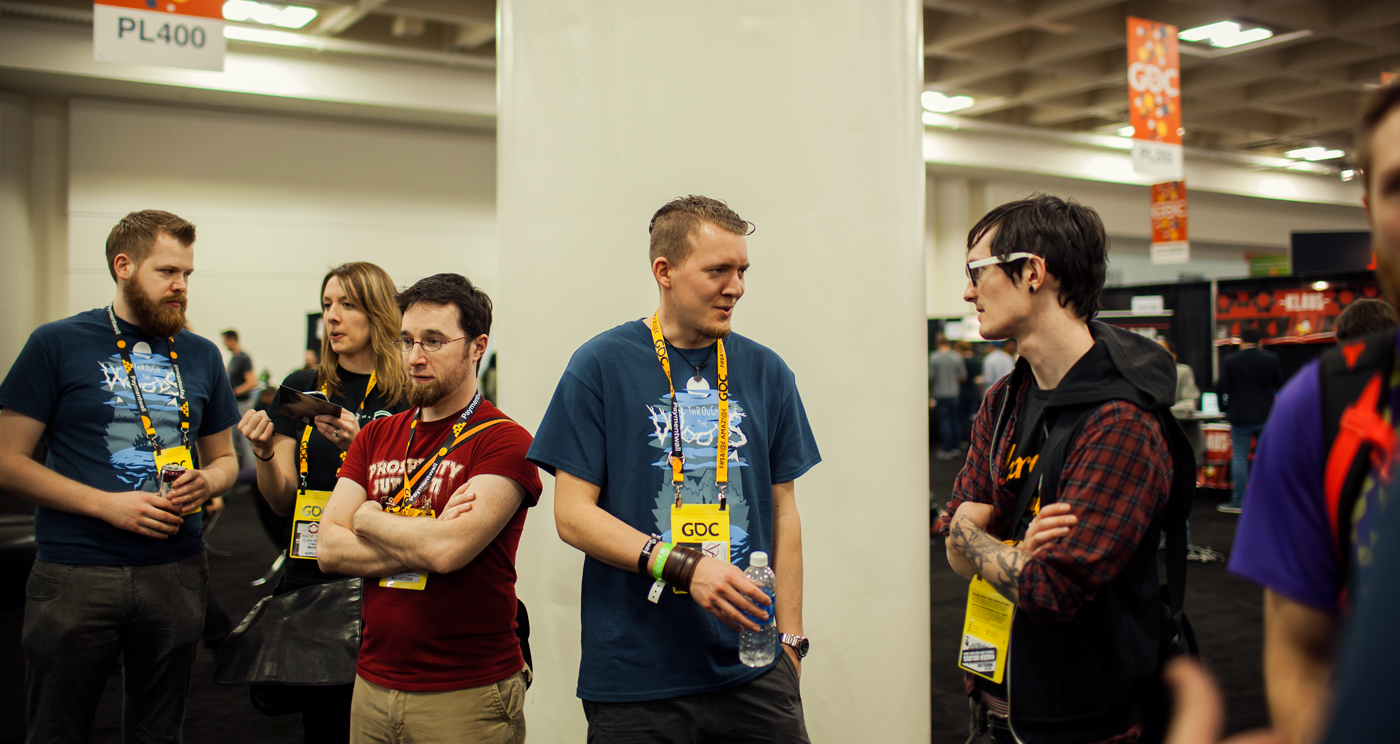 There you have it. We really hope you managed to find something of use here. We're already looking forwards to returning to San Francisco next year. Hopefully we'll see you there, too.

Nice read. I hope you had fun!

Thanks for reading, sir! We did indeed have a lot of fun!