We're working on it! As development, bug-fixing and polishing goes on with what is internally being referred to as build 9, again we're in the situation that all there is to report is our situation on the bug front and what's holding us back.

1) Remaining compatibility issues - Since updating on Desura, and having an influx of new players, there still seems to be some compatibility issues that need to be resolved. We're looking into this and will do our utmost to get a build up ASAP that works for everyone. Anyone with these issues should report in this thread with has much information as they can about their problem and we'll look to resolve it as soon as possible. In the grand scheme of things it's not too common an issue, but with a lot of new players buying on Desura it certainly feels that way at the moment!

2) Save compatibility - Now we're on Desura, we've got to try our best to maintain save compatibility from this point onward given the auto-updating system. This week we found a big issue with how the tiles were saved, that meant any additions to the tilesheets risked breaking earlier saves. This has thankfully been fixed, so all future builds will be fine. However there is still an issue with saves going from 8b to 9, so we need to come up with some way to convert the saves on load to preserve the map in people's save games. This shouldn't be a huge thing to resolve, and progress has already been made, but has been put on hold until issue 1 can be sorted.

3) New players / first impressions - Once these two have been resolved, and probably after 9, a big focus for us will be to add some tutorial helpers in there in the absence of Kate and Baldspot to address some of the common misunderstandings when playing the game. Stuff like how to charge and swing your weapon, not run about the place like a crazy person, how to climb in windows. While this may not be a priority for existing players, we're finding a lot of new people having issues picking up the game and the effect of this is just as bad in some cases as serious bugs in terms of first impressions of the game. 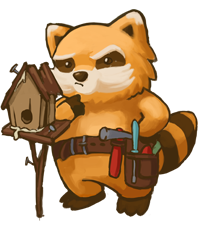 ...and we have our 'Pipboy' to help illustrate these lessons!

4) General fixes - again, something our community is likely aware of at this stage, but our bug fix list for 9 is growing every day. You can read more of them here. But in short, we've fixed a lot and once the above main issues are resolved, our next build should be a really good one!

Big thanks to everyone who's played, streamed, youtubed or otherwise made everything we do worthwhile. It's been a really exciting few weeks and there are just these remaining hurdles to overcome before we finally have the stable, balanced and fun build we've been craving for for so long.

Keep up the good work guys, cant wait for the steam release.

I'm waiting for NPC survivors to be re-added. Doesn't seem fun knowing that I'm the ONLY survivor and no one else.

I agree. I want NPC survivors back

You guys are awesome! I know there are a lot of sour compainers. but there are loyal fans who will continue to support you guys no matter what :) Keep up the good work :D looking forward to the future of Project Zomboid

I'm really pleased to see this coming along nicely. However, as a Linux (Desura) user, my install still doesn't 'just work' and, I see from the Indie Stone forums, the workaround still seems fairly torturous.

Any love for the Linux build coming soon?

I know a very simple fix to this problem and basically all you have to do is go to microsoft.com and purchase a copy of 'Windows 7' and then you're done! Enjoy :D

TheEnbeholden does have a good point...Microsoft only bitches and asks you to throw your money at them...hence the XBOX One costing $500!

man, just put this on steam early access. Insta-buy if you put it there

Making Sheet Ropes work and bringing the new player tutorial back is of priority. I enjoy the game, but when I first started I didn't know how to do simple things. Not sure why the tutorial was taken out but I think new players would appreciate it. Stick to updates on Desura, as they have some quality control (unlike Steam).

I am actually one of these so called "new players" on Desura and yes... i did struggle a bit with the lack of tutorials... nothing much though (I must admit the sheet ropes being broken has cost me some saves)

Either way, I just wanted to congratulate the team for the awesome job you're doing on the game. It's really fun to play (even though I haven't seen the previous versions with NPCs and all).

I'm really looking forward to the next steps this game will take and CRAVING for that multiplayer through desura or steam. I've been spreading the word about the game and everyone I show it to loves it.

Many thanks from your new Brazilian fan.

I agree that bug fixes should be a top priority. Bad press is not something that you want, I've seen more than a few scathing rants by folks that cant get the game to run properly. I've never had issues with any of the builds and I'm sure most haven't, but it's those few with issues that tend to be the loudest. (Besides Mathas, ofc)

Since this is Greeenlit on steam, will people who bought it for Desura get a code? I reallly hate using Desura, it is very finicky on my computer.

They've said keys will be available.

yes they will. it has been said many times :)

Of course everybody jumped at the chance to buy on Desura (indie funding, support devs and get the game at a cheaper price than buying on release day?) as soon as it was available. While at the same time being able to give feedback as you develop the game. I mean its good all round. I've waited way to long to not throw money at you guys first chance I get :D

I knew #3 would be an issue, I guess it may a little tough to start from the beginning but seriously people are way to quick to complain it seems. What ever happened to experimenting, figuring things out on your own. You pretty much had to do with every game back in the day.

Keep up the fantastic work! This is my favorite game out there!!!

Great game. Could do with a bit of improvement and maybe the addition of NPCs. But for an alpha, this game is amazingly fun. Huge amounts of potential- can't wait! Keep up the good work guys :)

Keep the updates coming! Both in text and in game!

I would love to play this game, but when it installs, it just says Project Zomboid is not installed on this computer, please try again after re-installing. -_- hmmm...wtf!!!!