Nobody ever expects it, do they? The Zomboid Inquisition? Apart from maybe the PZ community who collated their questions over the weekend for today’s Mondoid, and merrily clicked ‘like’ on the ones they’d most like to see answered.

We’ll get into our own variant of AMA (APZA? ATISA?) in a second – but first a few words on our next update and general Zomboidy news.

Lemmy has been taking a couple of days off NPCs (woah there, don’t worry) to improve the Lua debugging support in the game. The reason for this is the lack of a debugger in Lua, which means that tracking down bugs is nothing short of a nightmare. Instead of being able to climb into the code and poke around while it’s running, you’re left resorting to printing messages out saying ‘the code got in here’ and ‘if it went here then it gone wrong ARGH!’ - and watching for said messages when testing the game.

As such, we’ve developed a fully functioning debugger that sits directly in Project Zomboid. This allows us to step through the lua code line by line, see which way the code goes, inspect exactly what’s going on in there, line by line, instead of infuriating guesswork.

Words cannot express how much time this will save us in the long run: we’ll likely have gained the development time back 1000-fold before the end of the project. This genuinely could shave weeks off feature development.

The idea of writing an entire debugger never occurred to us because it seemed such a ludicrously complicated and long-winded job, but in a moment of madness the task was taken on and (after a full 36 hours of no sleep and numerous coffees and energy drinks) it’s already massively massively useful to the devs and modders alike. This makes us happy.

In case you’re interested, here’s a vid of it in action!

Romain’s work on build 16, meanwhile, continues apace – with the growing changelist for the next public test build found here. We’ll let you know when it starts to look Desura-bound, which’ll hopefully be soon.

And so, without much further adieu, here’s the very first ‘Ask Project Zomboid Developers The Indie Stone Anything!’ (APZDTISA!) These questions and answers are ordered, pretty much, by how popular they were – so feel free to get less interested the further we go!

Q. “How is West Point coming along?” from nasKo.

Q. “Any news about constant water source other than wells?” from jhepong24.

A. I think these two questions can be answered in a screenshot: 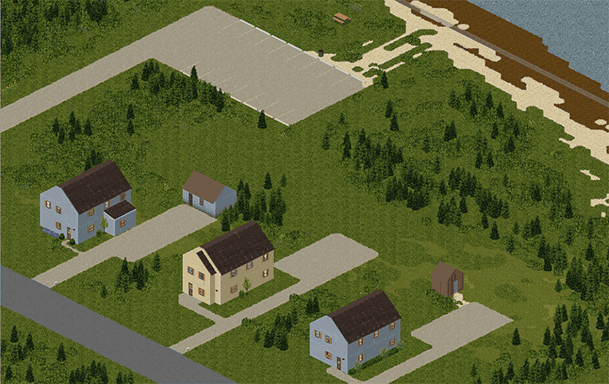 This is taken from the more outskirt-y bits of West Point, and in the top right you'll notice something interesting. (Mash)

Q. “I would just love to hear some more general info about how the whole npc-system is developing.” from RoboMat.

A. At the moment we have NPC groups being governed by a leader, going on looting missions and organizing safehouse defence, with a new combat system in the works. The issues at the moment are just making everything work solidly, leaving no room for characters to end up getting stuck while trying to walk somewhere and freezing. We’re adding content, but at the same time trying to tie up any of the loose ends and bugs that’d see NPCs break.

Once this is done we should see the speed of NPC development balloon dramatically. The further we go, the more tools we have at our disposal to add content quickly. It’s really exciting but at the same time has to be done right, so we’re not rushing it out there. (Lemmy)

Q. “When will fire be back?” from Zomboider.

A. Fire will be back soon (ish)! It’s a big priority for us since, for obvious reasons, it’s required for the tutorial to work properly. As you saw from the video a couple of weeks back, the tutorial is under heavy development, so hopefully you won’t have to wait for too long. (Lemmy)

Q. “How are your plans and ideas for new Jobs / Clothing and weapons you plan to add? Gives us some sugar “ from Gammlernoob.

A. Definitely, just a question of getting round to it. I have a bunch of glasses made and waiting to be exported, so that'll be the first set of accessories. Then after that, we'll look into doing more clothing types, since we'll need some for some of the characters as the story expands. (Binky)

Q. “What is the situation surrounding the map modding tools? Really can't wait to start doing the only thing I'm good at - making maps.” From AkHolic.

A. The mapping tools are rather feature-rich now thanks to some stellar work by Easy-Pickins which means that we've become much more efficient at producing map cells, to the extent that Mash frequently catches me up - producing content for the cells far more quickly than I can produce the terrain. (We might spotlight Easy's work in a blog all to its own in future weeks).

However, this all means that all this mapping power will be available to modders - there's no fixed timescale on releasing them just yet but, by and large, we’re thinking about when West Point is finished and we'll have had them sufficiently tested. (Binky)

Q. “How many Coffees do you drink per day to work on PZ?” from datkid.

A. I've cut down on the coffees. Have one or two at breakfast, and another to round off the day. In between: staggeringly large quantities of tea, but tea is not coffee so it's fine. (Binky)

Q. “With introduction of NPC's, can we expect something like ‘up to 3 NPC friends’ on spawn, with customizable looks, names, professions and even your relationship to them?” from LeoIvanov.

A. We actually have some interesting plans regarding this. Certainly in character customization you should be able to specify that you’re married, or have a brother/sister who may be around. One day we’d like to do a kinda G.O.A.T test style Choose Your Own Adventure before you start playing (you could revert to standard character customization if you wished).

This would detailing key events in your life and choosing what you do, to shape your character. Then perhaps a bunch of questions about the day of the apocalypse. Were you travelling down the highway to meet your wife from work maybe, or laid in bed after pulling a sickie at work?

This would define your starting circumstances, and may add additional quests for your character to try and complete during the game, such as reuniting with lost loved ones and so on.This is a while off, of course, but it’s something we’ve talked about a lot. (Lemmy)

Q. “In a screenshot a while ago I noticed NPCs sitting on chairs and the like ... will us as the players be allowed to sit down on chairs?” from Rancorist.

A. Yeah, the ability to sit on chairs is sort of functional but it's a bit rough-and-ready at the moment. There's obviously slight draw-order issues with having a character sit down on a chair that might have a high back and arms, so the initial version of that functionality will definitely have some glitches. But we'll improve this later down the line. (Binky)

Q. “Will there be layers below the surface some day? Tunnels, underground parking lots and basements would be a great addition to the game world.” from topy.

A. Yes, this is something that is planned in the future. (Mash)

Q. “Do you plan to implement the more powerful, game-mechanic altering mods into the vanilla game if they are in-line with your long term goals of the game and are widely popular? For example - Stormy's reload mod. How often will you be accepting mods like stormy's into the game? ” from Burianu.

We would certainly consider doing it, and as you say have already done so with Stormy’s mod. Hell, we took RJ on board and snaffled up all his mods (and got him to re-write them into the new UI and improve them) once he had code access! At the end of the day though if we kept taking everyone’s mods and integrating them into the game, there would be no mod community. We want modders to keep doing what they are doing. (Lemmy)

Q. “Is the engine pretty much done or do you plan any bigger changes?” from Dr_Cox1911.

A. Hahaha, oh we have big plans. Long term plans though, and we’ve fought against the urge to act on them yet! Just compare the pre-alpha tech demo to the game now, and you’ll see we’re constantly trying to improve the engine and graphics. At the moment though, filling in the holes in the gameplay comes before anything else! (Lemmy)

Q. “I'd like to know if modders could have a separate changelog where we can see changes in lua, folder structures and things like that. It would really be helpful. I'll certainly give a hug for that, at the Project Zomboid conference which is bound to happen someday.” from Aricane.

A. This would be great, but to be honest when developing the game, it’s really really hard to keep track of changes to that detail. Once the game is in a more stable complete state, we could certainly look to do this. (Lemmy)

Q. “How is the Dragon implementation going and will they be as OP as expected?” from Tooks.

A. Dragons were so OP they crashed all of our computers. They will have to wait until future CPUs can handle their mightiness. (Mash)

Thats a really nice debugger nice job! Sadly the engine i work on doesnt has any sort of debugger so i gotta go trough the typical log way " Lets hope it gets past this message so i can guess it did worked" heh

Nobody expects the Spanish Inquisition!

Amazing guys. Your working nice and fast and its coming along quickly, keep up the good work

This game looks better every day :)

i have a question, can you become a follower of a NPC leader? maybe later you can challenge him/her for the control of the rest of the survivors

how do i update

I remember they saying you could join another group, dunno about the takeover tough.

Shiny.
Those guys are at 'em!

A very sexy video of how the magic is done. The developers so called 'wet dream' a.k.a The Debugger. Squish those Zed's dead and now bugs even deader!

cant wait for npcs lolz..
pretty much the only reaon im not playing now

I'm getting a dragon sized erection in anticipation.

If you're going to do an AMA, please, please stay away from Reddit.

man those dragons are so op...

speaking of npcs just out of courisity well will have to defend vs a rival group like woodberry from walking dead ??