The Protectors dev team is finally ready to present the long awaited new version of your favourite game mod: The Protectors version 0.8.6. With over 580 changes, the game is now more stable and more fun than ever.

Fresh install! Uninstall all older versions and delete The Protectors folder in My Documents

Other issues on modern setups: read this how-to

Firstly, many improvements have been brought to the AI. Compared to the original game, these newly modified AIs now have a realistic economy: they are no longer cheating, but instead carefully use their resources, making use of intriguing strategies to surprise the player and ultimately attempt to defeat him. They produce units that counter the enemy’s, they prioritize certain researches which can bring them advantages in their environment. They take great care of their hero, retreating to a tower when the odds are not in their favour. Lastly, we added an even harder difficulty than the existing game had, the Grand Emperor, using some unique strategies never before expected from an AI.

Of course, an improvement of the AI helps both the single players and the players who like to play together online. Our focus was directed towards multi-play, implementing a new chat system that allows more text and displays the portrait of the speaker. The chat is even available while players are syncing right before a match. Admins have access to some special commands to enhance and keep the order on their servers. Because sometimes a match can last for quite a few hours, players can now pause the game for everyone, with the other's permission of course. To increase diversity, we also added a new map pack which includes tens of new battlefields with missions. Certain fan requested game options were created, such as the No mine depletion game type. 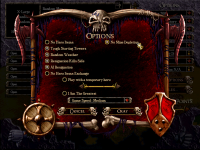 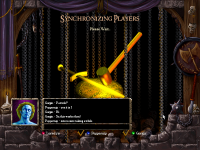 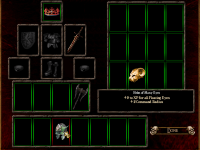 Balancing the units and their cost was the next step to improving the competitive gameplay we find in multiplayer matches. Many new researches and abilities were added. Heroes in particular were greatly redesigned, swapping skills or adding new ones, changing perk effects, and balancing racial synergy bonuses. Fourteen new hero items were added, and old ones had their effects changed, rebalanced. For instance, it is not rare that heroes wielding a sling will actually have a ranged rock attack. Journeymen might sometimes encounter even cursed items, giving both a great bonus and a negative mysterious side-effect. Victorious players will have their army gather the spoils of war – a new feature often resulting in a collection of dropped hero items. More adventure awaits your hero now seeking tens of quests from the new pyramid building, or by approaching the dangerous Fey lair. We have also added new units, like the Night Dragon and the Sol Dragon. 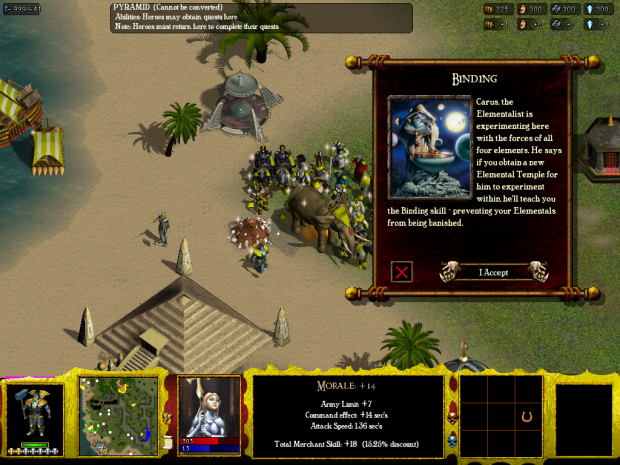 Visually, many new hero avatars were added, including the Female Ssrathi and the Female Daemon, all fitting the original game’s graphic style. The UI has also been improved adding a new RSB button, more accessible than the older one. Certain button icons were redesigned for a better understanding of their functionality. The old troublesome food display was now updated to allow for a better understanding. Resource income is now also displayed. The tutorial was of course updated to reflect these changes and we encourage even the veterans to go through it. The loading screen page has been increased to allow for more text. Several pop-up boxes were enlarged and had their text alignment changed to show a more pleasant arrangement. Some units were re-coloured to better fit their racial theme; others were corrected at pixel level, removing unwanted graphical glitches. The mini-map has also received some attention, now showing more information with mini-icons of different features like rocks, houses, trees. Players may now experiment with a new cave terrain set, a brainchild of Extorias. 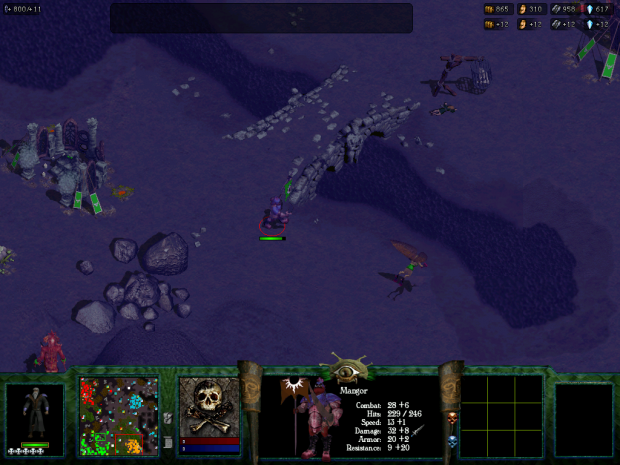 Audio-wise, we’ve added several new voice sets for different units (dragons, heroes) courtesy of the resourceful voice actors Ronnie is Ready and Sarah Mears. A variety of weapon sounds were added, creating a more appealing battle atmosphere. The Protectors Original Soundtrack has been expanded with four more compositions by Andre Paiva. The modularity system was also improved and made to play only soft songs at the beginning of battle, and reserves the vivacious ones for later in the game. To help the player in creating his own custom soundtracks, we’ve added an option that shows the title of each playing track in game. 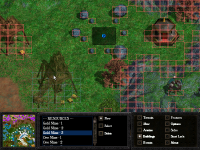 Speaking of customization, the in game editor has been greatly improved to ease the work of map-makers. New special effects can now be added, as well as visual and sound effects. A really helpful tool in creating the topography was created, smoothing and varying terrain tiles, all with a click of a button. Item chests can now be edited, showing details of each item and its effects. Another option we added is showing the blocked squares of a map, making the process of blocking paths easier than ever. The Random Map Generator was slightly improved as well, now correctly randomizing starting positions and utility placements. For the script users, we also added a handful of useful NIS commands, all explained in the manual provided. Story loving fans now have more flexibility in creating their own chapters and campaigns: they can now customize their own companions.

Since not all story loving fans are also creators, we have substantially added to The Duernothian Cult custom chapter, as well as slightly modifying the official ones. Descriptions of items were also updated to better reflect the lore of this fantastic universe. Minor modifications were brought even to the vanilla campaign of Warlords Battlecry 3. All of these are available to play with this installation.

As per usual, a multitude of bugs were fixed, both vanilla ones and TPC-created, including the Ironman Mode fix. Safe to say, this mod is now more stable than all of its predecessors. Expect no CTDs or weird happenings. This is a very short summary of the changes we made from the previous version. We really, really tried to make it short, not entering into details and showing only the important highlights. Of course, for the more curious of you, there is always the online changelog available for your perusal.

Needless to say, we couldn’t have done all of this without your support. We thank all of you for helping and inspiring us and hope to continue in this fashion. We also recently opened a donations account for anyone willing to offer optional financial support.

Congratulations on the new release!

However, I've encountered a problem with the game.

Every time I want to play skirmish, I have to create a new hero. I simply can't access any previously created heroes. Is this supposed to happen? Are the heroes deleted after a match? I set the Protectors.exe file to run as administrator and with WinXP SP3 compatibility (my OS is Win7 btw) so the saving system should work, but it doesn't.

Delete your my documents/the protectors folder. Please read the Requirements next time, ok?

It worked, thank you.
Sorry for the trouble.

Congrats on the release!

I also experienced an problem with the game though. I installed it but when I tried to launch it nothing happened. During the install I was prompted by Windows to install some other software (DirectPlay I think?), which I did. I'm launching The Protectors.exe from C:\Program Files (x86)\The Protectors. Any suggestions about how to fix this?

Thanks, I'll check this out.

Im just wondering i saw u made a complete new story for your hero, but the version i had after leaving the first island it says the game is over and i have to wait for the full version ? May i ask how far the complete version is ? I really like this game

We've got all chapters ready (one for each race), but the unreleased ones need to be polished. As for The Protectors Campaign, you currently have just the first part released, but there are two starting locations (Dragon's Maze and The Wastes) depending on hero race. The rest of it is only on paper for now, excluding some punctual (side) quests.

is possible to set attitude for group of units ? , i mean if i have ten knights in group 2 and sets attitude to rampart not all spread around map randomly but act like group and move together?, the new gameplay is very good, and AI, units balance, hero system, is fun to play, i say its perfect
HD resolutions need to be improved cuz menu is so tiny, and text is hard to read

HD resolutions were added in version 0.8.7. As for group attitudes, I'll add that to the TO DO list.

Hello.
I have this version installed, but the game does not show any icon
Soldier and hero does not show.
I think the game needs to crack!
Please help me if you know what the game difficult.
Thankful

You need to run it in compatibility mode for Windows XP. Version 0.8.8 should do this by default.