An action open world RPG set in a dark, ancient world with sci-fi elements. The main character, a space explorer crashes into a dark, gritty ancient world where gods are real and periodically descend from the skies to get their offering of living humans. Master classic weaponry like sword and bow or learn the art of controlling ancient artifacts to survive and ultimately find what Gods' true intentions are.

The main character, a space explorer crashes into a dark, gritty ancient world where gods are real and periodically descend from the skies to get their offering of living humans. Master classic weaponry like sword and bow or learn the art of controlling ancient artifacts to survive and ultimately find what Gods' true intentions are.

The next Descend is about to happen and gods will soon arrive from the skies to get their offering of living individuals. The Outlander finds himself crashed in the dark, mysterious world of Eldasar where he will learn how to survive, discover its people and their mythology and ultimately uncover the Gods' true intentions.

The main character crashes to a small island where he will learn about the basic survival skills he will need to confront the bigger world. He later gets to know the factions of Eldasar and the chapter ends when when he joins one of them.

The Outlander will witness the Descend and then use his newly gained skills to gather the seven ancient crystals scattered throughout the archipelago and use them to activate the Portal to the City Of Gods.

It's time to confront the gods and decide the fate of the people of Eldasar.

The game takes place on Eldasar, an archipelago consisting of six islands surrounded by what its inhabitants call The Great Shield, a defensive barrier built by the gods to protect their people. 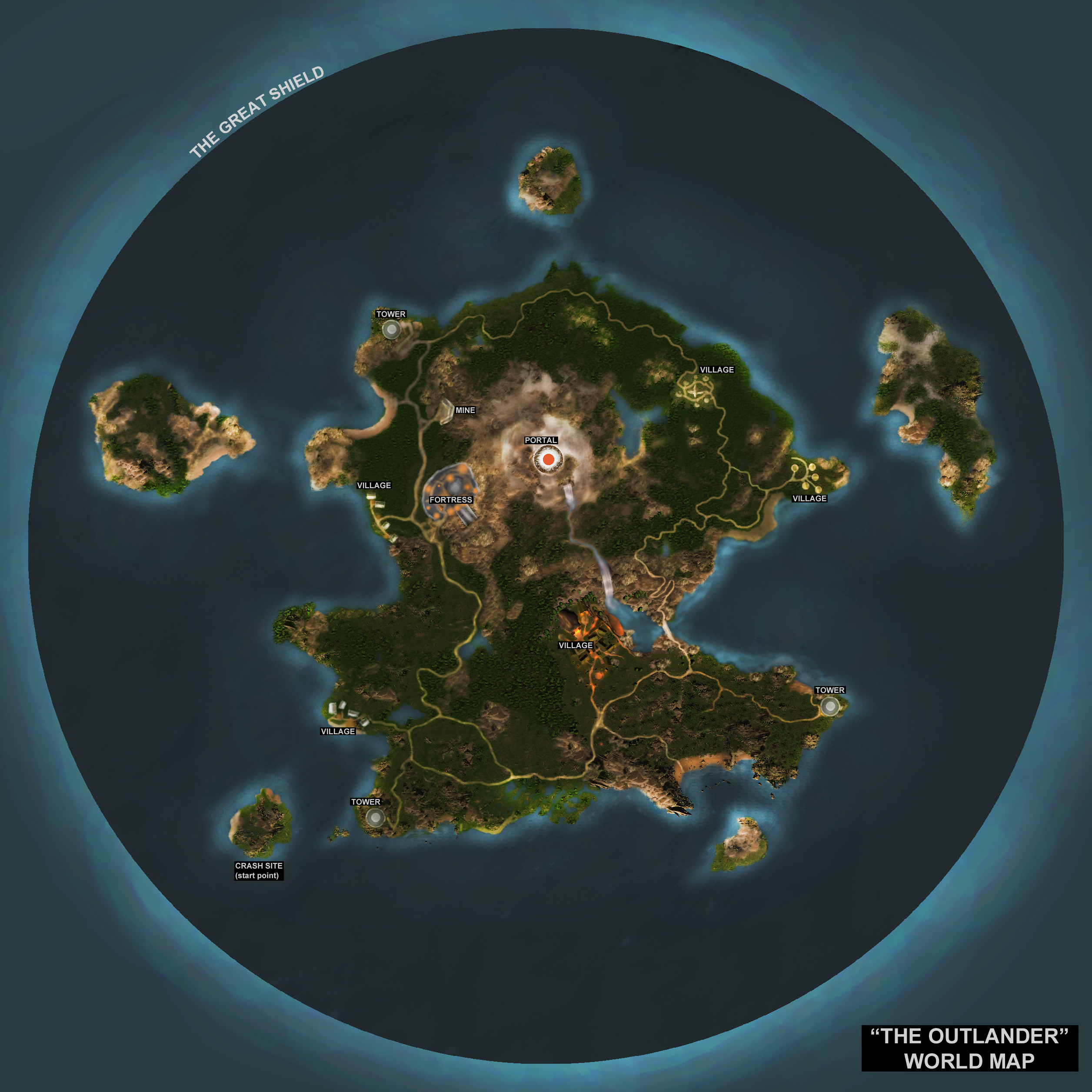 There are three main factions living on the main island and each of them has its own patron deity. In exchange for their protection the gods periodically descend from the skies to get their offering of living humans from their people. The relationship between the factions often reflect the one between their respective gods.

People of the Sun

The People of the Sun reside in the great fortress of Dullmor and their god is Hellgon, the God of Light. They are excellent craftsmen and merchants and have the largest mine in Eldasar. Wearing the best equipment their warriors have the reputation of being the best in the realm.

It is believed that Hellgon is the most powerful god and during the Descent will take the biggest offering of humans.

People of the Sea

The People of the Sea' main settlement is Fellvantor and their deity is Aroth, the Water God. They are renowned explorers of the seas and it is believed they are the ones who best know the outer islands of the archipelago.

It is an honor for these people to be taken as an offering by Aroth.

People of the Forest

The People of the Forest live deep into the woods in the and worship Farruna, the Nature Goddess. They say the forest provides them with everything they need. They are good hunters and masters of Telekinesis.

Their goddess, Farruna only takes women during Descents.

Explore the world of Eldasar for rare items, improve your skills, get better equipment and complete quests to get more experience and unravel the secrets of this dark world. The Outlander will offer 12-15 hours of gameplay for completing the main story and an additional 8-10 hours for the side quests.

The main character can learn skills from NPC trainers throughout the world once he gets enough experience (skill points). Most of the time he'll have to pay for these teachings.

Mastering all the combat techniques in The Outlander can be a very difficult task but being very good at one or two of them could get you through almost any situation.

The world of Eldasar has ancient artifacts scattered through the land, some of them being very powerful. Learn the Telekinesis skill and master these strong allies.

The world of The Outlander is designed with an emphasis on exploration in mind. Exploration can get rare items and hidden quests to the player.