This is a more technical update than usual to shine a light on the guys who do a lot of the things that support our work that you don't think about, and talk about nerdy code stuff. Changes to our backend infrastructure, a new frontend, updates to gameserver management and moderator, plus piles of fixes everywhere! This update is so great, it's turned our one-dimensional projectiles into actual three-dimensional entities! (that change really happened)

Let's get this update started with a mindblowing Easter Egg that we recently noticed. We're building on top of a fairly ancient engine, so you'd imagine that most of its secrets had already been figured out. But, wait till you hear this.

It turns out that if you open the menu/map in Renegade, you can hold "control" and click anywhere on the map to instantly teleport there. Go ahead and give it a try. As far as I know, nobody's ever mentioned this functionality, but it sure isn't anything our tech guys have added; Jonwil actually found this by accident while searching for a way to find out proper coordinates and height levels, something our new map display and superweapon deployment system needs so you can summon up an atomic bomb or reinforcements without them being stuck in the ground. It's mindblowing that this isn't common knowledge, since it's not particularly hidden. The moment you hold control, the cursor changes to a pointer-finger to select your new position, even. It's crazy, the things we still find after all this time.

For this blog, we'll talk about some new technical development since the past several have been about gameplay development instead.

As you could tell by things being a little weird in the past week or two as changes were made, the server infrastructure that powers the forums, IRC, and Teamspeak was upgraded and overhauled recently thanks to Catalyst. You should be able to post new topics like normal; if not, try replying to at least one topic first. We're still working on some things, so pardon our dust, but have recently added a new Teamspeak display to the front page, a new prototype ranking page and personal display to sit on the right hand side of the site, and One Winged Angel is finishing up work on the new forum themes so you can expect to see those really soon. Check out the AR April Blog for a preview!

This topic recently came up as somebody asked about feature changes for the existing launcher, and we played it a bit coy, hinting that we wouldn't be updating the old launcher. Naturally, this means we were already at work on a new one. Danpaul88's piecing together a unified front-end for all of our projects, actually, so you will be able to get it with your copy of APB or AR, but you'll probably first experience it when you download Tiberian Sun: Reborn which is in final testing for an initial public build.

Much like the existing launcher, you'll be able to get a light news feed of game/server news and upcoming events, and we're also looking to perhaps integrate the forum live chat. This way, it can serve as a general lobby for all projects and a place to gather if you're looking to start a round, and be a bit more approachable than IRC. No extra login information or software to download that way. The launcher will link right to your forum account here, so you won't be posting as a guest in the chat, and any name you use to join the game will be used to record your own personalized statistics. This means that if you decide to affix a clan tag to it, or just want to use a silly name for the day, you won't need to worry about giving up rank info. 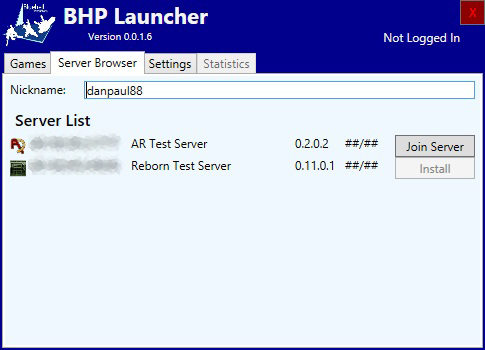 The new launcher will also accommodate support for beta versions, and automatic patching for release and testing buildings. A lot of testers have wanted something like that, because juggling several internal builds can be tricky. This will make it easier for us to make open testing builds available, without players worrying about screwing up their release versions. It will also have more redundancy for pulling gameserver data in case one service or another is down, so a simple site outage or blocked port won't leave the server lists unavailable. Just like the current one you'll also be able to configure your graphics options and preferences there.

Naturally there's backend work to be done for the bot and stats, and a few people have already noticed the changes for the bot. While we're now primarily using Skype for internal chat communication, and will be using the forum chat for the launcher, IRC remains the server moderation platform of choice. Hopefully with the changes, game-specific settings can be more compartmentalized so we won't need to maintain several hacked-up server management systems.

To that end, we're not using the EVA bot, and instead, Catalyst and Danpaul are working with a newer version of BRenbot (1.5.3) with dynamic plugins and less hardcoded stuff. If you run into any problems with the bot while playing, please don't forget to report them in the new ticketing system. To support the new stats stuff, we've had triattack looking into different ways of logging differerent data so we can hopefully provide more interesting results beyond just kills/deaths. We'll have a new database system to keep track of all of that, too. We're just as interested in your stats as you are, since it helps us to identify balance problems and trends.

Jonwil, Saberhawk, and Danpaul have been making great progress when it comes to the code that drives the games. The new AI has helped out the new APB rebalancing greatly, since we can have hordes of vehicles and infantry shoot each other and look for odd circumstances. But there's some cool stuff that can't easily be put in a YouTube video.

Something we've been looking into is the mechanics behind the guided weaponry, and projectiles in general. We'd like to make more sensible homing missiles, because the mechanics are so opaque that a lot of digging had to be done to understand exactly how a weapon decides it has "locked on" in the first place, and how missiles and the AI know where to aim on a vehicle to prevent silly things like a missile going between the legs of a large walker. One change we've wanted for quite some time is the ability to "size" our projectiles for purposes of hit detection. This might come as a surprise, but as far as the game is concerned, bullets and the huge V2 rocket are actually the same tiny size. Thanks to Saberhawk, that's no longer the case; in fact, we could do things such as giving anti-aircraft weaponry slightly larger than usual hit detection, so SAMs can have a sort of proximity fuze. "Larger" tank shells will mean better odds of pegging soldiers, too, since it's sorta hard to do with the hair-thin projectiles right now.

Several bugs were also identified and fixed, including one that causes weird positional inaccuracies in maps that have tall peaks you can climb. There was also a problem with breakable meshes on non-static objects, which is why you could never shoot the glass out of a Ranger, which is now resolved. A bug with AI turrets that would keep them shooting was also found to not be caused by AI oddities, but just missing a flag to notify players that they had stopped shooting, although that hasn't been solved yet. Being sure all the proper data gets sent over the network is also what prevented the Tesla Tank secondary weapon from being a distinct firing mode (that's now solved, actually). A bug related to rebinding/remapping mouse keys was also squashed, so people with gaming mice can rejoice.

It's not all bugfixes of course. Do you like using the right camo on maps, but hate looking for it? A new set of code from Danpaul lets your vehicle automatically select the right look for the map, too. And speaking of other annoyances, we can now set the "unsquishability" of things right as a checkbox in LevelEdit. Before, only a trio of special armor settings let you avoid being run over, which was a real pain to work around (especially for AR, since their veterancy system lets units earn new armor classes). There's also new support for doing fancy effects like the collapsing walkway on Fissure and the rock/ice on Under that was originally supposed to fall on its own after a while, but was surprisingly difficult to set up.

There is also a whole pile of new code in support of Reborn that other projects can make use of, including code for the underground system, the new EMP logic, and the ability to force infantry in/out of units -- that last one was something the old Chronotank setup had trouble with, so with that gone, we're closer to having that in a public build. We sure plan to. TheBeerinator's working on the texture for it.

New deployment code is also being worked on, which can be used by things such as the Nod Tick Tank, the Soviet Siege Chopper, and the Allied Tuck That Carries Newly Bought Turrets Into Position. Plus it's very similar to the code needed for handbrakes, a very popular request that we aim to include to make aiming artillery vehicles easier. We've actually got some other ideas for the artillery to let you aim their vertical angle with the mouse wheel, so you can keep a constant angle and make small adjustments as you look around with traditional mouselook to observe your surroundings without throwing off your arc and ruining your ballistics, and prevent simply being bumped from doing the same.

TruYuri is back on the case, fixing several rigging issues with our vehicles. You might've noticed the infamous "tapping foot" for the Heavy Tank. In the process of reviewing this, he's figured out a way to set up more convincing tank track suspension systems, which means more realistic looking vehicle movement/physics. Especially important for those of you who are really into tanks.The APC and Phase Tank will also no longer be so "bouncy" as a result, which is important as we re-evaluate vehicle speeds, and enacted similar fixes on the Tesla Tank and MRJ (same rig there) since those vehicles had extra mystery wheels.

It also explodes nicer!
There's more to what he does than just messing with vehicles, and he's also fixed the metal shine on the Tesla Coil to be less fullbright/obnoxious and corrected several other texture errors, and also breaks in our internal naming conventions. The Coil's death is now a bit more dramatic and features the intended particle effects instead of just falling over.

Have you ever noticed that the menu in the game isn't actually centered right? Thanks to some help from Jonwil, TruYuri's also fixed that up!

Quite a long read, so that's where we stop for now. More technical stuff, and its implications, next time.

wow sounds nice! Keep it up :)

Yes, the goofy map that never seemed to be much use.