Get ready for Tainted Fate's biggest update yet and just in time for Halloween! (Obviously our favorite day of the year.) In the two months since the last update we focused on improving the graphics and overall look of the game, we've added new gameplay features, dismemberment gates, new ways to tear apart enemies (sharp objects, yay!), blood stains, we've started the final boss fight overhaul, new levels and bug fixes and other things we forgot to mention. Fun stuff! 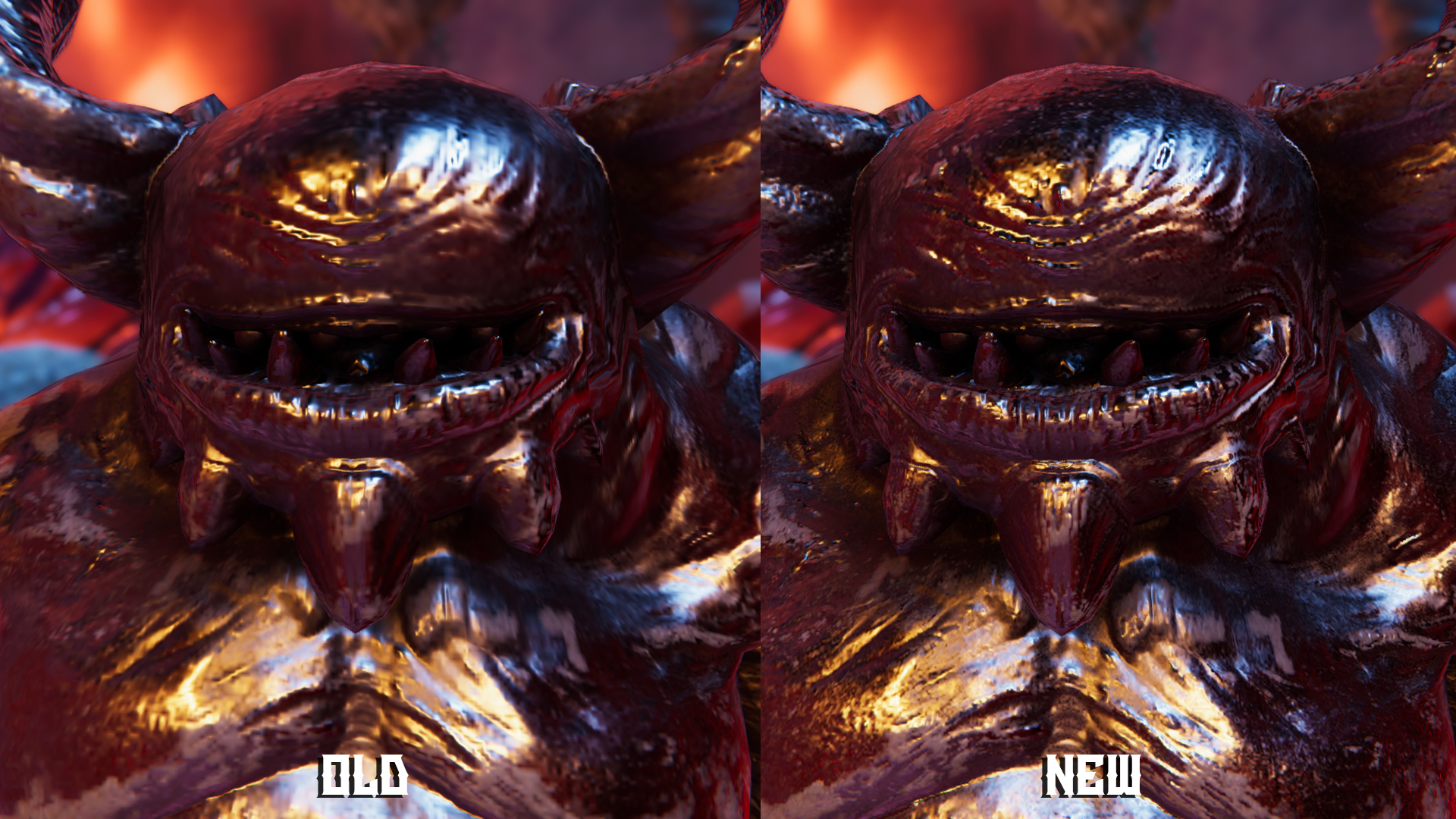 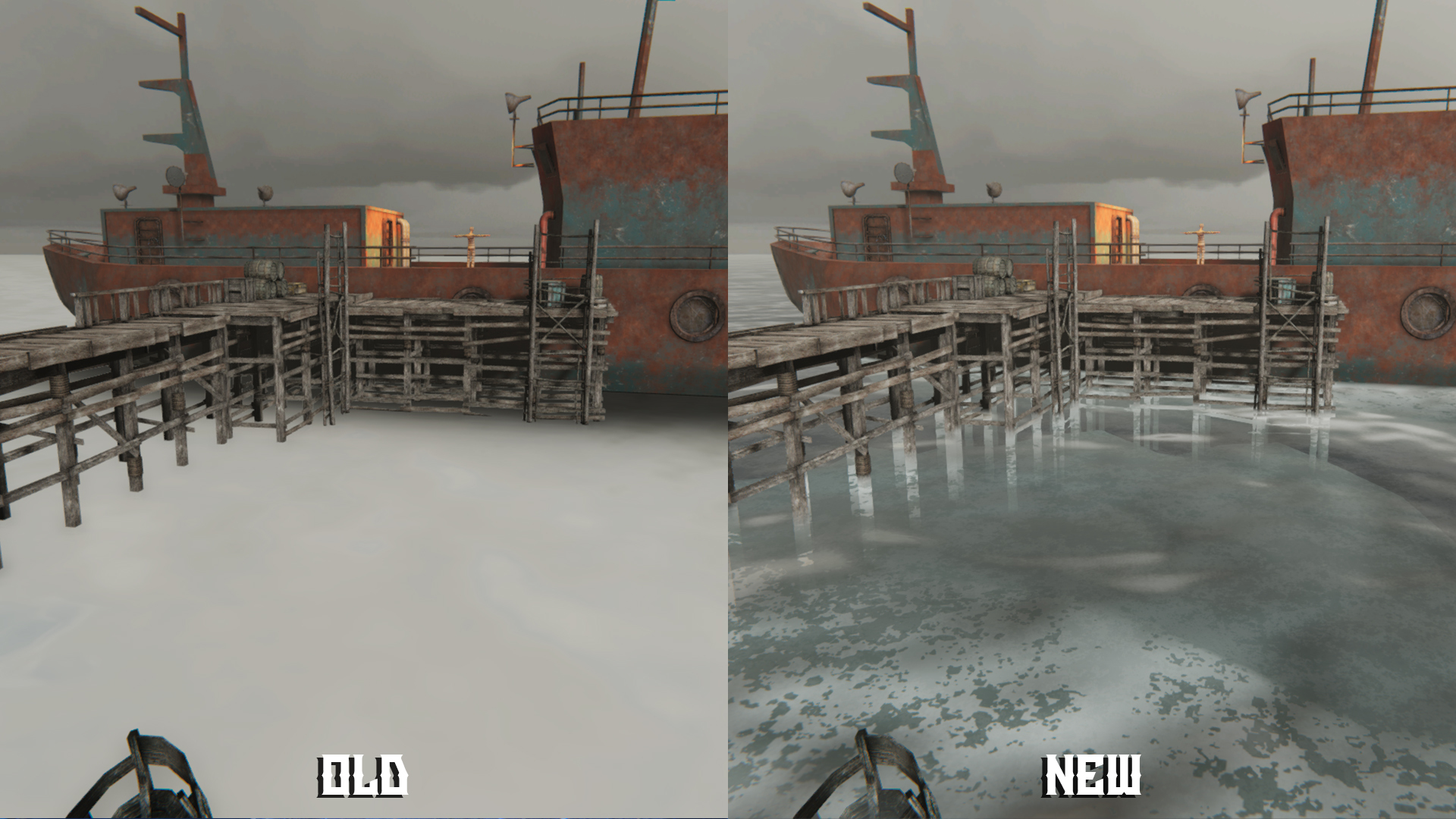 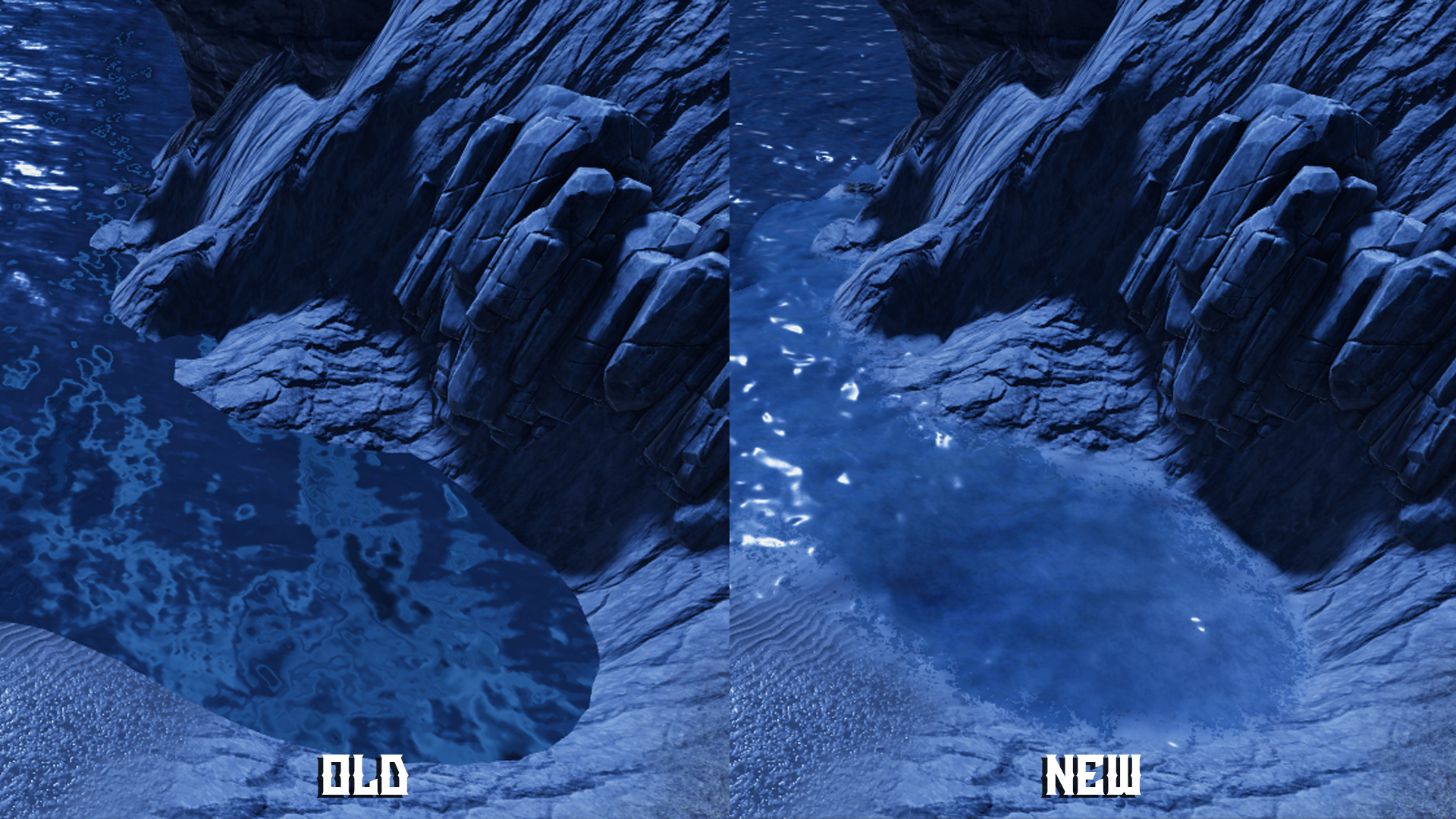 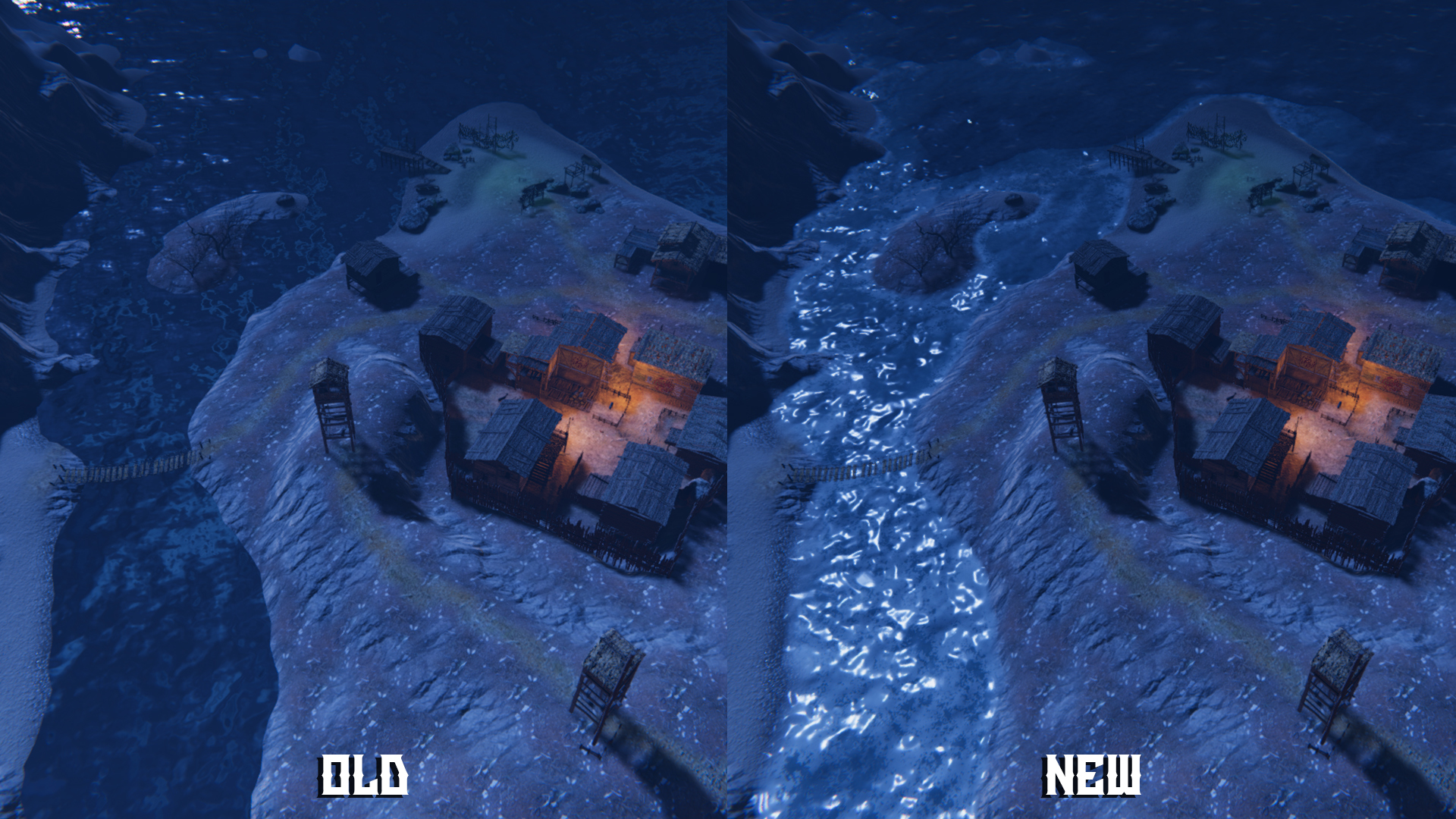 Up until now we just used Unity's standard shader for the water in Tainted Fate, which resulted in the ocean looking like a bumpy piece of hard plastic.
We're now using a better shader with transparency when you're near, foam on the edges where the water collides with terrain and objects, nicer colors, more believable waves and light reflection.

New background vistas on many levels 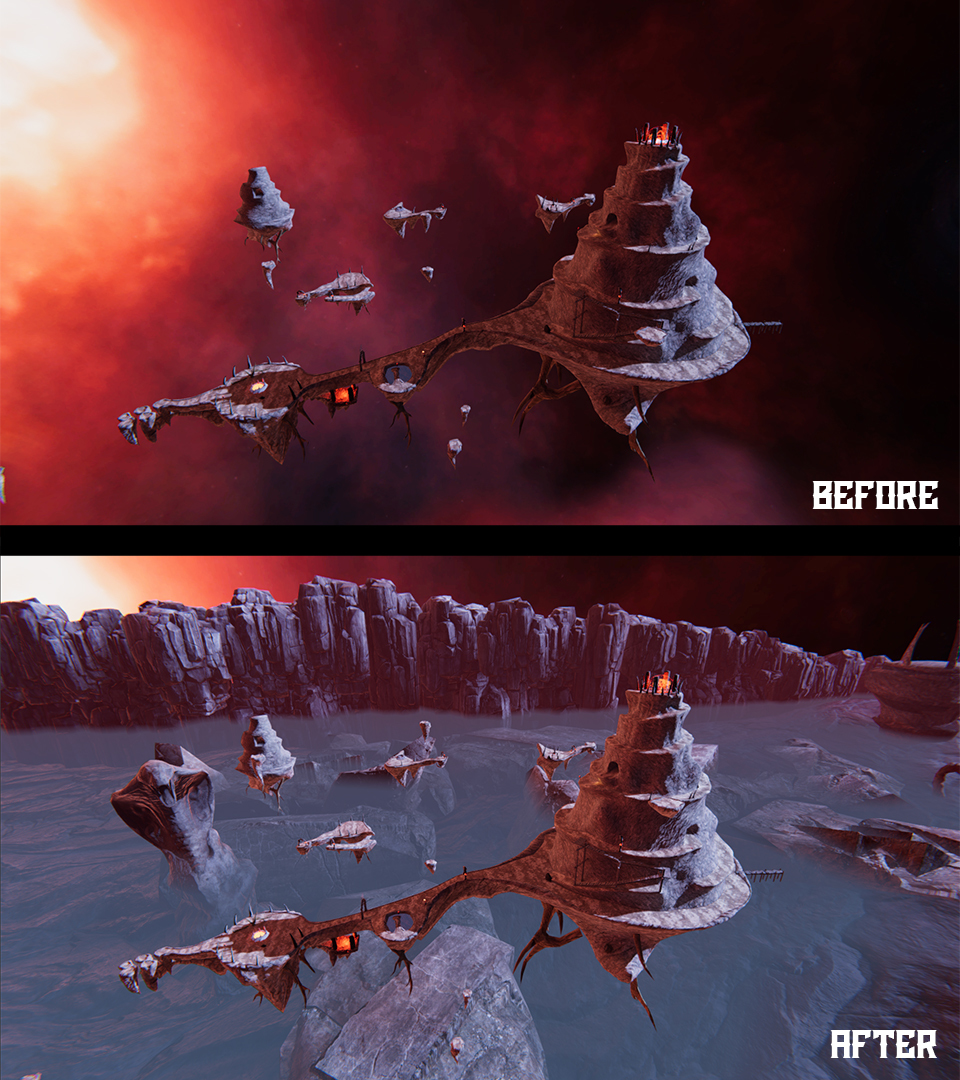 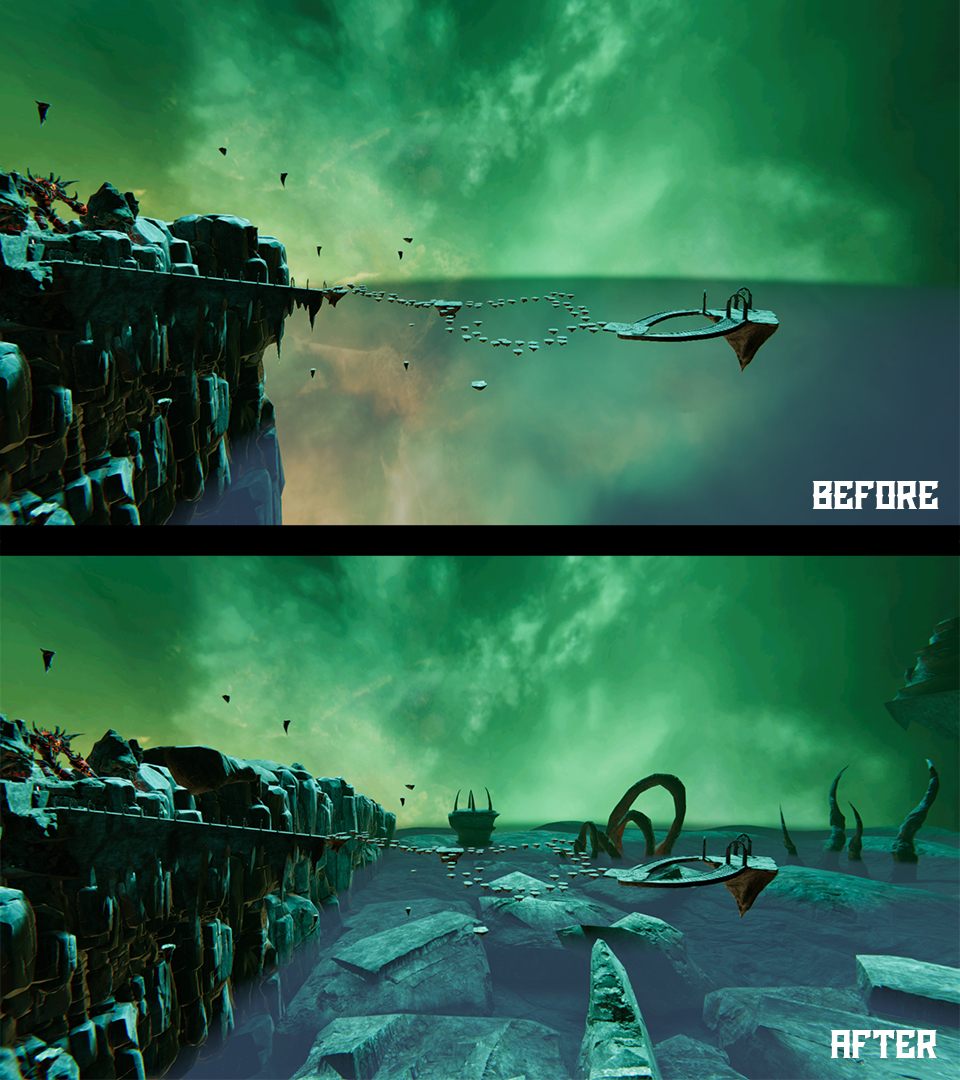 In VR one of the most visually stunning things you can see is environments stretching far out into the distance. While the island in tainted fate has some locations where the vistas are impressive, the hell levels were all just floating islands with not much around them. That has bothered us for a long time and we decided the hell levels need environments around them to feel like a real place and not a video game level made only for the sake of gameplay.
(we added this in the previous update and forgot to mention it because we're kinda slow!) 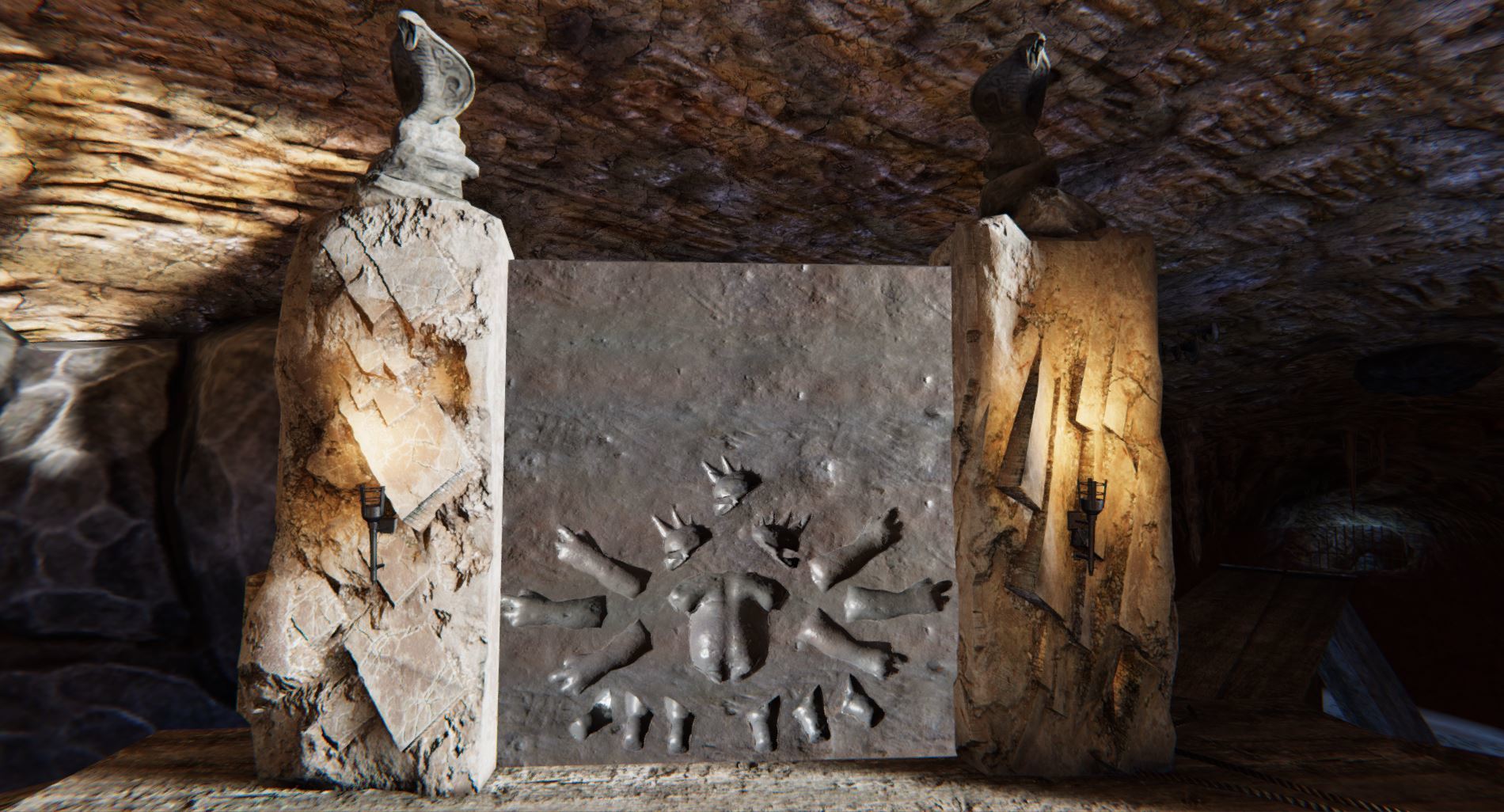 Dismemberment Gates are Tainted Fate's new gameplay feature to make the dismemberment system have more use than just making enemies die. The player must tear apart enemies and put torn off body parts into their corresponding holes in the Gates. When all the body parts have been set the gates open and allow the player to continue. We have a few different gates; some require just one enemy to be torn apart, some require a whole group of different enemy types to be slaughtered and ripped apart and placed into the Gates.
Expect to find dismemberment gates throughout the story campaign.

New ways to dismember (on the road towards Dismemberment System 3.0) 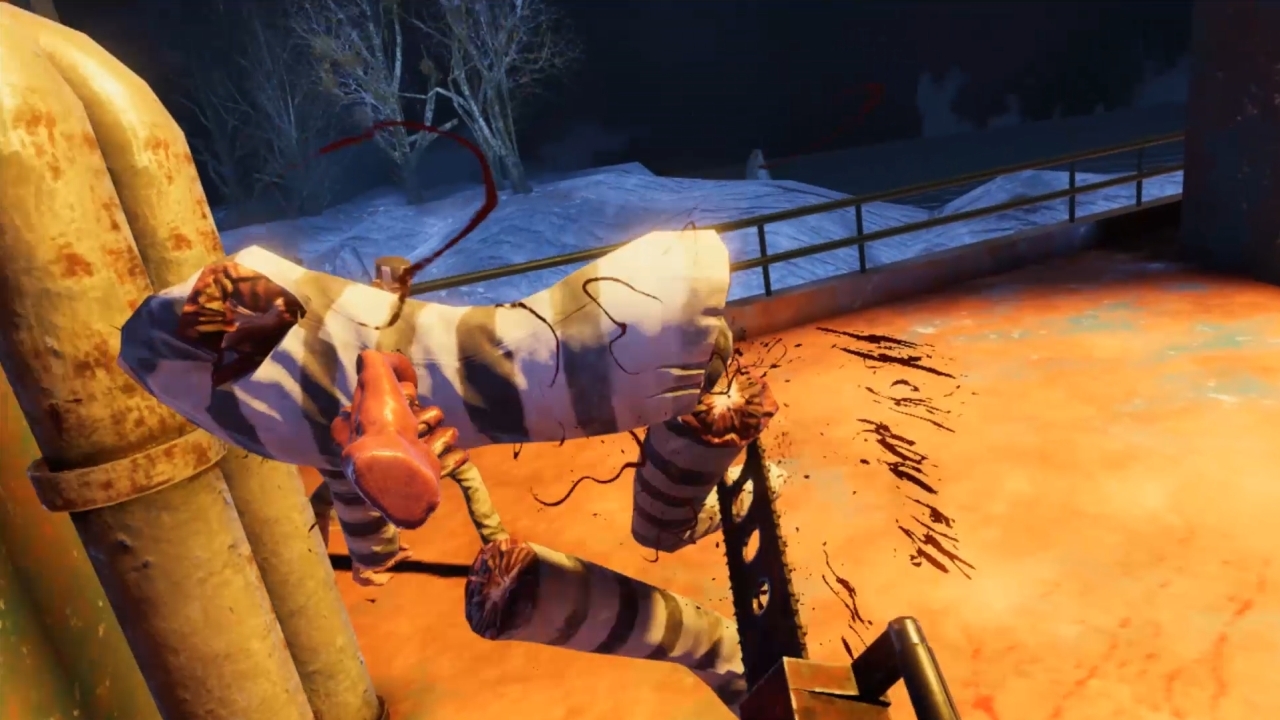 Surprise! As promised, we've started adding new ways to dismember. The first one of these is cutting off body parts with sharp objects. If you happen to find an axe, or maybe a shovel, or if you're really lucky, a chainsaw - you can cut off enemy's body parts with it and feel like a slasher horror villain. Throw an axe at an enemy's head to split it open. Or grab him and start cutting away. Or place the axe on a table and throw an enemy on it like a real surgeon would. Sweep an enemy off his feet with a chainsaw like in the best romance novels. Hold a chainsaw in front of you and wait for enemies to run into it because the AI sucks. The choice is yours. 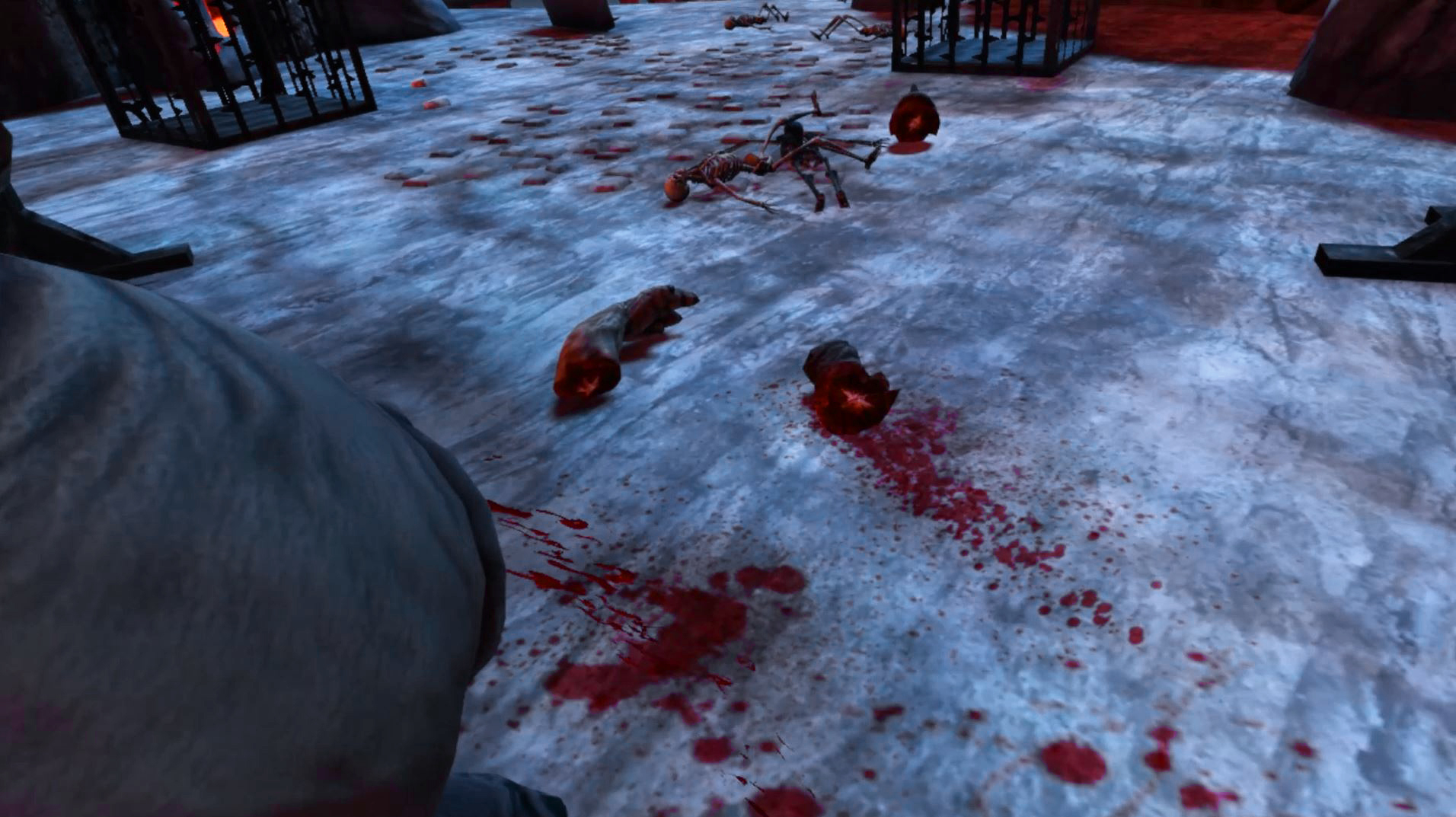 We've added blood stains that spray on the surface where you tear an enemy's limb. If you throw a body part with enough force into a surface it also creates a stain at the contact location. Thrown organs create pools of blood also. This makes fights more bloody and turns fight areas into blood soaked battlefields. Look back onto a fight area after a particularly hard battle and enjoy the bloody trail you left behind.

Many materials turned into PBR

Although Tainted Fate mostly uses physics based rendering (a modern approach to textures and materials which makes them more believable) on its materials, some of the materials use textures that were designed for the old (diffuse+normal+specular) system of shading. We've adjusted many materials and textures to make use of true PBR rendering, which results in the game looking a lot more coherent.

The level of detail (LOD) is the way our game reduces the complexity of objects based on how far they are to the player's view. This was set to quite near so objects would pop in or change shape suddenly while you were walking through levels. We have increased the distance at which objects change complexity so you can now see objects from further away and there is drastically less pop-in.

In addition to being able to see objects from further away, the transition between the different LOD stages is now smooth like in modern AAA games. Objects now fade into view instead of popping into view and you can barely see them changing from low poly versions into higher poly versions because of the smooth transitions.

02HellJobAdditional:
After the first level there is now a level introducing the dismemberment gate gameplay feature. You get to see some hellish sculptures on the way. 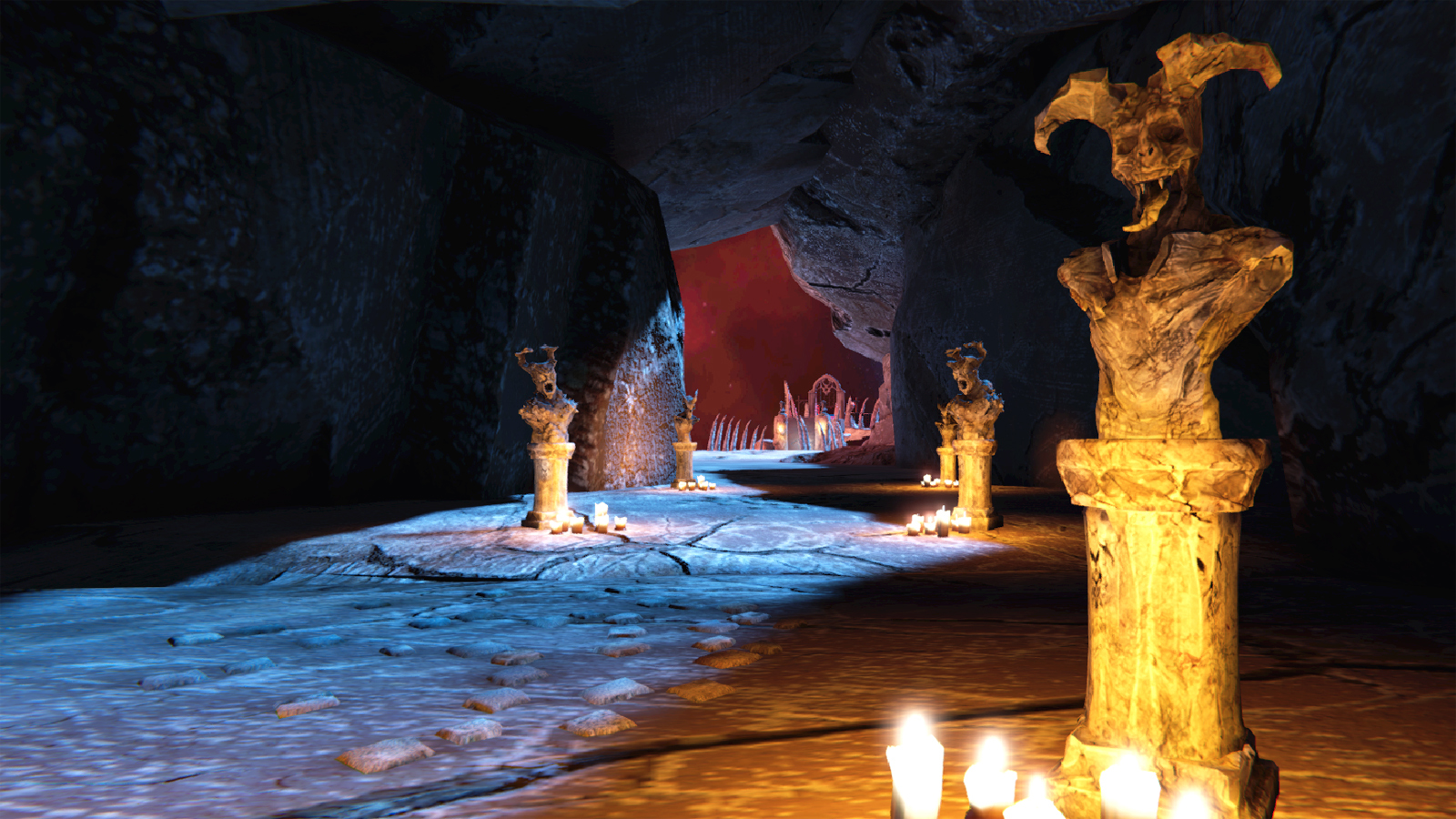 11CatacombsAdditonal: There is a new catacombs level that starts after you finish the old catacombs level. In this one there is a giant cavern with a dismemberment gate in the middle. 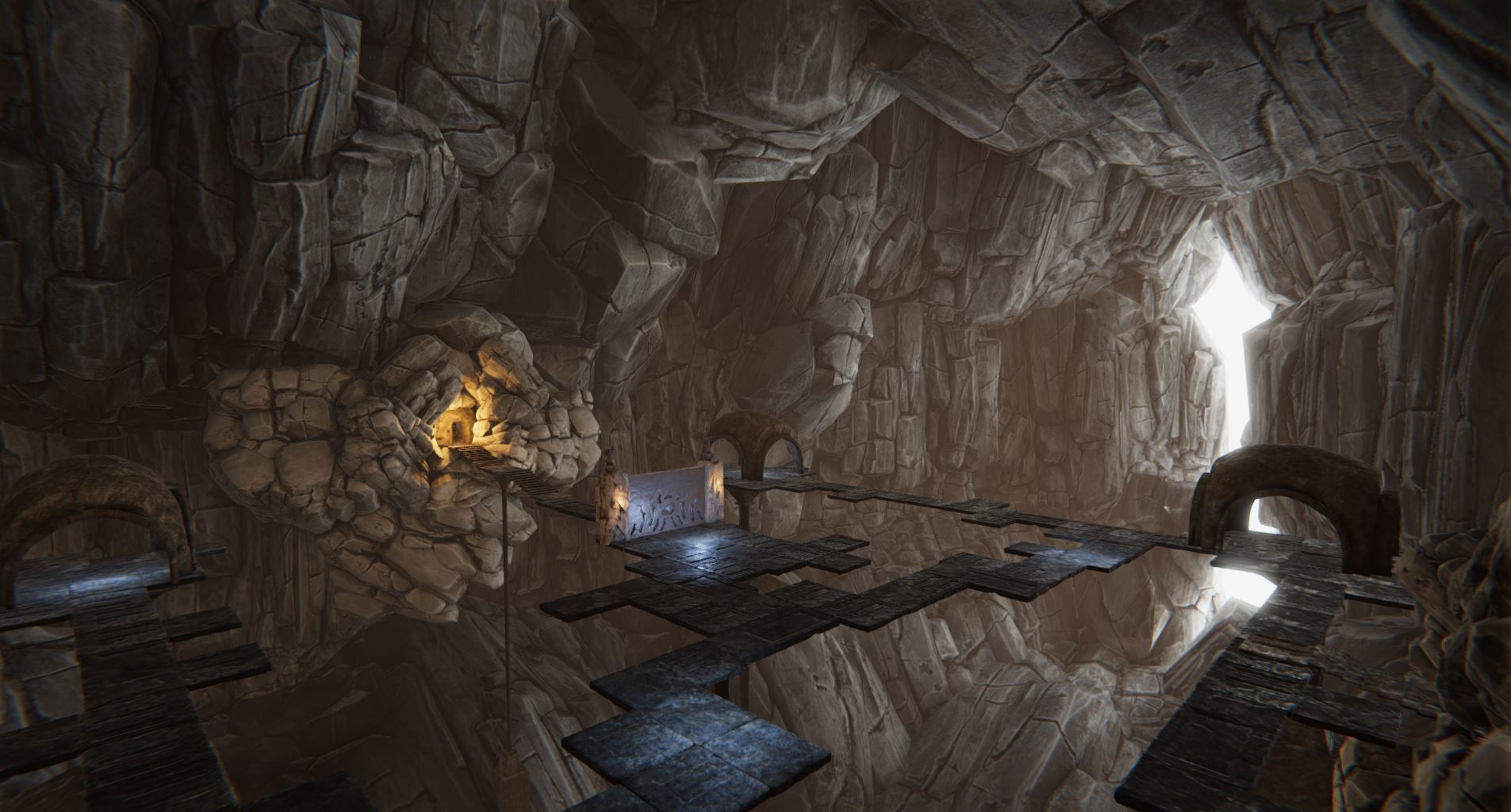 19BossIntro: There is now a final boss intro level where Baal throws his giant flaming balls at you while you jump from platform to platform trying not to get killed by Ball's balls. His balls hurt. They're not blue tho. They are, in fact, orange. (this level was introduced in the previous Puzzles Galore Update but we forgot to mention it!)

all textures doubled in size (new low, med, high texture setting)
- new water shader added on all levels
- background vistas for scenes MainMenu, 01helljob, 17HellParty, 18TwistedDimension, 19BossIntro and 20FinalFight
- changed lots of textures from diffuse+normal+specular to albedo+normal+metallic+smooth+AO
- changed LOD settings on all objects
- most objects now use shader with smooth LOD transitions
- added spawn effects for priests in catacombs and village
- more checkpoints in prison island and shipwreck (so you don't have to replay puzzle if you die after it)
- more checkpoints on just about every level
- reworked 12Woods atmosphere (every tester said the graphics on that level sucked. It was so ugly to some, they thought there was a bug with the lighting)
- new decorative objects on levels
- changed opening scene to have more interesting environment
- many textures changed to better fit into their environment
- added dismember gates gameplay feature
- reworked and prolonged first level into two levels to accommodate Spiky dismember gate
- reworked fight in cave after boss to have a Spiky x2 dismember gate
- added new catacombs level with Doggo dismember gate
- added mixed giant epic dismember gate in level 17HellParty instead of lame fight at end of level
- put stairs at end of 16Island4 instead of jumping on rocks - not confusing where you need to go anymore
- added new level - Boss Fight Intro
- level exits that are pure white now have a fade so it looks more pleasing
- bottles now break when thrown
- wine bottles have new label (this is the change you have been waiting for all your life)
- "water" in final boss's stomach has a green haze now
- fixed number one (1) in main font so it doesn't look like a seven (7) - confused people in high scores
- more blood decals on levels
- when final boss hurts you it plays hurt sound instead of eat sound
- more dynamic objects in house level
- set up light probes on multiple levels so dynamic models are affected by baked lights
- Oculus Rift only bugfix: tunneling (vignetting) now works in free walk mode
- Oculus Rift only bugfix: after you start holding a body part vibration stops (before it would vibrate a second longer)
- no more delay between explosion and reaction in puzzles
- no more delay between enemy spawn effect and enemy actually spawning
- enemies now go into ragdoll when they die from natural causes (not killed by player, killed by minion or environment)
- if a headset is not detected, instead of looping an error message 90 times per second, the game tells you there was no headset detected
- blood now sprays on floor and stays there when you tear an enemy
- torn parts also leave a blood stain if thrown with enough force
- organs spray blood on the floor if thrown with enough force
- axe, rasp, shovel and chainsaw now dismember limbs of thrown with enough force
- axe, rasp, shovel and chainsaw while held in hand can now be used to chop up enemies
- final boss fight reworked - 50% on the road to greatness
- fixed lighthouse light rotation bug
- Locked doors have handles that can be moved now
- Cupboards, electric boxes and other small objects with doors on them can be opened
- chainsaw now usable - chain rotates when picked up and can cut up enemies until fuel runs out
- player can't walk through green rocks anymore
- temporarily removed ambient occlusion from options (we'll bring it back when we fix all bugs with shaders)
- goat heads and brains don't spin indefinitely anymore
- changed sharp object placement on levels for more fun!
- enemies that die from natural causes (killed by other enemies or minions or env hazards) now go into ragdoll instead of staying in last animation frame
- plugged a lot of holes where you sneaky speedrunny bois would skip portions of levels or softlock the game

That's not everything, but it's everything we have written down! We hope you look forward to the next update in which our main priority is to overhaul the audio side of the game to be more meaty and polished. In addition to that we will polish the tearing system to be more responsive and remove some bugs we found with cutting with sharp objects. We'll also add tons of new sounds and ambient music and continue the Dismemberment System to be more versatile. Thank you for playing Tainted Fate. We <3 u.