It's got new models: player and some weapons. Go take a look!

Previous months I tried all sorts of things, trying to find some good graphics style that I'm interested in doing, trying sprites, trying programming my own engine... then I was quite bored for some time, and finally I checked some old models that I made when I first started modeling. And there I found that style I was looking for. A style that looks good and is simple enough to do.

This is the Player Character. The white parts could have different colors in netgames. Haven't thought the other colors yet, but probably some red, green and blue. The character model is slightly adjusted from what it is in this picture. It doesn't have animations yet. 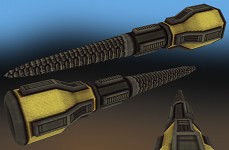 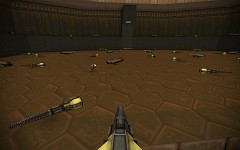 This is a Drill Fist. It is your melee weapon. It will do lots of damage really fast, but against large groups you'll need something with a longer range. While you're drilling one enemy, the others are probably chewing your back. 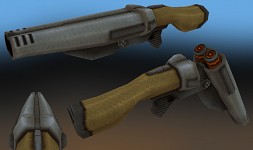 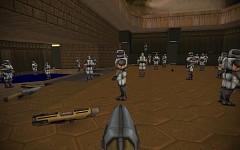 This is a Shotgun. It's got a bit more range than the Drill Fist and can hit multiple targets at once. In some sense it is also a melee weapon. 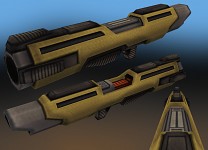 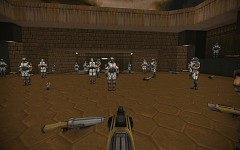 This is a Rocket Launcher. At the moment it fires Fire Rockets at a semi fast rate. Don't try to use this in melee unless you want to explode yourself too. The ingame shot shows the model a bit too low, it has been raised higher, closer to how it looks in the model only picture.

My next things to do are to animate the player or to make more weapons. Plan is to make all the weapons with similar sizes and handle placements, so that they can all use the same animations, except that Drill Fist will need its own animations. I have thought to do level textures at 256x256 resolution to match the texture resolution in the models.

I think this stuff is here to stay. I've more or less tried all different styles to know which one I can do, like to do and like the results as well.

I don't intend this to be some Doom remake thing, but it is very likely that there are some similarities. I should have maybe had some new level textures already...

yeah man i have to say i like these assets the best out of all you have done. maybe the lizard guys could be good enemies though?

:) Probably they could be good enemies, but I don't want to shoot the lizard people... It/something similar might make a comeback as an alternative player model and sounds.

I have thought to recreate some of my old monster designs too. Some of them were pretty good.

Keep up the amazing work jimi!

hmm maybe you should offset the drill some if you can ?

Yea, I actually did.. well, I moved it back a bit, since it moves forward during the attack, and then it looked sort of small.

Not yet sure about having weapons on the sides, but if it's possible, it's extra... Centered will be default.