Starting this month, we will begin posting a monthly developer Q&A thread. We will be taking some of your recent ideas/issues/questions and we will try our best in addressing each of them. Check out the first developer Q&A here! 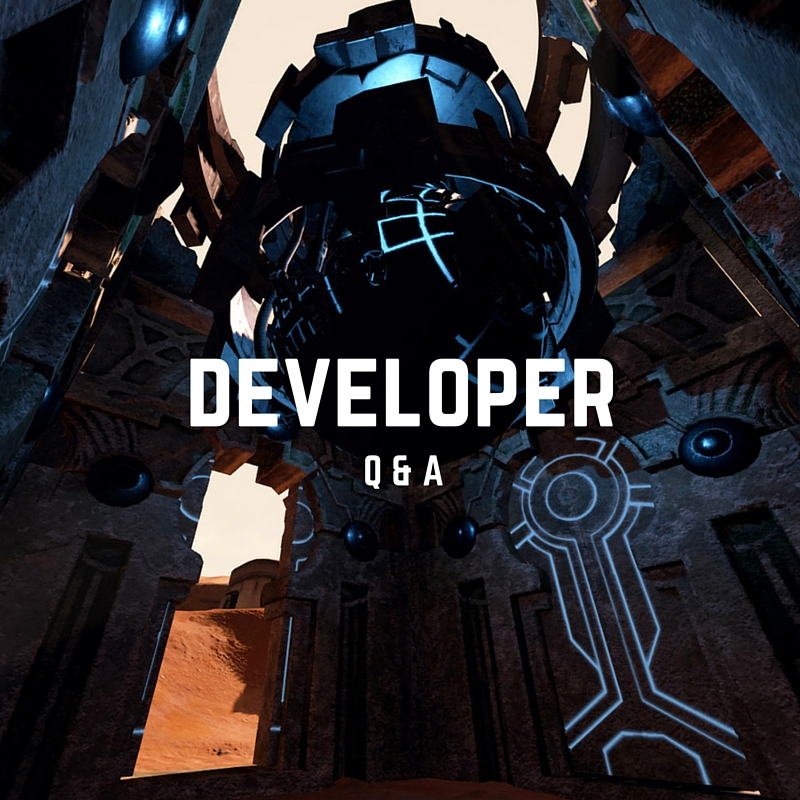 Starting this month, we will begin posting a monthly developer Q&A thread. We will be taking some of your recent ideas/issues/questions and we will try our best in addressing each of them. Without further ado, let's get started...

The distance in which jumping and running sounds from other players is too far. You can hear other players even when they are not even remotely close to you. Sounds should only be heard if the player is near you.
This is something we completely agree with and is an easy fix. We'll be reducing this sound distance so you only hear players when they are truly nearby.

Why was Energy consumed for jumping raised from 10 to 25?
The reason the Energy system was changed was ultimately to prevent bunny-hopping. It was also something that was requested by a number of players. Though players need to be more mindful when jumping, we still believe the system could use some additional tweaking. We are considering changing it so you replenish Energy slightly quicker and/or reducing the initial delay before you start replenishing. Moving forward, we'd love to hear more what you think regarding the current Energy system setup, however.

With the exception of load outs, there is currently nothing really that distinguishes one class from another. What plans are there for the future to address this particular issue?
Having unique class-specific abilities is already something we plan on developing and implementing in the near future. Eventually, there will also be special weapon abilities, each weapon with a different rarity. The higher the rarity, the more special the ability would be.

Switching from one weapon to another is too quick. It is too easy to snipe/rocket another player once and switch to your secondary for an easy kill.
We agree that weapon switching is currently too quick. This is a relatively easy fix, however we will need to be careful in tweaking this as we still want and need our current animations to be natural looking.

With the damage reduction of the Rocket Launcher and Grenade Launcher, the Shadow primary weapons are now too powerful. When faced with a Shadow at medium/long distance, you are dead, regardless of your class.
Damage for both the Rocket Launcher and Grenade Launcher was reduced due to the fact that you were able to one-shot players from a short distance. You could actually one-shot a player with the Rocket Launcher without even hitting the player. We felt this needed to be addressed, however additional weapon balances will follow. Moving forward, rather than nerfing, we will most likely buff/increase the damage of all other weapons to level the playing field against Shadow primaries. Along with slowing down weapon switching, this should help significantly. If not, additional measures will be taken.

Throwing animation for HMX and X-Gel grenades is too slow.
This is something that has been mentioned by a number of players and has not been ignored. We will try our best in quickening the throwing animation without making it look unnatural.

Coxis inflict 100% damage so they should be easier to spot. They can be difficult to find on maps with high grass like Frontside.
We plan on adding a small glow to the Coxi, making it easier to spot and find on the ground. Also, due to the Coxi inflicting 100% HP, we will most likely reduce the inventory quantity from 3 to 2 in a future update.

In Free for All, players are unable to distinguish their Coxis from enemy Coxis. Because everyone spawns red, all Coxis on the ground appear red. I hope there is a fix to this...
We plan on adding a small icon that will appear when you place a Coxi on the ground. This will prevent any confusion and will be something that will appear on all game modes, not just Free for All.

During team related game modes (Freeze Tag, Team Deathmatch, etc), players spawn right next to enemies.
This is a frustrating issue that we can completely understand. Fortunately, we do have a solution for this problem. Once fixed, you will spawn next to your teammates instead.

There is not enough warning when picking up a flag. Simply, I have no idea when I have picked up the enemy's flag.
There are currently two signals when you pick up a flag: a short audio clip and a white flag logo appearing on the left side of your screen. However, we do agree that additional warnings/notifications should be included. We hope to add this in an update soon.

The low HP blur is annoying and it makes me dizzy!
Instead of being a permanent effect, we will change the low HP blur so it is only temporary. It will simply last for a couple of seconds and then go away.

Nearly all the weapons currently have huge inaccuracy...
We plan on taking a look at every weapon and tweaking their accuracy accordingly. This will take time, however particular changes or edits to weapons will be announced in the patch notes for future updates.

Have a question? Feel free to leave it here or pick up the conversation on Steam and we’ll try to add it to the next developer Q&A thread. As always, thank you for all the ideas and suggestions.