Since the last dev blog there have been numerous new changes, additions and fixes. The major ones include the rain mechanic and the reintroduction of traveling merchants.

Sorry for the lack of updates recently. Between exams and the various game jams we've been doing I haven't had much time to work on Crawle. Hopefully that should change.

Since the last dev blog there have been numerous new changes, additions and fixes. The major ones include the rain mechanic and the reintroduction of traveling merchants.

Firstly, rain is a new weather mechanic with both negatives and positives. Positives include reducing the rate of thirst loss and increasing the rate at which crops grow. Negatives include the fact that rain puts out fires and can reduce your body temperature. 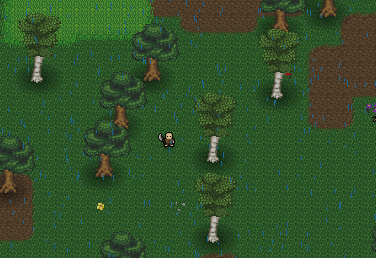 Next, we've reintroduced the travelling merchant. During the early days you could trade with a randomly-spawning merchant. We've now reintroduced him and he now behaves much like a villager does except that he isn't afraid to move around a bit more and has slightly better items.

We've also implemented a slightly new system for woodcutting. Previously all axes would do the same damage, however the new system allows different axes to do different amounts of damage (and accounts for dual wielding too), e.g. a Raider's Handaxe will do more damage to the tree than a Crude Tool.

Finally we've reduced the amount of rocks, branches, fruitbushes, animals and chests for unforgiving worlds to make survival in those worlds slightly more challenging than before.

Join our forums at Sleepystudios.com to stay up to date with all the latest discussions.

I like whats going on but I have to say the game does feel somewhat unbalanced to me, there seems to be more things that what you dead the things that will actually help you, not sure if this is because I can't find a village or a dungeon yet... they don't even seem to spawn for me :(

That's just the nature of the game. It isn't meant to be easy. However, a lot of things have positive and negatives effects on you like rain for example.

Hey there, I'm considering buying Crawle but I was wondering if a zoom option has been implemented? I tried the demo and I liked it but I just felt the view was far too zoomed out (I guess the majority do appreciate it though, since it's not been changed from what I see), but resolution change never helped and, on a computer where I run everything at 1920x1080, it would be great, and the final incentive for me to buy Crawle, if there was levels of zoom of some kind :)

If you don't like the graphics enough to not buy it, don't buy it. The graphics are the way they are for a reason, sorry.

What Relly meant to say is that the (horrible) programming language Crawle uses has memory constraints. The smaller graphics helps with that. I've tried doing it before but frankly it'd be better to re-write the game. I realise it's a pretty poor alternative but there are magnifying programs such as Windows Magnifier and other 3rd party programs.