Crawle is a sandbox dungeon crawler with a focus on realistic survival using mechanics such as hunger, thirst, diseases and wilderness survival such as creating your own tools, skinning animals for meat and fur and using the resources around you to stay alive.

- An in-depth survival system based on hunger, thirst, sanity and energy.
- Dungeons that can be looted for gems, armour and weapons.
- Many difficulty options including an option to turn off the interface altogether.
- Health is based off your blood content and the damage to your body parts. You can also bleed out.
- Animals do not despawn, instead they can be skinned, picked up and taken to your house or just left to rot.

You can find a variety of screenshots (from new to ancient) on our IndieDB images page.

The big release patch is finally done. The most significant changes in this patch is the new seasons system, the ability to finally craft the Rusted Armour and all of the massive bug fixes for multiplayer (which finally allow you to do combat with animals).

The full changelog for this release is available here. It's a bit too long to post here unfortunately but the major highlights are below. 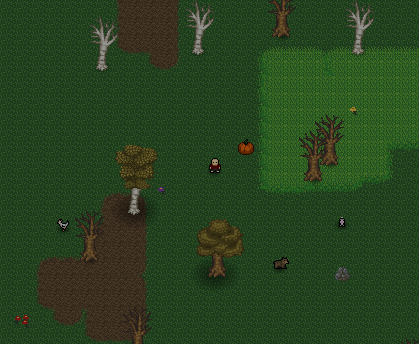 A new seasons system has been added. This system will include all four seasons and will have season-specific effects on both your world and your character. In winter, the days are shorter, trees die faster and your temperature goes down a lot faster. During spring time there's an increased chance of rain meaning faster crop growth among other things. Throughout summer you'll experience longer days and your temperature will go up a lot faster. Finally during autumn trees will begin to die and pumpkins will begin to grow. 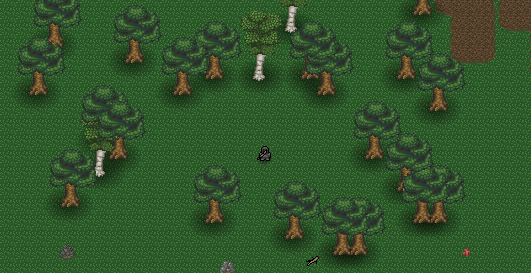 Another massive addition is the ability to finally put together the Rusted Armour and Rusted Blade. These were added in both 0.6.0 as rare chest drops. Now, you can craft them by dragging one of the required pieces onto an anvil. If you have the other pieces (the other two in the case of the blade and the other three in the case of the armour) then the item will be crafted.

But that's not all! There's loads of major bug fixes for multiplayer and singleplayer too (with a focus on multiplayer though). The result of these fixes are a much better multiplayer experience as well as the ability to finally do combat with animals and other NPCs.

Thanks for all the support throughout the development process. Crawle was our first commercial project and we feel like we've learned a lot about pretty much everything over the two years we've been working on it. We hope you all enjoy this release!

Crawle 1.0.0 is done! Game will be on sale until Tuesday

Crawle 1.0.0 is finally finished! We'll be releasing the patch on Tuesday. To celebrate, the game will be on sale for 50% off until Tuesday.

In short, the patch is almost ready! The main stuff is all ready - the seasons system is working in both singleplayer and multiplayer and you can now...

A summary of the plans for the release patch: a new seasons system, world customisation options and the ability to finally craft the Rusted Blade/Armour.

The main focus of 0.9.0 was two new features. The new temperature system along with the new Quivers system. There's also a few quality-of-life changes...

A demo build of Crawle. This demo allows you to play singleplayer for 20 minutes per world (a whole Crawle day). You can purchase the full game on our...

Another massive nightly! Most of the changes are to help new players including a tutorial world, a more in-depth tutorial and for the hardcore players...

Farming has been added into the game along with new ambient music and sounds and death menus and durability.

Today is Crawle's first birthday! This build includes a new menu system, a way to stop bleeding and seeds!

Nightly 6 is out! It completely revamps the dungeon system and makes it room based. It also adds the ability to craft fishing rods and makes the game...

Crafting is finally here! You can now craft your first tool and actually progress through the game a bit more. We've also added key rebinding.

Well it seems this game is dead, it is really bad, i liked it.

It's not dead, it's just finished!

and the game will be released in Steam? If it comes when?

Probably not. I don't think Crawle will be popular enough to be able to get past Greenlight.

This game can probably make it through steam, I would greenlight it(I have only played the demo), just needs some work.

I really appreciate the thought but another x thousand people would also need to vote and I don't really think that's realistic.

The greenlight submission fee is $100, which you probably already made, there is nothing wrong with trying. Even if the game failed, the money you paid is already sent to a Child's Play, which is a pretty positive thing.

Oh a question is it inf world?
Can i build a home?
Is there wiki?

No
Yes
There is one, but it's unmaintained.

Actually. I'm gonna try to work on it today, here's the wiki: Crawle.wikia.com

I did think you stopped working on it but great that your still working on it!
I bought this really like it at the moment!
How do I farm?
Also inf worlds would be really cool!
What happens if I run out of rocks on the ground?

I really like the game at the moment goodluck!

Firstly you want to find some tall grass, get near it, right-click it and select "Search". That'll give you various seeds.

Next, walk into some dirt. Right-click the seeds in your inventory and select "Plant". It'll take a while. If your dirt is near water it'll speed it up. Also if you have ash you can fertilise the dirt by right-clicking it.

Awesome!
So what about homes?

Get logs. When you have at least 4, right-click one of them and select "Use as Landmark". Then, right-click the landmark and select the first option. From there all you need to do is drag and drop logs and leaves onto it until you get a full hut.

Oh if you can please keep updating this i really want to see more features!

Working on the next patch as we speak.