Stellar Sovereigns V0.86 update is live, introducing the third Menace faction the Machine-AI, a set of 9 technologies that can be salvaged from their wreckages, reworked salvage system and finally the integration of player portraits.

Stellar Sovereigns V0.86 update is live, introducing the third Menace faction the Machine-AI, a set of 9 technologies that can be salvaged from their wreckages, reworked salvage system and finally the integration of player portraits.

This new menace is a highly advanced adversary, with powerful shields and an assortment of defensive technologies as well as an effective array of offensive capabilities. They appeared recently in orbit of black whole systems, constructed their base over the event horizon harnessing its power and building they vessels from the matter caught in the orbit of the singularity.

To what are they up to is unknown, every attempt of contact ended in disaster with mass casualties and loss of assets. They seam to be contempt orbiting they bases but also observed to send out fleets seemingly randomly in all direction as if they were searching for something amongst the stars.

In the event that the player manages to destroy Machine-AI vessels, the following technologies can be salvaged from their wreckages.

These modules bring some new modifiers like the Expert System's Subsystem Power Use reduces the the power requirement of engine, sensor, shield and ECM systems, while the Positronic AI Core's Total Power Use reduces the power drain of every weapon, module and subsystems. The Antimatter reactor on the other hand just simply doubles the output of the vessels reactor. :) 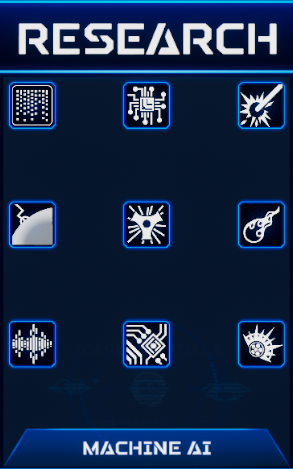 There are also three new ability modules, the Deflector, Interference Matrix and the AI Virus upload.

The Deflector is an impenetrable frontal facing force field that blocks incoming weapon fire while allows the vessel to fire through.

This is an ability that infects the target vessel with a computer virus that takes control off its weapon system turning them against the closest friendly vessel as long as the upload link is maintained, which has a limited range and duration.

This update brings changes to how the process of salvaging works as well as how wreckages are spawned.

Previously a wreckage was spawned after each battle combining the resources and technologies into a sum total and it had been salvaged as one with only one chance for tech salvage.

The reworked system creates a list of each vessels destroyed in a battle denoting each of their resources and technologies separately, so when it comes to salvage each salvage capable vessel in orbit of the wreckage will salvage the resources and potentially the a technology of one vessel per turn, making the salvage process take longer but potently be more lucrative.

Since each vessel's wreckage decays over time, reducing salvage resource amount as well as tech salvage chance, salvage always happens in the order of oldest wreckages.

You may use multiple vessels to speed up salvage.

The Face of Things to come

In preparation of the upcoming Diplomatic features I added the player portraits into the game. These portraits have been sitting on my hard drive for a while now but I just never had the time to integrate them into the game.

Since the upcoming features which will eventually make up Stellar Sovereigns' Diplomatic system will make use of these portraits I decided that it is wise to make them ready in advance.

I always loved the portraits of Sword of the Stars and I have hoped to have a similar set of diverse portraits of alien and humanoid beings. Luckily I had come across two talented artists' assets that fit my expectations and I hope that you guys will like them as much as I do. 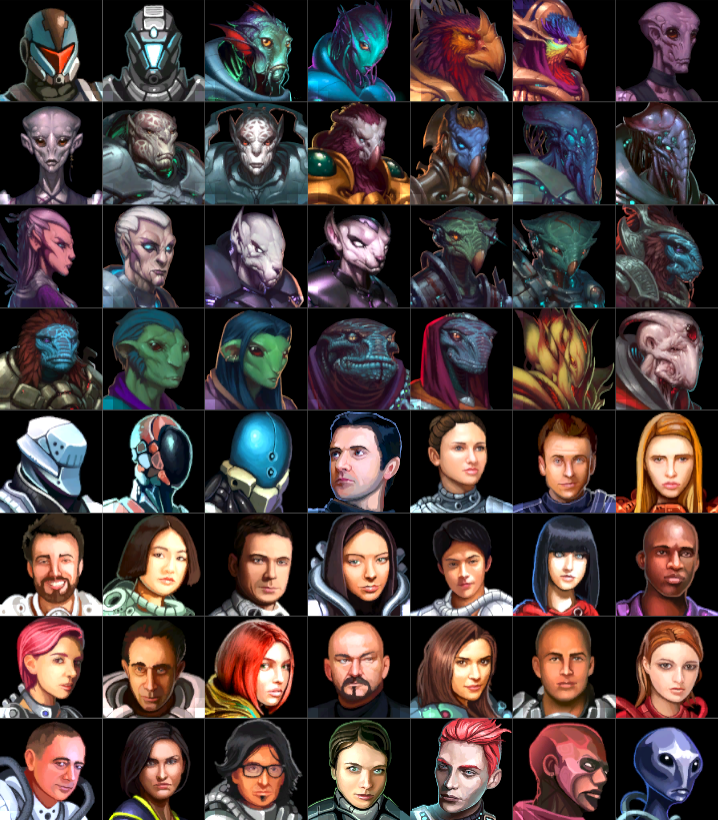 For now I get back to working on the Commercial Trade feature that will be the bases of Trade Agreements for the Diplomatic System of Stellar Sovereigns.

Do not forget your feedback and suggestions are
welcome in all things and things to come!