Posted by UltimaRatioRegum on Aug 30th, 2015

This week I’ve implemented almost all the “stationary” NPCs. To explain what I mean by this, URR has three “tiers” of NPC: the crowd, the stationary, and the crucial. Crowd NPCs spawn and despawn as the player moves around the world map and are of importance insofar as they demonstrate the demographics of the nation, and you will be able to acquire significant information about the generality of the nation/religion/culture they belong to from them, and they serve also, when in crowds, to illustrate something of that nation’s ideologies (so you’ll only see a crowd with a bunch of people trailing a priest in quite a religious nation, for instance). Stationary NPCs are positioned in locations where there must always be an NPC serving a certain function, but the individual is not of particular important. Examples would be priests in religious buildings, jailers in prisons, innkeeps, guards, and many others. In some cases these individuals will “change” around after time – guards, for example, will be “met” by another guard at a certain point who will then take over the guarding role, i.e. they change shifts – whilst others, like priests, will obviously not change every few hours. Crucial NPCs, meanwhile, are those NPCs who are of sufficient importance to the game and the world that regardless of where the player is, the actions and movements of these NPCs will always be tracked. This category is primarily for NPCs like rulers, religious leaders, inquisitors, heretical leaders, nobles, military officers, and the like. Also, very rarely, what appears to be a stationary NPC will actually be a crucial NPC. Which is to say: in a jail, maybe 95% of the prisoners will be “general” prisoners, but a tiny number might have massive global significance due to their past role in a grand plot, and one wouldn’t know which was which until uncovering a path of clues which lead you to the important prisoner. Ninety-nine out of every hundred priests might be good loyal clerics… but perhaps one in a hundred hides an religious artefact of immense importance in their private quarters?

So, this week it has been the turn of all the stationary NPCs. Here are some examples:

Priests now spawn in religious buildings and cathedrals. In religious buildings, the priest lives on the top floor and will return there in the evenings; in cathedrals they have distinct rooms on the ground floor to which they will retreat as and when appropriate. For the time being, however, they just spend their time around the ground floor of the cathedral interacting with the worshipers, going about their own worship, etc. There is actually a tiny bug in the below gif – the priest was standing on the same tile at the altar, when they should be standing next to the altar – but I’ve since fixed that, but I otherwise rather liked this gif so decided to stick with it.

Embassies now have clerks and diplomats in them; the clerks are probably going to be “general” NPCs in the embassy crowd, whilst I think diplomats will be assigned to specific areas. The ambassadors for each nation in other nations will be crucial NPCs who will always be tracked separately, so they haven’t been coded just yet.

Servants/slaves (depending on whether the nation is a slaving nation or not) now spawn and go about their business sensibly in upper-class houses. The houses will also, of course, get visitors in the form of various aristos from time to time, and then later, we’ll get working on the “crucial” NPCs – i.e. the family who lives there – generating properly. Thus, for now, here’s an example of some servants and some general citizens. You’ll note the servants will always stand next to something, either next to a person to serve them, or next to a chair/table/whatever in order to keep it clean and tidy. They’ll sometimes return to their quarters in the basement, and once I get schedules working, they’ll obviously retire there at night.

In jails (in nations with the Penitentiary ideology) we can now find prisoners in the cells, one prisoner per bed, milling around. As mentioned above, a small number might be someone of particular importance, but it’ll be up to the player to decipher who (if anyone) that might be. Prisoners will also be on release schedules (or at least, the lucky ones will be!) so they’ll be replaced whenever one moves out. I might add some kind of system whereby the different floors of each jail are for different types of prisoner – I’ll think about that going forward. 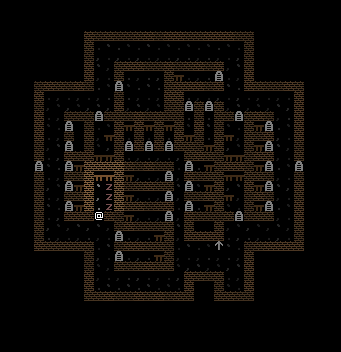 Below the cathedrals of theocratic nations you’ll find a crypt… and if you explore that crypt, you might come across a room containing the most secret archives of that religion. Right now these are tables without books, as we don’t have book generation yet, but we do now have the archivist, and their guard(s), spawning. Here’s a gif of me finding an archivist in a half-flooded crypt in a city next to the ocean, and then having a look at the archivist, and looking at his religious garment (which you’ll note has grey patterning – as well as “default” robes and the “religious leader” robes with gold patterning I showed last week, I’ve added in a mid-tier version with grey patterning which will be given to people like archivists, abbots, inquisitors etc, who are higher-ranked than the average priest but not the leader(s) of the entire religion). The “Archivist” is depicted with a ‘V’, and the ‘g’s are of course the guards:

Once books are generating, archivists will be guarding the most important secrets of their religion, so the books behind them will be immensely important to find a way to read…

Guards have also been added to several other areas which need them, such as Officers’ Quarters, and Mansions, and various other places, and the guards for now all shout the “Oy, shop that!” placeholder (along with their x/y coordinates) once you walk into their territory: 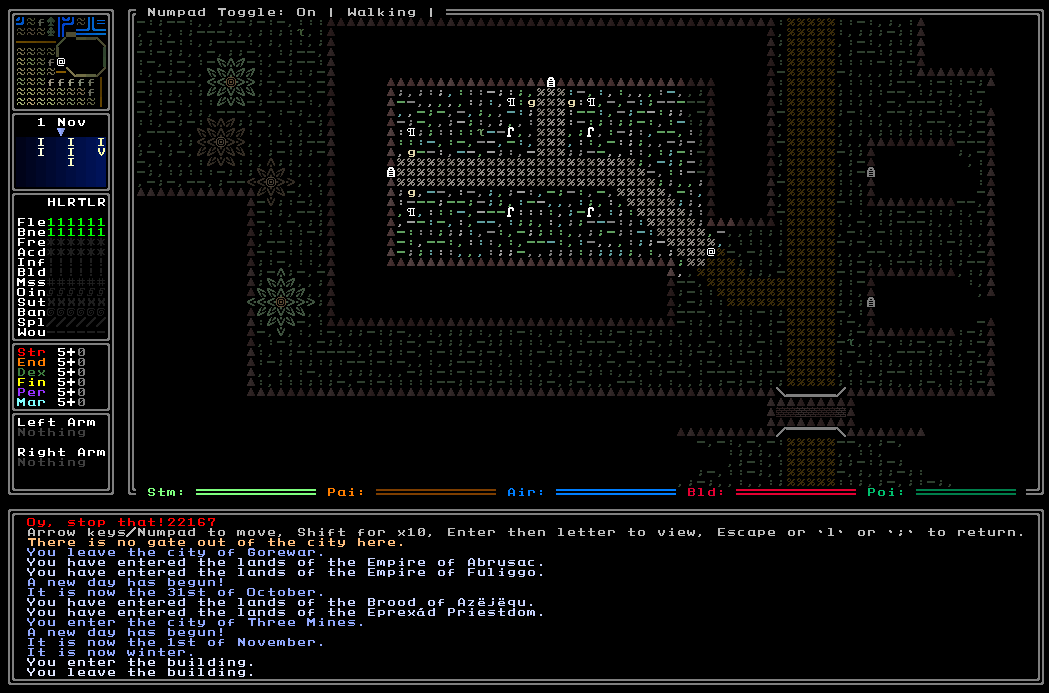 I’ve now temporarily (or permanently, we’ll see) removed the “Cultism” religious ideology and replaced it with, for the time being, the far more interesting “Monastic” option, and as such, we now have monasteries spawning. These are structured in the form of a religious building in the middle, a range of paths and vegetable gardens around it, a “loop” of monastic housing in a shape based on the civilization’s spatial preference, with several other important rooms (libraries, dining halls, abbot’s quarters, etc) spaced around the outside (or sometimes the inside). As examples, here we have a map grid containing a monastery (diamond), then the player standing outside one (cross), then inside from the player’s perspective (square) and an absolute perspective in the same monastery (circular) – note of course that all the wall in middle and edges of the fourth picture is not actually wall, since outside the monastery is where the vegetable garden is, but all the spare space in an “interior” map is just filled in with wall: 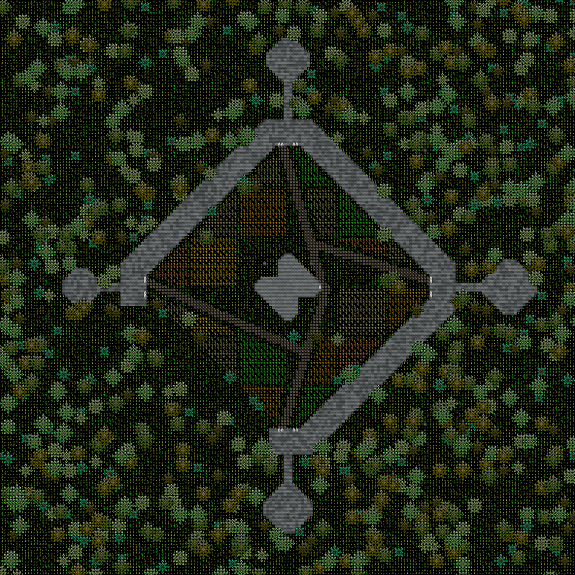 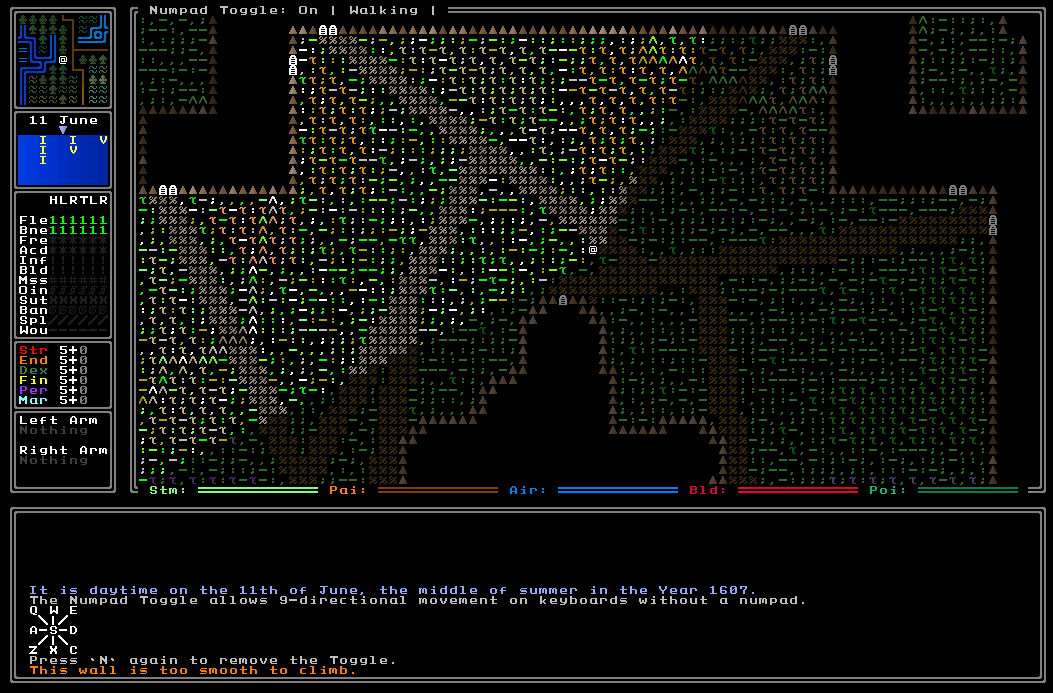 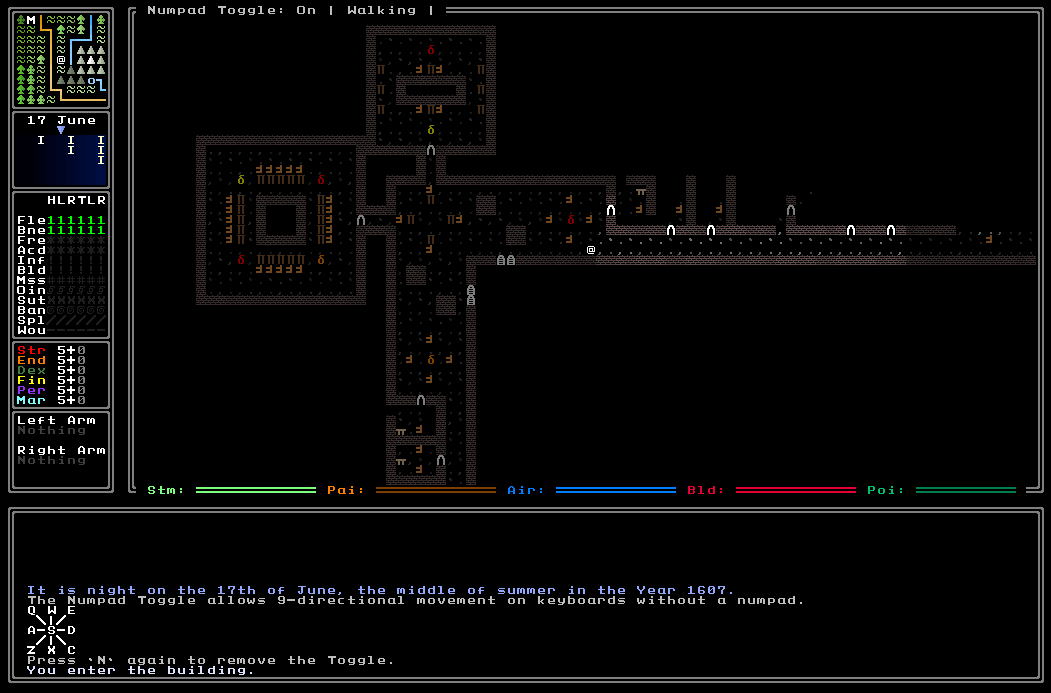 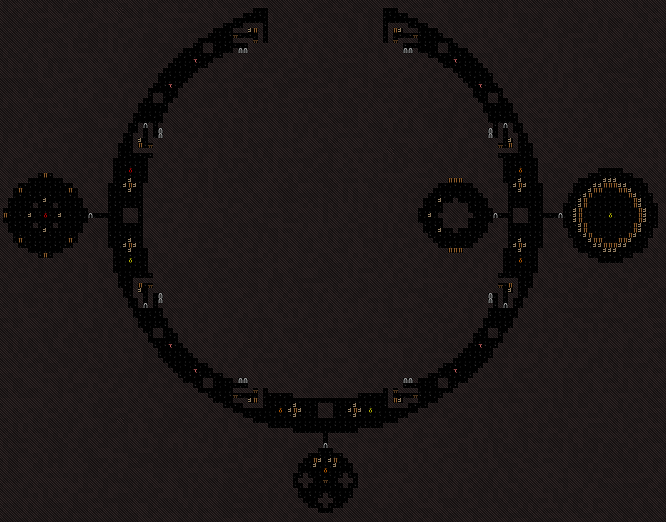 I find myself with a quandary. Everything to do with NPCs and their schedules, behaviour, appearance, etc, will be finished, at the latest, by the end of next month. However, one will not be able to interact with NPCs at this point: there will be no conversation system. At this point my intention is to continue working on this release until the conversation system is fully implemented and as deep/detailed as I want it to be, and thereby make this the largest (in terms of time invested) release URR has ever had, so looking to release in Oct/Nov. As the first gameplay release, this seems appropriate on some level – I want the first gameplay release to have a lot to do (or at least a lot of people to talk to!) rather than a little. On the other hand, I do strive (with mixed success) to release new versions as rapidly as I can. So: what does everyone think? Right now I feel I’d rather save up both NPCs and conversations for one massive first gameplay release, rather than make NPCs 0.8 and conversations 0.9, as I think a world full of NPCs you can’t interact with will feel rather peculiar… but I’d like to hear your thoughts.

Next week… I have no idea. Something involving NPCs in some way. See you then! In the mean time, you can keep up to date on my devlog, Facebook page, or Twitter!

i would just liketo see the buildings right now XD

The buildings are there already in the current version! It's the NPCs which are new at the moment :)

There is some similarity visually - as with all ASCII roguelikes - but my design objectives, gameplay, and use of ASCII are widely different. DF is a physics simulator, first and foremost: URR is a culture simulator and a procedurally-generated mystery.