Details about the new update to the first person shooter \ space simulation hybrid. Where you manually operate a ship from the inside.

After a year of its original release, I've finally made a huge update to SpaceJourney in Version 1.2. The nitty gritty details of what I added to the game have been included in the description for the download. But down below I've included the gist of what I've changed.

For those of you who haven't heard of SpaceJourney, it is a sandbox game that combines first person shooting, space simulation and adventure elements.

You're basically a space captain in a ship piloted by only yourself. And there are plenty of dangers out there in that big unknown wanting to either eat or destroy you. You can walk inside your ship, walk outside of it (using anti-gravity) and walk around locations you've docked at (so far I only have a measly little space station you can tromp around in, but its better than nothin' right?). There are enemies that you'll fight with your gun (i.e. spiders, blasting meteors, etc) in the style of a first person shooter and enemies you'll fight ship to ship with your vessel's defense and weapon systems, in the style of tactical combat games. 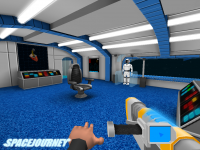 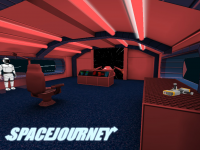 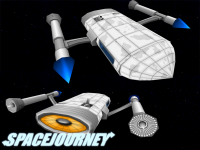 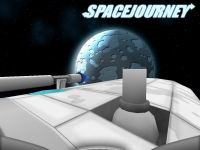 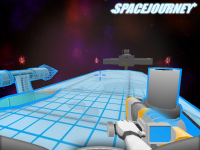 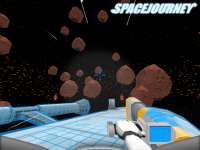 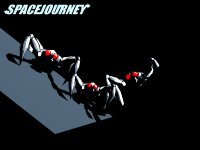 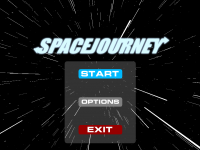 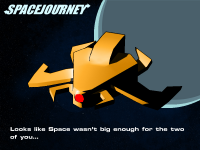 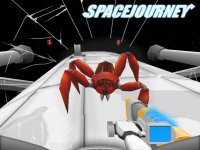 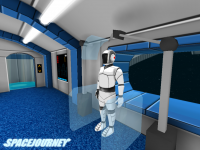 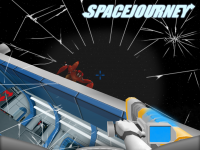 As for the gist of the new updates-- I've made major graphical updates to game (ship, laser gun, environment), as a general drift to a more stylized artistic direction. I've made attempts to make the game more accessible (with some in-game directions and a help screen) as well as some basic features (sound effects, options screen, help screen, 1024x768 resolution) and lastly some bells and whistles (particle effects, a puzzle, scanning items, etc).

Right now SpaceJourney combines both first person shooting \ action and space simulation. However I would like to expand scope to include some light RPG and Adventure elements. Being able to communicate with fellow ships, the player could engage in trade using a centralized currency. There could also be larger quests and more problem solving \ puzzles. But here is a run down of more specific features that I'd like to put into the game (order of which is going to be seen in the game the soonest):

Your game looks great but you dont have a website?

So far the indieDB and Facebook pages are as official as a website can get. Mostly because indieDB is already a good system for posting updates and getting noticed in return.

Facebook is another good tool for networking and getting the word out. Here is a link to the facebook page: Facebook.com

Simply amazing.Waited this for a long time.Do you guys thinking multiplayer?Or SP?Both works for me but coop would be great.Or every played can have their ship fly together :D Anyway keep up the good work!Tracking!

Thank you so much! I'm very grateful for the compliments.

So far Single Player is the main goal. But down the road co-op wouldn't be out of the question. This version of the game is just scraping the surface in terms of possibilities!

I will download and testing, I present my report soon

Thank you very much! I look forward to your report!

And feel free to be honest, it can only make the game better!

Since English is not your native language, I had to use a website to translate your message into English. So I apologize if there are any major communication issues.

Thank you for the compliment about the gameplay. And yes, it is very much meant to be like a simulator. And no problem for the delay, I should also apologize for my delay.

P.S. Sorry I didn't see the other parts of your message. If the game is running slow for you, it might be a line of code I messed up on to optimize the game. I will focus on the performance of the game in the next update. Also, you can adjust your walk speed in the options menu.

Ship communication will be in the future updates. Others have suggested that you can float out in space. I will let you know as well if I decide to implement this. Many thanks again!